Trastuzumab is a clinically approved monoclonal antibody therapy which targets HER2 (or ErbB2) for treatment of HER2-overexpressing breast and gastric cancers. Safety studies are important in the development of antibody therapeutics and should use animal species which bind the target antigen (HER2) to understand target-mediated effects, in addition to a non-binding species to observe non-targeted effects. It is acknowledged that trastuzumab does not bind to the rodent equivalent of HER2 (called ‘neu’), but researchers still use rodent species to study toxicities of trastuzumab-based therapeutics. In their studies, Dr Gail Lewis Phillips and colleagues from Genentech Oncology demonstrate how future safety studies for trastuzumab-based therapeutics should be conducted to generate better understanding of toxicities, and to potentially reduce animal experimentation.

Human epidermal growth factor receptor 2 (HER2 or ErbB2) is a cell surface protein in a complex signalling network which stimulates cell growth. ErbB2 is especially important in cardiac tissue, as it is essential in cardiac foetal development. ErbB2 is also expressed in epithelial tissues at low levels in healthy adults. However, in a proportion of breast cancers and other solid tumours, HER2 is highly overexpressed. Such cancers are often associated with increased tumour growth rates and a poorer prognosis in patients with such malignancies, thus presenting a significant health burden. Fortunately, there are several approaches which have shown great efficacy in targeting HER2 therapeutically, including humanised monoclonal antibodies (MAbs), antibody–drug conjugates (ADCs), and small molecule kinase inhibitors.

Safety studies
Safety studies are routinely conducted during drug development to assess the safety/toxicity of preclinical and clinical drug candidates. During therapeutics development, understanding the mechanism of action of a drug and any associated toxicity is vital. In safety assessment of monoclonal antibody therapy, it is important to use a species which is similar enough to humans (known as a binding species) so that the antibody can bind to the drug target and demonstrate if there is efficient binding of the antibody and if there are any associated adverse events (ie, toxicities). Additionally, for some therapeutics it is equally important to use a species in which the antibody does not bind to the drug target (non-binding species); this allows researchers to see if there are any potential toxicities which are not caused by the binding of the antibody (target-independent events). In most cases, the antibodies which bind human/primate antigens do not bind to the equivalent antigen in rodent species, therefore rodents are usually used to assess target-independent safety and non-human primates are used for target-dependent safety signals.

Monoclonal antibody therapies
Trastuzumab and pertuzumab are clinically approved humanised monoclonal antibodies used in the treatment of HER2-positive (or HER2-overexpressing) breast cancer. Trastuzumab and pertuzumab were first developed as mouse MAbs which recognise human HER2, but later made into human antibodies (‘humanised’) for administration to patients. It is important to note that both the mouse forms and the humanised antibodies (trastuzumab and pertuzumab) bind human/primate HER2 and not the rodent ErbB2 equivalent, neu. This is due to amino acid sequence differences in the antibody binding sites in human vs rodent HER2/neu. Previous researchers have found these amino acid differences between neu and human HER2 prevent binding of pertuzumab to rodent neu.

An alternative therapy also approved for treatment of HER2-positive breast cancer is the use of trastuzumab-based ADCs, including trastuzumab emtansine (or T-DM1). ADCs are emerging therapeutic agents which combine monoclonal antibodies and cytotoxic agents (agents which are toxic to the cell). For example, T-DM1 consists of trastuzumab adjoined to DM1, a microtubule inhibitor, which binds to cell structures called microtubules and prevents cell division and causes cell death. T-DM1 selectively delivers the cytotoxic agent DM1 to tumour cells overexpressing HER2.

Selectivity binding and biological studies of trastuzumab
The team first generated a series of monoclonal antibodies against neu, called anti-c-neu monoclonal antibodies (MAbs). Using a live-cell fluorescence-activated cell sorting (FACs) assay, they determined that the monoclonal antibody 2009 (MAbs 2009) had comparable or better binding to neu than a standard anti-neu antibody (MAb 7.16.4). Consequently, MAb 2009 was used in analyses in this study in addition to Mab 7.16.4. To assess and compare trastuzumab and Mab 2009 binding to cell surface HER2/neu in human vs rat/mouse cell lines, the team used FACs and Scatchard techniques. FACs uses fluorescently-labelled antibodies to distinguish and separate cell types based on their different light-scattering and fluorescent properties, and can be used to give information about antibody–receptor binding. This analysis revealed that trastuzumab only showed strong binding to HER2-positive human breast cancer cells but not neu-expressing rat/mouse cell lines. This demonstrates that trastuzumab has selective binding to human HER2 and not rodent neu. To further confirm trastuzumab binding, immunoblot analysis (a sensitive binding method which detects proteins using antibodies specific to these proteins) was performed. Trastuzumab was seen not to immune-precipitate neu (interact or bind with neu) in the rat cell line, which contrasts with previous reports. It was also important that trastuzumab immune-precipitated HER2 (interacted with HER2) in human cell lines, thus verifying the findings from FACS analysis. In addition, immunohistochemistry (IHC) was used to stain and detect HER2 and neu. In support of FACs and immunoblot findings, muMAb4D5 (the murine parent of trastuzumab) stained cells overexpressing HER2 but did not react or stain cells overexpressing neu, indicating and confirming the selectivity of trastuzumab to human HER2 and not rodent neu.

A radiolabelled binding assay is a more sensitive method used to assess binding abilities of trastuzumab, by using what is known as a radioactive ligand, which like FACS has the advantage of using live intact cells. To assess high specific binding to human HER2 or rodent neu, trastuzumab and Mab-2009 were radiolabelled with 125Iodine (125I-trastuzumab and125I-MAb 2009, respectively). Analysis was performed on HER2-amplified human breast carcinoma lines which overexpress HER2 or rat cells overexpressing neu. Scatchard analysis was used to determine the number of receptor binding sites and the affinity of the antibody for the receptor. While 125I-trastuzumab demonstrated high affinity binding to HER2-positive breast cancer cells, 125I-trastuzumab binding was not detectable in neu expressing DHFR-G8 cells, which supports findings that trastuzumab does not bind to rodent neu. This is consistent with IHC, FACs and immunoblot data which shows that trastuzumab does not bind to neu-expressing rodent cells nor the neu receptor.

The research team provides evidence that trastuzumab does not bind to rodent neu and that T-DM1 effects in liver cells are not HER2-mediated.

Safety of trastuzumab-based therapies
One of the adverse events in patients treated with T-DM1 is hepatotoxicity. To explore T-DM1-induced hepatotoxicity, human hepatocytes (liver cells) were treated with T-DM1 to assess uptake into hepatocytes (which relies on trastuzumab binding), breakdown of T-DM1 by hepatocytes, and T-DM1 effects on cell viability (cell health). Trastuzumab did not affect hepatocyte viability, but both T-DM1 and a non-HER2-targeted ADC (anti-gD-DM1) caused a 15% reduction in hepatocyte viability, albeit at concentrations far higher than T-DM1 concentrations known to kill HER2-positive breast cancer cells. However, the lack of differences in uptake between T-DM1 and anti-gD-DM1 suggests that reduction in cell viability was not due to HER2-mediated uptake. Furthermore, no differences between catabolite levels (breakdown products) of T-DM1 and anti-gD-DM1 were noted.

The similar catabolite levels found in hepatocytes treated with the targeted ADC (T-DM1) and the non-targeted ADC (anti-gD-DM1) provides further evidence that the liver toxicity is not HER2-mediated in human hepatocytes. Furthermore, hepatocytes express exceedingly low levels of HER2, making it highly unlikely that there is HER2-mediated uptake into these cells. These data highlight the importance of using a non-targeted control ADC to explore the safety and toxicities of trastuzumab-based antibody-drug conjugates.

Overall, the research conducted by Dr Gail Lewis Phillips and her research team provides evidence that trastuzumab does not bind to rodent neu and that T-DM1 effects in liver cells are not HER2-mediated. This research emphasises the importance of comprehensive and thorough investigations to understand drug–receptor binding properties, to ensure appropriate selection of animal models employed to study drug toxicities and mechanisms of action. Overall, the study has important implications for safety models and safety study design for trastuzumab‑based therapeutics. Moreover, it suggests the use of such assays may help reduce the use of animals in experimentation.

Could the use of more in vitro techniques be applied to any other therapeutic area to reduce the number of animals used in experimentation?

The use of multiple in vitro techniques for antibody and ADC therapies can reduce, but not eliminate, the use of animals for safety studies. These techniques include sensitive binding assays (IHC, FACS, Scatchard) in cells from different types of animals, as well as binding, uptake and catabolite identification in tumour cells and cells from potential target organs of toxicity. These studies should ideally be performed in cells from multiple animal species and with the appropriate control treatments. 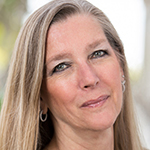 Dr Gail Lewis Phillips is translational research lab head in Genentech Oncology. Her work focuses on investigating receptors as targets for cancer therapeutics. Her early research focused on the biology of anti-HER2 antibodies for HER2-amplified breast cancer. Subsequently, her work led to the development of antibody-drug conjugates (ADCs) designed to deliver cytotoxic agents to tumour cells. Focus areas have expanded to include exploration of different targets in both solid and haematologic tumours as well as novel drugs for ADCs.