Monoclonal antibody therapy (MAT) is a way of treating COVID-19 for people who have tested positive, have mild to moderate symptoms, and are at high risk of developing more serious symptoms and complications. Although there are already studies showing promising results, the number of patients in the US, especially ethnic minorities, who have so far received MAT is small. Dr Nikhitha Mantri along with a team of researchers at BronxCare Health System, conducted a study with the aim of examining the advantages and the practicality of MAT in an inner-city hospital with limited resources.

The ongoing global pandemic of COVID-19 disease is caused by the severe acute respiratory syndrome coronavirus 2 (SARS-CoV-2). As of January 2022, the pandemic has caused more than 307 million cases and 5.49 million deaths, making it one of the deadliest in history. The fact that the disease has been shown to affect ethnic minorities disproportionately has amplified the need to focus on their individual characteristics and treatment requirements.

A recent study by the US Centres for Disease Control and Prevention (CDC) showed there is a racial and ethnic disparity in the receipt of medications for treatment of COVID-19. The study showed that Black and Hispanic patients received lower rates of monoclonal antibody therapy as compared to the white population. This ongoing study involving nearly 100 patients included mostly ethnic minority populations, as the hospital primarily caters healthcare to the under-served and minority population.

Monoclonal antibody therapy
The most recently approved treatments for COVID-19 in the US, the UK, and other parts of the world include antiviral pills (such as Molnupiravir and Paxlovid) and monoclonal antibody therapy (MAT). MAT is a way of treating the disease for people who have tested positive for COVID-19, have mild symptoms, and are at high risk of developing serious complications. Monoclonal antibodies are antibodies (proteins used by the immune system to identify and neutralise foreign objects such as bacteria and viruses) made in the laboratory by cloning a unique white blood cell. They have so far been used in medicine to treat a number of diseases such as a variety of cancers and autoimmune diseases (diseases caused by an abnormal immune response against a part of the human body).

The study showed benefits from the MAT when it came to patient deaths and admissions to hospital.

With COVID-19, the monoclonal antibodies target the receptor binding domain (RBD) of the SARS-CoV-2 spike protein. This protein is used by the virus to attach itself to the host cells (cells lining the upper and lower airways) by binding itself to special cell receptors called angiotensin-converting enzyme 2 (ACE2) receptors.

One of the treatments capable of binding to the virus RBD and blocking viral entry into the host cells is Bamlanivimab (also knowns as LY-CoV555 or LY3819253). The United States Food and Drug Administration (FDA) issued an emergency use authorisation (EUA) for the use of Bamlanivimab in 2021. This EUA has recently been revoked for Bamlanivimab monotherapy due to the emergence of resistant strains. However, the FDA recently approved the use of a combined treatment of newly available MAT treatments, such as Casirivimab-Imdevimab (CAS-IMD), or Bamlanivimab-Etesevimab (BAM-ETE). Clinical trials of MAT in mild to moderate COVID-19 demonstrated promising outcomes in preventing progression to severe disease in patients with high risk factors and consequently led to fewer hospital visits and admissions.

The BronxCare study challenge
In order to examine the efficiency and the practicality of MAT in a hospital with limited resources such as the BronxCare Health System, Dr Nikhitha Mantri and Dr Sridhar Chilimuri led a retrospective observational study involving 49 adult patients who were diagnosed with mild to moderate COVID-19 from November 27 2020 to March 17 2021.The diagnosis of COVID-19 was confirmed using the real-time reverse transcriptase polymerase chain reaction (RT-PCR) test of SARS-CoV-2 on nasopharyngeal swabs.

Patients who were included in the study had to present with symptoms of less than ten days duration, and had to suffer from one or more high-risk conditions for progression to severe disease. The criteria for high-risk of disease progression included body mass index (BMI) greater than or equal to 35kg/m2, chronic kidney disease, diabetes, immunosuppressive disease, current immunosuppressive treatments, or the patient being 65 years of age or older. High-risk groups also included patients over 55 years of age with heart disease, high blood pressure, or long-term respiratory disease. Patients who required admission to the hospital with severe disease, patients requiring oxygen, and patients with increasing oxygen requirements who were on long-term oxygen therapy for other causes, were excluded from the study.

Out of these 49 patients, 38 received MAT treatment and 11 declined MAT. In the treatment group, 16 received the BAM monotherapy (700mg) and 22 received the CAS-IMD therapy (1200-1200mg), since both BAM and CAS-IMD infusions had been in use at that time based on availability. Patients with mild to moderate disease with risk factors, who were offered a MAT infusion but denied, served as a control group.

Identifying extra space isolated from other non-COVID-19 patients was a significant challenge in the hospital, since it is a traditional infusion centre and had many immunocompromised patients who were being treated at the same time for their individual diseases. Despite the limited resources, a comprehensive and successful monoclonal antibody infusion programme was created by a dedicated team of doctors and other healthcare workers. The team’s initial focus was also on the education of primary care and fast-track emergency room physicians.

Data on demographics, co-morbidities, laboratory test results, and medications were obtained from electronic medical records. All patients were followed up for 30 days via telephone appointments or clinic visits.

MAT is effective when given early
The median age groups for BAM and CAS-IMD groups were 70 years and 65 years respectively, with both groups having more female than male patients. The majority of the patients were Hispanics (60.5%) followed by African Americans (23.7%), Caucasians (10.5%) and Asians (5.3%). Patients in both groups were on average overweight, while high blood pressure and diabetes were the most common risk factors in both groups.

The team feels there is still work to be done to more accurately define the benefits of MAT in minority Hispanic and African American populations in the US.

The two different types of MAT treatments used in the study had similar results. Unfortunately, the data obtained for the control group was restricted to hospitalisations and deaths, however it was adequate to suggest a significant reduction in COVID-19 related hospitalisation and deaths for the patients that had the treatment. In addition, the majority of patients (76.3%) reported early improvement of symptoms, a finding similar to previous studies’ results. It is perhaps worth noting that three of the 38 patients treated with the infusion presented later (eight to nine days) after the symptoms’ onset. This potentially means that a delay in MAT administration after COVID-19 symptom onset may affect the result of the treatment.

Are current MATs treating Omicron?
In light of the recent revocation of BAM as a treatment on its own due to the appearance of BAM-resistant strains, the study results cannot be used to promote a treatment consisting only of BAM. The current standard treatment is the newer MATs like Sotrovimab (SOT), BAM and ETE, or CAS and IMD. The study performed by Mantri and the team at BronxCare showed the benefit of MAT treatments when it comes to patient deaths and admissions to hospital for their predominantly Hispanic patients with a high burden of risk. It seems an early administration of MAT may have influenced this favourable outcome. Nearly 100 patients have been treated in their health system, including those with autoimmune diseases and immunosuppressed patients. The team feels there is still work to be done to more accurately define the characteristics and benefits of MAT in the minority Hispanic population of the US.

The new challenge that scientists all over the world have taken on is dealing with the new variants of SARS-CoV-2, and especially the Omicron strain which specifically demonstrates mutations on the spike protein RBD of the virus, potentially causing the existing MATs to struggle to work against it. The next step, besides the development of a more effective vaccine against the strain than those currently available, would most likely be to test the efficacy of existing MAT in patients affected with the novel Omicron strain, and potentially work on the development of new and more antigen-specific monoclonal antibody treatments.

Is your team planning to conduct a bigger and more detailed study in order to assess the new standard treatments on the Omicron variant?

Yes. Our team is expanding the study using the newer monoclonal antibodies like Bamlanivimab-Etesevimab and Sotrovimab. At present, we are unable to test for the variant due to technical limitations, however, we continue to provide the necessary treatment including monoclonal antibodies administration to patients. We are planning on publishing the outcomes shortly. 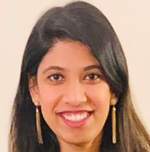 Nikhitha Mantri was born in Visakhapatnam, India. She completed her MBBS at SDM Medical College, India. She then pursued residency in internal medicine and is currently doing her fellowship in gastroenterology at BronxCare Health System, affiliated to Icahn School of Medicine, Mount Sinai, New York.

Dr Nikhitha Mantri at the BronxCare Health System studied the advantages of MAT therapy in an inner-city hospital.