Sensors built from microscopic optical components could offer numerous benefits, but so far their reach has been limited by shortcomings in 3D manufacturing techniques on non-conventional platforms. In their research, Dr Hengky Chandrahalim, Capt Jeremiah Williams, and colleagues at the US Air Force Institute of Technology, have overcome this challenge through the technique of ‘two-photon polymerization’, which allows them to integrate microscopic mechanisms into their sensor designs. Already their approach has proved to substantially improve the performance of optical cavity sensors – potentially allowing them to monitor a diverse range of environmental factors in a multitude of aircraft applications.

Modern fighter jets are not only impressive feats of aerospace engineering – they also feature cutting-edge electrical components. As these aircraft carry out complex manoeuvres in fast-paced, often dangerous scenarios, it is crucial for them to rapidly measure a wide array of factors in their surrounding environments – including air quality, temperature, and atmospheric pressure – using sensors inside their cockpits.

To keep the aircraft manoeuvrable, these advanced sensors must be as compact as possible. Yet as fighter jets – and other technologies such as military drones, autonomous underwater vehicles, and micro satellites – become ever more agile, it is becoming increasingly difficult for this sensing technology to keep pace.

To solve this problem, researchers are now looking to the latest advances in optical technology. Instead of controlling the flow of electrical currents, these devices operate by carefully manipulating the flow of light. Ideally, they allow devices like atmospheric sensors to capture and process information using equipment just hundreds of nanometres (nm) in size – on the scale of the wavelengths of visible light.

In many cases, however, it remains challenging to fabricate these components with the accuracy required to capture detailed information on such small scales on non-standard substrates. Through their research, Dr Hengky Chandrahalim, Capt Jeremiah Williams and their colleagues at the US Air Force Institute of Technology aim to overcome this challenge using the latest advances in 3D nanoscale manufacturing. They have developed a microsystem that consists of a 3D sensing element on the tip of a flexible platform – an optical fiber. These work together synergistically to perform a number of different sensing tasks.

It remains challenging to fabricate these components with the accuracy required to capture detailed information on such small scales on non-standard substrates.

A central component of the team’s efforts is a 3D sensing element named the ‘Fabry–Pérot optical cavity’ (FPC). It features a pair of parallel, highly reflective mirrors which each allow a small amount of light to pass through, and are separated by a small, carefully chosen distance. During operation, some visible light travelling parallel to the mirrors flows into the cavity, then bounces back and forth between them.

By varying either the space between the mirrors, or the properties of the space separating them, the cavity’s surrounding environment can alter the interference between incoming light and the light bouncing between the mirrors. When in ‘resonance’, these two waves will constructively interfere with each other, and the light reflected away from the first mirror is cancelled out – meaning only waves of specific wavelengths can pass into the cavity.

In principle, by monitoring the wavelengths that cause the FPC to resonate, researchers could use the cavity to accurately measure a wide range of factors in their surrounding environments. Yet as they attempted to fabricate this sensor for themselves, Chandrahalim and his colleagues identified several key manufacturing challenges which have so far prevented it from attaining accurate measurements.

In their initial designs, the researchers aimed to build a 3D optical cavity sensor on a flexible platform – the tip of an optical fiber – allowing users to precisely control the wavelengths of light flowing into the cavity. Measuring little over 50 micrometres (μm) across, the device featured intricate details which would have been virtually impossible to recreate using more traditional microfabrication techniques – like those used to build the individual components of computer transistors.

In a 2020 study, Chandrahalim’s team overcame this problem with an innovative new fabrication process. Their approach was based on an effect named ‘two-photon polymerization’ (2PP), initiated by an ultra-short, highly focused laser pulse. As the name suggests, the process involves causing atoms in light-sensitive materials to absorb two photons simultaneously, pushing them into highly excited states. Subsequently, this triggers drastic chemical changes in the material, causing molecules to join into long polymer chains.

In this case, the researchers used 2PP to sculpt the FPC out of a small sample of resin deposited on the end of the optical fiber. They then removed the resin that hadn’t been polymerised by the laser – leaving behind intricate 3D structures with features as small as around 100nm. All these details could be sculpted from a single piece of polymerised resin, creating a monolithically integrated microsystem with no further assembly required.

Altogether, 2PP can be carried out without any need for complex optical setups, making it quick, simple, and inexpensive compared with other microfabrication processes. Yet despite these advantages, Chandrahalim’s team faced one further challenge: they still needed to deposit reflective coatings onto the inward-facing sides of the two mirrors, which were obscured from direct view.

In their latest study published in 2022, the researchers addressed this problem by integrating microscopic mechanical components into the FPC sensor. Their new design featured a simple hinge, which allowed the cavity’s top mirror to flip open and closed, and a latch which kept the mirror firmly in place once the device was closed.

When open, the team could readily access both mirrors in the cavity – allowing them to deposit reflective surfaces using a technique named ‘magnetron sputtering’. Using commercially-available tools, they first converted a small amount of gold into a plasma of charged ions and electrons. Using strong electric and magnetic fields, they then guided these ions onto the mirror surfaces where the material solidified forming a pair of thin gold films.

Once sputtering was complete, the team could simply close and latch the top mirror, completing the optical cavity. With this approach, Chandrahalim and his colleagues could fabricate mirrors with a far higher quality than before: when the cavity was in resonance, it retained far more energy than previous designs as the waves inside completed a full cycle of oscillation.

To demonstrate these drastic improvements, the team next used their FPC as a sensor for both temperature and refractive index. To measure changing temperatures, they suspended the cavity on its optical fiber tip above a hotplate, which heated the surrounding air from room temperature up to over 50°C.

As they varied the hotplate’s temperature, they found the resonant wavelengths in the cavity shifted in response. Encouragingly, the device was sensitive enough to pick up wavelength changes of under 0.4nm per 1°C change in the surrounding temperature.

The innovative FPC design on flexible platforms could soon become widely used as a simple, compact, yet highly accurate sensor.

Secondly, Chandrahalim’s team measured changes to the refractive index of fluid inside the cavity. This time, the FPC’s resonant frequency would vary since light travels at different speeds when travelling through different fluids. In the experiment, they immersed the FPC sensor in a mixture of water and isopropyl alcohol, allowing the liquid to fill the space between the two mirrors.

By varying the concentration of alcohol in the mixture, the researchers increased the ratio between the speed of light in a vacuum and its speed inside the fluid, from 1.351 to 1.377. Once again, they observed clear shifts in the cavity’s resonant wavelength, which increased by around 34nm as they raised the refractive index.

These results are already incredibly promising, suggesting that the innovative design of an FPC on a flexible platform could soon become widely used as a simple, cheap, compact, yet highly accurate sensor suitable for a variety of applications including, critically, those where space is either limited, a challenging shape, or difficult to access. The flexibility of the fiber is key to the success of the new system, enabling the integrated sensing element to be positioned virtually anywhere in geometrically challenging applications – in fact many hundreds of sensor arrays can easily be accommodated in a very small space.

This combination of design and 3D manufacturing innovation represents a breakthrough by Chandrahalim and his team, superseding the capabilities of current approaches to integration and fabrication. So far, the team’s experiments have only showcased a small fraction of the technology’s full capabilities.

In their latest study, Chandrahalim and his team describe an array of factors which could vary the resonant wavelength of the cavity, including magnetic field strength, airflow, humidity, and pressure from sound waves. By further adapting their techniques to capture the often subtle influences of these factors, the researchers now hope that the FPC sensor’s use in real-world applications may not be too far away.

The device could be readily integrated into fighter jet cockpits and, more broadly, the micromachined cavity could improve sensing capabilities across applications as wide-ranging as weather forecasting, medical imaging, and seismic monitoring. By expanding the team’s use of 2PP to fabricate microscopic mechanisms, Chandrahalim and his team hope their integrated 3D sensor may soon be expanded to an even broader range of technologies.

What are the broader impacts of this research?


This research enables a new technology to realize high-performance multifunctional optical sensing and signal processing elements that have a great degree of freedom and compact and flexible form factors. At higher Technology Readiness Levels (TRLs), these integrated optical and optomechanical microsystems can be used to remotely monitor different phenomena, such as electromagnetic, acoustic, and particle radiations, changes in displacement, rotation, and acceleration, temperature fluctuations, presence of hazardous materials in different forms (solid, liquid, and gas) and transmit the detected information via low-loss optical fibers or wirelessly via radio frequency (RF) transmitters.
Two-photon polymerization for advanced sensor manufacturing was last modified: October 5th, 2022 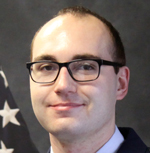 Capt Jeremiah Williams was the student lead of this work. He is currently an electronic device engineer in Sensors Directorate of the Air Force Research Laboratory. 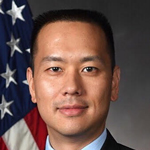 Dr Hengky Chandrahalim is a faculty in the Department of Electrical and Computer Engineering at the US Air Force Institute of Technology (AFIT). He is the director of the AFIT Nanofabrication & Characterization Facility and an editorial board member of Royal Society Open Science.

Chandrahalim and his team aim to overcome the challenges of manufacturing 3D compact sensors on flexible platforms by drawing on the latest advances in nanoscale engineering.

This work was funded by the Air Force Office of Scientific Research (AFOSR), Grant F4FGA08338J001