Earth & Environment
Intact, water-logged peatlands are a stable store of the world’s carbon, but if drained they can become near perfect (organic) soils for growing high-cost vegetables. It was thought that you couldn’t cultivate a peatland without ruining it and releasing its carbon into the atmosphere. Dr Jacynthe Dessureault-Rompré, with her team at Laval University in Québec, Canada, has been investigating whether other plant content and its associated microbes could be used to keep the veggie patch going for the long term. Can this potential environmental catastrophe be turned into a garden of Eden?

We are all told to eat more greens to improve our health, and there is increasing interest in vegetarian diets, but any keen veggie grower will tell you that you need soils that are particularly rich in compost to get a good crop. There is a reason that we reach for a grow bag for our tomatoes and lettuce: if you were to plant them into mineral soils with a low percentage of organic matter, they are unlikely to thrive.

A fragile ecosystem
Peatlands make up 2.8% of the total land surface area of our planet, the bulk of which are in Asia and North America. Peatlands have been preserved by being totally water-logged for thousands of years. Just drain away some of that water and you have a perfect growing medium – but of course, there is a catch. As soon as the soil is drier the peat can be blown away in the wind, or get compacted, and once air gets into the structure, microbes start to thrive and rot it away. This releases vast quantities of carbon into the air. It is no good going vegetarian to reduce your carbon footprint if growing your greens is so environmentally unfriendly.

In Canada, the aim is both to minimise the area of peatland used for agriculture, and also to extend its productive lifespan. Canada boasts 113.6 million hectares of bogs that contain peat, one of the best composts available. Most of this land remains protected, yet even though only 0.03% of the bogs have ever been used for crop growing, up to 80% of Canadian lettuce is grown in cultivated peatlands. These growing areas are mostly clustered in southwest Québec where the climate is favourable, and they are close to the hungry markets of Montréal and the east coast of the United States. In southwest Québec, the initial peat layer is between 210cm and 60cm deep. If no mitigation steps are taken, then about 3-4cm of the peat layer is lost each year. In some areas, the depth of soil is now down to just 30cm.

Until recently, it was thought that we had to make a choice between sustainability and growing crops in these habitats.

Shockingly little research has been done on these cultivated peatlands compared to the equivalent work undertaken on mineral soils. Until recently, it was thought that we had to make a choice between sustainability and growing crops in these habitats. Peatland was seen as a one-off resource that you used up and then repurposed the land for something else. Dr Jacynthe Dessureault-Rompré and her colleagues at Laval University, Québec, are looking for ways to keep vegetable production on peatland going for the long haul, by limiting wind erosion and maintaining the soil’s carbon content.

Can phytotechnology save the day?
Dr Dessureault-Rompré specialises in phytotechnology (the use of plant matter and associated microbes) to make agricultural systems more sustainable. Can adding other plant material compensate for all that carbon being released?

By increasing our understanding of the flow of carbon, nitrogen and phosphorous between the dead plant matter in the soil, the living plant matter in any crops, the surrounding water and the air, she hopes to perform the ultimate juggling trick of balancing things up to ensure that a peatland can go on producing vegetable crops year on year. Dr Dessureault-Rompré and her research team use the full range of laboratory, greenhouse, and field studies to get answers as quickly as possible. Despite the difficulty of working on such complex interconnected systems, three land-restoration options already look promising.

The first option entails growing a biomass crop like Salix miyabeana (willow) or Miscanthus X giganteus on the site. When a peatland area has become very degraded (often starting around the edges), one possible first step to bring it back from the brink is to grow plants that are particularly good at producing plant matter rich in carbon. These biomass crops are often woodier species like willow or the bamboo-like grass, Miscanthus X giganteus. Once established with these plants, the land starts to look a lot bushier and this higher structure can help to increase wildlife diversity, protect the peat lands in the middle of the area from further erosion and help improve soil conditions under the peat layer.

As a second option, the very same ‘biomass crops’ mentioned above could be harvested, dried and shredded into chippings that could be added to peatland that is still in better condition. Dried plant matter is a good choice for growing fresh veg since alternatives like manure and sewage sludge are understandably banned by various food safety programs.

Mesh bags with the chippings were buried in the peatland and their decomposition was measured with time. The rate of rotting was fastest in the first six months and then slowed as the microbes struggled to break down the tougher parts like lignin. Predictive modelling suggests that 15 tonnes per hectare (T/ha) of Miscanthus chippings would be needed to mitigate against a carbon loss of 4.5 T/ha yearly from the peatland. Smaller amounts may suffice if other measures are also taken. The researchers also observed from a greenhouse study that incorporating straw and wood chips into cultivated peatlands can compensate for carbon losses. However, this immobilises nitrogen, which is then protected from leaching and may need to be rebalanced to optimise the fertility of the soil.

By increasing our understanding of the flow of carbon, nitrogen and phosphorous, Dr Dessureault-Rompré hopes to ensure that a peatland can go on producing vegetable crops year on year.

The third option is to grow a rye cover crop, which is then scrolled into the soil before planting the main vegetable crop. Field trials that include the cash crop are ultimately the most accurate way to assess a growing technique; it is no good maintaining soil carbon content if your carrots fail to put on weight. One of the most ambitious techniques trialled by Dr Dessureault-Rompré’s group so far was to grow a mulch crop of rye immediately before sowing a lettuce crop. The rye was planted in autumn, then chemically killed and scrolled the following summer, before sowing the lettuce.

High potential gains from this technique are enticing: the rye crop might supress the growth of unwanted weeds; help water seep into and be held in the soils; reduce erosion; and again add back that valuable carbon. Making predictions of the outcome is a real challenge though: for example, if your rye grows too well, will there be any nitrogen left available for the lettuce?

Two field trials were undertaken and preliminary results indicate that, provided the rye isn’t allowed to grow too vigorously and the cash crop is one that doesn’t need particularly high nitrogen levels, then this technique might be an excellent option for farmers.

Do cultivated peatlands have a secure future?
If we can make peatland cultivation sustainable, then the potential benefits to growers, shoppers and all of us sharing this planet are plain.

Do you think the options for peatland preservation that you discovered will be implemented in the near future?

<>The 14 farms with which we collaborate have already started to implement those conservation strategies (cover cropping, f.e. rye, biomass growth and plant-based amendment), at a small scale. We hope that within the next 10 years, growing biomass, amending soil and cultivating vegetables on rye cover crop mulch will become routine conservation practices for them and will have reached most of the famers in Québec and Ontario. With knowledge and science diffusion we also hope to implement or at least inspire USA and Europe peatland famers within the next 10 to 15 years. Still, to have a real carbon-balanced system in cultivated peatland a lot of work needs to be done. For example, I have a student working on field carbon and nitrogen emissions as a function of cultivated peatland properties (which varies a lot in relation to their degradation state) to understand how much carbon needs to be added to the soil. 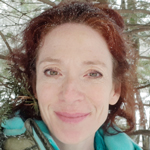 Dr Jacynthe Dessureault-Rompré has a Bachelors in agronomy, a Masters in soil chemistry (Laval University), and a PhD in soil-plant relationships from the Swiss Federal Institute of Technology. She completed a post-doc at Dalhousie University on modelisation and the nitrogen cycle, and started to study cultivated peatland in 2014. She has been a Professor at Laval University since January 2020.