The evolution of flightless birds is a conundrum that scientists are still trying to solve. Using his experience in clinical medicine, Dr Peter Johnston from the University of Auckland, New Zealand, has recently unearthed new information about the sensory adaptations of several species of flightless birds, including the now extinct moa. This work demonstrates that, in contrast to previous hypotheses, the moa was a diurnal herbivore that had an enhanced sense of smell and good hearing capabilities. These key findings provide novel information about the sensory capacities of extinct birds and can help us to understand how they evolved.

The evolutionary history of some of the largest birds to ever walk the earth has been puzzling scientists for decades. This group of flightless birds, also known as ratites, are fast runners and can count birds such as the ostrich and the emu among them. Other ratites include the cassowary, rhea, and the kiwi, as well as the moa and the elephant birds which have unfortunately become extinct. The origin of these large, flightless birds and their relationships to one another is a fascinating topic that continues to be keenly debated.

Ratites are found on each of the southern-hemisphere continents. A ratite is any bird whose breastbone, or sternum, lacks a keel to which flight muscles could attach, as a result of muscle reduction accompanying flightlessness. Previously, biologists thought that these flightless birds ended up on different continents after the breakup of the supercontinent Gondwana. However, recent research has shown that ratites had ancestors which could fly and that these birds only became flightless after they arrived on the continents on which they were found. Further, it has been suggested that the evolution of these traits occurred as the birds’ ecological niche changed and they became diurnal herbivores, feeding mostly on plants found on the ground. This was all made possible by the extinction of the dinosaurs (or at least, extinction of non-avian dinosaurs – birds are the survivors of the dinosaur lineage) which removed the predators from their environment and left an abundance of food, enabling these birds to become larger while losing the ability to fly.

Previously, biologists thought that these flightless birds ended up on different continents after the breakup of the supercontinent Gondwana.

While the evolutionary history of these birds has been extensively studied, there remain several unanswered questions. Dr Peter Johnston from the University of Auckland has applied his experience in clinical medicine to research vertebrate anatomy in order to provide answers in areas where we still know relatively little. In a recent collaboration with Dr Kieran Mitchell of the University of Otago, Johnson has looked to uncover some of the mysteries surrounding ratite birds and their sensory adaptations. The researchers examined two recent fossil lineages of flightless birds, the moas of New Zealand and the elephant birds of Madagascar, and compared them with sensory structures that were identified from skeletal evidence in living birds to understand more about these extinct birds and their sensory capabilities.

Avian evolution
A vertebrate’s head is complex, housing not only the brain but also making room for the various sensory organs which enable animals to see, hear, and smell. Due to size limitations, there is often competition for space between the various sensory organs, and it is thought this is the reason the strength of the senses varies between different animals. For example, if an animal relies on its sense of smell more than its eyesight then evolution will have favoured the olfactory organs which will be given more room than those associated with vision. This favouring of one sense over another to survive is known as a trade-off. This situation becomes even more complicated in birds, where evolution is also selecting for lightness and aerodynamic factors so that a bird can fly with ease. 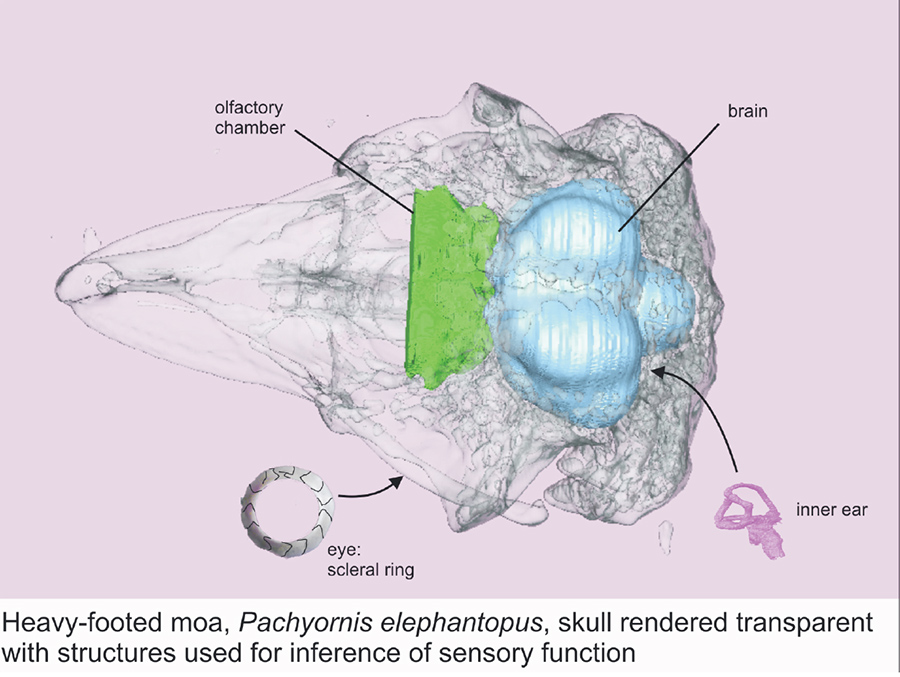 By examining the shape and structure of the head and its components, scientists can infer how a bird’s senses function in both living and extinct species and what trade-offs have been involved in their evolution. This information not only provides clarity on how a bird fits into its environment but also helps researchers to examine avian evolution as a whole. One group that can help researchers to understand these evolutionary processes are the flightless birds which evolved to be very different from the rest of their class.

In New Zealand, there are two lineages of flightless birds – the recently extinct Moa (Dinornothiformes) and the extant kiwi (Apteryx). If we were to follow the previously mentioned theories about the evolution of flightless birds, then we would assume that these birds would be more closely related to flightless birds found on other continents. However, earlier research examined the genetics of these birds and found that they are only distantly related. The kiwi is in fact more closely related to the extinct elephant birds (Aeyornithidae) from Madagascar, while the moa is the sister group of the mainly ground-dwelling but flight-capable tinamous found in South America. To understand how the flightless birds are related and what drove their sensory evolution, Johnston and Mitchell explored the sensory anatomy of the kiwi, the kakapo, and the moa from New Zealand, and elephant birds which were once found in Madagascar.

Sensory specialisations
Both kakapo and kiwi have already been studied in detail and been found to have several adaptations to being nocturnal, including limited vision, reduced visual acuity (which is the ability to distinguish shapes and other details at a given distance), as well as a reliance on their sense of smell (olfaction). This is especially noticeable in kiwis, which are the only birds in the world with external nostrils on the end of their beak. In contrast, much less was known about the sensory specialisations of the moa and elephant birds.

By examining the shape and structure of the head and its components, scientists can infer how birds senses function in both living and extinct species.

Like the kakapo and kiwi, the researchers deduced that elephant birds were also nocturnal from the very small orbit (eye-socket). In moa, the size of the cornea could be deduced from the dimensions of the scleral ring, a set of small bones that encircles the cornea in birds and reptiles; only three specimens with scleral rings are known in moa, and no scleral bones have been found for elephant birds. The small eyes of elephant birds lead to inference of a nocturnal lifestyle; in addition, elephant birds were found to have a moderate sense of smell and very limited hearing. In contrast, the researchers found that the moa had strong hearing and olfactory senses. Unlike the other birds in this study, the moa was also found to be diurnal which means they were active during the day. These last two findings were particularly interesting as previous research had led scientists to believe the opposite was true, based on information inferred from the shape of the birds’ brains.

Another fascinating finding from this study was that the kiwi does not make use of the nostrils found on the tip of its long bill. The researchers found that these nostrils were very small and were unlikely to let in much air. Instead, the kiwis’ keen sense of smell came from their ‘internal nostrils’ which are located in the roof of their mouth and connect with the olfactory sensory areas, similar to what you would observe in mammals. This is particularly interesting as this method of olfaction, known as retronasal olfaction, had not previously been considered in birds.

What’s next?
The findings from this study enable the researchers to deduce certain facts about how these birds lived and what drove the evolution of certain traits. For example, the poor vision and reduced hearing discovered in some of these birds could have occurred as a result of the birds not having any real threats from predators in their habitats until the arrival of humans, which coincided with the extinction of the moa. Moving forward, the researchers will use the information they gained from this study and compare them to findings from a new genetic study in moa and elephant birds. They hope to develop a more complete picture of the sensory function and the trade-offs between sensory capacities by examining the genes associated with the various functions by retrieving DNA from bones and eggshells of these extinct birds (‘ancient DNA’). The information that can be combined from these anatomical and genetic studies will allow a better understanding of sensory evolution and how this is related to the competition for space inside the avian head.

What is the reason behind many of these birds having such a well-developed sense of smell compared to their other senses?

Factors that have been studied include navigation, flightlessness, social living, aquatic life, and nocturnality, and all appear to have some impact, but the dominant ecological driver of use of smell is in foraging – seeking food. Reduced reliance on other senses for foraging, as suggested in our work on the structures involved, is also associated with greater reliance on smell in behavioural and ecological perspectives.

Unearthing avian evolution: What can we learn from the skeletons of flightless birds? was last modified: March 21st, 2022 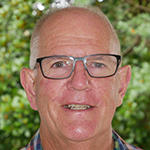 Johnston P. (2022). Unearthing avian evolution: What can we learn from the skeletons of flightless birds? Research Outreach, 129. Available at: https://researchoutreach.org/articles/unearthing-avian-evolution-what-can-we-learn-from-the-skeletons-of-flightless-birds/ (Accessed YYYY/MM/DD)