Biology
Littorina saxatilis (rough periwinkle) is often used as an example of adaptation to different ecological niches, with ecotypes adapted to life at different levels of the seashore. Professor Emilio Rolán-Alvarez and his colleagues at the University of Vigo, Spain, investigate whether one ecotype may have evolved from another by paedomorphosis. Their results indicate that, while there is some evidence in support of paedomorphism in this species, the direction of change in shell morphology across development is not consistent with a paedomorphic hypothesis. Littorina saxatilis (L. saxatilis), commonly known as rough periwinkle, is a species of marine gastropods found on the intertidal rocky shores of Western Europe. This species is commonly used as an example of adaptation, due to several ecotypes of L. saxatilis all occupying different specific niches. Prof Emilio Rolán-Alvarez and his colleagues at the University of Vigo, Spain consider two ecotypes in particular, known as the “crab” and “wave” ecotypes. The wave ecotype lives on the lower intertidal shore, where it experiences constant waves and tides and is at risk of being dislodged. The adaptations to this niche include a smaller size, presumably to fit into gaps between rocks, and a larger shell aperture to accommodate a large muscular foot to better attach to the substrate. The crab ecotype lives higher on the shore, where it is at risk of drying out or being predated by crabs. A larger size, thicker shell, and a smaller shell aperture are the ideal adaptations to survive in this niche. There is some phylogenetic evidence that the ancestral form of these two ecotypes may have shared the crab ecotype’s characteristics. Therefore, it has been hypothesised that the wave ecotype could have evolved through paedomorphosis. Prof Rolán-Alvarez and his colleagues are investigating this possibility through proteomics and geometric morphometrics.

The paedomorphic hypothesis
Paedomorphism is the retention of juvenile characteristics in an adult organism. Influential paleontologist Prof Stephen Jay Gould suggested that paedomorphosis could occur through either the slowing of somatic development (somatic cells being all cells other than gametes, germ cells, and stem cells) so that when the organism reaches maturity it still retains juvenile traits, or by the acceleration of sexual development so that the organism reaches maturity before it outgrows the juvenile traits. A well-known example of paedomorphism is the retention of gills in the adult form of some species of salamander (gills otherwise only being present in the larval form), as an adaptation to aquatic environments.

Comparing the proteomes of the two ecotypes found that the crab ecotype had a higher level of proteomic differentiation than the wave ecotype across ontogeny.

In L. saxatilis it has been suggested that the wave ecotype may have evolved from the crab ecotype through paedomorphosis. This would mean that the wave ecotype has retained the small size and large shell aperture from a juvenile stage shared with the crab ecotype. There is an adaptive advantage of a smaller size for living on the lower shore, but the trade-off for a smaller size can be that this prevents reaching the required size/age for sexual maturation. Paedomorphism could be the solution for this problem. However, it can be very difficult to prove that paedomorphosis has occurred in a species.

In a 2012 study, Prof Rolán-Alvarez and colleagues analysed the proteome of the L. saxatilis ecotypes. The proteome of a species is the complete set of proteins expressed by the organism. Comparing the proteomes of the two ecotypes found that the crab ecotype had a higher level of proteomic differentiation than the wave ecotype across ontogeny. This supports a paedomorphic hypothesis of juvenile characteristic retention in the adult wave ecotype, and therefore lower proteomic differentiation. The analysis is limited though, as it can only indicate that the ecotypes differ at the proteomic level from an early stage of development, and cannot determine the exact changes that have taken place.

Geometric morphometrics
The differences between the crab and wave ecotypes of L. saxatilis are in the morphology of shell shape and size, and therefore a morphometric approach to testing the paedomorphic hypothesis could yield valuable results. In a 2020 paper, Prof Rolán-Alvarez and his colleagues describe an experiment they conducted to investigate the changes in morphology across development of the two ecotypes. They hypothesised that if the wave ecotype has evolved from the crab ecotype (or an ancestor with the same morphological characteristics) through paedomorphism, then the form of the wave ecotype shouldn’t differentiate across development as much as the crab ecotype. Additionally, the adult form of the wave ecotype should bear a strong resemblance to the juvenile form of the crab ecotype.

For this experiment, samples of L. saxatilis were collected from the coast of north-west Spain and grouped into size classes (in this species size can be used as a proxy for age), including an embryo stage. The size classes were determined for each ecotype separately based on the range of sizes in the sample, to allow analysis of the change in shell size over time specific for that ecotype. Landmark coordinates on the shells were used to establish overall size and the area of the shell aperture. The comparison of the change in shell sizes across the size classes showed that the crab ecotype changed more in terms of shell shape than the wave ecotype. These results are comparable to the higher level of proteomic differentiation found in the crab ecotype in the previous study, and support a paedomorphic hypothesis.

In L. saxatilis it is possible that paedomorphosis has resulted in the development of a separate ecotype adapted to life on lower levels of the shore.

However, when the area of the shell aperture was considered across the size classes of the two ecotypes, it became clear that while the results might show the expected pattern of change, the direction of change doesn’t support a paedomorphic hypothesis. The pattern of change refers to the magnitude of the change – in this example, the expected pattern is that the crab ecotype will change more than the wave ecotype (either in terms of shell size or proteomic differentiation), because the wave ecotype is retaining its juvenile characteristics.

The direction of change indicates the type of change, for example, does it get bigger or smaller. For the wave ecotype, the expected direction of change of the shell aperture should resemble the early stages of the crab ecotype development, as the hypothesis states that (due to paedomorphism) the adult forms of the wave ecotype should resemble the juvenile forms of the crab ecotype. This would mean that the shell aperture should be a similar size in both forms at early stages of development and decrease in size, but much faster in the crab ecotype. However, the analysis of the samples in Prof Rolán-Alvarez and colleagues’ study shows that in the wave ecotype the shell aperture increases in size. This doesn’t fit the expected direction of change and suggests that a different evolutionary process may be responsible for the divergence between the two ecotypes.

Evo-devo
Variations in the development of an organism can have large impacts on the evolution of the species, but until recently developmental biology wasn’t often a consideration when studying evolution. Evolutionary developmental biology, or “evo-devo”, aims to understand how changes in development through processes such as paedomorphosis can influence the evolution of a species. In L. saxatilis it is possible that paedomorphosis has resulted in the development of a separate ecotype adapted to life on lower levels of the shore. This allows this ecotype to exploit an area of the habitat that the original morphology is not well suited to, and it has been suggested that these two types could eventually diverge to become two species if further differentiation prevented interbreeding between the ecotypes. However, the evidence for paedomorphism in this species is not conclusive. Further investigation is required, and perhaps consideration of earlier development (the embryos in this study were fully formed) might provide a more definitive answer as to whether or not the L. saxatilis wave ecotype is an example of paedomorphism. Nevertheless, the analyses in these studies by Prof Rolán-Alvarez and his colleagues show that it is important to test evo-devo hypotheses at both molecular and morphological levels, and to consider both the pattern and direction of change.

<> We firmly believe that development is crucial to understand evolutionary processes. Whereas classic evolutionary mechanisms, especially natural selection, can provide knowledge about the survival of the fittest, we agree with developmental biologist Scott F. Gilbert that only the knowledge of development can help us answer questions about the arrival of the fittest. Given that paedomorphosis is the most famous hypothesis to account for the relationship between evolution and development, and given that we had previous evidence supporting it at the proteomic level, we wanted to test it at the most ecologically relevant trait in this species: shell shape.

How likely do you think it is that these two ecotypes will eventually diverge into separate species?

To some extent these two ecotypes are nearly separate species, as they have already developed several reproductive isolation mechanisms (microhabitat choice, mating preferences, etc.) and have a reduced gene flow between them. Presently, several researchers are studying how much the gene flow is limited between them as, in fact, it seems to be more limited than previously thought. Of course formally they still maintain the possibility to occasionally exchange part of their genome, which make them an ideal system to understand how true species are formed.

Investigating paedomorphism in the evolution of L. saxatilis was last modified: May 21st, 2021 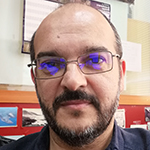 Prof Emilio Rolán-Alvarez has conducted research on evolutionary ecology and population genetics of marine snails, focusing on the causes of intraspecific variation mostly at very small scales at both phenotypic and molecular levels. These include the role of natural and sexual selection as well as the evolutionary mechanisms of speciation (evolution of reproductive isolation).

Prof Rolán-Alvarez tests whether the evolution of L. saxatilis ecotypes is consistent with the paedomorphic hypothesis.

The researchers would like to thank Mary Riádigos for administrative assistance, as well as Dr Manuela Truebano (Plymouth University) and two anonymous referees for revising the last version of their manuscript.