Spinal muscular atrophy (SMA) is a common neuromuscular disease characterised by weakness and wasting of muscles. People with the most severe form of the disease are unable to sit or walk and die within the first two years of life. Although the genetics of SMA are well understood, the cellular mechanisms involved are unclear and there is currently no cure. Professor Dr Brunhilde Wirth at the University of Cologne is using advanced genetics to discover SMA protective modifiers and various animal models to unravel the cellular mechanisms responsible for SMA and networks of protection, with the ultimate goal of developing novel therapeutics.

There are currently ~50,000 people living with SMA in Europe and the USA and, in the European population, one in every 35 people is a carrier of the disease. SMA is characterised by the progressive loss of motor neurons – specialised nerve cells that innervate muscle and stimulate contraction – and impaired neuromuscular junctions – the synapses between motor neurons and muscle cells. In patients with SMA, the muscles are under stimulated and so they weaken and waste away in a process called atrophy.
<>

Survival motor neuron
People with SMA have a deficit of a vital protein called “survival motor neuron” (SMN). SMN is produced by all body cells and is important for their survival. However, motor neurons require fifty times more SMN than any other cell type. Most individuals with SMA have inherited two absent copies of the SMN1 gene (the gene responsible for SMN production) from their parents.

Humans have an almost identical second copy of the SMN gene, called SMN2. This gene also produces SMN protein but, due to a problem with the splicing process, only 10% of the protein is functional. In SMA-affected individuals, SMN2 is the only source of SMN, so its copy number (humans can have between one and six copies) affects the severity of disease. For example, patients with two absent SMN1 genes and only two copies of SMN2 will usually have the most severe form of SMA (type I). These babies will develop symptoms before six months of age, will never be able to sit or walk, will be dependent on respiratory and nutritional support, and have a life expectancy of usually less than two years. People with two absent SMN1 genes but three copies of SMN2 usually have an intermediate SMA and learn to sit but never to walk. Those with two absent SMN1 genes and four to six copies of SMN2 usually have a mild form of the disease (type III or IV). Onset of symptoms is not until later in childhood or adulthood and patients are able to sit and walk despite some muscle weakness.

Phynotypically discordant families teach us a lot
In rare families, relatives of SMA-affected individuals may have no SMA symptoms despite carrying two absent SMN1 genes together with three or four SMN2 copies, a combination that would usually cause SMA. This suggests there are other factors involved in determining the severity of SMA.

By using advanced technologies to study the genes and proteins of family members in these SMA-discordant families, Professor Wirth has identified two proteins that act as SMA protective modifiers: Plastin 3 (PLS3) and Neurocalcin Delta (NCALD).

The protective effects of high PLS3 and low NCALD have been corroborated by Prof Wirth’s group using animal models of SMA, including mice, worms and zebrafish. Here, high levels of PLS3 or low levels of NCALD were shown to reduce disease symptoms. Using these same animal models, the group also showed that both PLS3 and NCALD protect against SMA by restoring endocytosis – a process that is essential for recycling the synaptic vesicles involved in transmission of nerve impulses across the neuromuscular junctions, which is impaired in SMA.

From gene to therapy
Having identified PLS3 and NCALD as protective modifiers, Prof Wirth’s group began to explore whether regulating production of these proteins could be used as a therapeutic strategy to treat SMA. The group used mouse models with either high PLS3 or low NCALD in combination with a low dose of SMN antisense oligonucleotides (ASOs), small molecules that increase SMN levels by targeting its production by the SMN2 gene. Both approaches dramatically reduced SMA symptoms. Strikingly, small amounts of SMN-ASOs in combination with low PLS3 increased animal survival from 14 days to over 250 days. This situation is comparable to severely affected type I SMA patients, where ASO therapy increases SMN production but not enough to cure the disease. In this instance, a combined therapy with a second agent, such as PLS3 or NCALD, could constitute a long term therapeutic option.<>

The first SMN ASO-based therapy (Spinraza) was recently FDA- and EMA-approved. Since the Wirth group have shown that a low dose of SMN-ASOs in combination with high PLS3 or low NCALD protects against even the most severe type of SMA in mice, regulation of these proteins could be used in combinatorial therapies with Spinraza to increase treatment efficacy.

Prof Wirth’s research highlights the power of protective modifiers to unveil the cellular mechanisms and develop novel therapies for SMA. The group are developing and using a number of different methods and technologies to identify the genetic cause of unsolved motor neuron disorders and to understand the genetic, biochemical, cellular and pathological basis of these disorders. They are also generating and using mouse models, zebrafish and, most recently, Drosophila (fruit fly) models as well as induced pluripotent stem cells to unveil the disease pathomechanism. Prof Wirth is now extending her research to search for the molecular cause of osteoporosis.

Does SMN deficit affect cells other than motor neurons?
<>SMN has a housekeeping function in snRNP biogenesis and splicing. Therefore, when SMN falls below a certain threshold, every single cell is affected. Engineered SMA mice with two absent mouse SMN genes and two human SMN2 genes develop a severe SMA, similar to people with type I SMA. In addition, these mice show impairment of almost every single organ that has been analysed so far. It is therefore very likely that people with type I SMA and only two SMN2 copies also require more SMN in every single cell and not only in motor neurons to maintain their function lifelong.

Why is only 10% of SMN produced by the SMN2 gene functional?
<>SMN2 is an evolutionary recently-occurred duplication of SMN1 and human-specific. The two SMN genes differ by only five nucleotides. Each SMN gene has eight important DNA pieces (exons) and seven less important DNA pieces (introns). From DNA to protein an intermediate product (RNA) is generated, in which the introns are removed (spliced). In SMN2 this splicing process is impaired due to one different nucleotide in exon 7. When exon 7 is lacking, the SMN protein is unstable and rapidly degraded. Instead 10% of SMN2 RNA carrying exon 7 produces a SMN protein identical with the one produced by the SMN1 gene.

Do people with mild SMA (types III and IV) live relatively normal lives?
<>People with type III and IV have no reduced life expectancy, but muscle weakness. It is very likely that, if presymptomatically-treated with Spinraza or any other drug able to increase SMN levels, these people will be cured. Therefore, SMA needs to be included in neonatal screening in Europe. Current presymptomatic clinical studies with Spinraza show the highest impact. In cases of people with type I SMA, an increase of SMN amount will most likely turn them into a type II or III. For these populations, we will need a combinatorial treatment using the knowledge of our independent protective modifiers.

There are currently around 50,000 people living with SMA in Europe and the USA, and in the European population one in every 35 people is a carrier of the disease

How are SMA-discordant families identified?
<>In the past, when we tried to identify the SMA-causing gene, we collected all family members for linkage (segregation) analysis. Shortly after Dr Melki identified the SMN1 gene in 1995, we analysed these unusual families, in whom affected and unaffected carried identical markers on chromosome 5 where the SMN1 was found. To our surprise, the unaffected showed the same absence of both SMN1 genes and identical copies of SMN2 as the affected siblings. At first, we even doubted whether SMN1 was the SMA-causative gene, but then more and more small mutations in SMN1 were identified strengthening the role of SMN1 in SMA.

How can production of PLS3 and NCALD be regulated in patients?
<>Unfortunately, we neither understand why in some individuals PLS3 is upregulated nor why NCALD is downregulated. We have some interesting hypotheses and are working on them to unravel the underlying genetic mechanisms, but it will need a lot of sophisticated work.

Unravelling the cellular mechanism of spinal muscular atrophy: from gene and modifiers to therapy was last modified: July 2nd, 2018 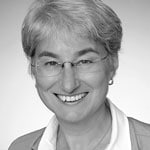 Professor Wirth’s research focuses on the genetic and molecular roots of neuromuscular disorders. Her team have a particular interest in translating their results into improved therapeutic methods.

Wirth, B., 2018, "Unravelling the cellular mechanism of spinal muscular atrophy: from gene and modifiers to therapy", Research OUTREACH (103). Available at: https://researchoutreach.org/articles/unravelling-the-cellular-mechanism-of-spinal-muscular-atrophy-from-gene-and-modifiers-to-therapy/ (Accessed YYYY/MM/DD)

One thought on “Unravelling the cellular mechanism of spinal muscular atrophy: from gene and modifiers to therapy”