Health & Medicine
Dr Gavin Y Oudit, a distinguished cardiologist from the University of Alberta, focuses his research on developing ground-breaking therapies to treat both genetic and non-genetic cardiovascular disorders, and to prevent heart failure. His exciting work into the role of ACE2 has provided a fundamental scientific understanding used in the development of therapeutic options for cardiovascular, renal and lung diseases. He has also provided important insights into various cardiomyopathies including heart disease associated with Fabry disease.

Every year, approximately 610,000 people die from heart disease in the United States, with heart failure (HF) accounting for one in nine fatalities. Worryingly, according to the American Heart Association, the number of people diagnosed with HF is expected to increase rapidly in the United States, from six million to eight million by 2030. Not only does this threaten life expectancy and impact the sufferer’s quality of life, but the financial implications are also severe. As a result of this increase, the total medical costs required to treat the disease are estimated to rise from $14.3 billion to $29.2 billion.

What is heart failure?
Essentially, HF is a condition whereby the heart cannot pump sufficient blood to meet the needs of the body. This can be due to a weakening of the muscle itself, or a deficiency in the volume of blood that fills the heart’s chambers. Abuse of alcohol, drugs, diabetes and obesity can greatly enhance the risk of suffering from HF, but genetic defects are also a common contributor. HF can result from a number of different factors including arrhythmia (irregular heart beat), heart attacks, hypertension and cardiomyopathies (disorders affecting the heart muscle).

Currently, there is no cure for HF. However, a combination of simple lifestyle changes and medication can improve quality of life. Nevertheless, prognosis can be poor for people who develop acute HF and these individuals often continue to suffer from the condition.

As a result, Dr Oudit and his team are looking to develop novel HF therapeutic options. Dr Oudit’s studies mainly focus on metabolic disorders associated with heart disease, neuromuscular dystrophy and Fabry disease – a genetic disorder that can cause cardiovascular complications. In fact, Dr Oudit’s ground-breaking research has already revolutionised the way clinicians diagnose and treat Fabry disease, reducing the risk of sufferers developing HF. Crucially, he has also shown that the renin-angiotensin system (RAS) plays a significant role in HF, and inhibiting its activity can act as a preventative measure. 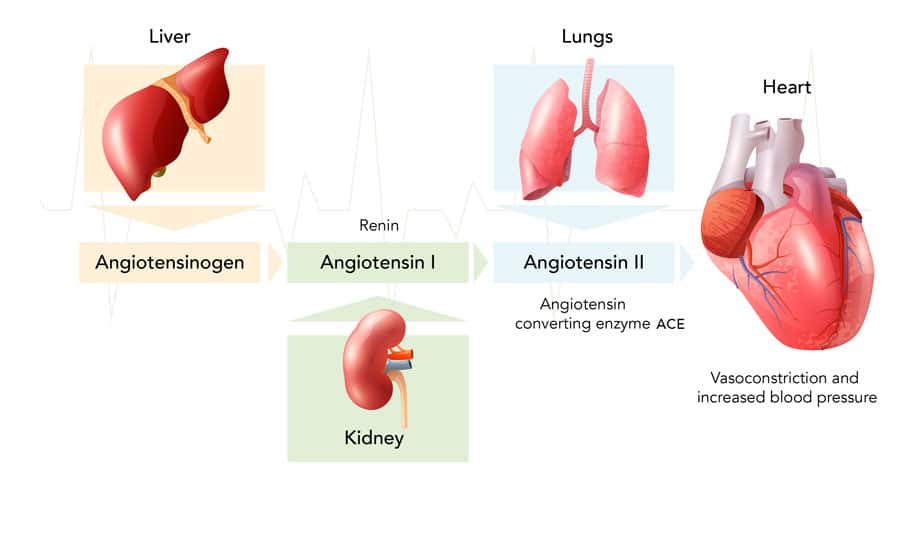 The role of the renin-angiotensin system (RAS)
The RAS hormonal system is vital in regulating blood pressure, controlling homeostasis in both the cardiovascular and renal systems. Low blood pressure is detected by the kidney, triggering the release of renin into the blood. This enzyme cleaves the plasma protein angiotensinogen to form angiotensin I. Another enzyme, ACE (angiotensin converting enzyme) transforms angiotensin I (Ang I) into angiotensin 2 (Ang II) which is a biologically active octapeptide. Ang II induces the release of the hormone aldosterone from the adrenal gland, causing vasoconstriction (narrowing of blood vessels), and increasing blood pressure to optimal levels.

However, Ang II can have an adverse effect on heart health by causing hypertension, ventricular dilation, hypertrophy (thickening of ventricular wall) and alterations in chamber configuration. These effects result in two HF disorders: i) HF with preserved ejection fraction (HF-pEF), whereby the left ventricle is stiff, reducing relaxation during blood fill before the next beat, and ii) HF with reduced ejection fraction (HF-rEF). This is where the heart cannot pump adequately, expelling less oxygen-rich blood.

In the past, researchers have attempted to inhibit the RAS system to reduce the adverse effects of Ang II: examples include ACE inhibitors and Ang II receptor blockers. These therapeutic approaches have effectively reduced hypertension, improved cardiac function and prevented ventricular remodelling. Although these medications have shown clinical promise in patients suffering from HF-rEF, they do not protect those afflicted with HF-pEF.

ACE2 – a natural prevention against RAS-induced HF?
To address this issue, Dr Oudit and his team have investigated other strategies to inhibit the RAS system. The discovery of ACE2 could provide a solution. ACE2 is a monocarboxypeptidase that degrades both Ang I and Ang II, inhibiting the RAS system at two levels. In fact, Ang 1-7 (a product of Ang II degradation) behaves as a cardioprotective peptide, actively reducing the negative impact of Ang II by suppressing aldosterone secretion and inhibiting myocardial fibrosis. Excitingly, studies on mice confirmed the protective benefits of ACE2 in both HF-rEF and HF-pEF. Clearly, ACE2 could potentially be a revolutionary therapeutic tool, although more studies need to be conducted to achieve optimal RAS inhibition and cardioprotection.

Fabry disease
Dr Oudit and his colleagues have also revolutionised the way clinicians treat and diagnose Fabry disease. This is an X-chromosome-linked recessive disease that affects around 1,500 to 3,000 people. A mutation in the gene encoding α-galactosidase A (a hydrolase enzyme involved in fat metabolism) confers insufficient degradation of glycosphingolipids, resulting in the accumulation of fatty deposits in cell storage organelles called lysozymes. Cell function is impaired, causing damage to a variety of tissues, including the kidneys, skin, eyes and heart. HF is the primary cause of death for individuals afflicted with Fabry disease, so early diagnosis is essential to prevent severe heart damage.

Diagnosis of Fabry disease is very difficult, and many individuals are not diagnosed until later in life – Dr Oudit and his team aim to change this

Unfortunately, symptoms of Fabry disease are subtle and are often associated with other more common disorders. Examples of these symptoms include hearing difficulties, kidney problems, fatigue, eye abnormalities and heart defects. Therefore, diagnosis is very difficult, and many individuals are not diagnosed until later in life – Dr Oudit and his team aim to change this.

T1 mapping
He and his team at the University of Alberta have developed an innovative diagnostic tool called T1 mapping. The term ‘T1’ refers to the ‘relaxation time’ of the cardiac muscle. Interestingly, in Fabry disease this T1 time is shortened, which is a rare phenomenon. T1 mapping is an MRI technique, but is significantly more powerful than ultrasound or regular MRI, as it can detect microscopic changes in the heart and determine damage severity early on. As a result, patients suffering from chest pain and hypertrophic cardiomyopathy can be screened for Fabry disease, and, if detected, can undergo Enzyme Replacement Therapy. This effective treatment uses an enzyme called agalsidase beta to degrade the fatty deposits in the cells.

Overall, the work of Dr Oudit and his colleagues is making an outstanding contribution to the field of cardiology. By developing novel diagnostic tools and therapies to treat heart failure, the team are drastically improving the quality of life of many people all over the world.

How does angiotensin II specifically cause heart failure?
<>Angiotensin II is a peptide hormone which is produced in the circulation and in the heart tissue. It produces high blood pressure and causes progressive myocardial and renal damage leading to heart failure.

ACE2 is an X-linked gene – can genetic mutations enhance the risk of developing heart failure, and if so, how can this be prevented?
<>Yes, ACE2 is X-linked so women have two copies and men have one copy of the ACE2 gene. These differences may relate to sex-based differences in cardiovascular disease with women having a better prognosis compared to men.

How long will it take for ACE2 to be used commercially to treat heart failure?
<>Between three and five years.

Are you researching any other ways to prevent heart failure?
<>Yes, we are developing novel apelin analogues as potential therapies for heart failure and we are screening for cardiomyopathies including Fabry disease. 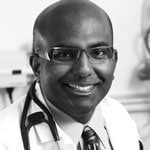 Following his academic career at the University of Toronto, Dr Gavin Oudit embarked on his training in Internal Medicine and the Clinician-Investigator Program of the Royal College of Physicians and Surgeons of Canada. Following this, he completed a post-doctoral fellowship in the molecular biology of heart failure before joining the University of Alberta, where he currently works as an Associate Professor, Cardiologist and Clinician-Scientist. He currently directs the Heart Function Clinic at the Mazankowski Alberta Heart Institute.

Dr Gavin Oudit’s research focuses on cardiomyopathies and heart failure. He and his team have been responsible for ground-breaking work investigating preventative measures for heart disease and Fabry disease. His research is largely focused on elucidating the molecular and cellular underpinnings of heart failure, but he studies other areas, including vascular and kidney diseases, as well.