Biology
How do vertebrate brains integrate information from external social cues and internal physiological states to produce appropriate behaviours? This is one of the big questions that Dr Karen Maruska and her research team at Louisiana State University (LSU) are striving to answer. Dr Maruska leads a research group that uses fish models to investigate how animals process and translate multisensory social cues into context-specific behaviours for reproduction and survival.

Animals, including humans, live in a multisensory world, using many sensory channels to communicate during crucial behavioural situations. External multisensory or multimodal signals include: visual, chemosensory (smell and taste), auditory (sound), tactile (touch), and mechanosensory (e.g., pressure or vibration) cues. These signals convey crucial information about the sender’s status, and must be integrated with the receiver’s internal physiological state for translation into adaptive behaviours e.g., those involved in courtship and reproduction.

There’s something fishy going on at LSU
Dr Maruska’s team uses the African cichlid fish Astatotilapia burtoni as a research model. Fish serve as an excellent model for this work, because they are the largest and most diverse group of vertebrates, they have well-described social behaviours, and are easily manipulated during experimentation. The availability of such a model provides an opportunity to study basic neuron and sensory function, and how these functions relate to proximate and ultimate behavioural mechanisms in comparative and evolutionary contexts.

Specifically, the group studies how the cichlid brain processes unimodal and multimodal sensory information, how sensory systems contribute to behaviour, and how natural fluctuations in the cichlid’s internal hormonal or nutritional state can influence neural function and behavioural outcomes. In order to uncover new insights into the mechanisms regulating animal reproductive behaviour, the team uses a combination of approaches, including: hormonal assays, sound recordings, advanced microscopy, brain recordings, molecular techniques, and behavioural analysis.

To mate or not to mate?
During the reproductive process, a dominant male cichlid fish becomes brightly coloured and performs courtship behaviours to tempt passing females into their territories to spawn. A sexually-receptive (gravid) female enters the territory, lays eggs, and immediately picks them up in her mouth. Following this, the male quivers his body towards the female, which results in her nipping at his so-called egg spots, which look remarkably similar to female eggs. This act stimulates the male to release sperm, which then fertilises the eggs already present in the female’s mouth. The fertilised eggs are then reared inside the female’s mouth (mouth brooding), and the young are released after approximately two weeks.

How do females use male courtship signals, and where in the female brain are these signals integrated with her internal state to produce appropriate behaviours? In other words, how does the female decide whether or not to mate with a certain male? These questions are at the centre of Dr Maruska’s work.

The role of visual signals such as colours and the male body quiver in cichlid mating has been intensively studied; yet researchers have never been able to explain the diversity of cichlids by visual communication alone. During courtship, female cichlids are exposed to a wide array of stimuli by dominant males, including colours, movements, sounds, and chemicals, and up until a few years ago, the role of other sensory channels e.g., the auditory system, was virtually unexplored. The work of Dr Maruska and her group has made significant advances in this area.

Acoustics in cichlid reproduction
As a postdoctoral scholar at Stanford University, Dr Maruska used sound recording analysis to reveal that male cichlids deliberately produce courtship sounds when close to a gravid female, and that these sounds are spectrally compatible with the female’s hearing abilities. Females were more sensitive to these sounds when they were gravid, and this coincided with an increase in the levels of the primary female sex hormone estradiol, and an increase in levels of the enzyme that produces estradiol (aromatase) in several auditory processing and decision-making regions in the brain. Behavioural experiments revealed that gravid females were more attracted to male courtship sounds than to unspecific noise, highlighting the importance of acoustic cues in female mate choice.

This work provided the first evidence for the importance of acoustic communication as part of a multimodal signalling repertoire during cichlid reproduction. It also demonstrated that perception of such acoustic information changes, depending on the receiver’s internal physiological state (i.e. the female hormonal state).

The role of chemosensory signalling in cichlid social interactions
Dr Maruska’s research also demonstrated that dominant male cichlids modulate their urine release in both reproductive and territorial situations, suggesting that urine might be an important social signal. Males released urine sooner and more frequently when visually exposed to gravid females, and the combination of visual and chemical signals resulted in ten times more courtship behaviour than visual cues alone.

Along with the work on acoustic communication, these findings further highlight the role of non-visual sensory modalities in reproductive behaviour. Remarkably, reproductive and territorial behaviours were enhanced when males were simultaneously exposed visually and chemically to other fish, as opposed to visual exposure alone, demonstrating the power of multimodal signalling in regulating behaviour. Recent work done by a PhD student in the lab, Karen Field, has shown that females also use chemosensory signalling in the presence of dominant males and mouth brooding females (a sign of aggression), and that this coincides with activation of highly conserved social decision-making regions of the brain. A senior research associate in the group, Dr Alexandre Nikonov, is also recording from single neurons in these same brain regions to determine how this chemosensory information released by females is processed in the male’s brain. Coupled with the previous work, these findings illustrate true chemosensory communication in both sexes of a single fish species, and reveal neural substrates (i.e., parts of the brain) that mediate sexual and aggressive social behaviours in females.

Mapping the brain’s response to multimodal stimuli
Building on previous accomplishments, Dr Maruska now leads her team (PhD student Teisha King, and several undergraduate researchers) on an ambitious National Science Foundation-funded project that will use behavioural, cellular, and molecular analyses to shed further light on how multimodal signals are represented in the brain of the female cichlid, as a model for all vertebrates. Specifically, this project aims to identify the neural substrates that mediate behavioural decisions based on the reception of multimodal signals, and whether neural activation patterns are influenced by the female reproductive state.

Preliminary findings revealed clear differences in brain activation between females exposed to courting males and other females, allowing the group to identify parts of the brain involved in receiving and processing such signals.

This work is timely and will transform our current understanding of how sensory inputs, reproductive state, and behavioural circuits interact in the vertebrate brain

What might this mean for society?
Dr Maruska’s work has shown that communication in cichlid fish is multimodal and nonredundant in both sexes, whereby each sensory channel (visual, acoustic, or chemosensory) conveys a distinct message. The work also found that when visual and acoustic, or visual and chemosensory, information is conveyed simultaneously, visual information dominates. The group is also currently investigating how anthropogenic noise (noise caused by humans) might influence fish behaviour, physiology, and sensory abilities, a project led by PhD student Julie Butler. This work could have implications for how we consider the consequences of environmental noise, urbanisation, and climate change on reproduction and survival in fishes and other vertebrates.

Female cichlids are mouth brooders, and they must be able to rapidly change their eating behaviours during the reproductive cycle. Once brooding begins, they rapidly cease eating to protect the developing young, and once the young are released, they resume eating to regain energy for subsequent breeding attempts. What controls these switches, and how exactly does the brain control the female urge to eat? These fascinating questions are another current NSF-funded focus in Dr Maruska’s group (in collaboration with Dr Suzy Renn, Reed College), and will shed light on the neural basis of feeding and maternal care behaviours. The answers may even improve our understanding of human eating disorders.

The long-term goal of Dr Maruska’s research is to gather a complete picture of how a species communicates during reproductive and aggressive contexts using multisensory systems, and how this sensory processing and behaviour can be influenced by the animal’s internal physiology, such as hormone levels, reproductive state, or social status. All animals live in a multisensory world, sending and receiving information in multiple sensory channels, yet many previous studies examine only a single sensory modality at a time. Accounting for multisensory signals and inputs better represents an animal’s natural world, providing new meaningful data on how animals use this information for behavioural decisions. Deciphering how all of these processes work will significantly advance our understanding of how the vertebrate brain regulates social behaviours, and will likely overlap with other research disciplines, such as: psychology, evolution, and cognitive neuroscience.

Why have you specifically chosen the African cichlid fish as a model organism for your research?

What has been the biggest technical challenge in your research to date?

To what extent do the behaviours observed in the controlled laboratory environment mimic real-life situations for these fish?

Do you have plans to explore the influence of epigenetics on behaviour in your model?

What relevance, if any, can this research have for fish conservation practices? 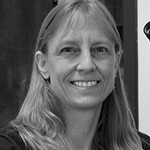 Karen Maruska is an Assistant Professor of Biological Sciences at Louisiana State University. She received her PhD from University of Hawaii and was a postdoctoral scholar at Stanford University. Her research uses fishes as vertebrate models to study animal communication, sensory system plasticity, and the neural basis of social behaviours.

Dr Maruska and her team’s research aim is to use fish models in order to gain insight on the basic mechanisms of how the brain functions and adapts to an animal’s constantly changing external environment and internal physiological state.