Health & Medicine
Malaria still claims the lives of hundreds of thousands of people a year and the World Health Organisation identifies half the world’s population at risk from the disease. Even more worryingly, an increasing number of malaria strains are showing signs of drug resistance to existing treatments. One approach that still seems to be effective is the use of artemisinin-based combination therapies (ACTs). To improve the effectiveness of such treatments, Prof Joseph Alia at the University of Minnesota Morris is using computational chemistry modelling, such as density functional theory, to model how these drugs behave and work.

In 2018, there were an estimated 228 million cases of malaria worldwide. Of those, 405,000 would prove to be fatal. However, despite the prevalence and danger of malaria – which the World Health Organisation has identified as one of the most dangerous diseases after tuberculosis – there is still no robust, commercially available vaccine for the disease, and current treatment methods are starting to lose their effectiveness.

Of the hundreds of thousands of deaths each year due to malaria, 94% are in sub-Saharan Africa and were predominantly children under five. While malaria is typically a treatable disease, diagnosis and treatment must occur relatively rapidly for a full recovery to be made. Delays in treatment can result in the disease lying dormant for months or years before reappearance.

However, malaria is not always a simple disease to treat owing to the parasites that cause it. There are several kinds of malaria-causing Plasmodium parasites which are seemingly simple-looking single-celled organisms. Typically, people are infected when a mosquito carrying these parasites bites a human host and injects them into the blood. Once the parasites have found a host, they can either hide and lie dormant or begin to breed and multiply, infecting red blood cells. These cells then rupture, releasing toxins and causing the flu-like symptoms commonly associated with malaria.

Part of the challenge with treating the disease is that each of the types of parasites have slightly different infection strategies, patterns, and sensitivities to different drugs. This is why taking preventative antimalaria drugs may not stop you contracting malaria as they may only protect against infection from some types of parasite. The bigger problem, though, is the number of parasites developing drug resistance.

There are worrying signs of ACT resistance appearing in the Greater Mekong region in Southeast Asia.

Prof Joseph Alia at the University of Minnesota Morris in the US is using tools developed for quantum chemistry to look at the problem of drug resistance and effective treatment of malaria. By using computational simulations, he can predict whether a certain type of drug molecules will be soluble in different environments, like fats or water. By being able to predict the lipophilicity (‘fat-loving-ness’) of a drug candidate and other properties, Prof Alia is able to identify molecules that are likely to be effective antimalarials and help tune combination treatments to maximise their efficiency.

Plasmodium (left) is a parasitic single-celled organism. Sporozoite forms of Plasmodium (right) develop in the mosquito’s salivary glands, and once the mosquito bites a human host, they are being injected into the blood, infecting red blood cells.

Drug resistance
Many of the early cures for malaria were examples of natural products. Chinese physicians as early as 2nd century BCE had some success with using wormwood as a treatment. Probably the most famous cure for malaria is quinine, which was widely used in the 17th century and also comes from the bark of the cinchona tree. While the active ingredient of the bark was not recognised as quinine at the time, in Early Latin America the medicinal properties of the cinchona tree were recognised long before its exportation to Europe.

Quinine use was eventually replaced by chloroquine, a synthetic equivalent developed in the 1920s. However, by the 1950s, problems with chloroquine treatment started to become evident. Many of the parasites had started to develop resistance to the treatment, and this became so widespread that by the 1980s, quinine found some use again for the treatment of severe malaria. Meanwhile, during the 1960s, scientists in China also looking for answers to drug-resistant malaria had returned to wormwood and isolated a compound they first called qinghaosu, now widely known as artemisinin. Through the 1970s and 1980s qinghaosu was developed in China as the basis of highly effective treatments against malaria but remained unavailable throughout most of the world for decades to come.

Artemisinin emerged as a wonder drug after large-scale randomised trials in the 1990s. What made treatment with artemisinin so effective was not the use of the drug alone, but the development of artemisinin-based combination therapies (ACTs) that now represent the gold standard in malaria treatment.

In combination therapy, multiple drugs are used as part of a treatment course. The advantage of this is that the combination of the drugs is often better than the sum of their individual parts, making it possible to achieve efficacy at lower doses or gain additive beneficial effects. However, there are worrying signs of ACT resistance appearing in the Greater Mekong region in Southeast Asia with fears that similar resistance could start to develop in Africa. This is why researchers like Prof Alia are working so hard to find new combination treatments to keep ACT as a viable treatment option as well as finding new drug alternatives.

Finding the details
Understanding how drugs interact with the body and cells is a complex process and even small differences in drug structures can lead to very different interactions. Prof Alia is applying his background in a powerful quantum chemical method known as density functional theory (DFT). DFT is a very popular computational approach for modelling a vast array of systems, from solar energy materials to molecules in our atmosphere. Part of its widespread success has been in its excellent compromise between computational efficiency and accuracy.

Quantum chemistry is all about applying the rules of quantum mechanics to physical systems like atoms and molecules.

Quantum chemistry is all about applying the rules of quantum mechanics to physical systems like atoms and molecules in order to obtain physical information without any experimental input. This is not simple work and in a lot of cases, many approximations need to be introduced to make the equations used solvable. However, particularly with advances in computational power, quantum chemistry has proved a very powerful tool for understanding how atoms and molecules react.

Prof Alia has focused in particular on applying DFT to understand the lipophilicities of antimalarial drugs and their terminal half-life – the time it takes for the concentration of a drug in the blood plasma to halve. The terminal half-life is an important property in ACT as the combinations of drugs used normally involve pairing the artemisinin with its short terminal half-life with a longer-lived combination.

Right on time
Part of the challenge for Prof Alia was finding a way to approximate the chemical environment provided by human fat in the calculations. The lipophilicity of a drug determines how fat-soluble it is and is important in determining terminal half-lives as it affects how easily drugs can pass across membranes either for absorption or excretion. However, modelling real tissue would require thousands of atoms and be too computationally expensive.

Instead, Prof Alia used an approximate model of olive oil, and his results suggest that this is a much more accurate and reliable model for the effects of fat in calculations than 1-octanol, an alcohol compound that is often used instead. With an accurate model now for human fat, this is how Prof Alia could calculate lipophilicity parameters for the drugs of interest and translate these into the terminal half-lives.

Getting the timing right with malaria therapies is important as certain drugs are also more effective at certain stages of the parasite’s life cycle. Generally, artemisinin itself acts quickly, giving fast relief from the symptoms of malaria and destroying most of the parasite population in the early stages of its life, whereas the slower partner drug acts as a ‘clean up’ operation, completely eliminating the remaining parasite population and preventing reinfection.

Prof Alia’s calculations have allowed him to see exactly how small structural modifications of existing artemisinin structures affect the lipophilicity and terminal half-life of the compound. This is very important for pre-screening which drug combinations are likely to be effective or which types and families of compounds might be of interest for further investigation and experiments. Given the challenges, expense and time it takes to synthesise new compounds, being able to pre-screen drugs computationally is a powerful tool to make drug and treatment development cheaper and more effective.

What seem to be the most promising advances in ACT?

<> I believe computational approaches can play an increasingly important role in two ways. Firstly, pharmacokinetic/pharmacodyanmic models of how ACTs work provide insights into how they may be optimised to ensure positive outcomes for patients, protect current drugs from resistant strains, and as a guide to properties desirable for new drugs. Secondly, approaches from computational chemistry can improve the understanding of how subtle differences in molecular structure of drugs can cause important differences in the way they behave and how desired properties for possible new drugs may be translated into molecular structures. 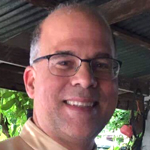 Joseph Alia completed a PhD in Chemistry at Yale University in 1995 and has taught Physical Chemistry at the University of Minnesota Morris since 2003. Joe has travelled extensively and, in his research, applies methods in quantum chemistry and thermodynamics toward solutions to worldwide problems such as malaria.

Tyler Kelly and Sheila Karl, undergraduate students at the University of Minnesota Morris