Physical Sciences
The family of 17 elements known as the “rare earth elements” are difficult to produce economically. Despite this, they are described as “critical raw materials” because of their unique properties and their various technological applications. This means their use is accelerating globally. Separation of these elements is a fundamental challenge, but this does not daunt Dr Santa Jansone-Popova and her team at Oak Ridge National Laboratory. In recovering praseodymium from neodymium using a variety of ligands known as diglycolamides, she has been demonstrating potentially game-changing advances in liquid-liquid separations that could realise more of these in-demand materials.

Despite their name, the rare earth elements (REEs) are an abundant group of metallic elements (grouped with the actinides near the bottom of the periodic table) comprised of 15 lanthanides (lanthanum-lutetium), scandium, and yttrium. With desirable electronic properties, REEs are exploited in a myriad of technologies and devices ranging from renewable energy applications to military use. Cerium, for example, is an integral component of most catalytic convertors.

Liquid-liquid separation
In 2010, a supply crisis arose as escalating demand combined with supply issues. This was due to the difficulties in obtaining REEs. Although each individual element has its own distinctive electronic properties, collectively the group demonstrates much chemical commonality, which has always presented chemists with enormous challenges, not least in extracting them from each other. Separating adjacent lanthanides (Ln) is particularly problematic when they are naturally fused, as they tend to be in mined ores, for example. 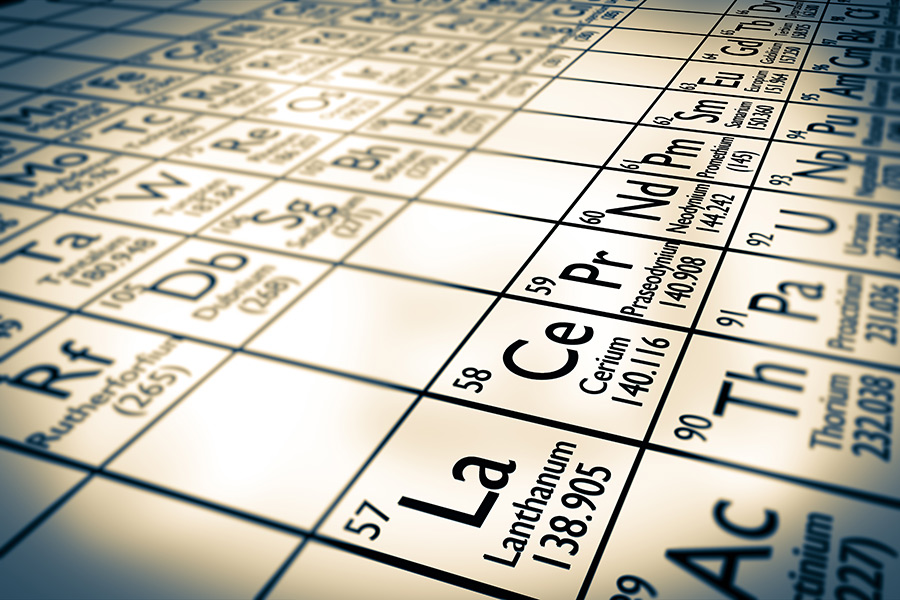 When the crisis hit, most countries encouraged further research into liquid-liquid separation, as this is the most accepted technology for recovering individual REEs. Among other advantages, this form of separation can be continuously operated and can lead to substantial production capacity. In addition to this, gaining more knowledge of this particular methodology might enhance the sustainability agenda while contributing to a circular REE economy.

Liquid-liquid extraction is a solvent extraction technique which uses compounds (or ligands) known as extractants to transfer metal species between the two immiscible phases. The extractants “hold” metal ions using electron-rich donor groups such as oxygen, sulphur and nitrogen. The ligands bind the metal ions in a coordinated or arranged manner, often in spatially complicated arrangements forming what is known as “complexes”. The array of donor atoms directly attached to the central metal is referred to as the first coordination sphere, while a second coordination sphere consists of molecules and ions interacting in various ways with the first coordination sphere. Although the second sphere has a less direct influence on the reactivity and chemical properties of a metal complex, they are important in understanding the reactions of the complex as a whole. Liquid-liquid extraction takes metal species from an aqueous medium into an organic solvent, forming combinations that separate out into distinct layers.

Gaining more knowledge of this particular methodology might enhance the sustainability agenda while contributing to a circular REE economy.

Key in REE extraction is the selection of the ligands with a right number and arrangement of functional groups as well as the lipophilicity, size and viscosity. Functional groups are groupings of atoms within a molecule that can maintain functionality independently of other atoms within the molecule. They can determine the degree to which the desired metal ions can be extracted and therefore, extraction ability of the extractant can be improved by introducing subtle structural changes.

Alternative chemical groups
The Chemical Sciences Division at Oak Ridge National Laboratory in Tennessee has been investigating lanthanide and actinide separations for decades. Dr Santa Jansone-Popova and her team have been diligently adding to the expertise, contributing new insights into the field of solvent extraction. Previously seen as a mature technology, the process typically uses organophosphorus acid as the extractant.

On an industrial scale, the separation is usually accomplished using 2-ethylhexylphosphonic acid mono(2-ethylhexyl) ester (EHEHPA for short) where light REEs (lanthanum-gadolinium) get separated from heavy REEs (yttrium and terbium-lutetium). After the introduction of a neutral family of ligands called alkyl diglycolamides (DGAs) for the separation of metal ions in early 1990, ORNL and INL researchers together explored them further with a view to use them as effective alternatives to acidic extractants.

Different processes are at play between the organophoshorus acids (acidic extractants) and DGAs (neutral extractants). Acidic extractants in the Ln separation process operate by pH swing whereas DGAs operate by anion swing mechanism. As will be expanded upon later, when DGAs bind lanthanide ions, they have to transfer (co-extract) 3 counterions (anions) for each Ln3+ ion in the hydrocarbon solvent as well. This extraction of ions is facilitated at high anion concentration and the release of ions back into aqueous phase is facilitated at low anion concentration in the aqueous phase. This is called the La Chatelier’s principle. Acidic extractants do not co-extract the anions, since the organophosporus acid acts as a weak acid, i.e. 2 phosphonate molecules form hydrogen bonded dimers, 3 such dimers (each with -1 charge) bind Ln3+ ion, forming a charge neutral complex.

In DGAs, the metal ion is typically bound to three oxygen atoms within “lipophilic” ligands; these are ligands that dissolve easily in lipids, molecular groups insoluble in water but soluble in organic liquids. Amide refers to those parts of the DGAs where nitrogen atoms are linked to a carbonyl group (these are groups where a carbon atom is double bonded to an oxygen atom). By combining different extractants, ions can be surrounded by a concentric shell of solvent in a process known as solvation where reorganisation takes place between solvent and solute molecules into solvation complexes, allowing improved solvent extraction efficiency. Could it be that by manipulating the structure of DGAs in different chemical environments, more efficient separation of heavy REEs from light REEs could be achieved? Attempting to answer this question drove the researchers to study the structure-activity relationship of a range of ligands based on DGAs.

These findings are encouraging and directly contribute to the possibility of greater efficiencies in separation chemistry.

Chains of varying length and shapes
For the purposes of their studies, Dr Jansone-Popova and her team synthesised a range of functional groups known as alkyls: organic chemicals that exclusively contain hydrogen and carbon atoms. These groups can be arranged into different structural configurations. For example, their length and shape can be altered, branches created, or linear components transformed into cyclic arrangements, reducing crowding. 12 novel DGA-extracting agents were produced, all having differently substituted alkyls. The ability of these compounds to facilitate the separation of 14 lanthanides (excluding radioactive promethium) from hydrochloric acid were studied by dissolving the extractants in hydrocarbon solvent.

Observing structure-performance relationships
Adopting a structure-performance relationship approach and using the 3 most extensively studied DGAs (these have the acronyms TODGA, TEHDGA and DMDODGA), the 12 varied extractants were designed to study the interplay of “steric” and electronic effects (where steric is the spatial arrangement of atoms in a molecule) that control rare-earth element extraction efficiency.

Probing the structure of complexes that were formed using X-ray spectroscopy, the team made some stark discoveries, observing that the structure of the alkyl chains plays a key role in the metal ion extraction performance. Just subtle changes in structure around diglycolamide carbonyl oxygen atoms resulted in dramatic shifts in the lanthanide extraction strength and selectivity. Between the aqueous and organic phases, differing complex stabilities were experienced, facilitating phase-disengagement and intra-lanthanide selection. Evidence suggests electrostatic interactions beyond the first coordination sphere within a complex dictate extraction behaviour as increasing and decreasing extraction efficiencies were quantified by the researchers.

It was found that as ligand size increased, extraction of lanthanides was markedly reduced. Similar reduction was also observed when these spacious groups were placed too close to the DGA oxygen atoms.

The team observed better extraction from lanthanum going through the series to lutetium, the decrease in ionic radius seemingly increasing extraction efficiency across the series and between adjacent lanthanides (in the periodic table). It is thought that the lipophilic ligands leverage incremental change in ionic radius brought about by lanthanide contraction. Exponential improvement in extraction was observed across the lanthanide series and thought to be underpinned by the ability of extractant molecules to dehydrate lanthanides during the separation process as the charge density of ions increases going from La3+ to Lu3+.

The researchers also reported that by shortening alkyl substituents or by placing them on branching sites further away from amide functional groups improved the extraction process. Some of the rationale for this is placed on the need for strong binding between the extractants and metal ions. In other findings, less steric hindrance in the alkyl chain attached to the amide groups demonstrated better extraction ability than their higher alkyl chain counterparts while decreased extraction efficiencies may be due to increased crowding around the metal-ion binding site interfering with the efficient accommodation of counter ions in a secondary coordination sphere.

Advancing developments
All of these findings are encouraging and directly contribute to the possibility of greater efficiencies in separation chemistry. If economic extraction from source is to be enabled, this will be key to addressing the need for critical materials. The work of Dr Jansone-Popova et al. provides innovative ideas as to how improved separations of light lanthanides could be obtained. In ascertaining how subtle steric and electronic changes markedly affect the extractant performance from hydrochloric acid media, they are advancing the development and implementation of next-generation lanthanide separations processes. 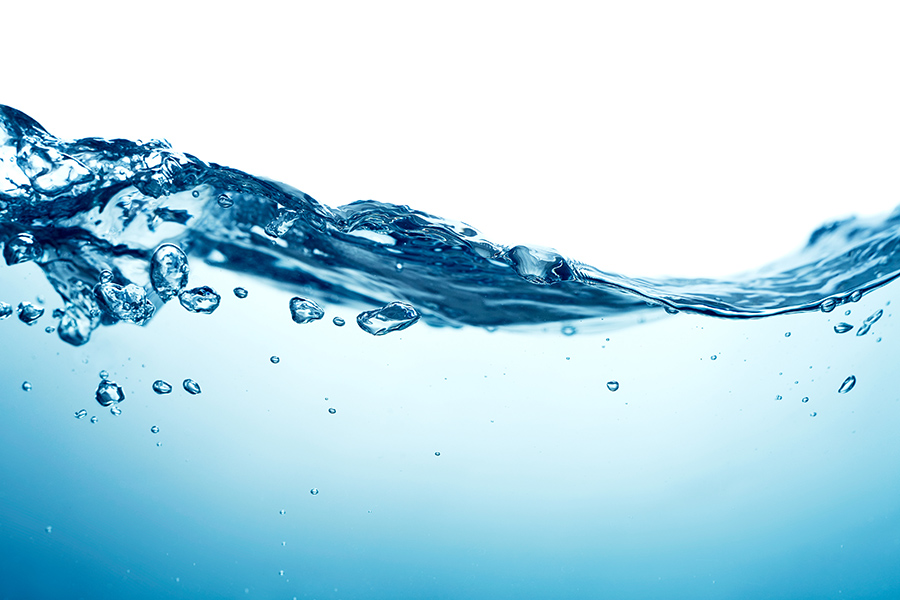 Is there the possibility of exploring another ligand family that might yield greater extraction efficiencies?

<> Developing processes that result in more efficient separation of adjacent Ln(III) is the key. This will lead to reduced processing costs and improved waste management. The neutral extractants (diglycolamides) offer better selectivity than the acidic extractants based on organophosphorus compounds. We are actively exploring other ligand families that show more than 2-fold increase in selectively separating the adjacent lanthanides. Given the ever-growing demand for critical materials, we expect the emergence of more efficient separation processes in the years to come.

What more could be done to significantly reduce processing costs?

<> Reduced chemical consumption and their recycling, smaller number of separation stages, and use of extractants that can separate adjacent lanthanides with higher efficiency – are the main drivers to reduce the processing costs. This is a challenging task that motivates chemists and engineers to work together to develop better separation processes. 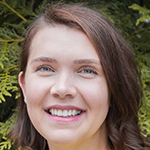