What do precious gems, seashells, and bones have in common? The answer is minerals. Minerals are chemically complex solids that are mostly formed naturally by Earth’s and space’s geological processes but can also be produced by many living species, including humans. Dr Raffaella Demichelis, at Curtin University, Australia, is using computational chemistry to see how these minerals form and how their structure and composition affect their properties and chemical behaviour.

Minerals are a very special type of solid compound. They often contain a mixture of chemical elements that are arranged in a highly ordered fashion according to what is known as a crystal lattice. Together with the composition, the shape and structure of the lattice then determine the properties and appearance of the mineral.

Common minerals include quartz, calcite, and haematite. The huge diversity in their appearance and properties – such as their hardness – comes from their different chemical compositions and structure. Amethysts, with their beautiful purple hues, are a specific type of quartz. Quartz is made of silicon and oxygen, but amethysts get their rich colours from the presence of irradiated iron impurities that are incorporated with silicon and oxygen in the crystal.

There are numerous ways of forming new minerals. They can grow from solutions, for example when waters rich in dissolved salts evaporate, leaving behind the residual dissolved minerals. Minerals can also be formed from magma as it cools or transformed into other minerals through processes that involve changes in temperature and pressure.

A wide variety of minerals are produced biologically, through a process that is called biomineralisation. Bone mineral, an inorganic crystalline solid known as hydroxyapatite, is what endows our skeletons with their strength and weight-bearing abilities. A number of animal pathologies are linked to the formation of minerals in their bodies, such as kidney stones and osteoporosis. Several sea creatures also produce minerals. Lobsters and other crustaceans, for example, produce part of their exoskeletons, or shells, from aggregation of calcium and carbonate ions, resulting into calcium carbonate minerals (the same minerals that form scales in domestic devices and industrial pipes). Many molluscs produce their shells and hard tissues in similar ways, and species like limpets make use of iron-containing minerals to form their terrifyingly strong teeth. While they may look inconspicuous, their teeth are made of one of the strongest known biological material, and they make good use of them to cling on to rocks and scrape algae for feeding. Bacterias and plants are also able to grow minerals. For example, some plants can produce small needles called raphides that are mostly made of calcium oxalate minerals, for defence against herbivores.

With their simulations, Dr Demichelis’ team could deduce the presence of magnesium impurities and determine the exact orientation of the water molecules.

The chemical and structural diversity of minerals makes them complicated to understand. For example, minerals with the same chemical composition can have different crystal structures and this impacts upon their properties, chemical reactivity, and appearance. Trying to untangle this complex science is at the heart of Dr Raffaella Demichelis’ research at Curtin University, Australia. By using computational modelling, she is able to pinpoint with atomic precision what happens as minerals grow and react. From this, she is developing our understanding of why some minerals are so abundant and others less so, and how living creatures make the minerals they vitally depend on.

Atomistic simulations
A very simple way of picturing how a mineral looks on an atomic scale is as a collection of balls connected to their nearest neighbours by springs. Each ball represents a chemical element. The springs between the balls represent the chemical bonding between the elements. Very strong chemical bonds are like strong, stiff springs that require a lot of energy to move.

Although we cannot feel this movement when we touch solid objects, all the atoms in a mineral are in constant motion. The chemical bonds, or springs, oscillate at a particular frequency. One of the complexities of performing atomistic simulations for solid materials is that a single mineral will be made of thousands, millions and even more individual atoms. The more atoms in a simulation, the more time it takes to compute or run the simulation.

Fortunately, researchers like Dr Demichelis have some tricks up their sleeves when dealing with such large systems and calculations. Although her calculations still require the use of very powerful supercomputing facilities, the regular and ordered nature of minerals mean that she can break down their structures into smaller, repeating patterns or motifs that make up the whole structure. From this, she can capture the level of detail and information that comes from describing the individual atoms that make up the mineral while making the calculations computationally feasible.

By using atomistic simulation, Dr Demichelis’ team was able to determine the exact positions and orientations of the water molecules in calcium carbonate hemihydrate while also demonstrating that the structure experimentally observed contains magnesium impurities. Such phase was indeed originally thought as a pure calcium phase.

There are several different forms of calcium carbonate, each having different crystalline or amorphous structure.

By simulating several possible structures of calcium carbonate hemihydrate, with and without the presence of magnesium, Dr Demichelis was able to conclude that magnesium impurities cause a distortion of the crystal structure, which would look different in case of a pure calcium phase.

A rare form
Not all mineral forms are equally abundant, and Dr Demichelis has been studying one of the least common types of calcium carbonate, a mineral known as vaterite. Vaterite has been found in living organisms, including plants, fish, freshwater snails, and saltwater clams. It is the mineral many molluscs produce to repair their shells when damaged.

Unlike many other calcium carbonate minerals, the crystal structure of vaterite has been debated for decades without reaching an agreement. Dr Demichelis’ calculations shed a light on this complex mineral by proposing a solution for its structure that has been confirmed also experimentally.

In her simulations, Dr Demichelis can explore not just how the arrangement of atoms in space affects a mineral’s properties and behaviour, but also simulate how these evolve over time. Therefore, her team is now tackling the challenge of modelling how biologically active molecules can direct the formation of calcium carbonate, something particularly relevant for vaterite as it is found most frequently in biological environments.

For example, her team used these types of simulations to look at which surfaces of the mineral are stable in water. This is because most biological processes related to mineralisation occur in water. From this, she could also track exactly how water molecules interact with vaterite, how long each molecule spends attached to the surface before leaving and allowing another molecule in, and detect and analyse possible attachment sites for biomolecules.

Determining how biological molecules can direct the formation of minerals is crucial for understanding how lifeforms like limpets can produce some of the world’s most impressive materials. Living organisms are able to grow minerals with specific sizes, compositions and shapes, something far beyond our limits in materials synthesis. If we are going to be able to mimic this incredible prowess at materials chemistry, first we need to understand in detail how it works, and this is exactly what Dr Demichelis’ research helps us to do.

What types of minerals will you be looking at in the future?
<>My group is starting to look into the properties and chemical reactivity of silicate minerals, due to their potential applicability to harvest carbon dioxide from our atmosphere and eventually transform it into molecules of economic or biological significance – all this while continuing to unravel the mysteries behind the formation of biominerals like carbonates, phosphates and oxalates.

Modelling the growth of minerals was last modified: August 16th, 2021 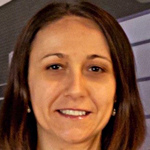 Dr Raffaella Demichelis is an award-winning scientist who leads a team at Curtin University doing research in materials chemistry and geochemistry, using computational techniques. She engages with STEM outreach activities and advocates for a mentally safe, flexible and inclusive research environment, allowing for sustainable and diverse career paths.

Dr Raffaella Demichelis uses atomistic simulations to understand how minerals form and interact with their environment, and to explain their properties.