Engineering & Technology
Portugal’s famous coastline consists of hundreds of miles of sandy beaches. It’s no surprise that urbanisation in the region – a result of tourism and fishing activities – has led to the accumulation of marine litter in these areas. But while local organisations focus their efforts on beach cleaning to keep tourist spots looking pristine, nearby sand dunes accumulate plastics, from plastic bottles to octopus fishing pots. The sand dunes are important ecosystems for insects, birds and plantlife, and generally considered too delicate to census on foot. In Coimbra, Portugal, an interdisciplinary team of scientists is using drones to tally and identify marine litter on local beaches, to understand its origins, and propose methods of protecting these delicate ecosystems.

Unmanned Aerial Vehicles – known as ‘UAVs’ or more commonly ‘UAS’, Unmanned Aerial Systems – until fairly recently were specialist military technologies used to perform tasks deemed too dangerous for a person. Nowadays, UAVs are a well-established commercial market: the FFA estimates that over a million drones are used for recreational use in the USA.

The technology has proven a success in aerial filming and photography. As the technology has developed and prices fallen to meet demand for low-cost UAVs, the opportunity has arisen to use them to perform tasks of scientific importance at a relatively low cost. 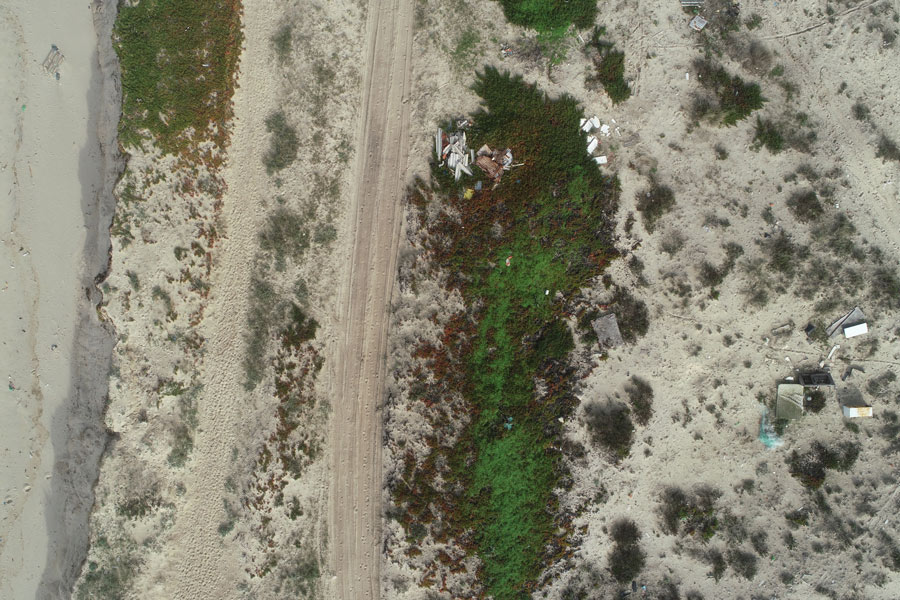 Marine Litter in Beach Dunes
In Coimbra, Portugal, an interdisciplinary team of scientists have been working on using UAVs to perform a task of increasing environmental and ecological importance: tallying and identifying marine litter on local beaches.

Anything which humans cause to end up accumulating in marine habitats is considered ‘marine litter’, and this broad category of materials is becoming an increasingly common sight along the sandy beaches of Portugal’s coast. For the sake of preserving the beauty of the beach for tourists and leisure, environmental agencies, local authorities and businesses may clean up sections of the beach themselves.

However, marine litter also accumulates on coastal dunes, which receive much less attention compared to sandy shores. The wide variety of plants on dunes trap sand and build a natural ground which is an ideal feeding, breeding and roosting ground for numerous bird and insect species. These are fragile but important environments; well-worth protecting.

The first step to understand the state of these environments is documenting the level of pollution. Ecologists are generally reluctant to use traditional census techniques, where people walk on the dunes, for fears of damaging the delicate equilibrium in these ecosystems. 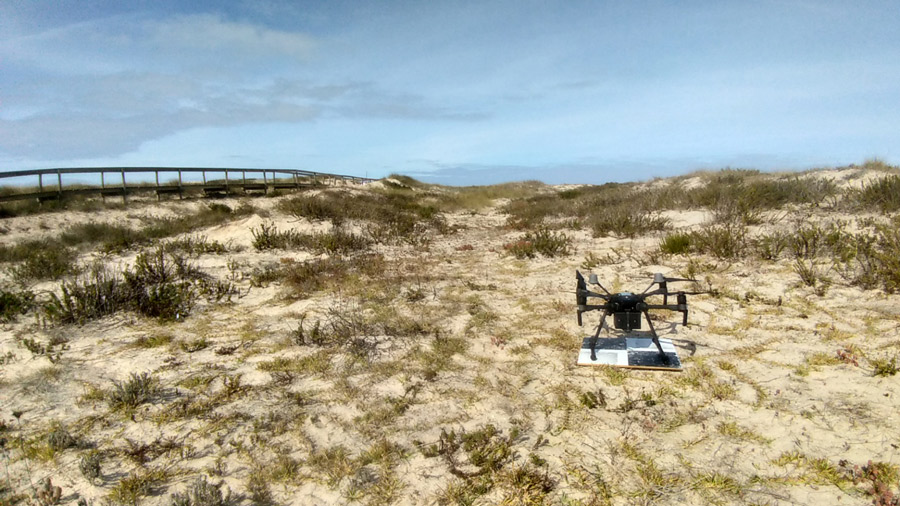 UAS4LITTER
Gil Gonçalves and Filipa Bessa are the coordinators of the project funded by the Portuguese Science and Technology Foundation called UAS4LITTER, which aims to bring low-cost UAVs technology – both the UAVs themselves and the software – to perform mapping and surveillance of marine litter on coastal dunes.

Literature in this area is generally focused on beaches rather than dunes, likely because dunes are less visible, less important to tourism, and are harder to study.

The study involved fitting a drone with a digital camera, and the system was completed with an application which could run on the UAV operator’s mobile phone.

Mapping Marine Litter on Quiaios Dunes
The team chose the Quiaios beach, in a location starting near car parks, houses, hotels and restaurants, and accessible via elevated walkways built to protect the dunes. A boardwalk runs along the length of the dune. The study site was a short section north of the largest car park, next to the final walkway.

Flying at a height of 40 m over the beach-dune, the UAV captured a series of overlapping images to build a georeferenced mosaic composite image measuring 200 m by 80 m.

The researchers used out-of-the-box software which could create a digital surface model. From this image the researchers built a digital model of the terrain to identify features such as sand trails, which is useful for understanding how geomorphic features like sand trails and dune breaches can affect the distribution of marine litter.

To identify marine litter, the image was divided into 2 m x 2 m tiles and screened manually by an operator. Every piece of litter above 2.5 cm was located, identified by type, numbered and identified by colour.

More than 400 items were found, plastic being the most common material (76%) with pieces of Styrofoam (23%) and plastic bottles (20%) being the most abundant. However, paper, metal, glass and processed wood were also found all along the dune.

The value of UAVs
This UAV-based system gives a new impulse to coastal dune litter monitoring. Information about types of litter and their exact location makes it possible to identify trends in how different types of material are distributed.

Almost 70% of the marine litter items were found on the backdune, mostly octopus fishing pots and Styrofoam fragments, but the smaller foredune showed the highest number of objects per m2 which were trapped amongst the plants. The objects on the foredune were more related to recreational activities, most commonly objects such as plastic bottles, bags, papers and napkins.

Three major marine litter hotspots were found, which corresponded to areas known as dune blowouts. These are areas where wind coming from the sea erodes sand away from the dune, and it’s no surprise that these are also major litter pathways, highlighting the major role that wind and water play in contaminating the dunes with litter left by beach visitors.

The future of UAVs in marine ecology
This study demonstrates the value of using UAVs to perform detailed non-intrusive surveys, and gives a new impulse to coastal dune litter monitoring. Anthropogenic litter is a relatively recent phenomenon compared to the age of these ecosystems, and swift action can prevent the effects of long-term residence of marine debris which threatens the equilibrium of these natural environments.

The use of UAVs for mapping marine litter was also an advantage in terms of workload and human effort, taking about three days total from taking the images to finishing image processing, visual inspection and marine litter mapping.

Moreover, on the basis of this survey, the authors can offer advice on how to fix the problem. They recommend interventions to restore dune boundaries where blowouts have occurred, to prevent marine litter being carried further into the dunes by wind and waves, and to replace the open bins along the elevated walkways which fail to prevent litter blowing away, by covered ones. 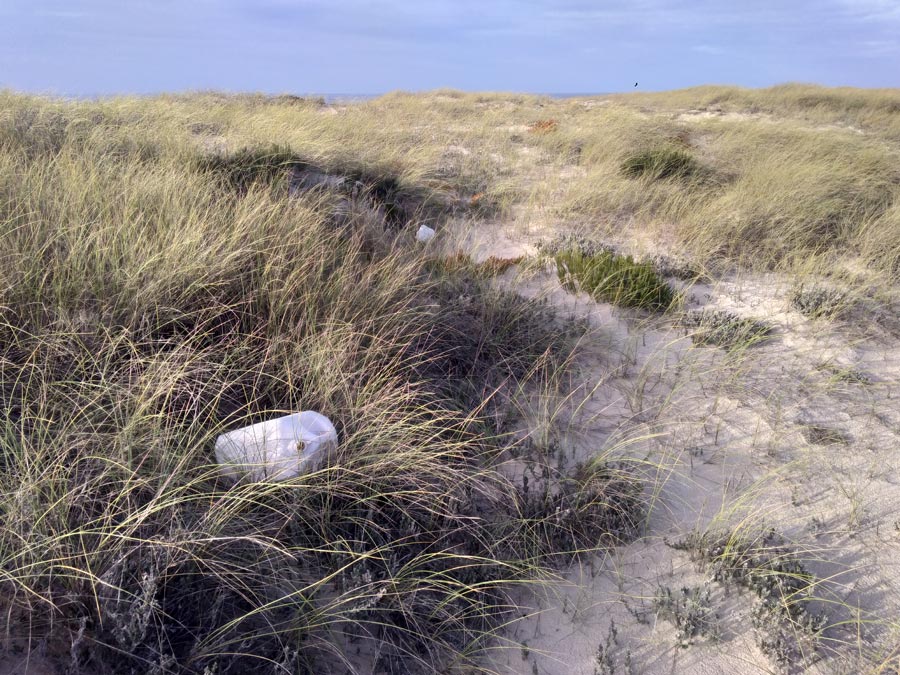 Despite the impact and high expected residence time of marine litter on dunes, there are no national or international programmes which involve their routine clean-up. In the future, camera- and claw-arm-equipped drones could use marine litter maps generated in this study to perform minimally intrusive cleaning of marine litter from dunes.

Your study shows that UAVs can be an efficient and low-impact method of surveying dunes for marine litter. What limitations are there to using UAVs at the moment, and how could these be overcome?

<> With UAVs we can locate marine litter in inaccessible areas, remote areas and also identify hotspots of plastic pollution but there are some limitations, for example the detection of smaller particles (less than 2.5cm) are difficult with the current technologies available at lower costs.

In addition, the experience of the observer to identify and analyse the maps is also mandatory. 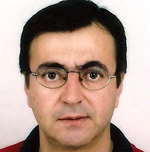 Gil Gonçalves Geospatial Engineer, Professor of Photogrammetry and Remote Sensing at the University of Coimbra. He is also a researcher of INESC-Coimbra in the areas of geospatial computer vision and geo-information extraction from imagery obtained by Satellite, Manned and Unmanned Aerial Systems, Terrestrial platforms and laser scanning data. 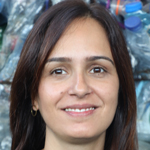 Filipa Bessa Biologist, PhD in Marine Ecology. She is currently a researcher at University of Coimbra (MARE – Marine and Environmental Research Center). Her research focus is related with the issue of plastic pollution on coastal ecosystems and their effects on aquatic species (research, science communication and citizen science).

Umberto Andriolo Civil and Environmental Engineer, PhD in External Geodynamics. He is a researcher of INESC-Coimbra with a focus on remote sensing applications for coastal studies. He develops and applies image-based techniques to analyse beach-dune morphodynamics, nearshore coastal processes, and marine litter abundance and distribution on coasts.

Paula Sobral Biologist, Professor of Marine Ecology and Water Pollution at Universidade NOVA de Lisboa, and President of the board for APLM - the Portuguese Marine Litter Association. She has investigated marine litter and microplastics since 2008, studying their distribution, abundance, and also the impacts on marine organisms. She develops awareness and science communication activities for various public groups.

The UAS4Litter project employs unmanned aerial vehicles (UAVs) to cost-effectively identify and categorise the different types of marine litter on beach-dune systems. The aim is to provide practical guidance for mapping and monitoring marine litter on coastlines to a wide range of end-users, to mitigate marine litter pollution.

This work was supported by the Portuguese Foundation for Science and Technology (FCT) and by the European Regional Development Fund (FEDER) through COMPETE 2020 - Operational Program for Competitiveness and Internationalization (POCI) in the framework of UIDB/00308/2020 and the research project UAS4Litter (PTDC/EAM-REM/30324/2017). The authors also acknowledge FCT-Foundation for Science and Technology (Portugal) through the strategic project UIDB/04292/2020 granted to MARE.