The aluminium mining and refining business provides valuable aluminium metal and alumina from bauxite ores in various locations worldwide. Recent incidents at mine tailing storage facilities exposed the environmental challenges facing red mud management. Mine tailings refer to the leftovers after the valuable fractions have been extracted from the rock. Following gibbsite extraction by the hydrothermal Bayer process, waste products from bauxite ores, composed of crushed rock and solid particles, mostly iron oxides, are suspended in water effluents. The so-called red mud must be left to dry over vast open expanses prior to site remediation and restoration. This is achieved through mud farming treatments of mine tailings performed by heavy machinery at storage facilities; these are costly operations that can last for up to several years. 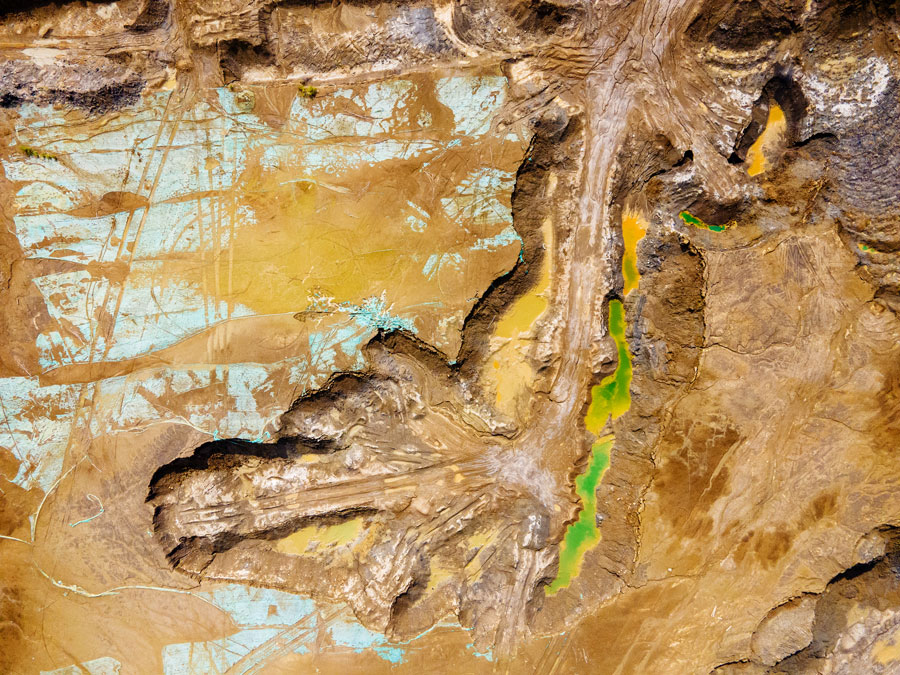 What many people are not aware of are the environmental issues that arise when fugitive dust emissions occur from mine tailing surfaces as they dry. Indeed, exposed surface layers dry much more rapidly than the deeper layers, thereby increasing the risks of particulate matter emissions. Wind erosion causes dispersion and saltation of particles that become airborne. Fugitive dust scattering events can indeed be triggered by updrafts and/or blowing winds conditions when they interact with dry mine tailings surfaces at storage facilities. The meteorological conditions and surface moisture content of mine tailings that make them prone to cause particulate matter to be dispersed over neighbouring communities as well as the environment are often poorly known and difficult to predict. In addition to contamination by particulate matter, acute health and environmental concerns may also result from the dispersion of heavy metals or other toxic pollutants that can be carried by fugitive particulate matter emissions. These could potentially contaminate water and air streams and harm aquatic life. Monitoring the conditions of mine tailings, especially their surface drying state and rates, can improve understanding on how they evolve as a function of environmental parameters and meteorological conditions, the physico-chemical and surface properties of mine tailings, as well as their thermal history and hygroscopy.

Mine tailing monitoring strategies
Monitoring of fugitive dust emissions from mine tailings can be done via several available methods, mostly focusing on water evaporation kinetics and evaporative fluxes. By ‘looking’ at the rate with which water evaporates from the mine tailing surface, researchers try to predict the impact evaporation and tailing dryness will have on the risk of dust emissions. Mine tailing monitoring can been done using various techniques such as reflectometry (measuring the reflection of wet surfaces), permittivity and ground-penetrating measurements, electrical conductivity, and visual inspection.

Monitoring the conditions of mine tailings can improve understanding on how they evolve as a function of environmental parameters and meteorological conditions.

However, these methods cannot be easily applied for continuous field monitoring, and cannot easily differentiate between the surface layer (which is the one of importance here, as it is responsible for the formation of dust upon evaporation of the water that holds dust particles to the ground by capillary forces arising from its surface tension) and the bulk of the mine tailing. Hence, a different method had to be developed to cover the need for efficiency of evaporation kinetics monitoring, accuracy on the monitoring of the surface layer, ability for in situ application, and ease of use for routine, on-site risk assessments. Thermal imaging was suggested as an excellent candidate, covering all these requirements, and providing information to improve understanding of water adsorption on mineral surfaces, water evaporation kinetics and evaporative fluxes, and the influence of environmental factors on them. Information on all these parameters can be influential on our ability to control the fugitive dust emissions from mine tailing, helping solve a big environmental issue regarding the mining industry. 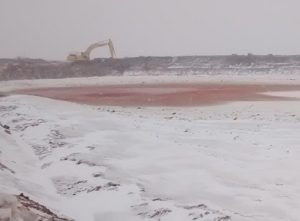 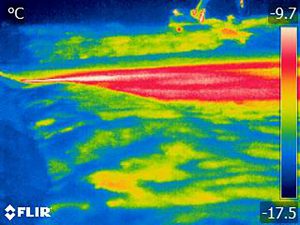 Thermal imaging to monitor water evaporation
The principle behind thermal imaging is based on the fact that all objects emit infrared radiation. Depending on the morphology, structure and chemical composition of the object, the infrared light it radiates can vary; however, given appropriate calibration and validation, the thermal irradiance intensity and spectrum can also reveal its temperature. This non-invasive method uses a specialised camera and relevant software for image analysis. When applied to mine tailing evaporation monitoring, thermal imaging can indicate differences in surface temperature caused by evaporative cooling, as, easily put, the infrared radiation emanating from a dry parcel of the tailing will reveal that it is hotter than that radiating from the cooler, wet parcels.

Based on this idea, doctoral student Josée Maurais and her colleagues from the Université de Sherbrooke in Canada used thermal imaging to monitor bauxite mine tailings and develop understanding on the water vapour diffusion and capillary flow within mine tailings, as well as on water adsorption on mineral surfaces. In the team’s most recent publication, “A thermal imaging methodology to study evaporation kinetics in mine tailings”, Maurais revealed a simple, portable, non-invasive methodology based on thermal imaging to study water evaporation kinetics in mine tailings, which could assist with the forecast of fugitive dust emissions, based on a better understanding of the tailing’s surface drying state.

Water evaporation kinetics of the tailing surface layer
Maurais and her colleagues studied the temperature gradients observed in mine tailings under given environmental conditions through thermal imaging. Based on known information such as the examined sample thickness, the initial water content, the material structure of bauxite residues and their ability to retain water in their pores, their research highlighted the main features that control the drying kinetics of the surface layer of the tailing. Transforming data from raw collected thermal images to surface temperatures, Maurais was able to calculate heat and evaporative fluxes, and, given structural information, she was able to identify water transport mechanisms.

The publication indicates that the initially dominant mechanism is capillary flow (flow through very narrow pores, passages of hair-like thickness), with evaporation rates depending strongly on the thickness of the layer examined as well as on the ambient relative humidity. Past this initial stage, the evaporation regime changes, with temperatures rising (as they were lowered during the initial stage, as significant cooling results from rapid evaporation) until equilibrium between the bulk and the surface layer of the sample and the ambient air is reached. By this point, water transport from the sample bulk to the surface is much slower, with temperature gradients approaching zero as evaporation slows down significantly when water transport become strongly inhibited by vapour diffusion through the dry superficial layers.

Maurais revealed a simple, portable, non-invasive methodology based on thermal imaging to study water evaporation kinetics in mine tailings.

Based on the thermal imaging data, the transition between the first and second stages of mine tailing evaporation was clear. Once the second stage is completed, the temperature of the bulk sample is almost equal to the ambient temperature, and the water content of the sample is equilibrated with the atmospheric water content, indicating that evaporation is no longer taking place, as the drive for it (water content differences, temperature gradients) does not exist anymore. In an effort to quantify how much water was evaporated from the mine tailing, Maurais worked backwards, measuring the uptake of water from dry bauxite samples under the same environmental conditions used during evaporation. This process is called an “adsorption isotherm”, as under standardised temperature and humidity, water adsorbed (stuck) on a specified sample is quantified at the point where there is no more water able to be adsorbed on the porous structure (equilibrium).

Overall, what Maurais showcased with her work was that using thermal imaging, an easy, portable, and industrially relevant method, to monitor water evaporation kinetics and evaporative fluxes of mine tailings allowed for improved understanding on the evaporation mechanisms and rates. This knowledge, combined with information on the structure of bauxite residues, led to explanations for the observed behaviour, and the ability to improve waste management of mining facilities. Despite the limitation of thermal imaging to only provide average evaporation fluxes rather than finer details of the sample area, this technique can be a great start for continuous field monitoring and support risk assessment efforts.

<>Snow albedo feedback is a process by which dust particles decrease snow albedo which, in turn, enhances snow metamorphism, resulting in further decrease in its albedo. This process has major implications on radiative transfer properties in an evolving climate, as well as glacier dynamics and melting. Understanding the effect of fugitive dust emissions from bauxite residues can offer environmental researchers a convenient case to further our understanding of snow albedo feedback.

What are you looking to study next?

<>Fugitive dust emissions can also emanate from frozen bauxite residues during winter. Their impacts on neighbouring communities is exacerbated when deposition occurs over a fresh snow cover. These episodes are much more unpredictable as the underlying mechanisms and rates for water transport within frozen mine tailings are mostly unknown. As evaporation rates from mine tailings are expected to be strongly suppressed during winter as capillary flow is mostly ineffective when water solidifies in frozen, wet bauxite residues, the risks of fugitive dust emissions can be strongly enhanced as a result of ice sublimation in the dry and cold conditions typical of winter in Boreal and Polar regions. 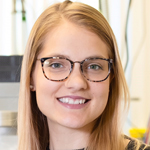 Josée Maurais studied chemistry at the Université de Sherbrooke (UdeS), where she completed her bachelor’s degree in 2017 and her master’s degree in physical chemistry in 2019 on drying kinetics in mining residues. She is currently a doctoral student in atmospheric chemistry at UdeS in collaboration with Seoul National University in the Republic of Korea and the Institute of Low Temperature Science in Japan. Her research focuses on the study of the kinetics and mechanisms of heterogeneous reactions of various atmospheric pollutants at the ice interface.

Maurais is involved in several activities for the promotion of science and next-generation researchers, in particular through the organisation of an Undergraduate Chemistry Colloquium as director (2017) and through her participation in the popular science TV show GÉNIAL! She also contributes to various governmental and academic governance instances whose goals are to identify strategies to make funding for graduate studies more accessible, promote excellence of student researchers, and take part in efforts for the outreach and promotion of student research.

Josée Maurais and her team examine the drying kinetics of bauxite residues to improve forecasting of fugitive dust emissions.