Health & Medicine
Why is Vitamin A critical to animal and human health, and what functions does it have in the body other than in vision? In this thought-provoking and informative interview, neuroscientist and Professor at Harvard University John Dowling takes us through the history of research into the topic, from the first mention of night blindness in 3500 BC to current and future research.

We’ve all heard that eating more carrots will help you see in the dark, but is that factually correct or just an old wives’ tale? Carrots contain a molecule called carotene that is yellow and gives carrots their distinctive colour. Carotine consists of two molecules of vitamin A, which is critical for healthy vision. Vitamin A deficiency leads to a degradation especially to night vision, but there is more to it than that.

Neuroscientist and Gordon and Llura Gund Research Professor at Harvard University, Professor John Dowling has spent a lifetime researching the retina, a piece of neural (brain) tissue lining the back of the eye, but he began by studying the role of vitamin A and its role in vision. In this interview, Research Outreach found out more about Dowling’s research into Vitamin A, why and how it is such a critical molecule and what other biological functions it has in the body of both animals and humans.

John, could you please tell us about yourself?
I’m a neuroscientist and I’ve been interested in vision ever since I was an undergraduate at Harvard University and started research with George Wald, who discovered the role of vitamin A in vision. As an undergraduate and graduate student I worked on vitamin A deficiency in animals but also explored various properties of the photoreceptors which sit at the back of the retina. As I started my own research in the early sixties I became interested in what the photoreceptors were saying to the other retinal cells, and then what was going on in the rest of the retina. I used the retina as a model piece of the brain, which is what I’ve spent most of my career doing. Over the years, my group has been interested in the retinal neurons, their structure, function, pharmacology, genetics, and synaptic interactions as well as their functional organisation. Now I’ve closed my lab, so I’m retired supposedly, although I’m still doing research in the laboratory of a colleague.

Vitamin A is a remarkable molecule. Can you tell us more about it?
Vitamin A is a molecule essential for life, but one that cells can’t synthesise. It has to be obtained through the diet. We find this small molecule in plants mainly; the classic example being carrots. Carrots are yellow because of carotene, which is two molecules of vitamin A that are connected end to end, but many plants contain vitamin A. Also, vitamin A is stored in the liver of animals, which is another good source of the vitamin.

Vitamin A is a molecule essential for life, but one that cells can’t synthesise. It has to be obtained through the diet.

Can you tell us a bit more about the role of vitamin A in vision?
A slightly modified form of vitamin A serves as the chromophore for the photorecptor visual pigments. When attached to a protein called opsin, the visual pigment molecules become light sensitive. The only thing light does in vision is to change the form (shape) of the modified vitamin A chromophore (called retinal) from ‘cis’ (bent) to ‘trans’ (straight). This change in conformation results in excitation of the photoreceptor and the release of retinal from opsin.

There are two types of photoreceptors, rods and cones; rods mediate dim light vision and cones, bright light vision and colour vision. If you have deficiency of vitamin A, this prevents formation of the visual pigments in the photoreceptors and they become less sensitive to light. The first symptom of vitamin A deficiency is a loss of light sensitivity, noted as far back as 3500 BC in the famous medical papyrus describing night blindness. And there was already a prescription for its cure, the eating of raw liver (liver has an abundance of vitamin A). But it wasn’t until the 19th century though, that night blindness was truly related to something in the diet. In the beginning of the 20th century, when vitamins were discovered, it was soon shown that the vitamin A was critical in the case of night blindness. 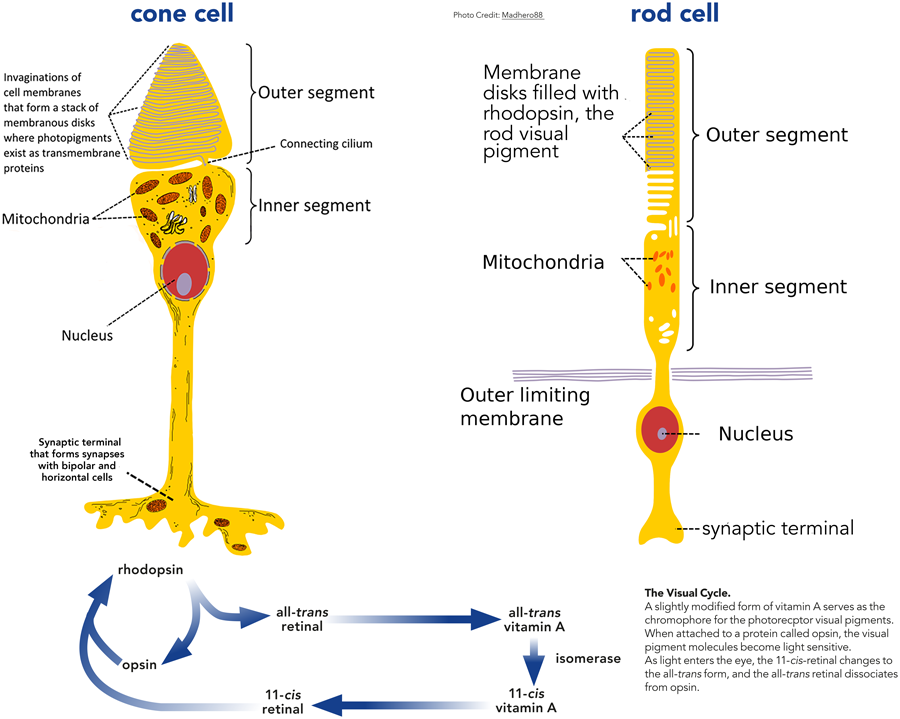 Researchers have since realised that this isn’t the only area where vitamin A can have an impact in the body. Can you tell us more?
As vitamin A deficiency continues animals begin to fall apart. Vitamin A is critical to keep an animal alive, and changes in the epithelial cells are first observed. In the cornea of the eye ulcers would develop and the animals would then begin to lose weight. Further, the epithelial cells in the lungs and other tissues would also begin to deteriorate. And so, it has long been known that vitamin A is not only important for vision, but elsewhere in the body as well. 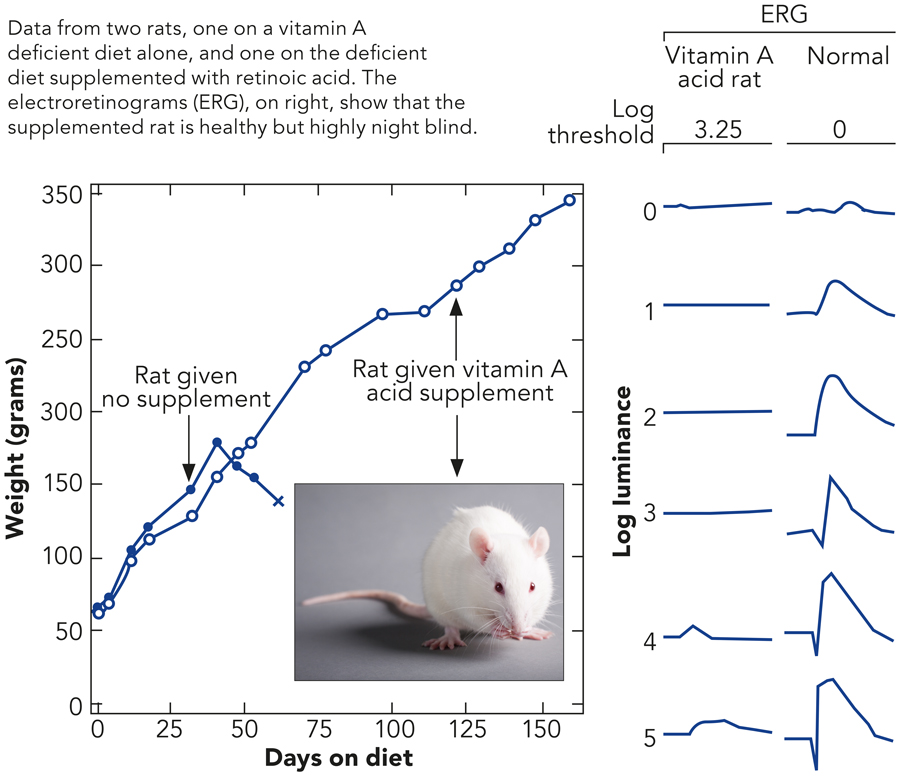 The question in my experiments was whether the loss of opsin was due simply to the loss of the chromophore on the protein or was the loss of opsin due to a general deterioration of cells and proteins throughout the body? That was when we looked at the old literature and found that in the first synthesis of vitamin A in the Second World War, it had been shown that a precursor for that synthesis of vitamin A, vitamin A acid, showed biological activity. It was subsequently suggested that if you give vitamin A acid you could possibly keep an animal healthy, but it would go night blind. As a graduate student, I tested this and showed that you could keep an animal alive on vitamin A acid and looking perfectly normal, but the animals did go blind. At that point in my career I became interested in what happens beyond the photoreceptors but a number of researchers took up the vitamin A acid story and confirmed that all functions of vitamin A seem to be mediated by vitamin A acid, now called retinoic acid, and that this was the active form of vitamin A.

In the 1980s two groups showed that the way retinoic acid works is through specific receptors called RARs, (retinoic acid receptors) or RXRs. Investigators then showed that the RARs are critically important in the development of all animals, but further research showed that retinoic acid was found to affect many tissues and organs in the body. I was then studying the pharmacology of the retina, and was particularly interested in neuromodulation. Neurons are excited or inhibited at synapses in the brain, but it was also known that certain molecules released at synapses, which we call neuromodulators, can modify excitation and inhibition, and one of my former colleagues discovered that retinoic acid in the retina can also do that, thus acting like a neuromodulator. The neuromodulator we had been studying intensely then was dopamine and how it affected all sorts of things in the retina. We then applied retinoic acid during retinal development, and found that it affected not only patterning of the retina, but also the rate at which certain cells, particularly photoreceptors develop. It was discovered in the 1990s that vitamin A deficiency and retinoic acid seemed to be involved in memory and learning, and more recent research has confirmed that retinoic acid activates retinoic acid receptors in parts of the brain that then turn on or off the expression of proteins, proteins that are involved in synaptic transmission. 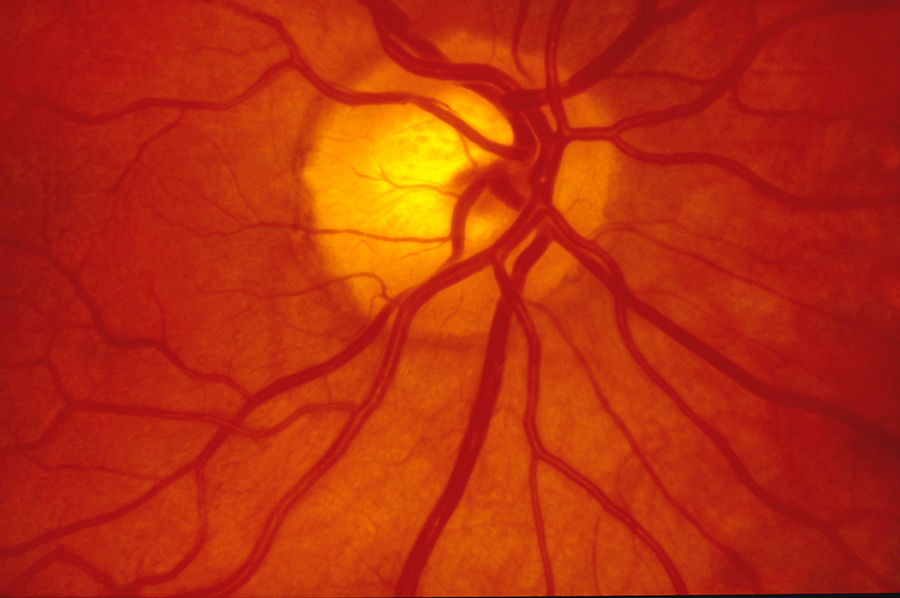 Can you tell us about vitamin A’s role in leukaemia?
Retinoic acid was first used as a treatment for acne in the 1950s and then as a treatment for wrinkles. Researchers then began to apply retinoic acid to cell cultures derived from tumour cells and found that certain tumour cells were inhibited by retinoic acid. None of the subsequent clinical trials were successful except for one form of leukaemia (promyelocytic leukaemia), and there it’s been almost a miracle drug. Whereas that form of leukaemia used to be one of the deadliest, today, if you catch it early enough the remission rate is over 90%.
I suspect we’re going to find that it [vitamin A] acts as a neuromodulator all over the brain.

Where do you see this vein of research going next?
The two directions that I see the vitamin A field going in is first of all a further development of the story of how retinoic acid acts as a brain neuromodulator. It’s been shown in the hippocampus and also in the retina, but where else? I suspect we’re going to find that it acts as a neuromodulator all over the brain. The second is the story of children’s susceptibility to mild vitamin A deficiency and their increased mortality. Studies found that in populations of children who were on marginal levels of vitamin A, all showed night blindness; however, when given vitamin A they were cured pretty quickly of their night blindness, but sadly, a number of these children were dying, and they weren’t dying from night blindness. Nobody dies from night blindness, it is something else, but that something else we still don’t understand. This really needs to be looked at in great detail.

Can you tell us more about your current research?
Now semi-retired, I’m actually working on anatomy again as I did many, many years ago. I am working with Professor Jeff Lichtman and his colleagues at Harvard. Jeff has developed techniques to cut thousands of serial sections of neural tissue, and developed the techniques for reconstructing these images with a special microscope that has 61 separate beams. At the moment we’re reconstructing images from the so-called macula that contains the fovea of the human eye. The fovea is a small indented retinal area, responsible for all of our high acuity vision, such as reading or recognising faces. We’re especially interested in what happens when the fovea is damaged, as happens in age-related macular degeneration, the most common cause of legal-blindness in the western world.

Is vitamin A deficiency still a problem and if so, how do you hope it will continue to be tackled?
Yes. Even though it’s possible to make vitamin A preparations that are very inexpensive, it’s hard to get them to certain parts of the world. In Southeast Asia particularly, they don’t eat many foods that have much in the way of vitamin A in them. So to conclude, the story of vitamin A is by no means complete and it is likely more surprises await with regard to this remarkable molecule.

Vitamin A: Seeing into the past, the present and the future was last modified: February 10th, 2021

Dowling J E., (2021). Vitamin A Seeing into the past, the present and the future Research Outreach, 120. Available at: https://researchoutreach.org/articles/vitamin-a-seeing-into-the-past-the-present-and-the-future/ (Accessed YYYY/MM/DD)

Effective communication in times of risk and crisis: The IDEA model for translating science to the public
Behavioural Sciences
Read This Article
Subcellular dissection of plant immunity towards bacteria
Biology
Read This Article