Community Content
This article has been written and edited by the research team. It has not passed through the quality control procedures applied to content produced by the Research Outreach team.
Real quantum systems are very important due to their various applications in up-to-date quantum technologies. Such quantum systems are open and their inevitable interactions with surrounding environments are of a statistical nature. The composite open quantum systems may be used for doing quantum information and quantum computation tasks. Here, the possibility of using two-qubit systems for solving classification problems is investigated which may be useful for those who work in the field of machine learning, as a subfield of artificial intelligence.

Theoretical concepts: the model and its solution
Open quantum systems undergo dissipation of energy into their environment. The system under study is a two-qubit system which experiences dissipation process due to its interaction with a thermal reservoir (environment) as shown in Fig.1. In this article, the results of this research are presented. The theoretical analysis corresponding to the dynamics of the system can be found in the references below.

Qubit system
As is well-known, a ‘bit’ is the fundamental concept of classical computation and classical information. A classical bit possesses two states like a coin which has two sides i.e., head and tail.  Imperfect coins may present intermediate states (when balanced on an edge, for example) but such a state can be disregarded in the ideal case.

On the other hand, quantum computation and quantum information are built upon an analogous concept, the quantum bit, or qubit for short.

A qubit can exist in a continuum of states between the so-called ground and excited states. It should be noted that when a qubit is measured, it probabilistically gives “0” or “1” as the measurement result. Indeed, a qubit is a mathematical object that usually identifies a ground state with the vector (1, 0), and similarly an excited state with (0, 1) and may be used to introduce a two-level quantum system.

To find how qubits can be realised it may be useful to describe a physical situation. 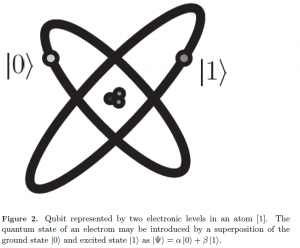 The electron of an atom can exist in either the ground or excited states as shown in Fig. 2. By shining a light on the atom, with appropriate energy and for an appropriate length of time, the electron can be transferred from the ground state to the excited state and vice versa. More interestingly, an electron with initial ground state can be enforced to move (oscillate) between these two states by reducing the time of shining.

Solving binary classification problem via the steady state of the dissipative two‑qubit system
The classification implies assigning objects to one of several predefined categories. It covers many diverse applications such as the categorising email messages based on message header or contents, classifying cells as malignant or benign upon the results of MRI scans, identifying vertebrates as mammal and non-mammal species and so on.

A classifier employs a learning algorithm to find the best relationship between the attribute set and the class label of the input data. The key objective of the learning algorithm is to build a classifier with high performance. Indeed, it should accurately predict the class label of previously unknown records. The details of the basic concept of classification tasks can be found in the related literature.

It is worth knowing how a two-qubit system can be implemented to design a quantum classifier. Indeed, this system can be considered as a noisy channel that transmits information. Such a channel has a finite input alphabet I, and a finite output alphabet O [1]. The initial and steady states of the two-qubit system are encoded as the input and output of the channel. Based on the relation between the input and output of the channel the classifier can be modelled.

Classification of vertebrates
In this section, solving of a binary classification problem is described i.e., a set of vertebrates are classified into the mammal and non-mammal classes. In this regard, the initial and steady states of the two-qubit system are considered as the input and target attributes of the vertebrate problem. The input attribute set includes the features of vertebrates such as their body-temperature, skin cover, method of reproduction, ability to fly and ability to live in water which are given in table 1. The corresponding codes for these features are shown in table 2. (Note: The numerical results and tables can be found at: https://www.nature.com/articles/s41598-021-82880-3). 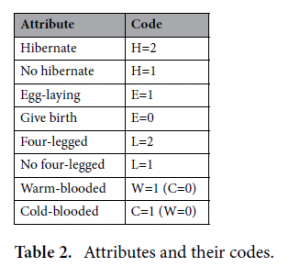 For simplicity of analysis, some integer numbers are considered to encode the features of vertebrates. Besides, a proper normalisation factor is needed to satisfy the mathematical requirements corresponding to the density matrix of the system.

Now, the classification approach and results of a special classification problem are briefly described. At first a set of vertebrate including different species such as mammals, birds, fishes, reptiles and others, is chosen. They are classified based on their features into two groups of mammal and non-mammal vertebrates. In this regard, the analytical expressions of the initial and steady states of the two-qubit system are used for encoding the features of vertebrates and the classification model.

The results of classification are presented in table 3. The fifth column of this table shows that all vertebrates are correctly classified by this classifier, except human and whale. One knows that human and whale are two mammals, while they are misclassified as non-mammal by this classifier. Nevertheless, this is a good result with 87.5% accuracy with respect to other classifiers such as decision tree algorithm, where the results of a typical decision tree are shown in the last column of this table. 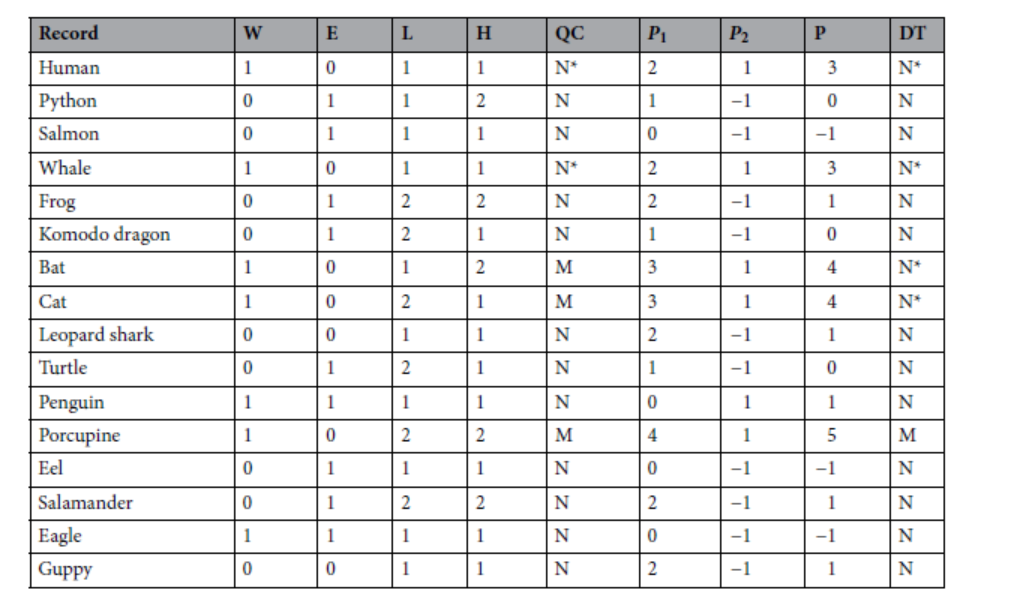 Nielsen, M.A. and Chuang, I., 2002. Quantum computation and quantum information.

Ghasemian, E. and Tavassoly, M.K., 2020. Entanglement Dynamics of a Dissipative Two-qubit System Under the Influence of a Global Environment. International Journal of Theoretical Physics, pp.1-13. 3.

Ghasemian, E. and Tavassoly, M.K., 2021. Generation of Werner-like states via a two-qubit system plunged in a thermal reservoir and their application in solving binary classification problems. Scientific Reports, 11(1), pp.1-16.