Community Content
This article has been written and edited by the research team. It has not passed through the quality control procedures applied to content produced by the Research Outreach team.
This research suggests that an informal institution, religion, can play a significant role in developing a locally driven sustainability framework. In particular, this study investigates Thai context where Buddhism has shaped people's mindset, moral principles and day-to-day economic activity. For the past few decades, Thailand has theorized its own unique sustainability framework - sufficiency economy philosophy - based on the Buddhist worldview of the interrelationships between economy, society, and environment. By shedding light on how religion is formalized as a sustainability framework, this research contributes to institutional approaches to sustainability.

The Thai Sufficiency Economy Philosophy (SEP) framework directly reflects the concept of Buddhism. In fact, the word root of Buddha’s teachings, Dharma (Dhamma in Pali), literally means “sustain.” One of the central doctrines of Dharma is to take a middle path between the two extremes of continuum, namely maximizing growth and minimizing utility or indulgence and asceticism, in terms of people’s daily activity and community development. The idea of a middle path is directly reflected in the core thesis of SEP framework through three practical principles, “moderation,” “reasonableness,” and “self-immunity” (Prudence). These principles promote sufficiency rather than efficiency and maximization logic. Although the thesis was symbolically codified into sufficiency practice in 1970s, it is well known that the late Thai King Bhumibol Adulyadej officially proposed it to the people on December 4, 1997.

The concept of SEP continued to be embraced by many different organizations, such as local communities, government agencies and educational institutions in Thailand – even after recovering from financial difficulties. Thai corporations also quickly adopted and implemented SEP as a part of their strategic principle and sustainability practice. In other words, SEP is not a newly developed framework or policy, but a historical concept from Buddhism.

Over more than 2,000 years, Buddhism has spread across South-East Asia, including Thailand, Laos, and Cambodia. In North-East Asia Theravada Buddhism has flourished, including in China, Korea, and in Japan Mahayana Buddhism has found root. Theravada Buddhist monks explored the construction of our world and the coexistence of individual entities in mutual relationships with it. They try to realize that no entity is entirely free from others and that all individuals are tightly interconnected and interdependent. According to Buddha, phenomena never occurs in isolation. It arises from multiple conditions and numerous sets of causes and effects. Buddhist epistemology defines all individuals within mutual interactions. Buddhist economists suggest that business, society, and ecosystem are tightly interlocked and interdependent. Similarly, Buddhist ecologists claim that community sustainability is deeply rooted in the resilience of larger macroeconomic, political, and ecological systems that offer resources for the community’s functioning and survival and vice versa. All these perspectives have been historically refined and passed onto the subsequent generations of Buddhist monks, forming a distinct worldview in Thai society. Overall, such system thinking of Buddhist worldview undergirds the three elements of SEP framework, that is, “moderation,” “reasonableness,” and “self-immunity.” 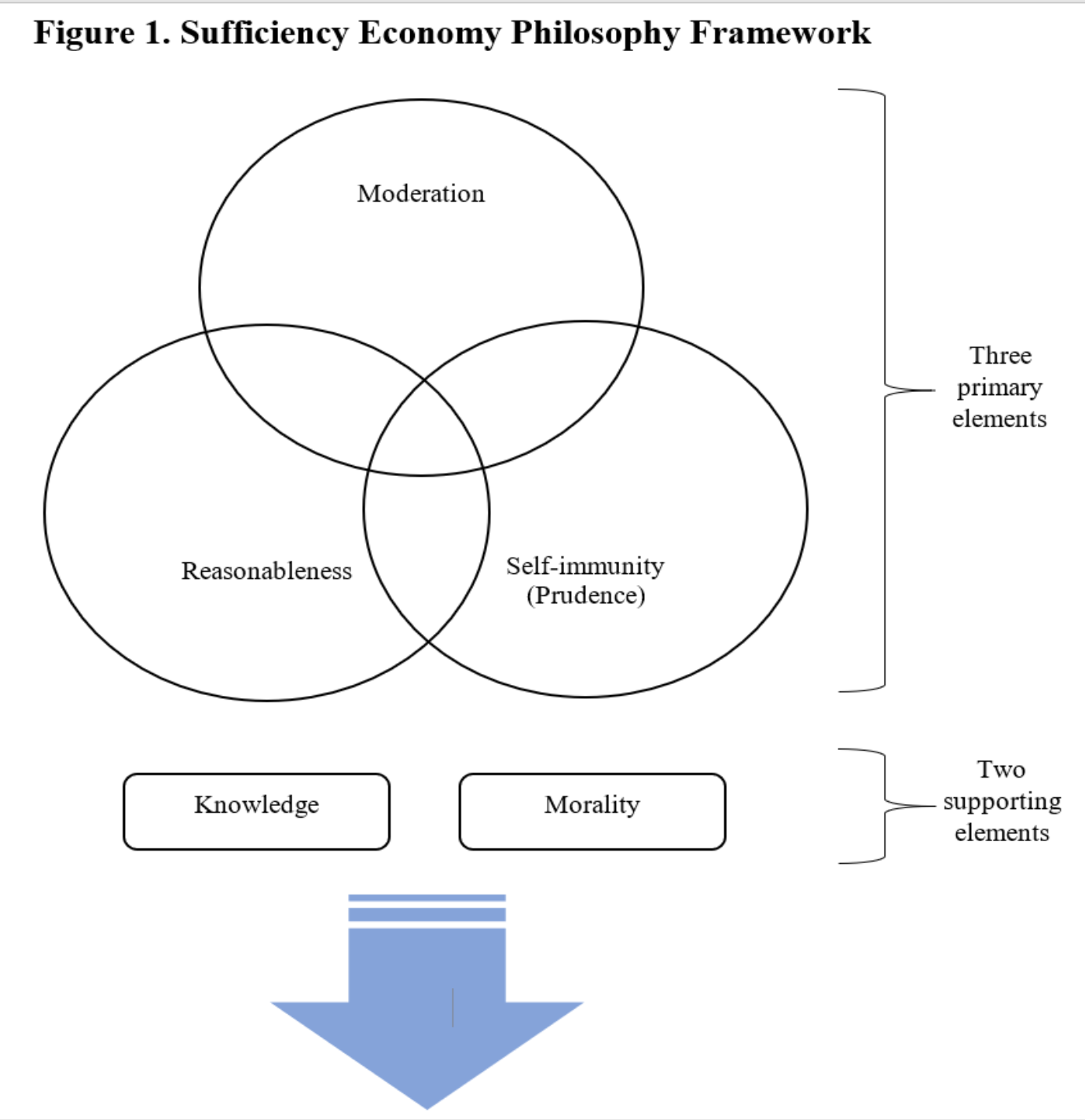 First, the notion of “moderation” originates from the concept of the middle path (Majjhimapaṭipada in Pali), which is one of the day-to-day Buddhist moral precepts. In Thailand, most local communities are historically formed around Buddhist temples. In the communities, people practice the middle path through various meditative methods that aim to reduce one’s desire, self-interest, and overindulgence while pursuing appropriate consumption and satisfaction. Often this is observed when people and Buddhist monks together try to realize that the notion of self-interest actually does not exist in reality. Theoretically, they try to deconstruct self-concept through meditation by dissolving the linguistic and cognitive boundaries between the self and other entities.

The deconstruction of self-concept can explain the moderation element of SEP sustainability framework, as it reduces self-egoistic tendency to over-exploit public resources. Buddhist scholars argue that the dissolved, fuzzy boundaries between the self and world can undermine the utilitarian approach to economy that states maximizing utility alone ensures individual happiness. If one pursues indulgence, then others inevitably experience an equal amount of suffering. From a Buddhist perspective, one’s utility is not entirely separable from that of others. In such a world, there is no “self-interest” but instead “system-interest” exists, which includes highly intertwined utilities of subsystems and individuals.

The nonseparation thesis between the self and world is more explicit in the second element of SEP framework, “reasonableness.” This notion denotes awareness of system thinking inherent in Buddhism. It implies that one should realize how one’s action can influence even invisible entities and cyclically return to oneself over time. In other words, one’s overindulgence is inevitably related to others’ suffering and also leads to the suffering of oneself through a long-term cyclical mechanism.

In Buddhism, such a cyclical thinking is considered as the notion of Karma. Literally, Karma means a deed or action that is intended to happen. It also signifies the outcome of the action, which turns back to one’s suffering or happiness over time. Therefore, in comparison with middle path, which is an ethical principle or moral criterion, the concept of Karma signifies a worldview, knowledge, and a Buddhist approach to define relationships of entities that prevent wrongdoing.

The third element of SEP is “self-immunity.” It characterizes the capability of people and organizations to protect themselves from external disturbances and shocks. The concept is particularly related to community sustainability of rural economy in Thailand. For example, resilience of the farm-based Thai community is an important sustainability issue in North-East Thailand. Nonetheless, climate change issues, disastrous floods, and fine dust from Southern China significantly impact the rural economy, which in turn makes the farm-based community less resilient. Self-immunity is the element that particularly encourages the local communities and people to appropriately respond to external disasters and quickly return to the pre-disaster state.

From a Buddhist perspective, self-immunity emerges in one’s mind through a combination of mindfulness and Karma. Although karma acts as a worldview, mindfulness (Sati in Pali) is a day-to-day practice that aids the meditation practitioners to interpret novel stimuli in less routinized manners and, thereby, quickly respond to external threats and risks. Mindful people identify abnormal environmental changes in a relatively easy and quick manner. Buddhist mindfulness signifies how people use their mind fully to address the external changes by observing the operation of their mind in relationship to the external world. Hence, self-immunity is identical to mindfulness in the SEP framework.

This research aims to illuminate a Buddhism-based sustainability framework emerging in Thailand. The religion has shaped people’s worldview in the region and has played a crucial role in developing the national economic policy. SEP framework for sustainability is historically institutionalized in such a culturally informed context. It is a Buddhist way of sustainability that has been deeply entrenched in Thai way of life.