Physical Sciences
Photonic crystal fibres (PCFs) were first explored in the 1990s, and as conventional optical fibres have revealed their limits, interest in PCFs has only increased further. PCFs use a specific pattern of air-holes which stretch the length of the fibre to guide light. These delicate microstructures are functionally essential, but currently there is no way to monitor their production in real-time. Dr Michael H. Frosz and his team at the Max Planck Institute for the Science of Light in Germany have discovered a novel method which can monitor the microstructure with nanoscale resolution in real-time.

First explored in 1996, photonic crystal fibres (PCFs) are glass or plastic fibres with a carefully designed microstructure which allows them to act as waveguides, meaning that they can carry light beams.

The stranger cousin of fibre optic cables, PCFs are generating interest in the field of optical research because of their potential applications in optical communication, lasers and sensors. 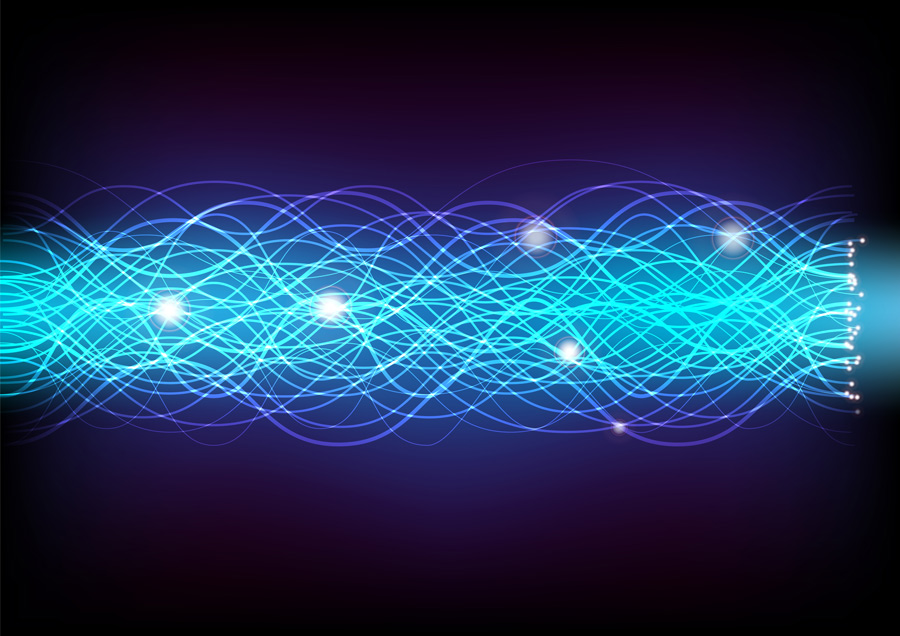 Photonic crystal fibres
Typically, fibre optic cables utilise total internal reflection, an effect caused by a difference in refractive index between the ‘core’ where the light travels and the ‘cladding’. When light meets the boundary between the core and cladding, provided the angle is steep enough, it reflects along the cable.

PCFs by contrast are fibres containing multiple capillaries surrounding a central core. These capillaries or holes generally contain only air. The pattern of these holes is important, and different patterns can change the properties of the fibre. This means that the properties of PCFs can be tweaked to achieve properties which are impossible with conventional optical fibres.

An intuitive example of an advantage of PCFs over conventional optical fibres is that they can be constructed with a hollow core. This allows waveguiding of frequencies of light which would normally be absorbed by a fibre material. PCFs have already found applications in both pulse compression, where sub-picosecond pulses of laser light are created; and for wavelength conversion, where one wavelength is converted to another.

To test the system, Frosz drew almost half a kilometre of PCF whilst analysing the capillary diameter using WGM-spectroscopy.

Stack and draw
These delicate microstructures are constructed in a similar way to conventional optical fibres, starting with a ‘preform’ that has the desired structure but in a larger form. Preforms are generally made from silica, and can be created by drilling the desired pattern of holes, but more commonly are created by stacking tubes in the desired orientation. By heating the end of the preform until it softens and then pulling it, the structure is drawn out into a thinner cable with a diameter around the size of a human hair.

And if these delicate microstructures are hard to construct, then monitoring and quality-controlling their production is even harder. Whilst conventional optical fibres can be measured in real-time during production – which can happen at hundreds of meters per minute – this is not true for PCFs: small changes in temperature or air pressure can have devastating effects on the microstructure whilst having almost no effect on the overall fibre diameter.

Given that cables can reach kilometres in length, achieving low loss in signal quality requires highly accurate maintenance of the microstructure.

There are a number of approaches which can detect deformities in the microstructure. Scanning the structure from side-on, using a technique called Doppler-assisted tomography, can be used to confirm the position of air-holes in the fibre. However, this technique requires that the cable is spinning at about 10 times a second. Whilst this process can characterise the fibre without damaging it, it is slow – each scan takes several minutes – and cannot be performed during the drawing process.

Breakthrough in real-time monitoring
Recent research from the Max Planck Institute for the Science of Light in Germany led by Michael Frosz, Head of the Fibre Fabrication unit, demonstrates how PCF drawing can be monitored in real-time using a process called whispering gallery mode spectroscopy (WGM-spectroscopy). The research is co-authored by Philip St. J. Russell, who invented PCF and then led the research group that first discovered how to fabricate the fibres.

The way that PCFs are manufactured means that the glass around each air capillary is fused to the outer glass jacket. Frosz and his team at the Max Planck Institute discovered that it is possible to illuminate the capillaries by shining a beam of parallel light waves, like that produced by a laser, side-on to the fibre. When the beam of light enters the side of the fibre at a particular point and at a particular angle, the beam of light travels around the entire circumference of the capillary and exits at the same point it entered. Light of certain wavelengths (depending on the capillary diameter) travel more efficiently around the capillary. By measuring the spectrum of the light exiting the capillary, it is therefore possible to deduce the capillary diameter.

A helpful analogy for this process is also the source of its name – the Whispering Gallery – a dome in St. Paul’s Cathedral where sound waves bounce all the way around the inside surface of the dome, in an effect so strong that a whisper is audible on the other edge of the dome.

Whispering gallery mode spectroscopy
Using commercial software to model the technique, Frosz was able to determine a mathematical relationship between the spectroscopic data and the mean diameter of the capillary.

Frosz and his team set up a xenon lamp which can emit light from 400 to 1000 nm wavelength. Frosz directed the light to the drawing tower where a PCF was being drawn. The light was directed by an optical fibre with a collimating lens to ensure the light is mostly hitting the PCF.

A second fibre was used to collect the incident light 60° from the illuminating beam, and delivered the light to a spectrometer. The team constructed a simple analysis process which would automatically take input spectroscopic data and determine the diameter of the capillary being measured in micrometers.

To test the system, Frosz drew almost half a kilometre of PCF whilst analysing the capillary diameter using WGM-spectroscopy. At points during the draw, the air-pressure – applied inside the capillaries to control their size – was increased.

Success with WGM-spectroscopy
Frosz’s data quantifies how the diameter of the capillaries increases as the pressure increases. After fibre drawing was complete, the team sliced the cable at multiple sections, and used conventional techniques (electron microscopy) to determine the actual capillary diameter at each point. Plotting the data on the same graphs shows good correlation between the non-invasive method and the real capillary diameters, confirming the efficacy of Frosz’s novel WGM-spectroscopic technique.

Not only does it allow non-invasive analysis of microstructures with PCFs, it can do so continuously, and is based on relatively inexpensive equipment.

These measurements were made during a draw speed of around 32 meters per minute, meaning that the technique can be used during practical fibre drawing. It is also highly precise, with a resolution of about 90 nm, and measurements deviated from the conventional method by 0.4 μm – only 3% of the value.

Adapting to real-world fabrication challenges
However, the method only measures one of the capillaries in the fibre. To measure multiple capillaries, it is possible to wait until after the cable has been drawn, and slowly rotate the fibre through 360°. The team propose that instead it would be simpler to use multiple optical cables, and illuminate each capillary around the core.

A final challenge of adapting this process to commercial PCF production is that hollow-core PCFs design can vary. Investigations using modelling software suggest that the same technique, with a minor modification to how the spectroscopic data is interpreted, would also be able to handle more complex structures with nested capillaries or split in half. 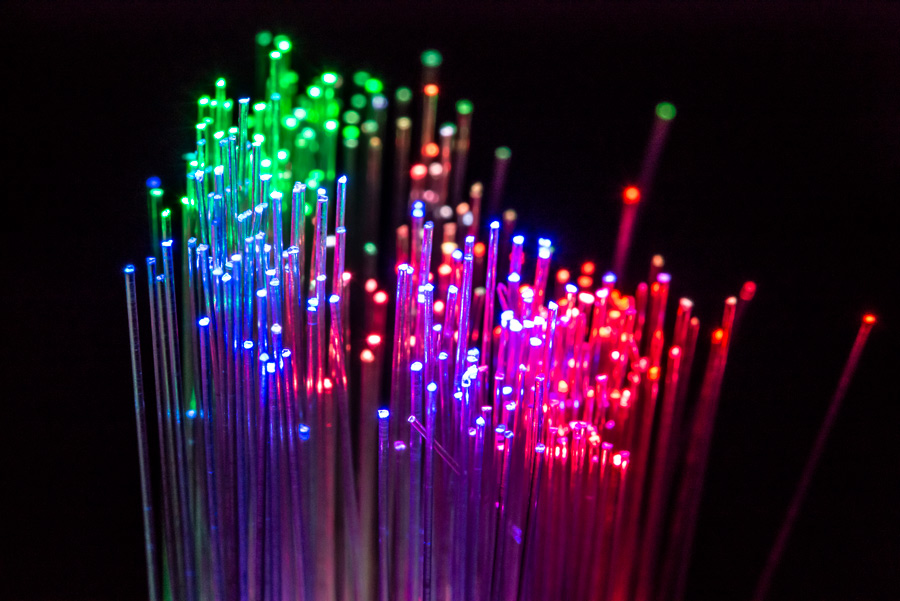 The benefits of real-time monitoring
Optical fibres are a rapidly expanding industry with high-value applications, but limitations of conventional fibres mean that photonic crystal fibres are an exciting emerging field. Whilst fabrication techniques exist which can draw out fibres with complex microstructures, they are delicate and many things can go wrong in their production. Up until now, monitoring this process has been impossible without using destructive techniques.

Whispering gallery mode spectroscopy is exciting because not only does it allow non-invasive analysis of microstructures with PCFs, it can do so continuously, and is based on relatively inexpensive equipment. WGM-spectroscopy could therefore be incorporated into a feedback system controlling drawing speed and air-pressure applied, which could be crucial when drawing out fibres which require particularly low-loss, such as in long-distance telecommunications applications.

You mention that your technique is also able to detect the frozen-in twist in a photonic crystal fibre. Are these twists ever desirable, and if so what application do they serve?

<> For some fibres, we deliberately twist them during the drawing to give the fibre new properties. This can for example make the light in the fibre circularly polarised, or make the light carry so-called orbital angular momentum, a kind of inherent twist of the electromagnetic field. 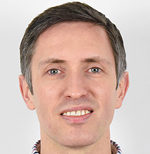 Michael H. Frosz obtained his PhD in 2006 at the Technical University of Denmark. He is currently heading the Fibre Fabrication unit at the Max Planck Institute for the Science of Light, Erlangen, Germany.

The Max Planck Institute for the Science of Light is at the forefront of developing novel types of PCFs and applying them to study light and light-matter interactions.