When observing the light emitted by nearby stars as part of his PhD at the University of Canterbury, New Zealand, Dr David Ramm made a discovery that turned astronomers’ understanding of orbital mechanics on its head. With an orbit lying roughly halfway between two very close stars in a binary system, the nu Octantis exoplanet seemed at first glance impossible. Over the last 20 years, his continuing research and recent space missions (TESS and Gaia) have provided more observational evidence that only supports his unprecedented discovery. But will our exoplanet orbital theories, which will have to be adjusted, be able to confidently describe it? If not, we may have to consider something else, such as an unexpected form of very subtle stellar variability masquerading as this planet – and, no doubt, other planets too.

Situated roughly 70 light-years from our Solar System is the enigmatic ‘binary star’ system nu Octantis (ν Oct). Its two stars complete a full orbit around their common centre of mass in about three years. Only the brighter star (A) is visible, as its close companion (B) has a far smaller radius, making it much fainter. However, due to the well-known ‘Doppler effect’, astronomers have known for a century that B exists. This effect is also where the modern intrigue of ν Oct began.

The Doppler effect describes how light (or sound) waves emitted from objects moving towards us are shifted to higher frequencies, while from objects moving away, they are shifted to lower frequencies. These spectral shifts can be measured as a ‘radial velocity’ (RV). When characteristic changes in the light spectra emitted by a star demonstrate periodic changes to these RVs, they allow for the discovery of stellar variability (such as pulsations), unseen stellar companions and, when used with high precision, exoplanets.

The ν Oct system has been studied from many observatories, including the space-based instruments of ROSAT (ROentgen SATellite), TESS (Transiting Exoplanet Survey Satellite), Hipparcos, and Gaia. None of these photometric observations have found any evidence of significant variations in the physical properties of  Oct A – such as pulsations in brightness or starspots passing across its surface, which could show up in RV measurements of the star. On the whole, ν Oct A appears to be a very stable, slightly evolved subgiant star.

An accidental discovery
Between 2001 and 2004, Dr Ramm initially observed ν Oct A as part of his PhD, using the University of Canterbury’s Mount John Observatory. He had decided to discontinue his search for new exoplanets, which seemed too optimistic for a one-metre telescope. Instead, he did very similar research, such as making improvements to the poor precision of several known binary orbits. His fortuitous study of ν Oct led him to an incredibly strange discovery which continues to defy an easy explanation. It was included because of its brightness (a third-magnitude star), being ‘circumpolar’ at Mount John (ie, always above the horizon), having abundant sharp spectral lines for precise measurements, and having an orbital period suitable for a PhD.

The bizarre formation and orbital mechanics of Oct A’s exoplanet would make it exceptional.

To his surprise, Dr Ramm spotted additional, tiny but distinct RV variations that appeared to contradict the star’s previously recorded stability. Through long-term observations, he discovered that the variations completed a full cycle about every 1.2 years. Since his discovery, these periodic variations have continued to show up in nearly 1,500 observations made at Mount John between 2001 and 2013. Other spectroscopic evidence from Mount John (2001–2020) and recent space mission data (TESS and Gaia) reconfirm  Oct A’s stability. For Dr Ramm and his colleagues, just the original extraordinary explanation remains: that ν Oct A hosts a planet with about twice Jupiter’s mass. Some of this evidence is illustrated in Figures 1 and 2.

‘It now seems that the planet almost certainly exists’, Dr Ramm claims. ‘Quite unbelievably, its orbit lies midway between the stellar orbits which separate the stars by only 2–3 times the distance between the Earth and the Sun.’ The situation is only made stranger by the exoplanet’s necessary ‘retrograde’ orbit – here, moving opposite to the stars’ orbital direction, as repeatedly demonstrated later by theoretical modelling. This scenario remains unprecedented. As he explains, ‘the planet-like RV signal is like the very strong circumstantial evidence at a suspected murder scene without a body’.

Comparing alternative theories
Although many exoplanets have been discovered within binary systems, the bizarre orbital mechanics of ν Oct A’s planet would make it quite exceptional. Typically, planets are found orbiting host stars separated from their binary companion by some 20–100 Earth–Sun distances. Wider separations increasingly diminish the gravitational influence of the companion star, allowing the exoplanet to sustain a stable orbit. But closer separations, as found with ν Oct, greatly diminish the likelihood of planet formation in the first place, at least according to present theories. This is a significant stumbling block for acceptance of its planet.

As with any unusual scientific discovery, Dr Ramm and other astronomers needed to consider if his observations hadn’t been produced by an exoplanet after all, but by another scenario. One new theory that emerged was that ν Oct B is not a single star, but a binary system in itself – creating the illusion of a planet. However, where a third star’s presence would easily modify the A–B binary orbit, it is essentially unchanged from when it was first measured 100 years ago. As a result, the idea was quickly dismissed.

Whilst conventional pulsations and starspots have been ruled out, Dr Ramm has wondered if ν Oct A is part of an entirely new category unknown to astronomers. ‘If ν Oct A is a significantly variable subgiant star (but only detectable with periodic RVs), it would create a completely unexpected new class of stars, and even question the discovery of many other RV-detected planets – both extraordinary alternatives. If this exoplanet is an illusion, which others are as well?’ For now, given the vast number of stars examined by observation and theory, it seems such a variability class would be an even bigger surprise than the planet, with ν Oct A playing a key role in its discovery instead. Other evidence for such a masquerade might be very difficult to find, too.

A prograde orbit becomes retrograde?
Our current theories of orbital mechanics suggest that the exoplanet’s unique orbit hasn’t always been in its present-day position or direction. The anomaly of a retrograde planet orbit, relative to a binary’s stellar orbits, is not so unusual; indeed, retrograde planet orbits have now been theoretically recognised for decades. They actually provide greater stability to such planet orbits since they lessen the duration of the gravitational influence of the companion star – just as vehicles passing in opposite directions on a highway are only close together for a fleetingly short time.

However, the reason retrograde orbits are expected to be rare is simply that stars and planets should form together in orbits moving in the same direction (ie, be prograde). Unfortunately, proving an orbit is retrograde requires very special circumstances, so we actually don’t know how rare they are. But ν Oct presents the first such opportunity – the closeness of the stars demands the present orbit is retrograde since theoretical modelling also shows any prograde orbit is rapidly doomed, whereas a retrograde one appears to be viable, though quite delicately balanced.

Recently identified observations of ultraviolet variability in the 1970s suggest that ν Oct A’s companion star could have evolved via a ‘red giant’ star into a ‘white dwarf’. Normal stars typically first evolve to red giants, becoming potentially hundreds of times larger than our sun. If they don’t have enough mass to collapse into black holes or neutron stars, they become a white dwarf, by shedding the giant’s outer layers to leave behind a far less massive core. Very hot white dwarf stars have similar sizes to that of our Earth, making them very faint, but with a mass comparable to the Sun – just as we find for ν Oct B. Since the orbital mechanics of any system involves an intricate balance between the masses of the stars and planets, and the distances separating them, such a process must have a profound influence on the orbits of them all.

Since creating the present planet orbit from a collision by another passing star is also quite optimistic, Dr Ramm suggests other possibilities: ‘perhaps the planet somehow formed from the red giant’s expelled matter, or began in a typical prograde orbit initially around the companion star, and “star-hopped” into its retrograde orbit by a figure-of-eight pathway, arriving in its retrograde orbit as the white dwarf evolved?’ Related scenarios have already been explored theoretically with some success, though not specifically for ν Oct which would be an extremely demanding test.

Whatever it is, ν Oct challenges what we so far believe our already complex theories – and Nature – can create.

The contribution of ν Oct
Inevitably, with such a fast-expanding body of data, including new surveys from Earth- and space-based observatories, astronomers can anticipate an increasing number of discoveries emerging that will extend our detailed, but still incomplete, understanding of all branches of astronomy, including exoplanets and stellar variability. Although exotic cases such as retrograde orbits within compact binary systems may be exceptionally rare, Dr Ramm’s discovery suggests for the first time that they are possible. Whatever it is, ν Oct challenges what we so far believe our already complex theories – and Nature – can create.

The continued study of ν Oct will shed new light on its formation, evolution, and behaviour. In turn, this discovery could help astronomers make sense of future observations of similarly puzzling star systems. This could lead to a better understanding of how planetary orbits within more ordinary star systems, such as our own, were created and then might evolve.

Do you anticipate that exoplanets with similarly strange orbits could be found in the near future?

At least one other less-demanding suspect is now known. The mystery of nu Oct is perhaps more challenging than many exoplanet predictions, since they are usually based on what we think we know, but nu Oct will be solved by what we don’t yet know. It provides an exciting opportunity for seeing what Nature actually allows, either – more likely – an extraordinary planet, or instead something else just as unexpected. I look forward to seeing this puzzle solved, perhaps with the help of similar discoveries.

The 20-year-old mysteries of nu Octantis: Its almost unbelievable planet – or what? was last modified: November 16th, 2021 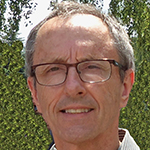 After nearly 20 years as an optometrist, David completed his astronomy PhD in 2004 at the University of Canterbury (UC, New Zealand), when the intrigue of nu Octantis began. He returned to optometry but continued studying the enigmatic system when opportunities arose.

This feature article was privately funded. All other funding sources are gratefully acknowledged in the papers.

This research was supported by UC staff and facilities. The papers name all collaborators as co-authors or in the Acknowledgements.