Health & Medicine
Dr C. James Lim, PhD, is an Associate Professor at the Department of Pediatrics, University of British Columbia, as well as Investigator at the Michael Cuccione Childhood Cancer Research Program at British Columbia Children’s Hospital, Vancouver, Canada. His research group aims to unravel the mechanisms underlying acquired resistance to chemotherapy in childhood malignancies, with the goal of identifying new treatment strategies to improve the odds for children fighting this disease. Leukocytes (or white blood cells) represent the body’s first line of defence against infection, and an effective immune response depends largely on the timely mobilisation of sufficient leukocytes to inflamed tissues.

Leukocytes (or white blood cells) represent the body’s first line of defence against infection, and an effective immune response depends largely on the timely mobilisation of sufficient leukocytes to inflamed tissues.

Leukocyte targeting is fine-tuned via an intricate balance in the interactions between these cells and the environment from which they originate, namely the bone marrow stroma. The stroma generates signalling cues and growth factors for blood cell formation (a process called haematopoiesis) in all types of blood cells, e.g., red blood cells and platelets, in the bone marrow.

ALL out of control
Failures in the processes that regulate leukocyte targeting can lead to leukaemia and other immune diseases. Leukaemia refers to a group of blood cancers that often begin in the bone marrow, and are characterised by very high numbers of lymphoblasts, essentially abnormal and underdeveloped white blood cells.

Dr Lim’s research group focuses on the most common type of childhood cancer, acute lymphoblastic leukaemia (ALL). Dr Lim points out that although treatment outcomes are very good for childhood leukaemia – with a success rate of about 85% – there is concern for the remaining 15% of cases that relapse with drug-resistant forms. Treatment-resistant relapsed leukaemia remains the leading cause for childhood disease-related mortality.

In 2013, the group was the first to illustrate that the α4-integrins play a critical role in chemoresistance in ALL

Integrins in chemoresistance
A small number of cancerous cells that don’t succumb to initial chemotherapeutic intervention may persist as minimal residual disease. These incalcitrant cells represent the most likely starting point for relapsed cancers, which tend to be multidrug-resistant in a manner not limited to the agents used in initial chemotherapy. Dr Lim’s group examines differences in cellular signalling between healthy and tumour cells in order to find clues about how chemoresistance gains a foothold, and how exactly the α4-integrins are involved in that process.

The group made a breakthrough in 2013, when they illustrated that the α4-integrins play a critical role in chemoresistance in ALL. Their findings corroborated with studies from other research groups showing that interactions between integrins and associated proteins were implicated in enhancing tumour cell pro-survival signalling and chemoresistance, in a process known as cell adhesion-mediated drug resistance (CAM‑DR).

Dr Lim’s group first compared the response to chemotherapy in ALL lymphoblasts that either express α4-integrins, or are engineered not to. When exposed to the widely used chemotherapeutic, doxorubicin, leukaemic cells expressing α4-integrins and adherent to the integrin substrate were more resistant to elimination by doxorubicin compared to those without α4-integrins, thereby supporting a direct role for α4-integrins in CAM-DR in ALL.

In a series of elegant experiments, the group then showed that expression of a conserved region (known as a peptide motif) common to all α-integrins was sufficient to promote CAM-DR in ALL cells, and this process involves the coordinate influx of calcium into and the efflux of doxorubicin out of the cells. In essence, a process initiated by cell adhesion via α-integrins enhances the removal of doxorubicin from the cells via molecular pumps, effectively reducing the drug’s dosage within the tumour cell and its efficacy.

The discovery by Dr Lim’s group that CAM-DR is not limited to a particular integrin or type of leukaemia provides hope that future attempts to target CAM-DR with new therapeutic agents will not only improve treatment outcomes for leukaemia, but a broad spectrum of blood cancers.

Enlisting the immune system
The chemotherapeutic toolbox is rather versatile today, and Dr Lim reminds us that “not all anti-cancer drugs are created equal.” Here, he is referring to the fact that certain drugs, including doxorubicin, don’t just kill tumour cells, but also stimulate the immune system to recognise and eliminate cancer cells in a sophisticated process known as immunogenic cell death (ICD).

A key feature of ICD is the presentation of a protein called calreticulin on the surface of cells treated with drugs that stimulate ICD. This cell surface calreticulin then serves as an ‘eat me’ signal for macrophages, a type of specialised white blood cell, to engulf and destroy cancer cells in a process known as phagocytosis.

Solving the ‘eat me’ mystery
Researchers investigating ICD were fascinated by how calreticulin, which is normally restricted to one particular compartment inside the cell (the ER or endoplasmic reticulum), reaches the cell surface during ICD. Dr Lim’s research group shed some light on this mystery when they discovered that calreticulin, released from the ER during periods of drug-induced ER stress, moves through the cytosolic compartment prior to its appearance on the cell surface. While in the cytosol, calreticulin can interact with the cytosolic part of α-integrins, and this interaction only occurs when integrins are activated, either by cell adhesion or upon stimulation with integrin agonists. This means that when integrins are activated, they bind calreticulin, thus trapping it inside the cell, and the ‘eat me’ signal (cell surface calreticulin) is reduced. This finding, reported in a 2016 publication, is the first to demonstrate a direct role for integrins and cell adhesion in diminishing the likelihood of ICD, and have implications in our understanding of effective immunotherapy.

The findings from Dr Lim’s group to date support the notion of the TME being a safe haven for cancer cells, and highlight the TME as a promising target for the therapeutic intervention of leukaemia.

Unanswered questions
Based on Dr Lim’s findings to date, it is conceivable that blocking integrin function might increase the ‘eat me’ signal to potentiate the effect of chemotherapeutic drugs that induce ICD. Targeting α4-integrin function with neutralising antibodies can be an effective therapeutic strategy. However, as Dr Lim points out, complete abrogation of α4 function can lead to potentially fatal outcomes. This is due to the suppression of immuno-surveillance, the coordinated activity of immune cells to seek and detect foreign invaders such as bacterial pathogens. Given the obvious importance of immuno-surveillance, novel strategies that can selectively target α4-integrin signalling in the context of CAM-DR are preferable over complete α4-integrin inhibition.

The exact source of the protective signals that allow tumour cells to acquire chemoresistance is not yet known, but it is likely that the bone marrow stroma harbours these protective stimuli in the form of adhesion substrates and other immune mediators that promote integrin activation. Future work in Dr Lim’s group aims to shed more light on the identity of these stimuli. This research could provide further insight into the potential of integrin signalling as a novel therapeutic target for the treatment of childhood leukaemia and other malignancies.

Are integrin mutations known to be a feature of ALL or other blood cancers?
<>In general, mutated integrins is not a feature associated with malignancies. The roles associated with integrin function in tumour cells are not unlike their roles in normal cells. However, increased expression of certain integrins will likely impact upon treatment response and metastasis. In leukaemias and other blood cancers, increased expression of α4-integrins is a feature of minimal residual disease and a prognostic indicator of poor treatment outcomes.

How far away do you think we are from seeing new anti-cancer drugs targeting the integrins?
<>Due to the fact that integrins are cell surface receptors and therefore readily targetable, a number of integrin therapeutics are in various stages of clinical trials, with some already in clinical use. The majority of these biologics take the form of inhibitory or neutralising antibodies, facilitating the specific targeting of any one of the many forms of integrins expressed in various cells and tissues. For leukaemias and other blood malignancies, pre-clinical studies show that neutralising the adhesive function of α4-integrins can enhance the susceptibility of tumour cells to chemotherapy, while also mobilising those cells that are ‘hiding’ within the bone marrow stroma and other tumour microenvironmental niches.

How likely are we to see resistance to integrin-targeting chemotherapies?
<>I believe the goal for therapeutically targeting integrins in leukaemia is to mobilise the cells from the tumour-microenvironment to achieve effective chemotherapy, thus minimising the occurrence of the residual tumour cells. It is the residual tumour cells that become chemoresistant upon relapse, so the clinical aim will be to minimise minimal residual disease. Resistance to the integrin therapeutic in itself is unlikely. However, the expression of specific integrins within the tumour cells may shift to ones not being targeted, facilitating CAM-DR from another integrin instead.

What would be your biggest concern about treating cancer via integrin targeting?
<>The majority of biologics targeting integrins prevent the adhesion of the cells to target tissues. It is important, in the context of chemotherapy, that integrin antagonists not only prevent cell adhesion, but also prevent the integrins from becoming activated. As implied from our studies on the effect of integrins on ICD (presented as surface calreticulin), certain antibodies may neutralise the cellular adhesive function while activating the integrins (with nothing to adhere to but the antibodies). In this context, we may undermine the immune-stimulating effects of drugs that induce ICD.

Do you expect that integrin-targeting therapies will work for everyone, or are we likely to see groups of patients that won’t respond?
<>It is unlikely to be a ‘one size fits all’ form of therapeutic as the various makeup of the integrins within the types of malignancies may dictate response. In addition, on-going monitoring of the tumour cell biology will be required to determine whether shifts in the types of integrins expressed are seen.

A shining light in the fight against childhood leukaemia? was last modified: July 2nd, 2018 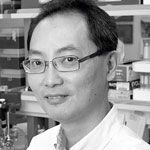 Dr Lim is an Associate Professor with the Dept of Pediatrics, University of British Columbia. His lab is located at the BC Children’s Hospital Research Institute, where he studies the tumour–immune microenvironment and how their interactions influence treatment efficacy. The major focus is evaluating how cell adhesion via integrins and integrin associated proteins provides cell survival cues that diminishes the effectiveness of certain chemotherapeutics.

Dr Lim’s work focuses on understanding the effect of integrins, a group of cell adhesion receptor proteins, on the development of chemoresistance in acute lymphoblastic leukaemia, the most common form of childhood cancer.

The HIBAR Research Alliance: Reinvigorating research for the 21st century
Thought Leaders
Read This Article
Unlocking the mechanism of action of arsenic trioxide in leukaemia
Health & Medicine
Read This Article