Health & Medicine
Dr John LaCava of The Rockefeller University has identified a gap in the current availability of target-specific antibodies for the analysis of intracellular protein-protein interactions. Using the latest antibody production techniques, alongside immunoprecipitation and mass spectrometry, he aims to identify important interactions between transcription factors and other macromolecules which are implicated in disease.

Proteins are vital for the inner workings of cells. Complex networks of interactions form between protein molecules, and because these associations drive cellular activity, an accurate knowledge of them is vital for understanding cell biology and biochemistry. One way of gaining an insight into the protein interaction networks forming within a specific cellular population is through immunoprecipitation – using the molecules of the immune system to bind proteins and draw them out of solution so they can be studied.

Guilt by association
Immunoprecipitation is a molecular technique capable of providing an accurate picture of protein associations. The technique involves breaking open living cells to access their contents, thus releasing a complex mixture of proteins, then uses antibodies to attach to a specific target protein, thereby capturing it and permitting it to be pulled away from the mixture. Importantly, the antibody must be able to bind to its target in the context of the physical associations the target forms with other proteins in the cell, and with minimum off-target binding. When done properly, immunoprecipitation permits groups of interacting proteins to be collectively purified from cells. Co-purifying proteins are said to be guilty by association. That is, if the biological function of one or more of the proteins in the purified group is known, the rest often also prove to be implicated in the same or related biological functions. With antibodies against every human protein, researchers could map the vast networks of protein associations responsible for life. When protein associations go wrong, the resulting altered interactions may lead to disease. The study of these changes therefore has high clinical value.

A census of protein associations
Dr LaCava’s work is important because, despite significant advances in genome characterisation and protein identification, the global networks of protein interactions that occur within cells (dubbed interactomes) remain poorly characterised. It is estimated that 10% of human protein interactions, or fewer, are currently mapped – and this figure does not include the disease-specific interactions which are arguably of most interest. As part of their collaboration with CDI Laboratories Inc., Dr LaCava’s group is currently focused on identifying interactions involving transcription factors, proteins which are master regulators of gene expression and commonly implicated in cancer progression. Changes in these proteins are often responsible for the unregulated proliferation of tumours, so understanding their associations and activities in both the natural and disease states will assist with identifying potential targets for therapy.

Nothing worthwhile is ever easy: discover, optimise, repeat
This task is made more challenging because of the now widely recognised problem that many antibodies are not capable of reliably capturing their target protein and its associated interaction partners. Moreover, even otherwise reliable antibodies may not perform well under all experimental conditions, and protein associations existing in cells are not all equally stable and analytically tractable once they are released from cells and subjected to immunoprecipitation. Therefore, each antibody and immunoprecipitation experiment must be subjected to procedural optimisations, a labour-intensive and often time-consuming process. Dr LaCava and his collaborators at CDI have therefore set about generating and evaluating a suite of new antibody candidates, as well as developing robust processes to use them in optimal conditions.

The process is not entirely straightforward. Protein interactions within cells (in vivo) exist in a highly specific set of naturally occurring environmental parameters. These conditions are inevitably altered during immunoprecipitation, which requires the cells’ contents be transferred into artificial conditions within test tubes (in vitro) in order to mix them with antibodies used for protein capture. An undesirable yet common side-effect of transferring proteins out of cells into an artificial environment is that interacting groups of proteins sensitive to the change will rapidly dissociate from one another – preventing their co-capture during immunoprecipitation. These protein associations therefore remain invisible to detection (false negatives). Similarly, when bona fide interactions dissociate, spurious interactions may form, wrongly implicating these spurious interactions in biological processes linked to the target of the immunoprecipitation (false positives).

Hence, different components of the interactome require different parameters to be in place during immunoprecipitation for the experiment to be robust and results physiologically accurate. To overcome this, Dr LaCava and his colleagues at the National Centre for Dynamic Interactome Research (NCDIR) developed a high-throughput screening method using mass spectrometry based proteomic analyses, allowing precise in vitro conditions to be performance classified. Their results reveal the optimal conditions for immunoprecipitation.

Armed with these techniques, the team are now focusing their efforts on evaluating commercially-available antibodies that target human transcription factors, which have been produced under the National Institute of Health’s (NIH) Protein Capture Reagents Program (PCRP). Their immediate aim is to characterise these antibodies for their ability to immunoprecipitate protein complexes formed with transcription factors within established cell lines. Ultimately, the team plans to use the same techniques to purify transcription factor protein complexes directly from resected patient tumours – exploring compositional differences specific to cancerous states.

A new toolbox for biomedical researchers
Using the building blocks of their screening techniques, specific antibodies, and identified optimum conditions, the team hope to be able to capture a range of complexes for the next stage of the programme.

Presently, antibodies are typically generated on a case-by-case basis. In such a workflow, a protein of interest (such as a recombinant human transcription factor) is, for example, injected into a mouse, provoking an immune response. Antibody producing B-cells are then harvested from the mice and cultured in the lab to provide a renewable source of those antibodies. In the hands of Dr LaCava and CDI, these antibodies are tested for their efficacy in immunoprecipitation, as described above. CDI has made a major advance in the field developing a proprietary monoclonal antibody production pipeline, named Fast-MAb®. Overall, however, this remains an expensive, labour-intensive and time-consuming process.

What if this process could be sped up? In order to meet the ultimate goal of mapping the entire human interactome in health and disease, good antibodies against every human protein and variant are needed. To solve this problem, Dr LaCava and CDI have taken to injecting immunoprecipitated protein complexes, containing collections of physically and functionally linked proteins, into mice. In doing so, they simultaneously raise antibodies against numerous proteins present in the mixture; these antibodies are then validated in immunoprecipitation as above, and used to mine the interactome for new protein associations – generating a virtuous cycle. Dr LaCava hopes to exponentially expand the portfolio of antibodies useful for interactome studies and, likewise, rapidly increase the coverage of bona fide human protein-protein associations.

This approach also has added value. When using intact, endogenously assembled protein complexes as immunogens, some of the antibodies generated may recognise variables that are part of the gamut of naturally occurring protein processing. These may include alternative isoforms and truncations, post-translational modifications, and interfaces formed only when proteins are associated together (referred to as the quaternary structure). Creating reagents that can distinguish bound and unbound proteins, and capture only those protein complexes in a given state of protein associations is a ‘holy grail’ of the field. Another major benefit of this approach is that the resulting antibodies target endogenous protein forms. This alleviates the need to genetically modify cells, appending affinity tags to target proteins in order to purify protein complexes using an antibody against the tag. Affinity tagging is currently used in most interactome studies due to the sparsity of native antibodies available. However, this method is only widely applicable in model cell lines that can be easily genetically manipulated on a genome-wide scale, leaving more disease relevant clinical samples off the table. Taken together, the drive for this research is to provide tools for expanding biomedical research capabilities and findings while also improving reproducibility.

The ultimate goal is of course to improve patient outcomes and develop new drugs capable of combatting cancer. Indeed, the team believe that the intact, purified protein complexes they obtain will provide an unparalleled opportunity to test drug candidates for their ability to modulate proteins as they are found within cells, and in doing so, treat disease. Hence, the benefits of this research are likely likely to be recognised across both diagnostics and therapeutics, as it becomes increasingly possible to quickly characterise the biochemical profiles of tumours and develop weapons against their aberrant activity.

What are the advantages and disadvantages of the high-throughput screening approach?

How big is the market for these sorts of biochemical tools?

What makes you think that this technique will succeed where others have failed?

How will this research impact on cancer diagnosis and therapy?

What is the most challenging aspect of this work? 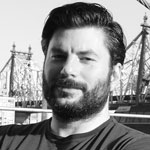 Dr LaCava is a research faculty member at The Rockefeller University and the New York University School of Medicine, Institute for Systems Genetics. He is a senior researcher at the NIH’s National Center for Dynamic Interactome Research, serves as an R&D collaborator and scientific advisor for CDI Laboratories Inc., and has recently co-founded B13LOGY LLC.

Dr LaCava specialises in macromolecular interactions analyses. Working in collaboration with CDI Laboratories, he and his research team are developing monoclonal antibodies capable of binding to constituents of protein complexes found in established and clinic-derived cancer cells.