Earth & Environment
Archaeologists have discovered many relics of our ancestors across the Earth’s surface, but much more remains buried beneath the soil. Archaeological prospection plays an important role in both the identification of these special sites and their protection. Dr Athos Agapiou of the Cyprus University of Technology, at the Department of Civil Engineering and Geomatics and the Eratosthenes Research Centre, develops new approaches for the detection of buried remains. By using images and data collected from satellites, researchers can identify the archaeological proxies that indicate where buried archaeological sites remain as-yet undiscovered. Earth Observation data continues to play a greater role in research and could provide archaeologists with an important tool for cultural management.

The surface of Earth is covered in the relics of past human civilisation, from tiny fragments of pottery and tools to majestic buildings that represent the pinnacles of technological achievement by our ancestors. Archaeologists hope to unravel some of the mysteries of our ancient cultures and their evolution by studying what is left behind, which is often preserved beneath the soil.

As our population grows, our society often encroaches on archaeological sites of interest both knowingly and unknowingly, putting them at risk of destruction as we urbanise the landscape. Throughout history, and even today, archaeological sites have also been plundered and looted by humans, often for profit as items are sold via black market trade. This has occurred in sites already known to archaeologists as well as in those yet to be identified by researchers. If these previously unmapped areas are destroyed or looted, irreplaceable information about history is lost before it can even be recorded. Reliable identification and protection of archaeological sites is vital for effective heritage and cultural management, which helps to enable sound archaeological research and protection of sites of interest for future generations.

Dr Athos Agapiou of the Cyprus University of Technology, at the Department of Civil Engineering and Geomatics and the Eratosthenes Research Centre, is interested in developing new ways to discover and map areas of potential archaeological interest. These methods of archaeological prospection must be non-destructive and capable of studying large areas of ground in order to identify the location of relics or structures that remain buried. This style of archaeological prospection can provide both researchers and the organisations that manage cultural and heritage projects with accurate information about the character and distribution of local archaeological records.

Methods of archaeological prospection must be non-destructive and capable of studying large areas of ground.

Spotting archaeological sites
The search for archaeological sites has become far more technologically advanced since the early exploration days. Structures that remain buried, such as walls or ditches, change the nature of the vegetation growing on the surface above them. These features can affect the water content and organic matter available to the plants within the soil, which in turn will affect how well the plants will grow, as well as cause changes in texture or colouring.

These changes in plant features were initially mapped from high vantage points, and the first widespread archaeology surveys were completed using aerial photographs. These differences in plant growth can be clearly seen from above and the markings are known as crop marks (not to be confused with crop circles: the markings that are formed artificially). Today, archaeologists utilise remote sensing techniques from satellite observations to identify locations of potential buried remains using these archaeological proxies. Satellites provide scientists with the ability to image Earth’s surface to a high resolution and measure the radiation (or sunlight) that is reflected by the surface back into space. Researchers now have access to vast amounts of data and images of the Earth’s surface, and Dr Agapiou and his colleagues are developing efficient ways for archaeologists to use this information.

Geoinformatics and Earth Observation data
Dr Agapiou is a specialist in geoinformatics. He researches and develops new methods for archaeologists to use to process and analyse the data collected by remote sensing in order to build maps and identify areas likely to contain archaeological records. Archaeologists have already been using satellites that can optically image the Earth to detect buried remains, as well as study changes over time (temporal changes) in the landscape and predict new potential locations of archaeological sites using statistics and spatial analysis. Now, other types of satellite sensors are included in Earth Observation data, such as radar sensors and interferometry (measuring the movement of waves such as sound and radio). Archaeologists can now study the Earth’s surface and the way it reflects wavelengths of light that are outside the visible light spectrum. All this information creates massive, complex data sets that are constantly being updated. These types of data sets are often known as big earth data, and their storage, processing and use are starting to play major roles in our society.

The challenge for using such large and complex data lies in its processing, with many stages and applications of complex algorithms, as well as being able to accurately describe the quality of the data. Dr Agapiou has made some of the first attempts at using big earth data for archaeology research. Using an online platform to manipulate a big data set that included data from the Landsat satellite (unmanned US scientific satellites), he applied a series of mathematical equations to create a model that could identify areas on the Thessaly plain (Greece) containing archaeological sites of interest. He also showed that these types of data sets could be used to study urban sprawl using satellite imagery of night lights over a period of 20 years. Encroaching urbanisation is a risk to delicate archaeology sites, so mapping the spread of settlements is important for their protection.

Complexity of crop marks
Part of the challenge of using satellite data for the detection of buried remains is that crop marks are highly variable. The underlying archaeology structures may cause plants to grow taller and healthier, or smaller. Healthy plants can have darker foliage, whereas unhealthy plants may be lighter in colour. This complex variation is reflected in the spectral characteristics measured by satellites and creates another challenge for the use of remote sensing in archaeological prospecting.

Crop marks can be identified from satellite imagery due to their contrast with the surrounding area. This means they are easy to spot within a single field that contains a consistent, homogenous vegetation type. These crops will reflect sunlight at the same wavelength unless the plant varies slightly where it grows above an archaeological structure. This contrast can be most easily seen in the infrared and red edge of the light spectrum. Satellites can provide a sub-metre image resolution, which has been used to build semi-automatic systems of detection.

Dr Agapiou’s research hopes to address the problem of accurately detecting buried remains when they lie in a non-homogeneous area – meaning there are different types of vegetation or soil that cause a poorer contrast due to the extra unwanted information or ‘noise’, making it more difficult to pick out background features. Dr Agapiou successfully demonstrated that this issue could be overcome by using a method that combines suppression of the surrounding vegetation in images of a case study area with complex algorithms that can suppress the reflectance of the surrounding vegetation to identify crop marks. His initial work, using a known archaeological site in Cyprus, successfully demonstrated that this novel method worked well for interpretation of archaeological features in a non-homogenous area, and Dr Agapiou suggests that continuing to develop the algorithms used within the model will further improve the results.

Synergistic use of sensors
An additional challenge for the use of remote sensing for identification of potential archaeological sites of interest are the differences in the types of data produced by satellite measurements. The data can differ in terms of satellite sensors’ abilities to resolve different wavelengths of light, as well as varying in both spatial and temporal resolution. In order to accurately identify sites, researchers need to analyse a variety of data, including both visible light images and spectral data. This cannot be gathered by one single satellite, so a synergistic use of sensors for archaeological research is crucial. Dr Agapiou demonstrated how multiple sensors can be used together to identify crop mark archaeological proxies using data obtained of the Thessalian plain (Greece) from the European Space Agency Sentinel-1 and -2 sensors. These provide different types of images to varying spatial resolutions but were successfully used together for archaeological prospection.

Whilst there is some further development required, the use of advanced remote sensing and big earth data is going to be essential for preserving existing archaeological sites and for the accurate detection of buried remains. If researchers can successfully automate and improve the accuracy of identification of crop marks as an archaeological proxy, it will be of great advantage to those bodies that protect existing archaeological sites and provide cultural management, as well as to the archaeologists that advise them. It is important to ensure that humanity’s history is preserved for as long as possible for future generations to appreciate.

What first sparked your interest in geoinformatics and the use of big earth data in archaeology?

Archaeology from space: Using Earth Observation data to unearth our past was last modified: May 4th, 2020 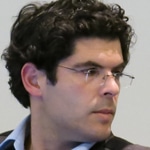 Dr Athos Agapiou explores the synergies between remote sensing technologies in order to meet the needs of archaeological prospection.

The author would like to acknowledge the “Synergistic Use of Optical and Radar data for cultural heritage applications” project, in short “PLACES”, under the Research and Innovation Foundation grant agreement CULTURE/AWARD-YR/0418/0007 funded by the Republic of Cyprus.

Agapiou, A. (2020). Archaeology from space: Using Earth Observation data to unearth our past. Research OUTREACH (114). Available at: https://researchoutreach.org/articles/archaeology-space-using-earth-observation-data-unearth-past/ (Accessed YYYY/MM/DD)

Collaborate to innovate: How the InSPIRE Center at UCLan Cyprus brings together academics and industry
Thought Leaders
Read This Article
Creating a paradigm shift in plant breeding and plant phenotyping
Biology
Read This Article

One thought on “Archaeology from space: Using Earth Observation data to unearth our past”