Health & Medicine
Over the past few years, researchers have developed many new techniques to collect information from our genome. This can help identify inherited conditions and some types of cancer, for example. However, these methods have often been kept within the limits of scientific research. Now, Australian Genomics is keen to push their use into a clinical setting, where they can benefit more patients and their families.

Less than ten years ago, genomic sequencing was restricted to the realms of scientific research. Today, methods are getting easier and cheaper, and the technology is finally being applied widely in a clinical setting. Some estimates state that it has the power to help more than 60 million people over the next few years.

Given the potential benefits, it is not surprising that many governments are eager to support its implementation into healthcare systems. At the moment, over 20 countries around the world have invested a total of US$4 billion to establish large-scale initiatives to promote the transition from research centres to mainstream medical practices.

Despite this money injection, implementing genomic medicine on a large scale is a complex issue. It is one thing to use these methods in a single institution, or even in multiple organisations with close links, but applying the same principles to a whole healthcare system requires an entirely different approach.

In some countries, this is more difficult than in others. The UK’s National Health Service has allowed for a centralised approach, in collaboration with Genomics England. In Australia, which is a federation of states and territories, public healthcare is shared between state and federal governments. And that, says Australia’s Professor Kathryn North, requires a co-ordinated, whole-of-nation approach.

Australian Genomics
The Australian solution came in the form of a new nationwide network called Australian Genomics. Established in 2014, it includes more than 80 organisations from research and academic groups, to diagnostic laboratories and clinical services, located across all six states and two territories. In the following year it was awarded AUD$25 million by the National Health and Medical Research Council to analyse the challenges and opportunities related to the integration of genomic medicine into the Australian healthcare system.

On the plus side, the study identified several research and clinical centres ahead of the game. These groups were already collecting samples from their patients and performing genomic testing to identify specific conditions. In contrast, the federated model of healthcare between state and federal governments was identified as a challenge potentially leading to duplication of effort and inefficient use of resources.

All of these large-scale initiatives have the opportunity to transform health care systems by integrating genomic technologies into clinical care.

Building national clinical and research networks: Flagship projects
At its inception, Australian Genomics established flagship projects – prospective clinical studies interrogating different genetic disorders – to evaluate how to deliver genomics in healthcare in different clinical settings. In the past five years 21 rare disease and cancer flagships have been launched across 32 clinical sites. Many of those have wound down, but new projects have launched under another national funding scheme. All projects continue to use an entire network of scientists, clinicians and genetic counsellors dispersed across the country to maximise available resources.

The main aim is to recruit patients for genomic testing in specific diseases, not only to improve diagnostic rates, but also to study disease mechanism and facilitate access to clinical trials. These projects also provide a way to assess the impact of genomic medicine, including how much it costs to carry out testing and how easy and accurate it is to reach a diagnosis. In technical terms researchers and clinicians have a variety of tools at their disposal, including whole genome sequencing, whole exome sequencing, mitochondrial genome sequencing, and RNA sequencing.

One study for example is using genomic sequencing to diagnose children in intensive care. The pilot study of over 100 infants and children from various sites in Australia showed that it is possible to use a national and highly-coordinated genomic diagnosis programme to provide ultra-rapid diagnoses for these children; doctors were able to identify more than half of the children’s conditions, and in just three days. It’s an ambitious and novel approach – a world first in conducting ultra-rapid rare disease diagnosis across multiple centres over a significantly large geographic footprint. This approach has the potential not only to make rapid diagnosis a reality in intensive care, but also to substantially reduce overall costs. Critically, it can be life-changing for the patient and their family who, once having a diagnosis, can plan their child’s future health care.

Building the foundational infrastructure for genomic medicine
Running in parallel to the flagship projects are four programmes of work that are building the foundational infrastructure for a nationally-consistent approach to the use of genomic testing in mainstream healthcare. The programmes span i) workforce and education, ii) policy and ethics, iii) data federation and analysis, and iv) a national diagnostic network, and engage a wide range of expertise including data specialists, lawyers, economists, policy analysts and educators – the disciplines that will underpin effective implementation.

Although clinical genomic testing is still done exclusively in accredited laboratories, Australian Genomics has embraced the task of assessing current practices and developing a national approach to how consent is discussed with patients, as well as designing patient information resources. Another key priority is to establish standardised data storage and management solutions for the immense amount of data generated during genomic testing in some of its flagship projects. Australian Genomics also brings together experts in health economics, ethics and law to develop new policies and clinical practices adapted to genomic testing. All programmes also focus on workforce needs, upskilling health professionals and identifying appropriate educational tools to do this.

Australian Genomics believes it has a responsibility to fast-track the implementation of genomic medicine and deliver its benefits to patients and their families.

In 2018 the Australian Government sent a further signal of its support for genomic research and medicine when it committed AUD$500 million over 10 years to a new entity, the Genomics Health Futures Mission. The GHFM builds on existing research and funds new projects such as the AUD$20 million reproductive genetic carrier screening study, Mackenzie’s Mission, which is administered by Australian Genomics. The carrier screening study is expected to pave the way for the introduction of reproductive genetic carrier screening nationally.

International partners
Australian Genomics is a ‘driver project’ of the Global Alliance for Genomics and Health (GA4GH). The main aim of the GA4GH is to develop technical standards and policies to allow the sharing of clinical and genomic data in a secure and ethical manner. As a driver project, Australian Genomics contributes to the development of new tools and standards, testing them under real-life conditions and supporting their dissemination in clinical settings.

The only way for there to be successful sharing of genomic data on a world-wide scale is to promote uniform standards and practices for data capture, access and sharing. This has led to the establishment of Genomics in Health Implementation Forum, which was developed by Genomics England and Australian Genomics as driver projects of the Global Alliance for Genomics and Health. The forum meetings bring together experts from more than 30 large scale initiatives around the world with a view to identifying opportunities for in-depth collaboration and resource sharing. In practical terms, the group is currently working on a web resource to make it easier to share information across different initiatives and list contact details for specific areas, such as ethics and data security.

Bridging the gap
Over the past few years, Australian Genomics has built a national network with the ability to adapt to new procedures and promote the move from a research setting to clinical operations. Professor North says it is fostering an approach that brings basic genomic research and its clinical application much closer together.

It has not been easy to get to this stage, and the journey is only beginning. The hard part is going to be to implement genomic testing in routine clinical diagnosis, the same way blood samples or X-rays are done. Australian Genomics believes it has a responsibility to fast-track the implementation of genomic medicine and deliver its benefits to patients and their families.

“Over the past five years, with federal research funding, Australian Genomics has quadrupled in size, consolidated national and global genomic engagement, and has exceeded delivery on research and clinical outcomes,” says Professor North. “We have proved that this approach works and that it can now be built upon to support the rapid translation of genomic research into clinical practice.”

How many Australians can this project potentially benefit every year?

<> About 2 million Australians, or 8 per cent, live with a rare disease. A disease is considered rare if it affects fewer than five in 10,000 people. More than 7,000 rare diseases are life threatening or chronically debilitating. https://tinyurl.com/y3jyj3dm

More than 80 per cent of rare diseases are genetic. Due to their complexity they can take some time to diagnose, with patients often undergoing what is known as a long “diagnostic odyssey”. Genomic testing is particularly successful in diagnosing these diseases.

Australia’s Genomics Health Futures Mission aims to save or transform the lives of more than 200,000 Australians through genomic research to deliver better testing, diagnosis and treatment. 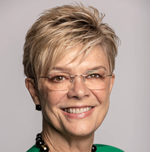 Professor Kathryn North AC is the Lead of Australian Genomics, Director of the Murdoch Children’s Research Institute and Vice-Chair of the Global Alliance for Genomics and Health. She trained as a child neurologist and clinical geneticist, and has doctorates in neurogenetics and genomics. She chairs the International Advisory Board of the UCL Great Ormond Street Institute of Child Health (UK).

Taking genomic testing from the lab to the clinic, Australian Genomics is closing the gap between basic genomic research and its clinical application, building evidence to inform national health policy as genomics becomes standard of care in Australia’s healthcare system.

Australian Genomics has an extensive network of more than 80 partners and 400 collaborators. See more at: https://www.australiangenomics.org.au/partners/