Biology
There is a huge amount of diversity in the shape of different crops, be it a fruit such as tomato or a vegetable such as carrot. Ultimately, the appearance of a plant organ is determined by different cellular control mechanisms. However, it is not known whether these mechanisms are similar across various species in the Plant Kingdom. Dr Esther van der Knaap, Professor at the University of Georgia, and her team have studied how variations in crop shapes can be controlled by cellular machinery that is conserved across species.

How do you like the shape of your tomatoes? If you look carefully at different types of tomatoes, you might notice that there can be a variety of sizes as well as shapes. Whilst the general view might be that most tomatoes are somewhat round, they can in fact be oblate, pear-shaped, obovoid, torpedo-shaped and bell-pepper shaped, and also small, medium or large in size. Moreover, have you ever wondered why the crop shapes of tomato, eggplant, pepper and potato, all from the same family, differ so much? Or why crops from different families might have similar shapes? This is the focus of research of Dr Esther van der Knaap and her team funded by the National Science Foundation and United States Department of Agriculture. 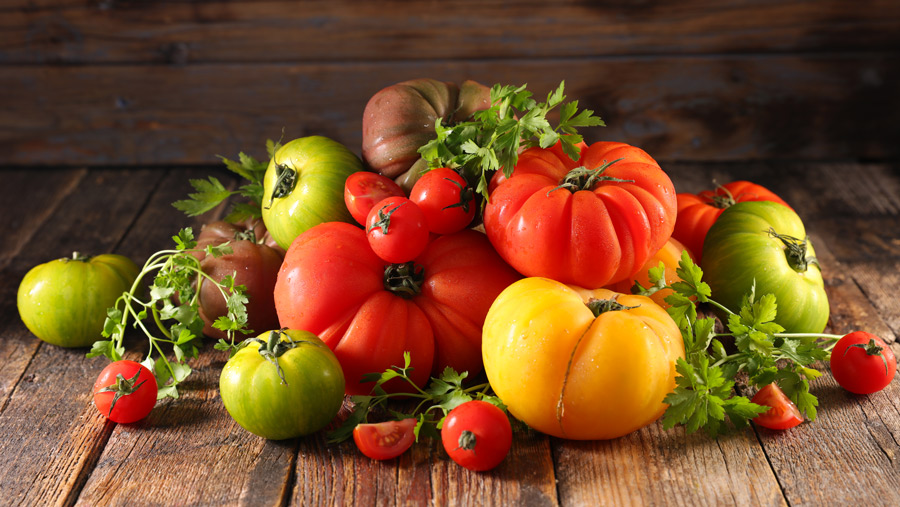 DNA is the flavour of variety
The reason behind this diversity in size and shape of tomatoes is all to do with genes – just like members of your family might be different to you, because of their genes. A gene is a set of instructions given as a code in the DNA, a molecule inside cells of any living organism. The instructions vary, from what the shape or size of any part of the organism should be, to how the organism should behave, or what qualities (traits) it has. The genes are translated into molecules called proteins that give rise to the properties of the organism. Genes are inherited from an organism’s parent, so in the case of plants, the parent plant(s) breed to give rise to the next generation, and thereby genes are copied.

Since the time of hunter-gatherers, humans have cultivated plants to suit their needs. This has led to a huge amount of diversity of crop shapes and sizes, depending on the organoleptic qualities desired by humans. Wild fruits that were not cultivated stayed small, so their seeds could be easily spread by animals that ate them, thereby ensuring their succession. However, early humans probably desired larger fruits that were tastier, and therefore selected plants for these traits. Bigger fruits also resulted in a change in their shape, resulting in variations in fruit size and shape. These variations arise by mixing of genes from breeding, as well as evolutionary changes. 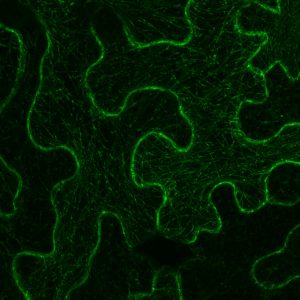 What makes a particular shape?
The term “shape” in biology is defined as external form/appearance. In the case of plants, it means what a part of a plant (organ) looks like, be it a leaf, a flower, fruit or root. Organs such as fruits are made up of tissues, which in turn are a group of cells. A cell is a basic building block of life, and has many important properties, one of which is division, allowing tissue growth. In plant cells, the outermost structure is a cell wall, which is something missing in animal cells. Cell walls give shape and form to a plant cell, determining whether it has to be long, tall or round. The composition of cell walls is regulated in part by the cytoskeleton, a term given to many protein fibres (such as microtubules) that transport proteins and membrane-enclosed compartments, as well as facilitating cell division. Together, the cytoskeleton and cell wall enable the correct numbers of division and expansion of cells, and thereby, growth and organ shape.

The composition and function of the cell wall and cytoskeleton are regulated by genes that are at the core of a cell’s function. The appearance of a fruit (like tomato, which is from a fertilised flower) or a vegetable (like potato, which is an edible part of a plant not from a flower) is determined by the genes that regulate its size, shape, colour and composition. Although many common genes result in similar flower and plant structures, other genes are distinct to each member (e.g. tomato, eggplant, pepper) that result in a variety of flavours of the fruit or vegetable, such as the spicy capsaicin only found in peppers. What about appearance? Are genes common across species resulting in similar appearances? Recent findings from Dr van der Knaap and colleagues found that genes common to tomato and potato control their shape.

The OVATE, SUN and TRM family of genes are commonly associated with controlling shape in crop plants.

Appearance matters
As the famous poet John Keats wrote, “A thing of beauty is a joy forever.” This is true in everyday life for us humans, as we would probably be more attracted to something more beautiful to the eye, than something that isn’t. For example, most people would rather pick a tomato that has a perfect shape, than one that is mis-shaped. What controls these shapes of fruits? 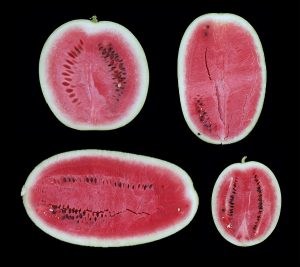 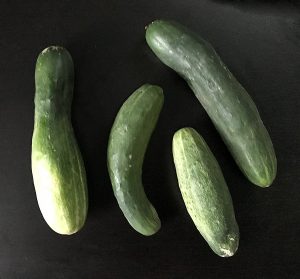 Watermelon and cucumber seed pods are controlled by the SUN and TRM family, respectively.

Amongst several genes that have been identified by scientists as those regulating fruit shape, the OVATE family is common across higher plants. In tomato, mutations in the founding member of this family, OVATE, lead to elongated fruits, resulting in oval, rectangular, or pear-shaped fruits. Tomato fruit shape is also controlled by the SUN gene, first identified by Dr van der Knaap and colleagues; mutations in this gene result in very elongated and tapered fruits. SUN is a member of a different gene family, common across various plants. SUN proteins belong to a family of proteins associated with microtubules. In other plants such as cucumber and rice, the shapes of vegetables and grains, respectively, are controlled by another family of genes called TRM. Dr van der Knaap and her team set out to investigate whether proteins encoded by these three gene families interact to regulate shape formation in tomato fruits, and whether this occurs in other species as well.

Shaping molecular conversation across species
In recent work, Dr van der Knaap’s team identified a new gene in the OVATE family in tomato, called SlOFP20. To demonstrate that it functions like an OVATE family gene, a yellow pear variety of tomato (that is pear-shaped because of a mutation in OVATE and SlOFP20) was transformed with increased amounts of SlOFP20, resulting in rounded fruits; conversely, reduced amounts of SlOFP20 in an ovate single mutant resulted in longer fruits. This confirmed the function of SlOFP20 as another OVATE family member controlling fruit shape.

A deeper understanding of the intricacies of shape determinants in crop development will lead to targeted breeding to enable customised produce for various purposes.

Proteins rarely function in isolation within a cell; rather, they interact with other proteins to relocate, or modify their function. To find proteins that interact with OVATE protein and thereby alter its function, the researchers used different biochemical experiments and microscopy, to discover a role for the TRM proteins in regulating fruit shape. TRM proteins have been known to regulate the assembly of microtubules in the cell that ultimately determine cell division and elongation. The authors found that OVATE, SlOFP20 and TRM proteins physically interacted to relocate between cytoplasm/ nucleus/cytoskeleton within the cell. Further experiments using the leaves of tobacco plants and expression of OVATE/SlOFP20/TRM led the authors to propose that relocalisation of this protein complex between different compartments may determine cell division patterning during flower development, thereby controlling ovary expansion and shape.

Given the inherent variations in fruit shape between ancient and modern varieties of tomatoes, the authors used ancestral populations of tomato to show that two OVATE family genes mutated following domestication, to form the modern day obovoid shaped tomato fruit. Interestingly, it is known that the SUN gene also works together with the OVATE gene to regulate this obovoid shape. Dr van der Knaap and her team were interested to find out if the same genes also controlled fruit and vegetable shape in plants in other families. Further investigations revealed that genes similar to OVATE and SlOFP20 are associated with fruit shape in melon and tubers of potato. In addition, certain TRM proteins had a similar function to OVATE proteins in cucumber and rice, also controlling shape. They proposed that the relative amounts of the OFP and TRM proteins, as well as their location in the cell, determine the outcome of organ shape. Whilst the TRM proteins promote elongation of fruits and vegetables, the OFP proteins promote more roundness of the same. Therefore, Dr van der Knaap and her colleagues have demonstrated a key role for the interaction between OVATE and TRM family of proteins in regulating the shape of crops from unrelated plant species. However, although it is known that SUN proteins regulate the shape of tomato, cucumber and watermelon fruits, the mechanisms of association between OVATE, TRM and SUN proteins to control organ shape in tomato is unclear. This is not the entire story about tomato fruit shape and shapes of other produce. Other studies have shown that members of the SUN family control shape of cucumber and watermelon in addition to tomato.

Produce in the future
Although key protein family members regulating plant morphology have been found to be conserved across different plant species, it is possible that there are still undiscovered proteins that also contribute towards the appearance of the fruit, grain or vegetable. Furthermore, the quality of the produce also depends on various environmental and endogenous factors such as temperature, water availability, pests, as well as hormones that fluctuate as a result of these stressors. How these different factors affect the size, shape, and quality of the fruit by regulating the OVATE, TRM, SUN and other families of proteins, will shape the future of agronomy. Given the role of climate change in the decline of agricultural yield, it will be interesting to see if changes in crop shape over time reflect tolerance to different environments. A deeper understanding of the intricacies of shape determinants in crop development will lead to targeted breeding to enable customised produce for various purposes, e.g. to reduce packaging. 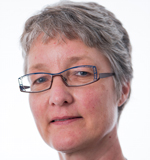 Esther van der Knaap completed her BS/MS in Plant Pathology at Wageningen University, the Netherlands in 1990, and her PhD in Genetics at Michigan State University in 1998. She completed postdoctoral training at Cornell University in 2001 and was Associate Professor at the Ohio State University until 2015. Since 2015, she has held the position of Professor in Horticulture at the Institute of Plant Breeding, Genetics and Genomics, University of Georgia. In 2014, she became an AAAS fellow and received a junior investigator award from the OARDC at the Ohio State University and received a young investigator award from the National Science Foundation.

Dr van der Knaap’s research is focused on the regulation of fruit shape and size of tomato and other Solanaceous crops.