Johrei is an important form of biofield therapy developed by Mokichi Okada in Japan in 1935. It is said to provide health benefits when a practitioner absorbs life-force energy from the universe and channels it toward the recipient. While it is practised in some countries such as Japan, the US, the UK, Brazil, and Thailand, the mechanisms are not well understood, and there is limited scientific evidence for its efficacy. Therefore, Kenji Yamamoto, Professor Emeritus at Kyushu University, has carried out a series of controlled experiments to determine whether Johrei power truly exists and, if so, whether it confers health benefits on the recipient.

Mokichi Okada developed the practice of Johrei, meaning ‘purification of the spirit’, in Japan in 1935. It is a type of biofield therapy, which means it is a non-invasive therapy during which the practitioner is said to work with the recipient’s energy fields to induce healing. Besides conferring mental and physical wellbeing, it is said to enhance or promote the recipient’s natural healing power.

Besides conferring mental and physical wellbeing, Johrei is said to promote the recipient’s natural healing power.

Despite its stated benefits to spiritual and physical wellbeing, Johrei is not widely practised outside of some limited countries. This may be due to a lack of scientific evidence for its efficacy as a health and wellbeing therapy, and because the ways it works are not yet understood. Therefore, using a scientific approach, Dr Kenji Yamamoto explored how Johrei power confers health benefits on its recipients. Considering the results of both in vitro and in vivo experiments, he sought to establish whether Johrei power truly exists and, if it exists, whether it provides health benefits to its recipients.

In vitro experiments
During in vitro studies, it is possible to tightly control experimental conditions to minimise the impact of psychological influences and other forms of bias. Therefore, Yamamoto first explored the effect of Johrei therapy on cultured human cancer cell lines. He found that Johrei reduced cell viability (survival chances) while increasing cell death rate in cultured human gastric cancer cell lines. The therapy had a similar effect on other types of human cancer cells. However, Yamamoto found that he needed to find the balance between each particular cancer cell type’s ability to grow and multiply and the specific level of Johrei power required.

The in vitro studies on Johrei also show that the power of the therapy is not simply in attacking diseased cells – cancer, in this instance – but also in its health-promoting effect on the normal cells of the body. In an experiment on normal human umbilical vein endothelial cells (HUVEC), Johrei increased the viability and decreased the death rate of the cells. Additionally, in a lab experiment examining wound healing, normal human skin microvascular endothelial cells treated with Johrei migrated faster into a scratch and repaired the scratch more efficiently than the cells that were not treated with Johrei.

In vivo experiments
Previous human studies of Johrei have suggested an association between the therapy and enhancement of the innate immune system and beneficial effects on mood following stress. However, as Yamamoto suggests, the results of these experiments may have been subject to bias in the form of psychological and other influences arising from the relationship between the Johrei practitioner and the recipient.

He therefore carried out a single-blind, randomised, placebo-controlled trial with both 199 qualified Johrei practitioners and 144 unqualified volunteers performing Johrei. The volunteer therapy recipients included 186 people in good general health and 39 with a tendency towards hypothermia (defined as a body temperature below 36ºC for the purposes of this experiment). To evaluate the effect of Johrei treatment in comparison with placebo, Yamamoto measured changes in blood flow and body temperature, which are established indicators of general health.

To maintain normal cellular function, core body temperature must be maintained at around 37ºC. Rising too far above or falling too far below this temperature can potentially be life-threatening. This is why it is important for healthcare practitioners to determine the patient’s body temperature during medical examination.

Moreover, raising core body temperature can benefit health in a range of ways. These include strengthening the immune system, reducing the risk for neurodegenerative disease (such as Alzheimer’s disease, Parkinson’s disease, Huntington’s disease, and motor neuron disease), slowing damage to blood vessels in people with diabetes, supporting growth of bone and cartilage, and enhancing the response to cervical cancer treatment.

Experimental methods
During Yamamoto’s experiments, each volunteer recipient sat on a chair, barefoot, in a temperature–controlled room, set to 23 ± 1°C and 52 ± 1% humidity. They wore a set of headphones playing light, relaxing music to block out any influence from outside noise during the ten-minute Johrei treatment. The practitioner then entered the room through a different door and sat 50 to 100cm behind the recipient, so that they could not see who was performing the treatment – again, to minimise the risk of bias. The recipient received the treatment from a qualified practitioner or an unqualified volunteer once daily for two consecutive days, at the same time of day or as close as possible.

Only Johrei from a qualified practitioner increases the recipient’s blood flow and surface body temperature.

Yamamoto compared the effects on the recipient by observing changes in blood flow and surface body temperature before and during the ten-minute treatment. To measure blood flow volume and surface body temperature, Yamamoto used laser speckle flowgraphy (LSFG) and infrared thermography (IRT). He placed the respective devices 30cm from the right side and 55 to 60cm from the left side of the Johrei recipient’s neck.

IRT is also a highly sensitive measurement technique. It can be used to record the emission of infrared radiation from the surface of the skin. The resulting thermographic images show skin–surface temperature distribution of the recipient’s neck. Yamamoto then used the IRT-associated software to analyse the images and calculate the average skin temperature.

Additionally, in a third experiment, participants with a tendency towards hypothermia experienced increased blood flow and elevated both surface and axillary body temperature (indexes of peripheral and core body temperature, respectively) only when Johrei was administered by a qualified practitioner.

Yamamoto’s in vivo human study provides groundbreaking evidence in support of using Johrei therapy – but only when delivered by a qualified practitioner – to improve blood flow and raise body temperature in both generally healthy recipients and those with a tendency towards hypothermia. He concludes that Johrei therapy may support the maintenance of homeostasis (equilibrium in the body) due to its natural healing power.

Where will your research take you next? Do you plan to investigate the mechanisms of action for the health-promoting properties of Johrei? If so, how do you plan to go about it?
Despite extending knowledge beyond the limits of in vivo studies, conclusive evidence of the benefits of Johrei is still lacking because of difficulties of eliminating psychological and other influences. Therefore, further human studies are necessary to establish the health benefits of receiving Johrei for people either generally healthy or with pathological conditions. For this, similar studies will be conducted for subjects with various pathological conditions associated with sub-optimal blood circulation and body temperature, such as diabetes, cancer, and hypertension. Through these studies, the action mechanisms of Johrei that enhances or promotes the natural healing power will be elucidated. 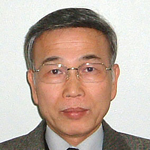 Professor Kenji Yamamoto researches the health benefits and the healing powers of the biofield therapy Johrei.