Biology
Harmful algal blooms can be extremely destructive for local marine life. The acceleration of geographic expansion and intensity of these blooms on a global scale associated with climate change have recently been reported. September 2019, the first report published from the United Nations’ Intergovernmental Panel (IPCC) linked climate change to harmful algal blooms. Existing methods to control them are often inadequate and may damage the environment. Dr Nobuharu Inaba, Civil Engineering Research Institute for Cold Region in Japan, is working on a novel biological approach. Using bacteria with the ability to eliminate these harmful algae, his new method shows promising results.

Algal blooms pose severe environmental threats in some areas of the world. Blooms are characterised by an excessive and uncontrolled proliferation of harmful algae, which can affect marine wildlife, as well as contaminate food resources, such as cultured fish and bivalves. These blooms occur when excessive amounts of nutrients are released into the water, creating the perfect conditions for plankton to proliferate and form dense blooms. In extreme situations, it may even have fatal consequences for humans, marine mammals and other aquatic life due to exposure to toxic products. 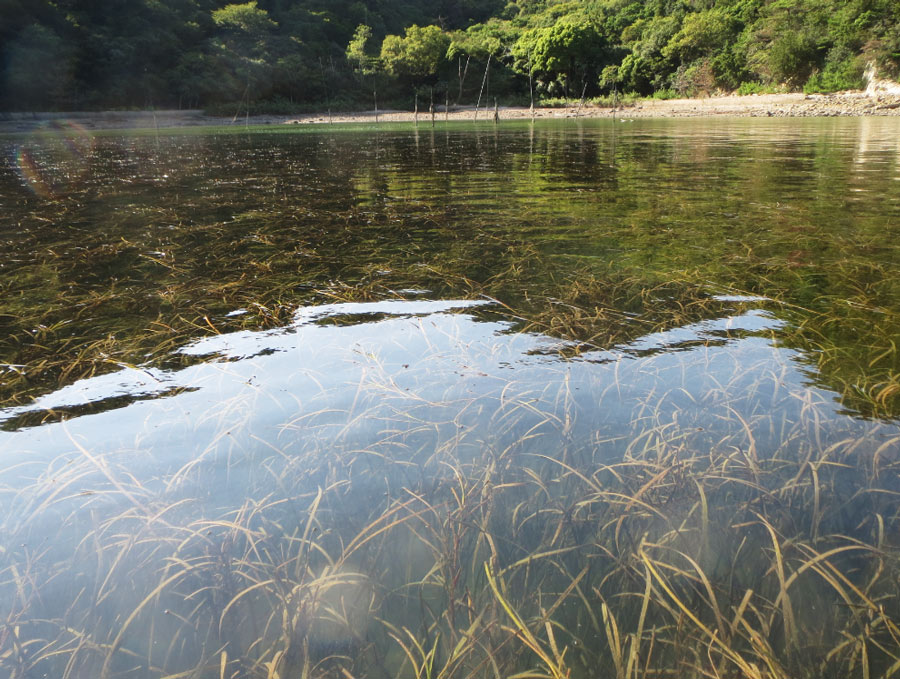 To avoid these issues, an effective and eco-friendly strategy to treat these algal blooms is imperative. In Japan, for example, various methods have been attempted, including policy changes to control sewage and waste discharge and ways to reduce the amount of nutrients from fish farms released into the water. However, there is growing concern that these options may not be enough or may sometimes lead to negative consequences to the environment.

Keen to develop a way to limit these algal blooms, Dr Nobuharu Inaba and his team based at the Civil Engineering Institute for Cold Region in Japan, wanted to explore a new biological approach. In essence, a natural way to control algal blooms that do not involve harsh chemicals or complex separation processes.

Our research has demonstrated that bacteria which inhibit the growth of species of harmful algae are commonly distributed at seagrass beds and are likely to be a worldwide phenomenon.

A new biological approach
Surprisingly, when considering this problem can have major repercussions, a possible solution came in the form of tiny bacteria. Over the past few years, researchers have identified marine bacteria that are densely populated in seagrass beds which can suppress the proliferation of harmful algae. By controlling excessive algal growth, Dr Inaba likens the function of these bacteria to the ocean’s immune system. He explains: “We have been seeking a potential biological control of algal blooms using natural-living microorganisms associated with seagrass beds. We propose novel strategies to mitigate the occurrence of algal blooms by restoration, protection, or the introduction of seagrass beds.”

This approach is certainly not a new idea. Biological control has been used in agriculture for decades to protect crops or for clean-up operations in severely polluted areas. However, water is not the same as land, and differences between these two environments must be assessed before starting to use bacteria in open water sources.

Worldwide phenomenon
Seagrass beds seem to be the centre of activity for these helpful bacteria. These underwater plants occupy vast extensions in sheltered and relatively shallow coastal zones and prefer muddy or sandy bottoms. They can protect and feed hundreds of different aquatic species, from fish and molluscs to worms and nematodes.

However, in-depth studies to characterise the link between bacteria and seagrass beds are still scarce. As a first step, Dr Inaba wanted to assess distribution and changes throughout the year of these algicidal and growth-inhibiting bacteria. He targetted a specific alga common in blooms: Chattonella antiqua, the notorious fish-killing raphidophycean flagellate.

The genus of Chattonella, a unicellular algae, has been spotted in southeast Asia, USA, Brazil, Australia and even in the North Sea in Europe. The exact mechanism that leads to fish death is not yet fully understood, but it’s likely to involve neurotoxins and/or haemolytic substances. Also, in a rather crude way, these algal blooms can suffocate the fish by blocking the gills.

Dr Inaba opted to test two locations: southern Ariake Sea in Japan and Puget Sound in Washington, USA. In both places, the researchers found high amounts of harmful algal growth-limiting bacteria in seagrass beds. “Our research has demonstrated that bacteria which inhibit the growth of species of harmful algae are commonly distributed at seagrass beds and are likely to be a worldwide phenomenon”.

What’s more, the abundance of these algal growth-limiting bacteria followed seagrass levels: high in June and July, followed by a sharp decrease in September when seagrass withered. The researchers speculated that the presence of seagrass stimulates the proliferation of these bacteria. While growing, seagrasses provide large amounts of suitable organic matter which can be an accessible food resource for the bacteria.

Worryingly, this also means that in the absence of seagrass, these bacteria find it difficult to grow and prosper, thus removing any control of harmful algae. For example, the researchers found high levels of toxic algal cysts in Westcott Bay, where seagrass disappeared back in 2002. The germination of those cysts could function as a “Seed Population” to initiate harmful algal blooms in the area.

Is it possible to control algal blooms with bacteria?
The fact that seagrass can provide protection and food for these bacteria suggests a potential mechanism to limit the proliferation of harmful algae. It’s not unreasonable to speculate that developing ways to restore and protect seagrass beds has the potential to indirectly control harmful algal blooms.

With this in mind, Dr Inaba’s goal was to examine how these bacteria present in seagrass beds react to an artificial algal bloom. “To our knowledge, this is the first study in which growth-limiting bacteria, routinely detected in seawater, have been used to mitigate an artificially-induced Chattonella bloom.”

Results soon confirmed that bacterial communities in seagrass could limit artificial Chattonella blooms. The levels of Chattonella peaked on the second day but were virtually eliminated by the end of the experiment after eight days, due to a gradual increase in growth-limiting bacteria in the untreated seawater experiment. Even with the presence of natural predators, such as nanoflagellates, these helpful bacteria continued to force the number of Chattonella cells to drop. For Dr Inaba, this is conclusive evidence that these bacteria can “suppress the artificial blooms of the fish-killing raphidophyte flagellate Chattonella-antiqua, even in the presence of bacterial competitors and predators.”

These findings may be the starting point for an eco-friendly and effective way to control algal blooms by preserving the microbial assemblages as an integral part of restored seagrass meadows.

The researchers also spotted a reduction in water turbidity when these bacteria were present. This decrease was not surprising, as seagrass beds are vital for purifying water and clear water means less harmful algae. Ultimately, lower turbidity facilitates light penetration in the seagrass bed and allows for better oxygenation. For Dr Inaba, these bacteria not only control algal blooms but also “help to maintain the health and ecosystem diversity within coastal seagrass beds”. 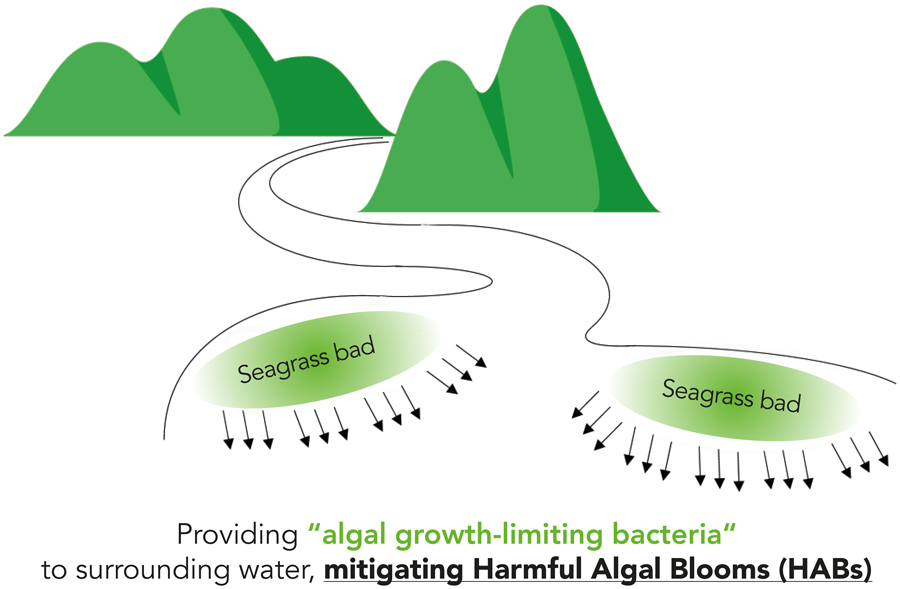 Despite the progress in this field, the mechanism of action for these algal-killing bacteria is not yet entirely understood. However, Dr Inaba explains some genetic clues: analysis shows that considerable numbers of bacteria that suppress algal growth have the necessary enzymes to metabolise some forms of cellulose. It’s possible that substances released by these bacteria, such as glycoside hydrolases (which can degrade complex polysaccharides), may inhibit Chattonellagrowth.

Restore and protect seagrass beds
It’s still early days, but these findings may be the starting point for an eco-friendly and effective way to control algal blooms. This work also emphasises the importance of restoring and protecting seagrass beds in coastal ecosystems, in particular in regions frequently affected by algal blooms or in locations used in seafood production for humans.

Sadly, over the past few decades, human activities such as coastal reclamation, nutrient pollution and poorly controlled aquaculture have caused levels of seagrass to drop dramatically. Since the initial estimate made back in 1879, the world has lost almost one-third of its seagrass populations. 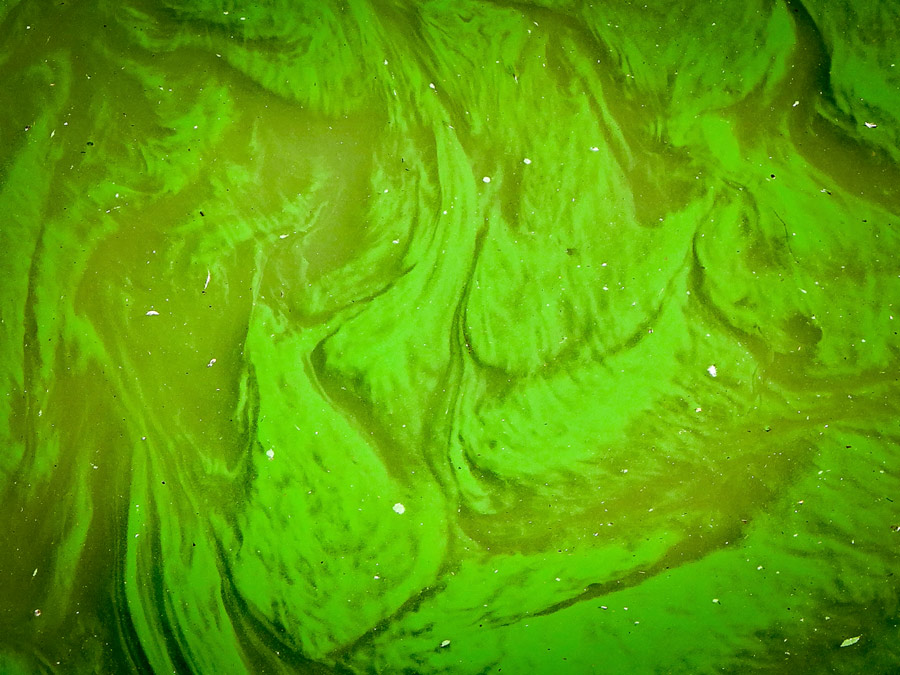 “This means we have lost a vast amount of critical habitats for numerous marine and estuary organisms, providing spawning, shelters and feeding grounds”, said Dr Inaba. “They are a crucial part of coastal environments, purifying the water quality by removing the nutrients and particle matters, and stabilising the seafloor by increasing sediment cohesion”.

It’s urgent not only to develop effective ways to treat algal blooms once they occur but also to establish healthy coastal ecosystems where sufficient levels of algal growth-limiting bacteria can keep harmful bacteria under control. As a bonus, long-term costs associated with restoring seagrass are low, as healthy beds can operate for an extended period with minimum management.

Could this approach be used to suppress large algal blooms, possibly by adding algal growth-limiting bacteria?

<> I believe that introducing potentially invasive bacteria requires a very careful manner, assessing all the possible adverse effects in stages. Our approach aims to enhance the resistance of coastal areas against harmful algal blooms by protection and restoration of seagrass beds and their microbial assemblages.

We hold the future in our hands, choosing to recover the ecosystem services from seagrass beds we have lost. 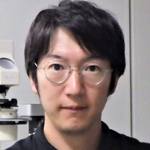