Biology
Professor Teresa Pawlowska and her team from the School of Integrative Plant Science at Cornell University have performed an in-depth study on the evolutionary genomics of the recently discovered mycoplasma-related endobacteria (MRE). They are currently in the process of investigating the complex interrelationship between these endobacteria, arbuscular mycorrhizal fungi (AMF) and their host – terrestrial plants. This is one of the oldest examples of symbiosis on our planet and a full understanding is essential for us to support both natural and agricultural global ecosystems.

Every living organism is connected in the web of life. Complex and dynamic interactions can span across different species, families, kingdoms, and domains of life. This inspired Professor Pawlowska, and her team, to study one of the most common relationships seen in nature – the connection between terrestrial plants and mycorrhizal fungi. This is known as a symbiotic relationship, in which an association exists between two (or more) organisms. Interactions can range from antagonistic to beneficial for one or both the species involved. Symbiotic relationships are unique and are essential in maintaining a delicate balance in ecosystems all over the world.

Arbuscular mycorrhizal fungi (AMF) and plants
Incredibly, the majority of all studied plant families have a beneficial association with their mycorrhizal fungi and are sometimes completely dependent on the fungus. 80% of vascular plant families, including crops, have a mutualistic symbiotic relationship (thought to have originated around 400-460 million years ago) with Arbuscular Mycorrhizal Fungi (AMF), part of the Glomeromycotina group. This important partner acts as a natural biofertiliser, harvesting from the soil essential nutrients, such as phosphorus and nitrogen, and translocating them to plant hosts. AMF colonise plant roots, using specialised structures known as arbuscules to penetrate root cortical cells. This physical connection allows the passage of nutrients from the AMF to the plant. In return, the AMF receive approximately 20% of the plant’s photosynthetic carbon.

Remarkably, research has shown that AMF have an additional symbiotic relationship with mycoplasma-related endobacteria (part of the Mollicutes class of bacteria), which reside in the cytoplasm of AMF cells. Our knowledge regarding the biology and life-cycle of MRE is relatively limited. To address this lack of understanding, Professor Pawlowska and her team have conducted a series of in-depth studies, focusing on the evolution and genetic make-up of these endobacteria. As it has been suggested that AMF could be an effective alternative to potent chemical fertilisers, understanding the effects of MRE on AMF function, and the subsequent consequences for the host plant, is of vital importance.

This project, sponsored by the National Science Foundation and the National Institute of Food and Agriculture, was highly collaborative, involving scientists from Cornell University, West Virginia University, and the University of Turin, and offered training opportunities for undergraduate, graduate and postdoctoral students. Mentoring throughout the study inspired and engaged students and provided them with research experience in the fields of microbiology, molecular genetics, and bioinformatics.

Endosymbionts depend on fungal hosts
Professor Pawlowska conducted a metagenomic study by analysing different populations of MRE, associated with three different AMF species. Metagenomics is the study of genetic material, obtained from environmental samples. This allows researchers to examine the complex genetic composition and diversity within natural populations and communities.

Results indicated that MRE genomes are greatly reduced – their genomic capacities being minimal and limited to the most basic cellular functions. This is a consequence of living in the cytoplasm of host AMF cells. The intracellular environment is relatively safe and rich in metabolites such as amino and nucleic acids. As a result, endobacterial genes that also encode these products, essentially become unnecessary and MRE become completely reliant on AMF.

Vertical transmission
Some endosymbionts, including MRE, are vertically transmitted between host generations. This means that when AMF asexually reproduces (the offspring contains the exact same genes as the parent and are effectively clones) only some of the endobacteria are inherited by the next generation. A reduction in endobacteria population size could therefore limit genetic diversity, meaning that deleterious mutations can become more frequent in the population, potentially leading to extinction.

However, Professor Pawlowska and her team showed that within each of the three studied MRE populations, genetic diversity was unusually high, enabling the different populations to adapt to specific host conditions. Typically, mutualistic or beneficial bacteria are characterised by genetic similarity, whereas parasitic bacteria have a greater level of diversity, enabling them to adapt to potential host resistance. Therefore, these results suggest that MRE could be parasitic. 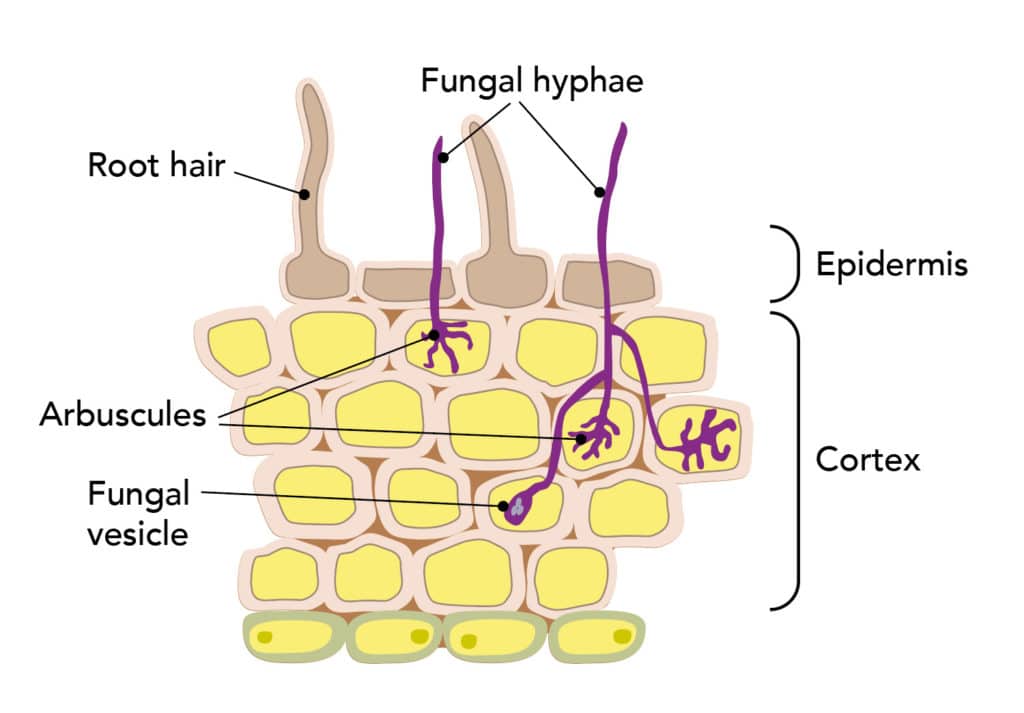 Why are MRE so genetically diverse?
Rapid accumulation of both beneficial and deleterious mutations is common in heritable endosymbionts (including MRE). This is due to the loss of the ‘proofreading’ ability of DNA polymerase to use its exonuclease activity to remove erroneously introduced bases and to replace them with the correct ones. However, the team showed that MRE uses recombination to overcome the risk of degenerative evolution and restore high fitness MRE genotypes. In fact, recombination rates are higher than mutation rates, which makes MRE one of the fastest evolving bacteria on the planet. Recombination is the process of rearranging genetic material, by exchanging genes between different organisms. Not only can this ‘repair’ gene copies carrying harmful mutations, but it also enhances genetic diversity.

Results also indicated that 5% of the MRE genome comprises mobile genetic elements (MGE). These are DNA sequences, encoding enzymes that enable the movement of DNA within and between genomes. Ultimately MGEs can introduce novel genes, or disrupt existing ones. The movement of MGE and amplification of sequences on a single chromosome, increases the number of available recombination sites, thereby further promoting genetic diversity.

Furthermore, the team showed that a significant part of the MRE genome encodes proteins mainly used for interacting with AMF – for example, the SUMO protease, which controls postranslation modifications of host proteins. This provides evidence for horizontal gene transfer; whereby genetic material is exchanged between organisms of different species or populations. In fact, genes that originate from AMF represent 3-5% of the total coding DNA sequences in the three different MRE populations.

A new species?
Overall, the research conducted by Professor Pawlowska and her colleagues has shown that MRE are truly unique in terms of their high level of genetic diversity, as a result from genetic recombination and horizontal gene transfer, which increases this endosymbiont’s adaptive ability. In fact, to acknowledge their distinctive biology, the team have developed a taxonomic proposal to accommodate MRE in the new species ‘Candidatus Moeniiplasma glomeromycotorum’.

The team also discovered that within a single AMF host, CaMg can coexist with another endobacterium, ‘Candidatus Glomeribacter gigasporarum’ (CaGg). This was the first study to highlight the co-existence of two endosymbionts within a single fungal host. CaGg is entirely nutritionally dependant on the fungal host, and in return, primes host energy metabolism. Unlike MRE, CaGg populations have a much lower level of genetic diversity, which suggests that these two endosymbionts may have distinctly different lifestyles. Interestingly, in all samples, MRE was much more abundant than CaGg, further supporting differences between their biologies. Furthermore, results indicated both endosymbionts retain their genetic and lifestyle characteristics, regardless of whether they are present in the fungal host alone or together.

However, much more research is still needed to fully understand the complex relationship between MRE, AMF and the host plant. Are MRE a friend or foe of their fungal host? And, if the effects are antagonistic, how will this impact the life of the plant?

Understanding this complex relationship is vital for the future of agriculture. Soil tilling disrupts delicate mycorrhizal networks, necessitating the increased use of chemical fertilisers such as phosphates. However, researchers predict that the world’s phosphate supply will be exhausted within the next 100 years. AMF, as a natural biofertiliser, could be the answer. However, we will need to greatly increase the prevalence of sustainable farming practises before this becomes a viable option.

Why are arbuscular mycorrhizal fungi (AMF) so important for plant health?
<>Dependence on AMF for soil mineral nutrients appears to be an ancestral feature of terrestrial plants. Some plants, such as brassicas, have evolved to be independent of AMF but most other plants relay on AMF for mineral nutrition. Mineral nutrient deficiencies are debilitating to plant growth and development. Plants deficient in phosphorus, the key element translocated by AMF, experience stunting.

How did endobacteria, such as mycoplasma-related endobacteria (MRE) evolve to become so dependent on their fungal host?
<>Our data suggest that MRE, or better CaMg, is a product of an ancestral host switch from animals to fungi. Present-day animal-infecting mycoplasmas are entirely dependent on host metabolites. Availability of costly metabolites from the host reduces selective pressures on genes responsible for their biosynthesis. These genes accumulate deleterious mutations and, in bacteria, they are eliminated from the genome, leading to permanent dependency on the host.

In what ways are MRE different from other endobacteria?
<>CaMg is vertically transmitted and yet it retains mechanisms that generate genetic diversity in its populations, such as recombination and MGE. These mechanisms are lost in other heritable endobacteria.

Why is it important to study the relationship between AMF, MRE and plants?
<>Once rock phosphate deposits, which are the source of phosphate fertilisers, are exhausted, AMF with their ability to translocate phosphorus from the soil into plant roots will become critical to food production.

It has been suggested that MRE could be a parasite of AMF. How could this impact both the fungi and the plant hosts?
<>As a parasite, CaMg would inflict a metabolic cost on AMF, which themselves are obligately dependent on plants for energy. Consequently, mycorrhizal symbioses involving CaMg would become costlier to plants. 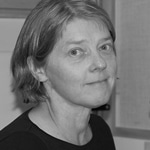 Prof Pawlowska is a fungal biologist with interests in the evolution of symbioses between fungi and bacteria. She received her PhD from the University of Minnesota and is an Associate Professor in the Section of Plant Pathology & Plant-Microbe Biology in the School of Integrative Plant Science at Cornell University.

2 thoughts on “Crossing kingdoms between plants, fungi and bacteria”