Health & Medicine
Treating bacterial infections can be challenging, even more so when they build a fort. These forts, or ‘biofilms’, form on living and non-living surfaces, such as heart valves, and protect bacteria from immune responses and antibiotics. This can lead to serious, chronic conditions, for instance an infection of the heart’s lining (endocarditis), relapsing infections and increased mortality. To help combat this, Jena University Hospital researcher Lara Thieme has been exploring best practices in anti-biofilm research and the effectiveness of antibiotics against enterococcal biofilms.

Bacteria are formidable organisms. These “simple” cells have managed to colonise almost every surface on earth, invade animals’ bodies (including humans), evade complex immune responses and develop several mechanisms for antibiotic resistance. One way they do this is through the creation of biofilms – a kind of slimy fort that protects embedded bacterial communities from external stressors.

While their resilience is something that could be admired, it can also make bacterial infections difficult to treat. In fact, biofilm formation in animals and people can cause theoretically “adequate” antibiotic therapies to fail, resulting in relapsing infections and increased mortality. This is often seen with enterococci, which frequently cause biofilm-associated infections such as infective endocarditis. The enterococci use host platelets and fibrin to build biofilms in the host’s heart, causing a potentially deadly inflammation of the heart valves and endocardium.

Yet even with up to 65–80% of all human infections being associated with biofilm formation, most research into infectious disease has focused on planktonic bacteria associated with acute infections. Additionally, those researching clinical biofilms still lack adequate, standardised methods for assessing anti-biofilm treatments – leading to confusion in the research community and potentially affecting patient outcomes.

The trouble with biofilms
Biofilm development is considered one of the biggest drivers of persistent infections. Not only do they shield bacteria from hostile elements such as host immune systems, but they also release bacteria, allowing them to disseminate and colonise new surfaces – effectively expanding their numbers and territory.

…biofilm-formation in animals and people can cause theoretically “adequate” antibiotic therapies to fail, resulting in relapsing infections and increased mortality.

Additionally, these slimy fortresses have been shown to withstand up to 100, in some cases even up to 1000 times higher concentrations of antibiotics than ‘free-floating’ cells. Researchers believe this could be due to biofilms’ structure preventing antibiotics from reaching the bacteria as well as the distribution of bacteria with different metabolic activity throughout the biofilm, with some antibiotics only able to affect the outer layers of the biofilm where oxygen is present and the bacteria are faster-growing. And biofilms have been known to harbour antibiotic-resistant bacteria.

Therefore, understanding clinical biofilms and finding ways to combat them is critical. However, studying these growths in a way that is therapeutically useful can be challenging. While researchers have implemented several methods for studying biofilms’ antimicrobial susceptibility in vitro, none have managed to adequately mimic in vivo biofilms, which have different morphologies, cell numbers and biomass depending on the site of formation. The biofilms that form in the heart are different to those that form in the gut. This prevents researchers from recommending suitable antibiotics for clinical situations.

Moreover, researchers are yet to agree on the best way to measure biofilms’ antimicrobial susceptibility. While minimal biofilm eradication concentration (MBEC), minimal biofilm inhibitory concentration (MBIC), biofilm bactericidal concentration (BBC) and the biofilm prevention concentration (BPC) have been suggested as guides for treating biofilm-associated infections, their definitions and interpretations have varied across publications, and agencies such as The European Committee on Antimicrobial Susceptibility Testing (EUCAST) and the Clinical and Laboratory Standards Institute (CLSI) haven’t provided standardised definitions. These inconsistencies impact the accuracy and clarity of results and could lead to poorer patient outcomes if applied clinically.

The solution
According to Thieme, standardised biofilm-susceptibility parameters with precise definitions are key to improving accuracy and reducing confusion and contradictions in anti-biofilm research. In each case, control and test biofilms should be measured at time points before and after antimicrobial treatment – either by determining the number of viable bacterial cells, imaging or staining and light photometry. Thieme also suggests that measuring biofilm eradicative effects, rather than inhibitory, could help improve the correlation between biofilm-susceptibility tests and patient outcomes.

What’s more, in vivo biofilm modelling could be improved using insect models, such as the greater wax moth (Galleria mellonella) larvae, which can be obtained easily and inexpensively and don’t face the ethical constraints afforded by mammals. They allow for simple and rapid evaluation of biofilm susceptibility due to a melanisation response to the bacterial biofilm, turning the larvae black if the tested antibiotic is not efficient in eradicating the biofilm. Further, the larvae can survive at 37°C and have an innate immune system that closely mirrors those in vertebrates. Better still, the model could help reduce the number of mammalian trials by confirming whether antibiotics that performed well in vitro can also perform in vivo. G. mellonella has already been used to study antimicrobial susceptibility in a variety of bacteria, including Enterococcus faecalis, Staphylococcus aureus and Escherichia coli.

Putting it into practice
Despite all of the above, biofilms’ antibiotic susceptibility still needs to be tested in vitro before treatments can progress to insect or animal models, let alone be applied therapeutically. For E. faecalis-driven endocarditis, combinations of the antibiotics ampicillin and gentamicin, ceftriaxone or ceftaroline have been suggested as potential treatments. Clinically, synergistic interactions of antibiotic combinations are desired to enhance the bactericidal effects of individual antibiotics, allowing the use of lower doses of each agent.

While ampicillin and gentamicin are used most often, the therapy can cause kidney toxicity and damage to the inner ear or the nerve between the inner ear and the brain. In contrast, ampicillin and ceftriaxone have been shown to be effective against E. faecalis and well-tolerated by patients – instead of working on its own, ceftriaxone enhances ampicillin’s ability to fight the bacteria. Ceftriaxone’s relative, ceftaroline, however, has shown greater in vitro activity against enterococci and has been approved for use in S. aureus-related skin infections and community-acquired pneumonia. It’s also been demonstrated to work against staphylococcal biofilms in vitro.

As a result, Thieme and her collaborators decided to test the effectiveness of all three combinations (and their individual constituents) in eradicating and preventing planktonic E. faecalis and its biofilms. After surveying twenty clinical E. faecalis isolates, including three from patients with endocarditis, and a laboratory standard strain, the researchers found ceftaroline and ampicillin to be better at depleting planktonic isolates than ampicillin and gentamicin. This pair of antibiotics also showed similar activity to ceftriaxone and ampicillin. However, none of the antibiotic combinations was able to eradicate biofilms, highlighting the recalcitrance of biofilms.

Importantly, some isolates developed ceftriaxone and ceftaroline resistance when exposed to high concentrations of the antibiotics. The results led Thieme and her collaborators to question the use of the three antibiotic combinations in treating enterococcal biofilms, with four to six-week treatments putting patients at risk of developing Clostridium difficile colitis, toxicity and antibiotic-resistant strains.

To see if the antibiotics behaved the same in vivo, Thieme recently extended the research using G. mellonella. She expects to publish her latest study later this year.

Yet to be beaten
Biofilms have been key to bacteria’s world domination – protecting them from hostile environments, immune systems and even antibiotics. As admirable as this may be, their resilience becomes problematic when it comes to treating infections and can result in secondary issues such as endocarditis, relapsing infections and increased mortality. Adopting standardised anti-biofilm study methods, along with improved in vivo biofilm models, could help researchers prevent, inhibit or eradicate the slimy fortresses and drive better patient outcomes.

<>Currently, I am writing my PhD thesis, which takes up most of my time. I am in the final edits of my next publication in which we analysed how the antibiotic combinations used for treatment of IE behave in enterococcal infections in G. mellonella larvae. Me and my master student are also working on establishing a biofilm implant model in the larvae to have an in vivo model on hand for anti-biofilm susceptibility testing. Besides that, I have been working on a project investigating how antibiotic-loaded nanoparticles may overcome the biofilm barrier in Burkholderia and Pseudomonas infections involved in cystic fibrosis. I am also planning a project in the field of microbiome analysis, investigating the bidirectional relationship between the gut and reproductive tract microbiome and endometriosis, a gynaecological, chronic inflammatory disease. 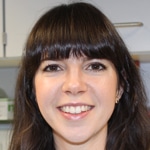 Lara Thieme completed her Bachelor of Science in “Molecular Life Science” at University of Luebeck, Germany, in 2013, followed by a Master of Science in “Infection Biology”, again at Luebeck, in 2016. Since 2016, she has been working on her doctoral studies (PhD) at the Institute of Infectious Diseases and Infection Control, Jena University Hospital, Germany.

One thought on “Breaking down the fort: Combatting clinical biofilms”