Behavioural Sciences
Since his retirement in 2003, Dr Marshall Jones, a professor at Penn State’s College of Medicine, has focused his research efforts on trying to explain how the home advantage in team sports works. The home advantage is the tendency for the home team to win more often than it loses. In the National Hockey League (NHL) the home advantage had been large for 40 years. Then from 1991 to the end of the century it fell by half and has remained that way ever since. What happened and how did it work?

In the beginning (1917) the NHL was a Canadian league. In the 45 years following the end of the Second World War, the league expanded from six to 22 teams, mostly in the United States. As it did, fighting quadrupled. From its foundation the NHL had relied on a “players’ code” to police the sport. Under this code a player was allowed to “punish” with his fists what he saw as infractions of the rules or “disrespect”, especially to a star player; and the “offending” player usually fought back. The punishment did not have to be delivered by the player who had been fouled or disrespected: any player on his team could inflict it. After the war, more and more teams made use of “enforcers”, big men who were not necessarily good at hockey but were good at fighting.

As the league expanded, the nationality of its players also changed. As late as 1960 almost all the players (96%) were Canadian. By 1991 a quarter were either US born or European. Of the 22 teams in 1991, 16 were American and six Canadian. Only two of the “big market” teams, Montreal and Toronto, were Canadian. All the rest – Detroit, Chicago, St. Louis, Los Angeles, Boston, Buffalo, New York (two), Washington, Pittsburgh, and Philadelphia – were American.

In less than half a century, the NHL fan base and with it its financial base had been largely Americanised. In addition, for all its prestige the NHL was becoming increasingly provincial with its quasi-legal players’ code. Fighting was penalised by ejection from the game in international hockey, college hockey, and in professional hockey everywhere except in North America. The conflict between traditionalists and modernisers was intense and becoming more so. Everyone knew that something had to be done.

Dr Jones argues that the focus of the visiting players on their opponents (due to attentional narrowing) impairs their teamwork.

The crisis came in 1992-93 when the NHL board passed the instigator rule. The rule specified that a player who started a fight should be ejected. When implemented, the rule was infrequently imposed because officials couldn’t be sure who had started the fight. Nevertheless, the message got through that the board wanted less fighting, and the frequency of fighting went into a long decline.

Instant video replay
In the 1991-92 season, a year before the instigator rule was introduced, another rule-change was made in the NHL. Prior to 1991-92 goal-mouth decisions were made by the on-site officials, who might have been influenced or even intimidated by the strongly partisan hometown crowd. With the implementation of Instant Video Replay (IVR) such decisions were made remotely at NHL headquarters in Toronto. With their removal to Toronto any bias that may have existed previously was eliminated. Since that bias favoured the home team, an obvious hypothesis was that the subsequent drop in home advantage was due to the introduction of IVR.

The American Hockey League (AHL) is the primary development league for the NHL and the most prestigious hockey league in North America after the NHL. It currently comprises 30 teams, 27 in the US and three in Canada, all of which have an affiliation agreement with one or another NHL team. On opening day of the 2014-15 season there were 637 AHL alumni on NHL rosters, together constituting 83% of the NHL player pool. The East Coast Hockey League (ECHL) is the next most prestigious hockey league in North America and also closely related to the NHL.

Both these leagues experienced a drop in home advantage every bit as large as that in the NHL and in the same years. However, the AHL did not introduce IVR until 2012 and the ECHL had not yet introduced it by 2015. These facts contradict the idea that the introduction of IVR caused the fall in home advantage in the NHL in the decade following 1991-92.

The teamwork theory proposes that
the home advantage is better understood as an
‘away disadvantage’.

The teamwork theory
The home advantage is a class of events that takes place in a sports venue (stadium, ballpark, arena, gymnasium, any place where a sport may be played). The actors in these situations are the two teams and their constituent players, the officials, and the audience. Any theory of the home advantage must explain how one or more of these actors transforms, consciously or unconsciously, whatever he or she receives from the outlying causes into an advantage for the home team. To date this crucial phase in how the home advantage works, its mechanism if you like, has received little attention.

By far the most common supposition is that the home players receive the support of the hometown crowd while the visiting players suffer its hostility and together they transform these inputs into the home advantage. Just how this transformation is brought off is not detailed. It does not explain, for example, how it happens that when the players in a team sport act as individuals (as they do in free throws in basketball, penalty kicks in soccer, and shootouts in ice hockey) there is no home advantage at all.

Another theory has it that the players do not mediate the home advantage. Yes, the hometown crowd has an effect, but not on the players. It affects the officials. Consciously or unconsciously, they feel and fear the passion of the hometown crowd and accommodate it. If ever there was a situation made for a theory to look good, it was the introduction in 1991-92 of Instant Video Replay in the NHL. It was followed after a year’s delay by a precipitous and sustained reduction-by-half of the home advantage. Unfortunately, as we have seen, the two most closely related leagues also underwent a fall in home advantage in those same years. If any part of the pre-IVR home advantage was mediated by the on-site officials, then the fall in the AHL and ECHL should have been less than it was in the NHL – but it wasn’t.

The teamwork theory advanced by Dr Jones is a third possible mechanism. Under this theory the home advantage is mediated not by the officials and not by the players acting as individuals but by defective teamwork in their play as a team. It begins by pointing out a relevant finding from stress research, namely, that when people are under threat their attention narrows and focuses on what they perceive as the threat. The finding called “attentional narrowing” was well-established as early as 1960. In the case of team sports, the threat is defeat and possible humiliation. It is posed by the hometown crowd and delivered by the home players. Attentional narrowing then has consequences of its own. It is difficult to play offensively when you feel on the defensive, and even more difficult to play in combination with your teammates when your attention is focused on the opposing players. The upshot is that the visiting team loses more often than it would playing the same opponent at home (home advantage).

In the NHL prior to the instigator rule the threat of defeat was augmented by the threat of being beaten up. The hometown crowd cheered just as lustily for the home player in a fight as it did for the home team to win. In consequence, attentional narrowing was more acute and its consequences were set on a surer course toward home advantage. Then, when the instigator rule was imposed, the teams and players realised that the NHL Board was serious, that it required them to fight less. However, if there was less fighting or the players thought there would be, then the threat posed by the opponents was reduced, and so was attentional narrowing. To that extent the home advantage became less certain and, on average, smaller.

What do you plan to investigate next?

Home advantage in the NHL was last modified: April 15th, 2020 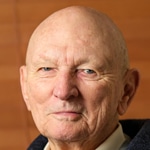 Since 2003, Dr Jones has investigated the home advantage in both individual and team sports, especially what the interaction is between the hometown crowd and the visiting players that puts the latter at a disadvantage.

While at the College of Medicine, Dr Jones’ work was primarily funded by the U.S. Office of Naval Research. Since his retirement in 2003, his work has been self-funded.