Engineering & Technology
To fulfil the promise of the “NewSpace” revolution and open the door to commercial space exploration that is accessible to everyone, low-cost space technologies are necessary. In order to lower the cost of spacecraft propulsion, Dulce Melo-Máximo from the Tecnológico de Monterrey in México and Luis Fernando Velásquez-García from the Massachusetts Institute of Technology report on the first additively manufactured (3D-printed) electrospray thrusters to be used in nanosatellites. These thrusters are not only cheaper and quicker to manufacture, but they also use propellant fuel very efficiently. This important development is a significant contribution to the democratization of nanosatellite propulsion technology.

If you have ever watched a space-themed documentary or sci-fi show, you will be familiar with those large bursts of fiery tails that explode out of a spacecraft to make it move. Because there is no air in space, spacecraft have nothing to push against in order to induce movement. Moving from point A to point B in space is, therefore, not straightforward. A spacecraft that is static in space with no forces acting upon it will not be able to move, while orbiting spacecraft will simply float along their orbits and bounce off anything that gets in their way. For some satellites, orbiting freely is enough for them to fulfil their purpose, but other spacecraft that need to move to and from specific points in space need thrusters – the parts of the spacecraft that produce those fiery tails – to be able to direct their motion. 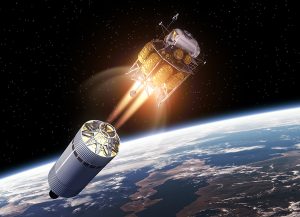 The manoeuvring of spacecraft through space using these propulsion thrusters is based on Newton’s Third Law, often referred to as the action-reaction law. More specifically, Newton’s Third Law states that every force applied in a given direction produces an equal force in the opposite direction. In the context of spacecraft propulsion, the force generated by the violent expulsion of a glowing plume by a thruster results in an equal force that pushes the spacecraft in the opposite direction. A single burst of the back thruster will propel the spacecraft forward, and the motion will continue either until another thruster is used to stop or change direction, or until an obstacle comes in the way of the spacecraft. These basic rules apply for any device that requires directed motion in space, be it a larger spaceship with a crew or a small satellite sent into space to fulfil a specific purpose.

The manufacture of small-scale electrospray thrusters is very expensive and time-consuming, which hinders their use and the further development of small scale, low-cost space technology.

Propelling nanosatellites into the “NewSpace”
Space was once a dream that a few countries raced to reach first, and that only a few countries had access to for a long time. However, since the first human travelled into the great unknown, many other countries, agencies and even industries have gained access to space. The concept of “NewSpace” has emerged to refer to a new wave of space accessibility, in particular as it relates to the growth of a commercial space industry. The interest in exploring space goes further than a desire to visit it: space offers many opportunities for applications on Earth, namely related to the Internet of Things, asset tracking, and Earth observation and monitoring, for example.

To put space and its potential applications within everyone’s reach, and to allow for the fulfilment of the “NewSpace” revolution, the cost of space travel and related technology must be dramatically reduced. In particular, there are a number of target-focused space missions that can benefit from less expensive, small satellites that can easily be launched and manoeuvred through space. To this end, it is currently possible to manufacture nanosatellites weighing only 1-10kg. These small spacecraft are usually called “CubeSats”, made up of one or more standard units—a cube-shaped structure measuring 10cm on each edge that weighs approximately 1kg. These nanosatellites need scaled-down propulsion engines that allow their controlled movement in space at a relatively low cost. 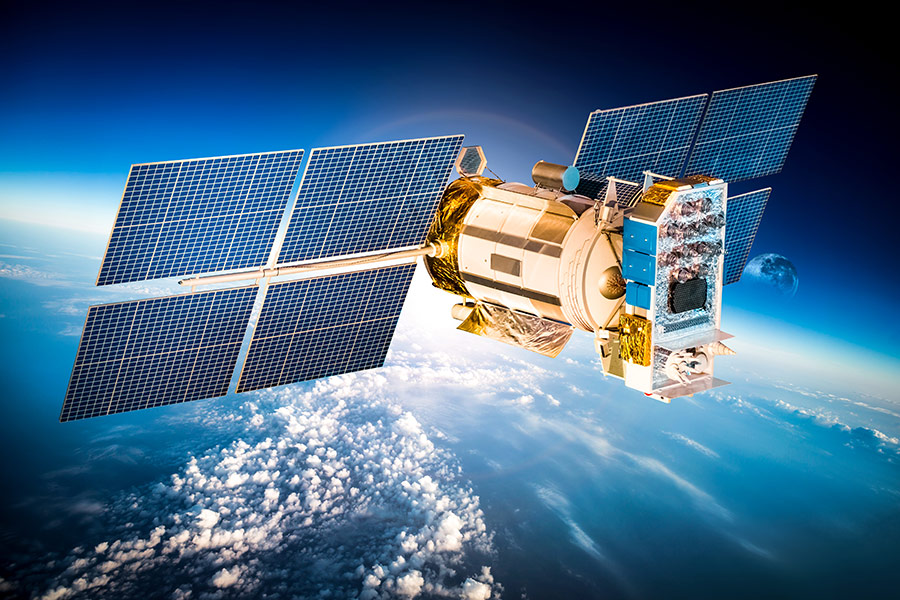 An attractive technology to propel and manoeuvre nanosatellites is based on electrohydrodynamic jetting of charged particles from a liquid propellant. These rockets are called electrospray thrusters and can be engineered in a way that can be relatively easily scaled down. Importantly, the particles emitted by these electrohydrodynamic thrusters can be either positively or negatively charged, allowing the spacecraft to keep charge neutrally by alternating the kind of particles being emitted by the thruster. Electrospray thrusters can propel nanosatellites efficiently, consuming less propellant than competing technologies and are therefore more cost effective. Nevertheless, the manufacture of small-scale electrospray thrusters is very expensive and time-consuming, hindering their use and the further development of small scale, low-cost space technology.

3D printing thrusts space technology
The NewSat program, a collaboration between Dr Luis Fernando Velásquez-García, Professor Wojciech Matusik, and Professor Maria Yang of the Massachusetts Institute of Technology, and a consortium of Portuguese institutions led by Gustavo Dias and Nelson Ferreira from the company Stratosphere S.A., is exploring additive manufacturing methods – 3D printing, in other words – to demonstrate low-cost, high-performance hardware for nanosatellites. Working under this program, Melo-Máximo and Velásquez-García report on the proof-of-concept demonstration of low-cost, additively manufactured electrospray sources to be employed as nanosatellite thrusters. Briefly, their thrusters are square devices with 25.4 millimetres on each side and 10mm high, made of either polymer or metal, weighing under 21 grams, that contain an array of sharp conic needles. A dense forest of thin nanowires, of 45–345 nm diameter, is grown onto the squares creating a nanostructured porous material that transports liquid between the propellant reservoir and the needle tips where, if a suitable bias voltage is applied (using as counter-electrode a metal plate with an array of apertures that faces the array of needles), emission of charged particles takes place, producing thrust.

The choice of propellant is an important factor that affects thruster performance. Ionic liquids (salts that are liquid in standard environmental conditions) are a popular choice of electrospray thruster propellant. In this work, Melo-Máximo and Velásquez-García chose the ionic liquid 1-ethyl-3-methylimidazolium tetrafluoroborate (EMI-BF4) as propellant due to its high electrical conductivity and negligible vapor pressure. Importantly, EMI-BF4 also produces near-symmetric positive and negative plumes that facilitate attaining a spacecraft’s charged neutrality.

This development is an outstanding advancement in space propulsion technology, since it allows for
significant propellant fluid savings, and hence lower costs, without compromising performance.

Another factor that affects electrospray thruster performance is the spread in the properties of the charged particles it produces. At a given polarity, electrohydrodynamic thrusters usually emit various types of charged particles, which significantly reduces the specific impulse of the thruster—a measure of how efficiently an engine uses propellant. On the other hand, the 3D-printed devices reported by Melo-Máximo and Velásquez-García are the very first electrospray thrusters for which pure-ion emission from ionic liquids was observed. This unique characteristic has resulted in a specific impulse for a given bias voltage that is, in fact, higher than the current state-of-the-art technology. This development is an outstanding advancement in space propulsion technology, since it allows for significant propellant fluid savings, and hence lower costs, without compromising performance.

In addition, the 3D printing methods used by the research team to produce the electrohydrodynamic nanosatellite thrusters reported in their study have advantages over the commonly employed precision subtractive manufacturing methods, such as laser machining and cleanroom microfabrication, which are very expensive and time-consuming. The manufacturing methods used by Melo-Máximo and Velásquez-García allow for the production of devices in a matter of days and incur a cost of only tens of dollars per device (about two-orders-of-magnitude reduction in both cases), while still being versatile and attaining high performance. Both the faster production and lower cost helps to shorten design iterations, since 3D printing allows for small- or medium-sized batches of test units to be cheaply and quickly produced. Furthermore, these thrusters and other devices developed by the Velásquez-García group at MIT are examples of how multi-material additive manufacturing can implement complex hardware that is not feasible or impractical to create with other manufacturing methods and/or that can attain better performance than the state of the art. The remarkable results achieved by Melo-Máximo and Velásquez-García with their reported thrusters are an important contribution to the efforts to democratize nanosatellite propulsion technology and to expand access to the “NewSpace”. 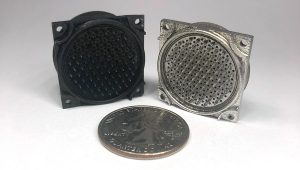 The work developed by Melo-Máximo and Velásquez-García was sponsored by the Monterrey Tec-Massachusetts Institute of Technology (MIT) Nanotechnology program and the NewSat project. The NewSat project, mentioned earlier, is co-funded by the Operational Program for Competitiveness and Internationalisation (COMPETE2020), Portugal 2020, the European Regional Development Fund (ERDF), and the Portuguese Foundation for Science and Technology (FTC) under the MIT Portugal program.

What type of spacecraft could these 3D printed thrusters be fitted into, and which missions are they likely to be on?

<> The thrusters are intended to propel satellites. However, the propulsion technology we report is modular (the engine is an array of emitters, and the size of the array is arbitrary); therefore, arguably, large-area thruster panels could be developed to produce thrust levels of interest to a wide range of satellite sizes, from standard (large, school bus-sized) satellites to cubesats. The high specific impulse attained by these thrusters is ideal for long-term missions (e.g., travelling to deep space, continuously correcting the spacecraft’s orbit) because those are missions where the propellant savings that result from using a thruster with high specific impulse would make the most difference. 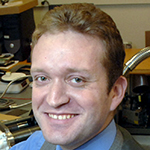 Dr Luis Fernando Velásquez-García is a principal investigator with the Microsystems Technology Laboratories of the Massachusetts Institute of Technology. He leads a group that uses micro and nanotechnology to conduct fundamental and applied research on systems that harness high electric field phenomena, focusing on space, healthcare, energy, and manufacturing applications.

This work was sponsored by the Monterrey Tec-Massachusetts Institute of Technology (MIT) Nanotechnology program and the NewSat project. The NewSat project is co-funded by the Operational Program for Competitiveness and Internationalisation (COMPETE2020), Portugal 2020, the European Regional Development Fund (ERDF), and the Portuguese Foundation for Science and Technology (FTC) under the MIT Portugal program.

This research is part of the NewSat program that is exploring additive manufacturing to implement better and more capable nanosatellites. NewSat is a collaboration between Dr Luis Fernando Velásquez-García, Professor Wojciech Matusik (EECS), and Professor Maria Yang (MechE) from MIT, and a consortium of Portuguese institutions lead by Gustavo R. Dias and Nelson Ferreira from Stratosphere S.A.