2019 was the end of the warmest decade on record. Carbon dioxide (CO2) levels in the atmosphere reached record levels, and meanwhile, emissions show no sign of peaking. Reducing global CO2 output is a crucial component in conserving a liveable world.

As a result, many countries, notably including all of those in the European Union, are committed to having net zero emissions by 2050. However, many climate models – especially those pathways which meet 1.5 °C warming target − involve utilising carbon-reduction technologies which haven’t been invented yet, or at least, are not proven to work at scale.

These technologies aim to reduce greenhouse gas emissions by capturing CO2 and converting it into other materials. Particularly attractive is the possibility of using the gas as a carbon source for synthesising useful chemicals – this provides an added benefit of reducing our dependency on fossil fuels, which would otherwise be the feedstock for these industrial chemicals. Converting carbon dioxide into biofuels, for example, could compliment intermittent green energy sources such as wind and solar. 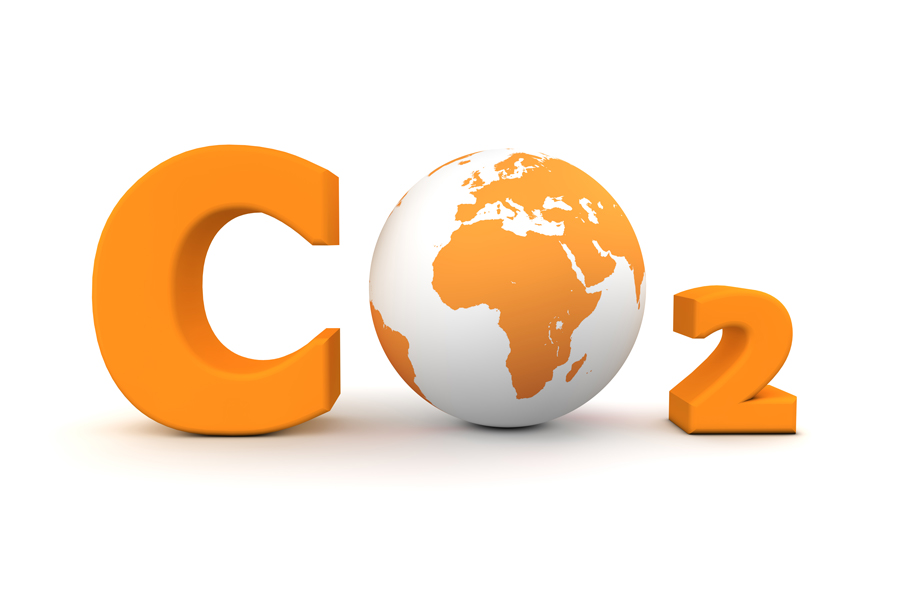 The Carbon Dioxide Reduction Reaction
There is a process – the CO2 Reduction Reaction (CO2RR) – which does exactly this, converting CO2 into industrially important substances like methane, ethylene, formate, and carbon monoxide. This is an electrochemical process, meaning that a current is applied using electrodes through a mixture of materials, including carbon dioxide, and the products are evolved at the electrodes. Reduction in the electrochemical sense does not mean lowered, but that CO2 gains electrons during the reaction in order to reach the end product. This is the opposite of oxidation, which we see when metal rusts or fruit turns brown.

Some of these products are more desirable than others, and some are more easily obtained too. Both carbon monoxide and methane have been demonstrated to work at a reactor scale, meaning that they might be implemented relatively soon. Various other carbon-containing compounds are obtained using different catalysts, which favour different CO2RR products.

Creating ethylene from CO2 has been demonstrated using copper catalysts, but there are a couple of barriers preventing this technology becoming commercially viable.

Ethylene, also called ethene or C2H4, is one of the more elusive. It is a highly important chemical, able to be converted to many products, but by far its main application is in creating polyethylene, the most commonly-used plastic in the world. Creating ethylene from carbon dioxide has been demonstrated using copper catalysts, but there are a couple of barriers preventing this technology becoming commercially viable.

Barriers to scaling up
The first problem is that the copper-catalysed reaction creates a few other products alongside ethylene, including carbon monoxide, hydrogen gas and methane.

The second is that scaling these reactions up necessitates the use of high currents, which drives a reaction that reduces water, creating even more hydrogen.

These are significant limitations – producing a pure product is essential if this process is going to become economically viable.

Micropores: the key to selectivity
Can the CO2RR process be modified in a way which results in high quantities of ethylene? This is the conundrum being tackled by Samuel Perry, Research Fellow at the University of Southampton, UK, with collaborators at the University of Edinburgh, McGill University in Montreal, and the Schaeffler Group based in Germany.

His team is addressing these issues by designing modified copper catalysts which have protective coatings that can convert CO2 selectively to ethylene. This coating is a thin layer of material deposited onto the catalyst, which coats the electrode. The electrodes used are porous and made from carbon fibre, allowing the gas to diffuse quickly through the electrode, which facilitates a higher rate of reaction.

The novel protective coating is made from polymers with intrinsic microporosity (PIMs), a type of material which – you guessed it – contains very small pores. These pores are so small that bubbles cannot form, the theory being that CO2 would be trapped close to the catalyst surface allowing for a longer reaction time. Notably, ethylene is a ‘two-carbon’ product, which involves the formation of carbon – carbon bonds at the catalyst active site. This process happens in a different pathway to the formation of methane, and benefits from extended exposure to the catalyst. The carbon dioxide held in this accessible state is referred to as the “triphasic interface”, since the gas (CO2) is held in a liquid electrolyte solution near a solid catalyst.

Testing for ethylene selectivity
Having built a set of electrodes and coated them with a thin porous layer of copper nanoparticles, Perry and his team deposited PIMs on the electrodes in various thicknesses, and used them to perform tests to determine if the PIM had an effect on the selectivity of the reaction towards ethylene.

Carbon monoxide is a key intermediate in the production of ethylene from CO2, and Perry hypothesises that the micropores in the PIM hinders carbon monoxide release, meaning it can be further reduced to ethylene, increasing the overall yield.

Unexpected effect on catalyst stability
Another important factor in determining whether PIM-coated electrodes are suitable for upscaling as a technology is the stability of the catalyst. This is a key challenge in CO2 reduction, because of a phenomenon known as electrode flooding, which is when a liquid electrolyte seeps into the porous carbon electrode structure. When this happens, it prevents the carbon dioxide gas from flowing to the catalyst and slows the reaction rate down.

PIMs improved the selectivity of copper catalysts from 19% to 46% ethylene.

Usually, this problem is mitigated by using hydrophobic components in gas diffusion electrodes, to repel water. However, this is generally not particularly effective: whilst it works well at first, over only a few hours of use the hydrophobicity wears off. It’s only a matter of time before the electrode fails due to flooding.

Thicker layers of PIM allow more water to accumulate in the electrode, meaning that the electrode quickly floods. This effect is caused by the PIM being less hydrophobic than an electrode which hasn’t been coated.

However, thinner layers of PIM showed a minimal decrease in the hydrophobicity, but still gave all of the catalytic benefits for ethylene production. The thin PIM coating also slowed the rate of hydrophobicity loss, meaning the electrode works for a longer period of time.

Developing the catalysts of the future
Whilst the PIM increases the performance of the copper electrode in the CO2RR, the technology is definitely not perfect yet. Perry outlines that there are further improvements and implementations that would enhance the performance further, including changing the substance that the PIM is made from, especially favouring PIM materials with high hydrophobicity to reduce the chance for electrode flooding. The researchers also suggest that PIM coatings should be tested on catalysts other than pure copper; many types are being tested by other research groups.

This technology represents a sizeable step towards making the electrochemical synthesis of important chemicals and fuels from CO2 viable in an industrial setting. What makes it particularly exciting is that it could become economically beneficial for industry to reduce carbon dioxide emissions, which in turn would lessen our dependency on fossil fuels, and provide energy security for intermittent green energy sources.

In your research, you reference how this reaction can be complimented with oxidation of H2O into H2O2, hydrogen peroxide. Can you describe how this would contribute to a commercial reactor design?

<> In a “standard” electrochemical cell, we have a tendency to just focus on one electrode. In our case this is the negative electrode (cathode), which reduces CO2. Also in our cell we have a positive electrode (anode), which balances the charge in our cell. If we don’t think about the anode in our design, any current passed here is wasted on background reactions. Instead, we can use an anode catalyst that selectively oxidises H2O to H2O2, allowing us to make two useful products for the same amount of energy. This would make the process much more cost effective and energy efficient.

Samuel Perry is a Research Fellow at University of Southampton with expertise in electrochemical catalysis, surface chemistry, scanning probe electrochemical sensing and numerical modelling. He is a leader for the CO2 reduction package of the Horizon 2020 CO2EXIDE project, responsible for directing research, mentoring students and communicating new discoveries.

Dr Perry is currently working on experimental and simulated studies into the electrochemical reduction of carbon dioxide. His other research interests include microelectrodes, SECM, biosensors and corrosion.

This work is supported as part of the CO2-based electrosynthesis of ethylene oxide (CO2EXIDE) project, which receives funding from the European Union’s Horizon 2020 research and innovation programme in co-operation with the sustainable process industry through resource and energy efficiency (SPIRE) initiative under grant agreement no. 768789.