Health & Medicine
Our innate immune system is our first line of defence against disease. At the heart of this response is an enzyme complex, called NADPH oxidase, which produces a form of reactive oxygen molecule to destroy invading pathogens. Professor Edgar Pick of Tel Aviv University, has made a huge contribution to this field of research, enhancing our understanding of the foundations of innate immunity in many different ways. The discoveries made by Professor Pick and his colleagues could allow the development of treatments for a number of serious illnesses.

We are born with the ability to fight disease. Our innate immune system, driven by the genes we inherit from our parents, is our first line of defence against invading pathogens. Unlike our adaptive immune response, which remembers our previous encounters with particular pathogens (including bacteria and viruses) and mounts a target-specific response, the innate immune system is non-specific. Instead, it acts as a first and fast blockade to infection. The innate immune system includes physical barriers, like the skin, chemical mediators, and a variety of cells that destroy invading pathogens.

The group of cells that fight infection are the leucocytes, also known as “white blood cells.” There are different types of white blood cells; some form a part of the adaptive immune response, while others play a key role in innate immunity. Among this latter group are a class of cells called phagocytes. Phagocytes protect the body by engulfing bacteria and harmful foreign particles, in a process called phagocytosis. Once inside the phagocyte, the pathogens are destroyed by a series of complex biochemical reactions. 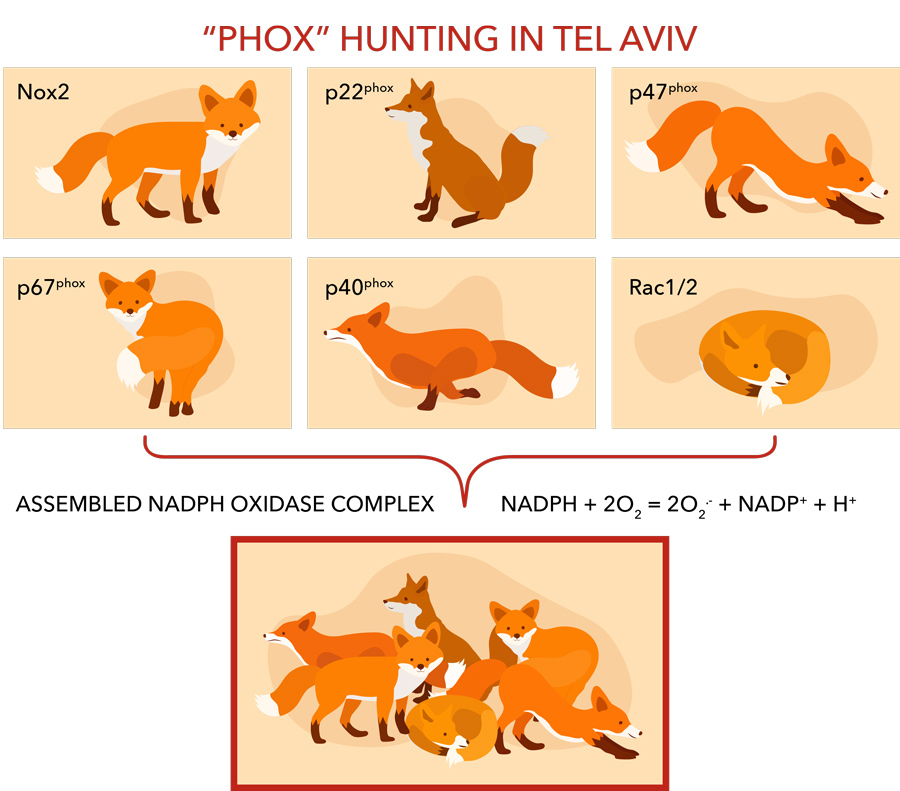 To destroy the pathogens they have engulfed, phagocytes produce molecules called reactive oxygen species (ROS). These are a group of highly reactive oxygen-containing molecules, most of which originate from a simple molecule called superoxide. Superoxide is a molecule of oxygen with one supplementary electron, a state which makes it very reactive. One of the more familiar examples of a ROS is hydrogen peroxide, usually derived from superoxide. In phagocytes, ROS are responsible for the destruction of pathogens: a process at the core of innate immunity.

Sometimes, children are born with a rare inherited condition that renders them unable to produce ROS. The condition, known as Chronic Granulomatous Disease (CGD), leaves sufferers highly susceptible to life-threatening infections. People with CGD usually experience repeated serious bacterial or fungal infections. Understanding how leucocytes produce ROS is essential for developing treatments for people with CGD. Some diseases are caused by an excessive production of ROS and research on the NADPH oxidase leads to the design of drugs able to combat the damage caused by ROS.

The creation of the “cell-free system”
Professor Edgar Pick has devoted his career to pursuing a deeper understanding of innate immunity. Specifically, Professor Pick has studied the complex pathways by which leucocytes produce ROS to destroy pathogens. While ROS are a vital component of the immune response, they are also a dangerous tool; if not carefully regulated, ROS can damage the body’s own tissues. Using ROS against pathogens while simultaneously preventing damage to the body’s cells is a delicate balancing act.

In phagocytes, the production of ROS is driven by an enzyme complex called NADPH oxidase. This enzyme takes its name from its ability to create superoxide from oxygen by using a molecule called NADPH, as an electron donor. Superoxide is then converted to hydrogen peroxide, which effectively destroys pathogens engulfed by phagocytosis, sometimes with the aid of the enzyme, myeloperoxidase. 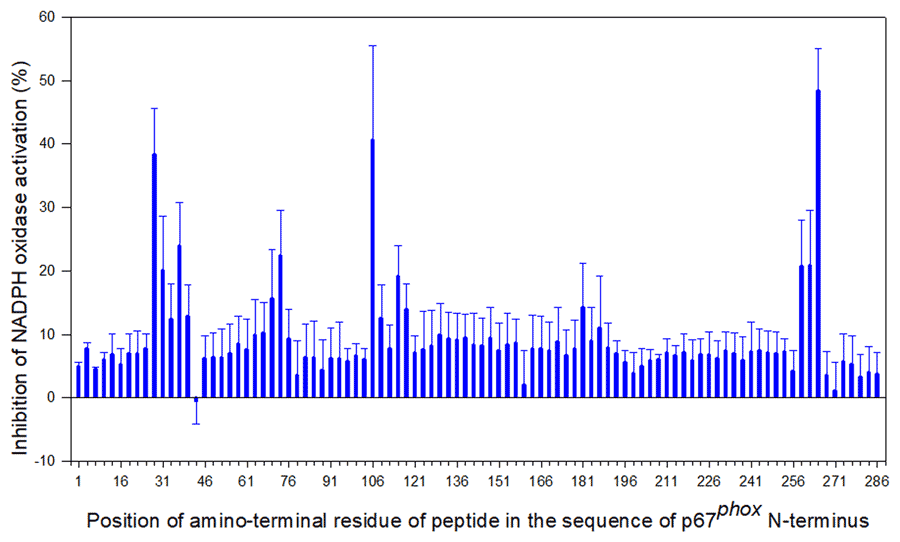 In many areas of biological research, investigators use in vitro techniques – that is, the experiment is conducted outside of living cells or organisms (in contrast to in vivo studies, which do involve using living cells or organisms). In vitro work has a number of advantages; for example, conditions can often be controlled more easily, and experiments are carried out with greater accuracy and speed.

In the early 1980s, Professor Pick, together with laboratory colleagues, developed a “cell-free system” for studying the activity of NADPH oxidase1. The foundation of this system was NADPH oxidase taken from unstimulated phagocytes (i.e. those that were not actively engaged in phagocytosis), and, at a later stage, by assembling the system from a collection of proteins (known as “recombinant” because they were generated by molecular biology methods) into the functioning enzyme. Superoxide production could be induced fully in vitro by a simple chemical activator, such as arachidonic acid (a fatty acid present in phagocytes).

In phagocytes, ROS play a paramount role in the destruction of pathogens: a process at the core of innate immunity.

The cell-free system allowed Professor Pick together with other researchers to identify and describe the different parts of the NADPH oxidase enzyme in great detail. Crucially, the investigators found that NADPH oxidase is composed of two key parts: a protein (known as cytochrome b558), which catalyses the formation of the superoxide, and a second piece which tells the protein what to do and when to do it. This knowledge offered the key to better understanding of CGD, and was an important step towards developing treatments for the disease.

In one important discovery, Professor Pick found that one of the key cytosolic components is a protein called Rac2. Rac plays a vital role in activating NADPH oxidase. Rac does this by bringing the cytochrome and one of cytosolic parts of the enzyme, known as p67phox, together;3 once assembled, the enzyme can catalyse the creation of superoxide.

Following this discovery, Professor Pick’s research developed into two separate strands. In the first of these, Professor Pick and colleagues developed a novel method called “peptide walking.”4 Peptides are the building blocks of proteins. When applied to this research, peptide walking involves breaking down NADPH oxidase proteins into their component peptides. This allows the researchers to define the role of “active sites”, represented by specific peptides, in the function of each component and of the enzyme as a whole.

In contrast to CGD, there are other diseases in which too much ROS is produced. By using peptide walking, Professor Pick and his colleagues were able to identify peptides that could serve as potential candidates for the design of drugs that block the activity of the enzyme. “Switching off” the enzyme by blocking “active sites” on one of its components by peptides would be an effective way to limit production of cell-damaging ROS.

The cell-free system allowed Professor Pick to identify and describe the different components of the NADPH oxidase enzyme complex in great detail.

In the second research strand, Professor Pick contributed to establishing that a protein, known as Nox2 (a part of the cytochrome), is the only part of NADPH oxidase that performs the catalytic action of the enzyme in generating superoxide5. This was proven by removing the cytosolic components of the enzyme and replacing them with certain lipids (fats), known as phospholipids, which were found capable of making Nox2 produce superoxide as effectively as with the help of the cytosolic components.

Building trimeras
This research allowed Professor Pick and his colleagues to have a detailed understanding of the structure and function of NADPH oxidase. As a next step, the researchers decided to create chimeric molecules (chimeras), by sticking together parts taken from different components of the enzyme. In fact, the team created what they termed a “trimera”, meaning a chimera composed of three parts, each taken from a different cytosolic component of the enzyme6. Every part of the trimera was chosen to contain one or more of the “active sites”, present in the components serving as the building blocks of the trimeras. 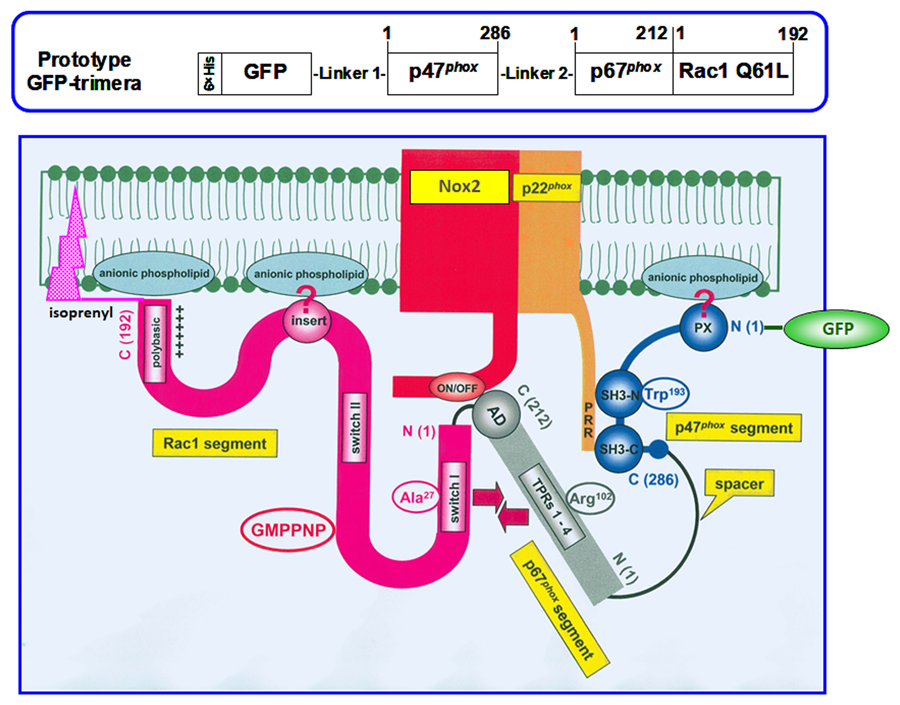 The trimera proved to be capable of performing the role of the original cytosolic components in vitro, without the need for those components to be present. With these abilities, the trimeras have become valuable tools in screening potential drug treatments for over-production of ROS.

Most recently, Professor Pick has focused on the interaction between the cytosolic component p67phox, and Nox27, 8. The evidence gathered showed that, at the molecular level, p67phox changes from a “resting” to an “activated” state when ROS production is required. In turn, p67phox causes Nox2 to change shape, allowing the enzyme to begin catalysing the production of superoxide. Understanding more about the relationship between the two structures will shed light on how ROS are created and why, in some diseases, an excess of these destructive molecules is generated.

At the core of innate immunity
Over several decades, Professor Pick’s work has shone an ever-brighter light on the complex pathways at the core of our innate immunity. As well as broadening understanding of the role of NADPH oxidase and ROS in tackling pathogens, the research carried out by Professor Pick and his colleagues has built a foundation for the development of treatments for serious diseases, including CGD and illnesses in which ROS is over-produced. His work is a perfect example of the mutual interdependence of basic research and clinical medicine (these days called “translational research”). Just as an example, the design of the very basic “cell-free system” led to the discovery of the cytosolic components and this led, as in a chain reaction, to the discovery of the genetic causes of some types of CGD – namely, genetic mutations in three crucial cytosolic components. His recent work on the p67phox–Nox2 interaction also led to the elucidation of the cause of a form of CGD due to a mutation of a single amino acid in Nox2. In future, the research described here will continue to inspire new routes for investigation into the complex and delicate systems behind our ability to fight off disease and will, we hope, demonstrate the wisdom of generously supporting basic research.

In your opinion, what should be the current research priorities in the field of innate immunity?

Reactive oxygen species are at the heart of innate immunity was last modified: October 2nd, 2020 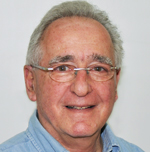 Dr Edgar Pick graduated with an M.D. from the Hebrew University Hadassah Medical School in Jerusalem in 1965. He completed postdoctoral training in Immunology at the Scripps Clinic and Research Foundation in La Jolla (USA), (1965-1967), and at the Institute of Dermatology, London (UK), (1967-1970). He graduated with a Ph.D. at the University of London (UK) in 1970. Dr Pick joined the Sackler Faculty of Medicine, Tel Aviv University, in 1970 and rose to Professor in 1979. He led the J. F. Cohnheim Laboratory of Phagocyte Research until 2019.

A series of findings made by Edgar Pick’s research group over the last four decades has significantly contributed to the elucidation of the structure and function of the superoxide generating NADPH oxidase of phagocytes.