Education & Training
Concept mapping is an active learning technique that involves representing connections between ideas in a diagrammatic way. Director of the Center for Excellence in Teaching and Learning at Morgan State University, Dr Catherine Martin-Dunlop has been carrying out research into the learning strategy to confirm whether it could be the key to improving the academic performance, self-efficacy and metacognitive skills of, particularly, under-represented undergraduate students studying biology.

Anyone who has studied at a higher education college or university will well remember the traditional lecture format of teaching. Your professor recited a topic or relayed a theory to you from behind a lectern, occasionally accompanied by slides or a PowerPoint presentation. You frantically took notes, trying to capture all the key points, and inevitably missed much of the lesson. Many times you would go back to your scribblings at a later date to find that you could not understand what you had written down, or how a fact related to the subject at all. Equally, you might have been a student who simply listened in the hope that some of the information would sink in (and stay in!).

While these more passive methods of learning do suit some students, it is becoming increasingly likely that instructors and lecturers will employ more active learning techniques in order to help engage and motivate students, and ultimately, improve academic performance. 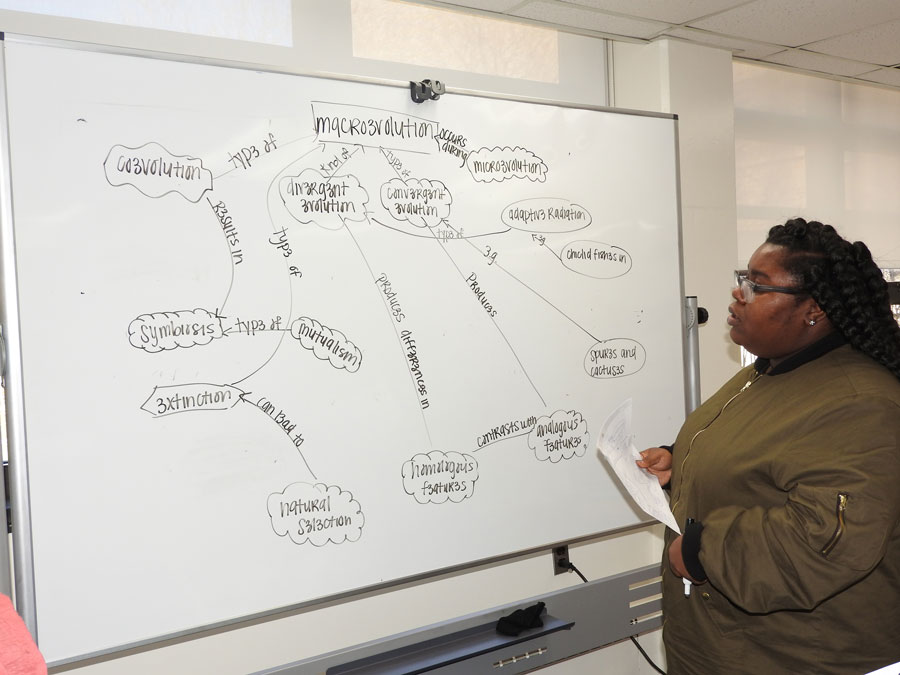 Advantages of active learning
One such technique is ‘concept mapping’, a strategy developed by Joseph D. Novak and team at Cornell University in the 1970s as a means of representing the emerging science knowledge of students. A concept map is a diagrammatic way of representing relationships between ideas, words or images. The key ideas, words or images are connected by arrows with linking words that explain the connection between two points, and are arranged in a hierarchical, multi-level fashion. The aim of concept mapping is to develop logical thinking and effective study skills by revealing the connections between things and challenging students to think beyond individual facts and thoughts to see the bigger picture. This active learning tool has the potential to increase knowledge retention of lessons as students are no longer passive recipients of information; students must participate with their mind and body while learning. Additionally, by making a student’s understanding (or lack of) clearly visible in diagram form, instructors or other classmates can ‘see’ the thinking and learning process; errors are easily identified and corrected. Adding elements of collaborative learning to the approach can further enhance the method; students work together to debate and build the maps. The revision of concept maps can help students retain information for longer, as well as improve metacognition and self-efficacy as they transition to the more academic learning environment of a higher-education institution.

Despite lectures being shown to be an ineffective teaching method, if used 100 percent of the time, it is still the most common teaching approach in science education around the world. Few university lecturers are given formal training on which learning methods their students are likely to find most effective, and the tradition of the lecture has persisted. This dogmatism may well be having a direct impact on the academic performance and numbers of students (particularly under-represented student groups) continuing on to major in science, technology, engineering and mathematics (STEM) subjects in the United States. Research at the largest Historically Black College/University (HBCU) in the state of Maryland, Morgan State University, has found that 27% of students failed first-year biology in the 2015-2016 academic year (this figure excludes those who dropped out before assessment), despite it being the most popular major subject in the School of Computer, Mathematical, and Natural Sciences at the institution. Many students were found to swap their major to a non-STEM subject after the first year of study and enrolment in one or two introductory biology courses. It has previously been attested that the first two years of college are the most crucial to retention and recruitment of STEM majors; it is clear that a greater effort needs to be made in this time period to engage students so that not only their learning and grades are improved but so that they feel confident in their abilities and remain interested in the STEM topics on offer. Some researchers have suggested that concept mapping as a teaching and learning technique may be the key to re-engaging students in undergraduate biology education, especially because biology is such a vocabulary-rich subject traditionally taught through memorisation and rote learning methods.

Research into concept mapping
Dr Catherine Martin-Dunlop joined Morgan State University (MSU) in 2011 as an Associate Professor of Science Education. In 2017 she became the founding Director of the Center for Excellence in Teaching and Learning, which promotes best practises in teaching and learning that embrace diversity and lead to student success. Recently, Martin-Dunlop led a three-year National Science Foundation-funded project at MSU, comparing a group of students who were introduced to concept mapping in their classes (219 students) and a control group (175 students) who continued with more traditional learning methods. The average student age was 20 years; 68% were female, 28% male, and 4% transgender. 87% were identified as African-American/Black. The students chose their own instructor and class time, and were not assigned to either group. Between 2016 and 2019, four biology instructors used concept mapping in their classes on a regular basis, aiming to improve the students’ academic performance, self-efficacy and metacognitive skills. It was also hoped that these metacognitive skills would be transferable to other subjects, increasing students’ overall academic achievement and retention rates.

Both student groups were asked to fill out the ‘Self-Efficacy And Learning Survey’ (SEALS) at the beginning and the end of the course allowing for comparison within and between groups. SEALS asks participants to rate their own beliefs on seven things: academic self-efficacy, elaboration, organisation, metacognitive self-regulation, metacognitive responsiveness, peer learning and critical thinking. Students were also interviewed about their study strategies for biology and 100 of the concept maps were collected and scored using a scoresheet to indicate a student’s skill at concept mapping and a possible correlation with biological knowledge. Relationships between students’ final course grades in both groups and the seven elements of the SEALS were statistically compared.

Following analysis of the study results, the project team noted that although the concept mapping learning method did not have statistically significant impact on all the skills related to students’ metacognition, peer learning made a significant improvement on the post-test for this group. In addition, the concept mapping group showed a significant improvement in metacognitive self-regulation, suggesting that the concept mappers asked themselves more questions, set goals and could express themselves well when they could not understand a concept compared with the control group. Quotes from student interviews indicated that students appreciated how concept maps helped resolve confusion regarding certain tricky topics and how they revealed fellow students’ novel and diverse perspectives. Interestingly, students’ academic self-efficacy in both groups was found to be lower at the conclusion of the course, and there was no statistically significant difference in student grades between groups.

Mapping metacognition
So why is it that the expected significant improvements in academic performance, self-efficacy and metacognition are not apparent in the results of this project? Martin-Dunlop and her team suggest that it may be a result of the relatively short length of each course (15 weeks), a period in which improvements in metacognition cannot be expected to show; because the SEALS was not able to pick up on the nuances of positive changes to metacognition because of its ‘forced-answers’ format; because instructors need more training in the teaching method; or because more homework and practise of the concept mapping was needed to reinforce the strategy. In order to more thoroughly evaluate the potential of concept mapping to improve the student experience in the biology classroom and the positive impact this might have on academic results and individual metacognition, future research into the technique should include a longer implementation period than one semester and make much more effort to instruct the teachers involved in the strategy in a consistent manner. More broadly, further research into concept mapping and metacognition may be useful for those aiming to encourage and engage greater numbers of under-represented students in STEM subjects. 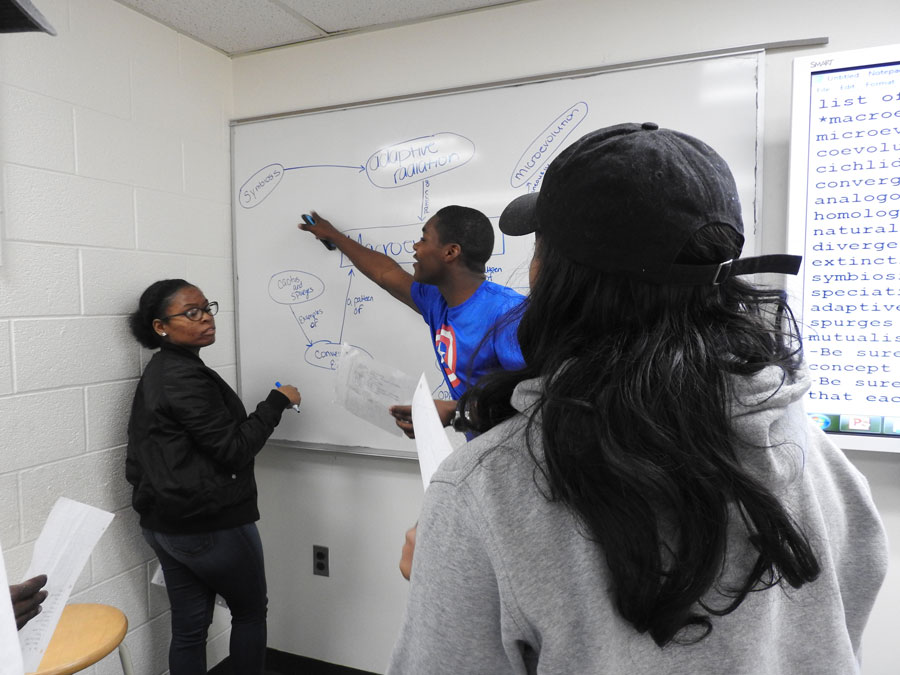 Are you planning any further research projects on concept mapping as a teaching/learning strategy, and if yes, what format will this take and how will it improve on the previous project?

<>Yes, I have started a follow-up project in which I focus on training instructors during both face-to-face and online workshops on how they can help students improve their metacognitive learning skills (or in other words, teach students how to learn). Two of the handful of metacognitive skills recognised in the research literature by neuroscientists are elaboration and organisation. I still believe that concept mapping helps with the development of these skills, and I am puzzled why the study did not reveal an improvement (along with peer learning and metacognitive self-regulation). So rather than having concept mapping as the centre of the study, I would like to have metacognition as the centre–and only use concept mapping as an example of how elaboration and organisation can be enhanced. This should improve the previous project because more upfront instructor training will take place helping to ensure validity of implementation. I now believe it is more important for students to develop their metacognitive skills than it is for them to develop their concept mapping skill. Good metacognitive skills will lead to lifelong learning. 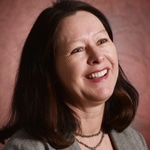 Dr Martin-Dunlop began her career at Morgan State in 2011 as an Associate Professor of Science Education. In 2017, she became the founding Director for the Center for Excellence in Teaching and Learning (CETL). CETL promotes best practices in teaching that embrace diversity and inclusiveness and lead to student success.