Health & Medicine
Around 2% of the European population suffer from atrial fibrillation, a heart condition characterised by a change in heart rhythm that increases the risk of serious health complications. Currently, therapies to directly address the arrhythmia are not used for all patients. The Atrial Fibrillation Network Association (AFNET) was the responsible organisation for the EAST-AFNET 4 trial, which set out to test whether systematic, early control therapy prevents adverse outcomes in patients with atrial fibrillation (AF) compared to usual care relying on restricted, symptom-driven use of rhythm control therapy. The main trial results and careful subanalyses demonstrate that early, systematic use of rhythm control can reduce AF-related complications by one fifth when added to the best currently available treatment. Implementation of early rhythm control therapy in patients with atrial fibrillation can help to reduce the devastating consequences of the arrhythmia, such as cardiovascular death, stroke, and heart failure.

Atrial fibrillation (AF) is the most common form of cardiac arrhythmia and disrupts the normal rhythm of the heart. AF causes an irregular (often abnormally fast) heartbeat, dizziness, and shortness of breath. Some people feel their heart fluttering or beating irregularly, whereas others do not experience any symptoms.

Although AF is often not recognised, so-called asymptomatic AF, even these silent forms of the arrhythmia can cause cardiovascular death, stroke, or heart failure.

Normally, the muscles of the heart contract and relax to allow blood to move in and out of the heart. In AF, the upper chambers of the heart, called the atria, are activated randomly. They stop contracting and the ventricles, the main heart chambers, contract irregularly. This means that the heart is unable to fully relax between contractions, reducing its efficiency and performance.

The number of patients who are diagnosed with AF in Western countries is rising, and it is estimated that the incidence of AF will have risen 250% by 2050.

Atrial fibrillation is the most common form of cardiac arrhythmia and disrupts the normal rhythm of the heart.

Treatment involves ruling out other causes of AF, such as an overactive thyroid. In addition, strokes related to AF can be prevented by taking blood thinners (anticoagulants). In addition, slowing a fast heart rate during AF using medications (‘rate control therapy’) and detection and therapy of concomitant cardiovascular conditions are important components of the treatment of patients with AF.

One of the risks associated with AF is an increased chance of experiencing a stroke: individuals with AF are five times more likely to have a stroke than other people. Therefore, many treatments focus on managing this risk. This is currently mainly achieved by using medications to thin the blood, to prevent blood clots forming which could cause a stroke. They may also be prescribed drugs to lower their heart rate.

Despite these treatments, people with AF remain at higher risk of heart and circulatory problems. This risk is also increased during the first year after diagnosis, a period often called ‘early atrial fibrillation’. Adverse events such as heart failure, stroke, and death still occur, suggesting that the current approach to treating AF requires further optimisation as new drugs and treatment techniques become more readily available.

Despite the findings in the old ‘rate versus rhythm’ control trials, the investigators of the Early treatment of Atrial fibrillation for STroke prevention (EAST-AFNET 4) trial and others were aware of mechanistic research suggesting that sinus rhythm is better for the heart, and for patients with AF, than remaining in atrial fibrillation. These considerations led to the design and conduct of the EAST-AFNET 4 trial.

EAST-AFNET 4
Previous studies suggest that rhythm control therapy is only recommended to alleviate AF-related symptoms, although it has the potential to eliminate the arrhythmia itself. The results of these studies also indirectly showed that rhythm control therapy, used in conjunction with anticoagulants, helped to prevent blood clots and help maintain sinus rhythm (normal heart rhythm).

The EAST-AFNET 4 trial aimed to test whether restoring a normal heart rhythm soon after diagnosis of AF can reduce the residual risk of health complications.

To meet the inclusion criteria for the study, patients had to have been diagnosed with AF less than a year before enrolment, as well as having a cardiovascular conditions such as a previous stroke, diabetes, kidney disease, or another heart problem.

The researchers recruited 2,789 patients from 135 different centres in 11 countries, and patients were followed up for an average of 5.1 years.

The results of the clinical trial showed that treatments which returned the heart to a normal rhythm reduced the risk of cardiovascular complications, including stroke and cardiovascular death, by around 20%. This improvement was observed in a wide range of patients with AF, including those with no symptoms, those with and without heart failure, and those who had a normal heart rhythm at randomisation.

The researchers also explored possible reasons for the clinical benefits seen with early rhythm control. They found that there were no differences in other cardiovascular treatments, such as anti-coagulation medications, that could explain the difference between the control and the early therapy group.

Finally, both treatment approaches were equally safe for patients. Although there were fewer deaths in patients treated with early rhythm control therapy, compared to the usual control group, this was not statistically significant.

Overall, early rhythm control therapy was found to be safe, did not require patients to spend longer in hospital and was associated with a lower risk of adverse cardiovascular outcomes than usual care in patients with recently diagnosed AF and cardiovascular conditions.

There was also no difference in outcome when symptomatic and asymptomatic (or silent) patient groups were compared in a further sub-analysis, suggesting that early, systematic rhythm control is beneficial for all patients with newly diagnosed AF, regardless of how their condition presents itself.

Further sub-studies and analyses
Currently, clinical guidelines recommend rhythm control therapy only for patients who have persistent symptoms and for a small subgroup of patients with heart failure. If not, it is delayed until later in the treatment pathway. This means that, despite the positive effect that rhythm control therapy can have for AF patients, it is only used to treat around one in seven patients with AF in Europe.

The EAST-AFNET 4 trial provides evidence that starting rhythm control therapy soon after diagnosis can improve outcomes in patients with AF. This finding can be extrapolated to patients who are symptomatic or asymptomatic and applies regardless of concurrent conditions such as heart failure. The findings will inform clinical practice in patients with recently diagnosed atrial fibrillation.

Why is early rhythm control therapy not currently recommended by more clinical guidelines?

The trial results were reported at the same time as the 2020 European Society of Cardiology atrial fibrillation guidelines were published. It will take time to include the findings into new guidelines. I am confident that international guideline committees will look into updating their guidelines at this point in time.

Metzner, A, Suling, A, Brandes, A, et al, (2021) Anticoagulation, therapy of concomitant conditions, and early rhythm control therapy: a detailed analysis of treatment patterns in the EAST–AFNET 4 trial. Europace, doi:10.1093/europace/euab200 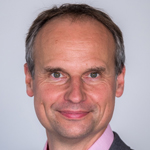 Paulus Kirchhof is Director of the Department of Cardiology at the University Heart and Vascular Center UKE Hamburg, and holds a part-time position as Professor of Cardiovascular Medicine at the University of Birmingham, UK. He studied medicine in Heidelberg, Lille, Georgetown, and Münster. After graduating, Professor Kirchhof learned and practiced cardiology at the University Hospital Münster. He worked in Birmingham from 2011, moving to Hamburg in 2020. He researches translational mechanisms and management of cardiovascular diseases, especially arrhythmias and heart failure. He is a highly cited researcher, an enthusiastic teacher, and a mentor for cardiologists and cardiovascular researchers.

The EAST-AFNET 4 trial set out to explore the effects of early control therapy on patients with atrial fibrillation.