Earth & Environment
Dairy farming can have negative effects on the environment, polluting waterways with an excess of nitrogen that can have long-term impacts. Research to date has addressed this problem by looking at ways to reduce the cow’s urinary urea nitrogen concentration, but this has involved mitigation techniques that paint the cow as the problem rather than the solution. Cameron Marshall, a PhD student under Professor Pablo Gregorini at Lincoln University, New Zealand, investigates how cow genetics may hold the key to reducing the environmental impact of pastoral livestock production.

As the world searches for solutions to the climate crisis and ways to reduce our environmental impact, attention has turned to focus on livestock farming and the negative effects that it can have on the environment. Farming production has increased globally, partly as a result of the use of nitrogen fertilisers which has resulted in an increase in high protein vegetation that supports a greater number of animals. However, this increase in farm production comes at great cost to the natural environment, especially in the case of dairy farming. These negative impacts are particularly problematic in temperate regions like New Zealand, where an increase in pastoral livestock production is contributing to widespread environmental degradation.

One of the ways that cows negatively impact the environment is through their inefficient use of nitrogen (N). When cows consume vegetation, they metabolise, or breakdown their food in the rumen (the cow stomach) which results in the production of nitrogen-containing urea, and must leave the body as waste, either in the urine or in the milk. Up to 70% of N ingested by cows is not used by the animal and a large percentage of it ends up being excreted; 20 – 30% ends up in groundwater as nitrates while 2% is transformed to nitrous oxide, a potent greenhouse gas which contributes to global warming.

The nitrogen that is leached to the groundwater eventually ends up in waterways, where excessive nitrogen content can cause eutrophication, a process that occurs when a body of water becomes overly enriched with mineral and nutrients. An excess of nutrients in the water can cause an algal bloom (excessive algal growth), which can block light from penetrating the water. This reduces photosynthesis (the energy transformation process used by plants) and can cause a depletion in oxygen to the point that the water body can no longer support life. Over time this can lead to a loss of ecosystem services and reduced biodiversity.

Research also suggests that nitrogen leaching can have detrimental impacts on human health, with a possible link between increased risks of colorectal cancer and higher levels of nitrates in drinking water. These production costs hamper the ability of these grazing production systems to meet several of the United Nations sustainable development goals including 6 (Water quality), 9 (Industry innovation), and 12 (Responsible production).

Cows as solutions, not problems
While the research to date has focused on a plethora of mitigation techniques that aim to reduce urinary N, limited studies consider the cows as part of the solution instead of the problem. A recent study by Cameron Marshall, Professor Pablo Gregorini and colleagues at Lincoln University, New Zealand set out to understand if cow genetics could be used to reduce nitrogen excretion.

Previous research has demonstrated that the milk urea nitrogen (MUN) concentration varies between individual cows, which is determined by the MUN gene. As Urea N levels across bodily fluids are highly related, MUN values are representative of urea levels of blood and other body fluids. Cows are assigned MUN breeding values based on their genetics and the amount of urea in their milk. Low MUN breeding values mean that the cows have low nitrogen in their milk urea, which suggests lower levels of urinary urea nitrogen.

Marshall and colleagues investigated whether MUN Breeding Values, diet, and stage of lactation influence urinary urea N concentrations in lactating grazing dairy cows. Their aim was to understand if there was a relationship between MUN breeding values and urinary urea nitrogen concentration and total excretion and if this potential relationship could be affected by different diets.

Cows were fitted with Lincoln University PEETER sensors to track urination behaviour. The researchers measured the frequency and volume of urination, as well as the nitrogen content of the cow’s urine and faeces. Milk yield and composition was also recorded.

Genetics determines nitrogen secretion
In their paper, Cameron Marshall and Professor Pablo Gregorini, Lincoln University, New Zealand, show that lower MUN breeding value cows excrete less urinary urea N, demonstrating that their genetics determine nitrogen secretion. There was 165.3 grams difference in urinary urea N excretion per day between the animals with the highest and lowest MUN breeding values in this experiment. When this information is extrapolated to include a herd of cows across a pasture, these results suggest that keeping only cows with the lowest MUN breeding values could mean a 28% reduction in urinary urea N loading per 0.57 m2. Importantly, these differences between low and high MUN cows existed regardless of season and diet which would mean that the farmers would not need to change their production systems.

While this study made use of natural variation in MUN breeding values within a herd of cows, breeding programmes could be implemented that target low MUN cows. A major objective for reducing eutrophication is to reduce the number of nitrates that are absorbed into groundwater. If farmers could reduce the N excreted into the environment through breeding cows with lower MUN breeding values, they could reduce their environmental impact and meet key legislative concerns at both a national and international level.

Low MUN cows could be more profitable
Aside from lower urinary urea N concentration, cows with low MUN also offer other advantages. Cows with lower MUN breeding values had the same milk yield as cows with a higher MUN, yet the milk produced had greater levels of milk protein when compared to cows with a higher MUN. This higher protein percentage means that the cows produce increased milk solids (fats and protein) which provides an economic benefit to dairy systems that pay on a milk solid basis, such as those found in New Zealand.

…low MUN cows are a viable animal-based solution to reducing N losses from grazing based production systems to the environment.

Not only do these cows offer the potential for increased revenue, but reducing the nitrogen leaked into the environment from these grazing production systems will help farmers to meet legislative agreements and reduce the likelihood of them receiving hefty fines.

Win-win situation
The results from this study are the first to confirm that using cow genetics to produce animals with a low breeding value for the MUN gene can help reduce the environmental impacts of dairy farming and enable the dairy industry to meet national and international environmental targets.

By using low MUN cows, the industry could directly reduce the amount of nitrogen that is leached to the environment by reducing the amount of urinary urea that is expelled onto the pasture. Not only would this result in less nitrogen being excreted onto the pastures, but it would also increase the ability of the pasture to absorb nitrogen because as the ground becomes less saturated, the plants and soil in the pasture can retain more nitrogen. A reduction in the amount of urea in the urine also results in less nitrous oxide emissions from the urine, reducing the production of a harmful greenhouse gas.

Collectively, the results from this study demonstrate that low MUN cows are a viable animal-based solution to reducing N losses from grazing based production systems to the environment. Breeding for lower MUN breeding values could greatly reduce the negative impact that cows are seen to have on the environment, allowing farmers to protect their livelihoods while ensuring that pastoral livestock production meets several of the United Nations sustainable development goals.

What would be your next step in confirming low MUN cows as a solution to mitigating the negative impacts of grazing production systems?

<> The next step is to further investigate the mechanisms that are causing these animals to have a reduction in milk urea nitrogen. Once we know what is making these cows perform differently we will be able to figure out how to best utilise them in a grazing setting to help further reduce the environmental impact from these systems. 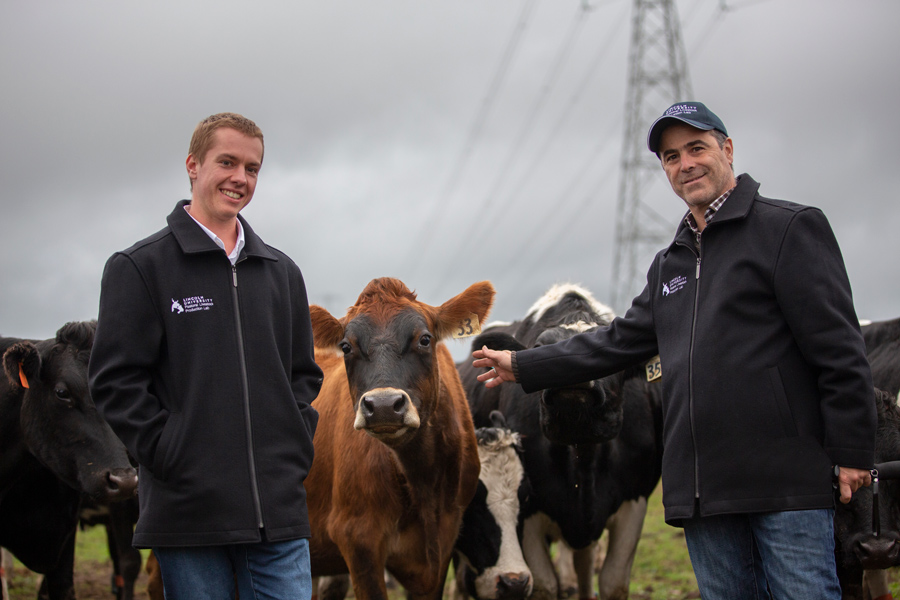 Professor Pablo Gregorini is Professor of Livestock Production at Lincoln University, Director of the Lincoln University Pastoral Livestock Production Lab and Head of the Centre of Excellence for Designing Future Productive Landscapes. Chair of the International Scientific Committee for the Nutrition of Herbivores, and member of the International Scientific Committee for farm systems design.