Biology
Street trees and other greenery counteract pollution and provide important ecosystem services in urban environments. That this valuable vegetation is under stress has emerged as a research and urbanisation issue. Pierre Vollenweider is based at the Swiss Federal Institute for Forest, Snow and Landscape Research which is concerned with the use, development and protection of natural and urban spaces. Together with Gunta Čekstere of the Institute of Biology, University of Latvia, Sergio Rasmann University of Neuchâtel, Switzerland, and other colleagues, the team examine the effect of winter application of de-icing salt on trees in temperate and northern cities.

Urban vegetation is limited in ecosystem size but still valuable for the many benefits to humans provided by a natural environment and by healthy ecosystems, known as ‘ecosystem services’. In an increasingly urbanised world, trees mitigate negative impact of climate extremes, such as summer heat in cities; and help to reduce air and noise pollution, and water run-off. They host birds, mammals and insects, slowing biodiversity losses and bringing wellbeing rewards of nature into otherwise artificial settings.

But urban environments are as stressful for plants as for other living beings. Cities are warming up at faster rates than are surrounding suburban and rural areas. The soil available for vegetation is often compacted with insufficient moisture and nutrients, and the surrounding air can be polluted. In addition, in cities where salt is spread to keep surfaces ice-free in winter the street trees, such as the well-loved ornamental Lime (Tilia spp.), show serious decline.

Safe pavement and road surfaces in winter are obtained at the cost of poor tree health and reduced environmental benefits from trees during the summer. Some tree species are more salt-tolerant than others, including ash, poplar or willow. But choice of urban trees also needs to account for other stress factors and important ecosystem services, for example for the cooling of hotter urban climate, for biodiversity maintenance, and for cultural preferences. Management of the green infrastructure of cities for the tolerance and resilience of trees should be part of the strategies to counteract climate change.

Environmental effects of de-icing salt
During the winter in countries having air temperature below 0oC, various materials are spread for de-icing, sodium chloride (NaCl) being most common. With snowmelt, runoff and plowing, salt ends up in urban soils near roads and pavements and can spread tens of metres away. In the soil, its accumulation destroys soil structure, degrades organic matter, increases pH, enhances nitrification level thus promoting leaching of nitrates and makes metal contaminants from roadsides more bioavailable. It can also reduce the availability of important nutrients to plants.

In cities where salt is spread to keep surfaces ice-free in winter the street trees show serious decline.

This winter-applied salt leaches into soils and is taken up in ionic form by surrounding vegetation during the subsequent growing season. When absorbed by roots and translocated into the whole tree, it can cause leaf necrosis in the short term and crown defoliation, twig dieback and tree death in the long term. Trees growing on salt-contaminated soils are often under osmotic and ionic stress. 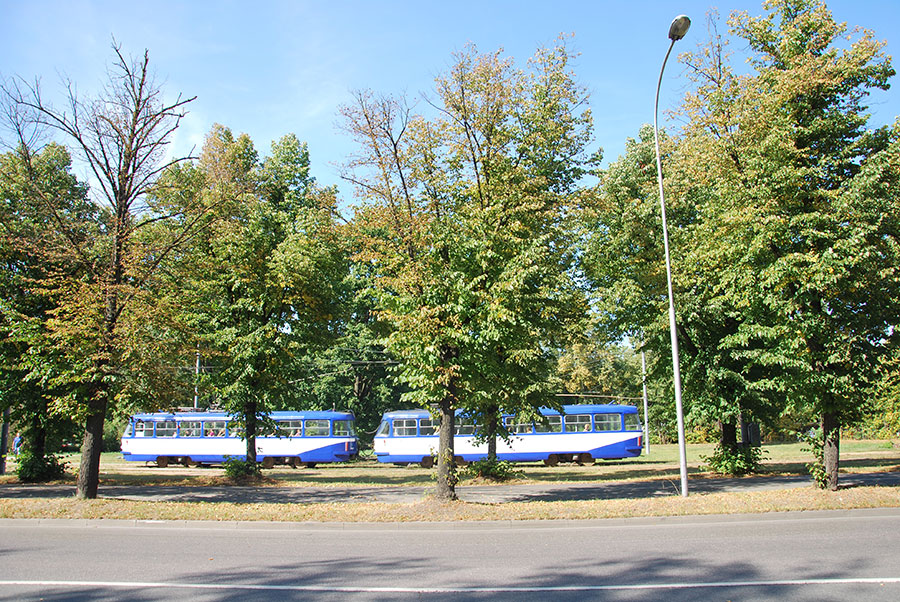 Through their research, Čekstere, Vollenweider, Rasmann and colleagues have demonstrated that: urban soil chemistry is altered by salt contamination; sensitive species of street trees can accumulate salt (sodium chloride, as separate Na and Cl ions) at over 1% of foliage dry mass; species and hybrids of the Lime trees they study have tolerance differences; and high salt concentrations in leaves alter arthropod communities in these trees. Gaining a better understanding of the injury and tolerance mechanisms of Lime in response to salt accumulation should help in selecting more resilient and sustainable cultivars to be planted in urban settings in the Northern Hemisphere.

The search for salt-tolerant species of street Lime
Common Lime (Tilia x vulgaris H.) is a popular frequently planted street tree in Riga, Latvia. However, since the 1960s, decline and mortality has led to increased felling and replacement with young trees. Na and Cl ions from de-icing salt are found to accumulate in leaves, causing necrosis that eventually seriously damages these trees. In comparisons with other central European species, T. cordata and T. platyphyllos, the researchers found that T. x vulgaris was the most tolerant. It had the least symptomatic leaves and best retained chlorophyll and water content.

Leaf samples of T. x vulgaris collected from salt uncontaminated and contaminated street sites in the centre of Riga, and from a control site at the National Botanical Garden, were evaluated for leaf necrosis and analysed for chemical element content. Even on dystrophic soil (having an imbalance of nutrient cations), the trees managed a sustained supply of most key nutrients. They were able to remediate essential nutrient deficiencies (nitrogen, sulphur, boron) or tolerate them (potassium, manganese), just as they do for contaminant metals (iron, copper). Mostly, it was the toxic accumulation of salt that caused the observed foliage damage.

But how does this salt contamination relate quantitatively to structural injury and the mechanisms of toxicity in foliage? During the growing season, salt ions leached into the ground by melting snow sludge are absorbed by urban tree roots and translocated into the foliage, where they accumulate. Assimilative cells try to remedy this by compartmentalising the ions in their central vacuoles, away from vital cell organelles in the surrounding cytoplasm. As a result, and for osmotic reasons, these cells are less able to release water and this hampers leaf gas exchanges, assimilation functions and the cooling of the atmosphere by tree transpiration.

The compartmentalisation of salt ions and associated stress defence and tolerance reactions of foliage material harvested from urban Lime trees was investigated using light and electron microscopy. Anatomical changes in the foliage, increasing in severity from leaf centre to necrotic leaf rim, were found in samples from salt-polluted versus unpolluted sites. In response to salt accumulation, the mesophyll (the part of a leaf between the two thin epidermis layers, containing the cells responsible for photosynthesis) in symptomatic leaves showed an increased turgescence (swelling) and there was evidence of disruption of cell compartments in samples showing the highest contamination.

Given their high mobility, the microlocalisation of Na and Cl ions within tissues and cells has been methodologically challenging to study. Examining the cross-section of samples “vitrified” after undergoing high pressure freezing fixation, the Na and Cl ions were clearly shown to be accumulated in the central vacuolar compartments. Not only was the vacuolar ionic content thus raised, but the amounts of essential nutrients such as potassium (K) and calcium were lowered, indicating salt (Na and Cl) accumulation within leaf cells at the expense of other essential chemical elements. Moreover, the degenerative changes observed in the assimilative cell organelles could be then attributed to indirect effects of salt.

Biodiversity impact of salt accumulation in Lime
The team also looked at the responses of Eucallipterus tiliae L. aphids in the canopy of Tilia x vulgaris to increased salt levels in foliage. They found that the injuries, anatomical adjustments and ecophysiological responses caused by salt stress in these trees, also affect the associated arthropod community. High salt content could mean that leaves become toxic or unpalatable to herbivores, and this is likely to affect the arthropods. Trees growing on salt-polluted sites had lower arthropod abundance but not lower diversity.

In comparing the otherwise similar salt unpolluted and polluted sites, the researchers found that leaves from salt-stressed trees contained less chlorophyll and probably less nitrogen (N). The diminished arthropod abundance could be partially explained by reduced N and water availability in the leaves of these trees. More vigorous trees—those that are least stressed—could be the most palatable to herbivores.

Rasmann, Vollenweider and Čekstere conclude that, the impacts of de-icing salts on lime trees have far-reaching effects through the trophic chain, weakening the associated arthropod communities. Hence, promoting more tolerant Lime trees is not only important with a view to healthy trees but also resilient associated biota and, further, sustainable urban biodiversity in the street greeneries at mid-latitudes.

Do you think that soil salinisation effects on the beneficial microbial communities in the rhizosphere could have a role here? What direction will your research now take?

<> The fundamental role of micro-organisms regarding tree nutrition has been recognised for a long time and is mediated by typical associations such as the ectomycorrhizas. Similar to trees in natural ecosystems, the microbial communities in anthropogenic soils – though the limited biological activity – should play fundamental roles regarding the tolerance and resilience of trees to the deleterious effects of salt contamination on soil properties. In our research, an indirect indication of their essential contribution was the mostly balanced nutrient content observed in foliage, despite the fully dystrophic soil conditions, knowing otherwise how limiting the poorly structured, compacted and debris-rich urban soils can be regarding root growth and soil exploration.

The findings reported here have contributed to mechanistic understanding of tree responses in the framework of long-term research effort at the University of Latvia on Riga’s street greeneries. Further research initiatives are foreseen on more applied aspects, evaluating the tolerance and resilience of different tree species and cultivars to salt pollution. In Switzerland and including salt, our current research has focused on other key stress factors which current impact on anthropized or natural ecosystems directly or indirectly results from ongoing global and climate change. They include the elevated tropospheric ozone concentrations, drought events increasing in frequency and severity or soil contamination by metal or other chemical elements. Regarding urban trees and their ecosystem services, my next research priority is about the ecophysiological performance of street greeneries with a view to urban cooling and the adaptations/adjustments to hotter city climate during summer. 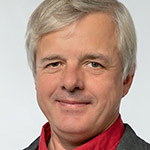 Dr Pierre Vollenweider’s research explores mechanistic responses of trees and vascular plants to environmental stress by means of adaptations in their morphology, tissue structure and physiology.