Physical Sciences
Catalysis, using reagents to speed up chemical reactions, is big business. From synthesising new chemicals to cleaning up the exhaust fumes from cars and sustainable energy devices such as hydrogen fuel cells, catalysts play a huge role in our daily lives. Prof Roy L. Johnston and Dr Francesca Baletto at the University of Birmingham and King’s College London respectively are using novel computational approaches not just to understand the intricate mechanisms of how such catalysts work but to use this knowledge to design new, more efficient nanocatalysts for particular applications.

There are many types of catalysts made up of a whole variety of different chemical elements. Some of the most commonly used elements are transition metals because they can interact with a wide variety of chemical species. These elements can also be arranged in a variety of ways to make catalysts with different shapes and structures, that can have a dramatic effect on their efficiency and properties.

As catalysts play a key role in processes such as the removal of toxic carbon monoxide from exhaust fumes, there is a huge need to develop new catalytic species that are efficient, robust and cost-effective. However, intelligently designing new catalysts or predicting which materials are likely to be successful in the lab relies on a deep understanding of the intricacies of catalytic mechanisms, another very challenging problem in itself. Prof Roy L. Johnston and Dr Francesca Baletto at the University of Birmingham and King’s College London, with their collaborators, are developing and applying computational techniques for exactly this problem, via the design and tailoring of nanomaterials for catalysis.

Catalysis bit by bit
Modelling catalytic materials computationally is no mean feat. While computational modelling can be used to predict the outcomes of simple gas phase chemical reactions very accurately, modelling solids, and particularly those with heavy atoms like metals, offers a number of additional challenges. Prof Johnston and Dr Baletto are also particularly interested in the properties of more unusual materials, known as nanoalloys, which have numerous desirable and enhanced catalytic properties. These nanoalloys are nanoparticles which are made up of two or more metallic elements.

Computational modelling of a catalytic reaction requires an understanding of the structure of the catalyst itself as well as any substrates it interacts with. The nanoalloys that Prof Johnston and Dr Baletto study are particularly complex as they come in a variety of sizes. This means that the computational models need to trial a huge number of different configurations and particle sizes to explore which combination of structural features will give rise to the most promising catalysts.

Despite the challenges in constructing accurate models, the advantage of the methods used by Prof Johnston and Dr Baletto is that the calculations provide a level of detail about the catalytic mechanism that it is simply not possible to capture in laboratory experiments. For example, it was experimentally known that the introduction of additional strain in the layers of atoms at the surface of the catalysts could result in different chemical properties to those of the unstrained surface of the same elements. However, the mechanism underpinning this observation was not understood until the corresponding computational modelling was performed.

Even greater levels of complexity are introduced into the computational models by potential transformations of the structure of the catalyst during a reaction event. While such changes in the shape of the catalyst may be rare events, it is necessary to account for these possibilities in the computational modelling to accurately reproduce experiments. As well as the development of new catalytic materials, this is also driving the development of new computational methods, as part of the TOUCAN project (‘Towards an Understanding of Catalysis on Nanoalloys’), a collaborative network of projects focused on understanding how nanoparticles and nanoalloys can speed up chemical reactions.

Greener energy
One of the key reasons that Prof Johnston and Dr Baletto are so interested in nanoalloys over traditional, substrate-supported monometallic catalysts is the potential impact they could have in the field of sustainable energy and clean technology. They have studied the impact of nanoalloys in the catalysis of a variety of reactions, including the oxygen reduction reaction (ORR), which is of importance in electrochemical fuel cells, and the oxidation of carbon monoxide (CO). As well as being a toxic pollutant, CO is one of the main poisons of fuel cell catalysts; it decreases the efficiency of the platinum electrodes, which are incredibly costly to replace due to the increasing scarcity of platinum.

Unfortunately, there are many existing catalysts for which platinum is an essential component and it has been challenging to find chemical elements that can act as a suitable replacement. However, platinum nanoalloys offer a route to making catalysts that are as efficient, but require much less platinum by replacing some of the platinum content with a cheaper metal. Prof Johnston and Dr Baletto have been modelling the effects of the amount of substitution in the nanoalloys, for a range of different metals, to see if they can identify which metals, and how much of each one, are required to design novel, highly efficient and selective catalysts for reactions such as CO2 capture and reduction, and O2 reduction.

The work of Prof Johnston and Dr Baletto is helping to provide an unparalleled insight into exactly how catalysts work, as well as leading the development of new, general computational approaches, that can be used to predict the properties of a variety of catalytic species. All of this is helping to drive ‘intelligent’ catalyst design. This will help identify and pre-screen species that are likely to be successful candidates, essential not just as a cost-saving exercise but to accelerate the development of a new generation of catalysts in clean technologies.

What do you think are some of the biggest unsolved problems in catalysis today?

Do you think nanocatalysts will be the dominant type of catalyst in the future?
<>Yes, since nanoparticles allow the tailoring of catalytic properties by changing the elemental composition and ordering, shape and morphology, which in turn tunes the electronic properties of the nanoparticle. The global market for nanocatalysts is continually expanding and this trend is forecast to continue for the near and medium-term future. Metallic, multimetallic (mixing precious and abundant metals) and hybrid (e.g., metal-metal oxide and metal-biomolecule) nanoparticles will play an increasingly important role, once the manufacture of highly efficient catalysts, controllable at the molecular scale, becomes feasible at a reasonable cost. The combination of numerical and experimental tools is mandatory to achieve the required control.

What do you think are some of the most exciting developments in catalysis that have arisen from using computational modelling in this area?
<>The most exciting idea is the growing idea that chemistry can be tuned by modifying nanoparticle shape, leading to a completely new approach to catalysis which is only feasible at the nanoscale. In this regard, a hot topic is the search for descriptors, which are measurable quantities that link nanoparticle shape and chemical composition to their catalytic activity and selectivity. Finding robust descriptors will open the possibility of developing a dynamical model for nanocatalysis, where the substrate is also mobile. Numerical tools have begun to be used to elucidate the role of the surrounding environment, at least as far as it stabilises particular shapes and chemical ordering of nanoparticles

What are the main challenges to be overcome for computational methods to achieve ‘chemical accuracy’ in describing catalytic processes?
<>

Do you think it will be possible to deduce general intuitive chemical models for catalyst design from your work?
<>Yes, the search for and definition of geometrical descriptors in conjunction with experimental data – e.g., electron microscopy – will open a new way to design nanocatalysts in an intuitive fashion. The use of machine learning is also likely to shed new insights on how catalytic activity depends on nanoparticle shape, size and chemical ordering, leading to new and fascinating routes for nanocatalyst design. Existing optimisation tools can be adapted to explore the pool of candidates which maximise/minimise the geometrical quantities of interest, eventually providing guidelines for the synthesis of these nanoparticles.

Designing catalysts bit by bit was last modified: May 11th, 2020 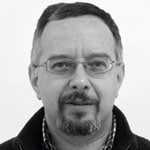 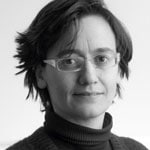 Roy Johnston is Professor of Computational Chemistry at the University of Birmingham, UK. He has published approximately 250 journal articles, reviews, books and book chapters.

Francesca Baletto is a Senior Lecturer in Physics at King’s College London, UK. She is authors of more than 45 journal articles, reviews, and book chapters.

Prof Johnston and Dr Baletto use computational techniques to design and tailor nanomaterials, focusing on nanoalloys and their catalytic properties.

Other PIs on the TOUCAN Project:
For external collaborators visit: