Health & Medicine
Anxiety disorders are one of the most common mental illnesses, and social isolation can be a major source of contributing stress. Medications to treat these disorders, such as benzodiazepines, are available; however, they come with a range of downsides. In a recent study in mice, Prof Jing Liang’s team at the USC School of Pharmacy in the US discovered that a chemical called dihydromyricetin could have potential as a new treatment for anxiety disorders.

Social isolation can be a cause of stress, as many of us can confirm from our experiences of living through lockdowns. In fact, there is an established link between an isolated living environment and experiencing mental illness. One of the most common types of mental illnesses are anxiety disorders. These include Generalised Anxiety Disorder (GAD), OCD, panic disorder, PTSD, and phobias. These can interfere with day-to-day life and cause distress in those who suffer from them. It is estimated that 3.1% of US adults have GAD, 8.7% have phobias, 1% have OCD, 3.5% have PTSD, and 2.7% have panic disorder.

What treatments are available for anxiety disorders?
As well as psychological treatment, medication is also available to treat anxiety disorders. Antidepressants can be prescribed, specifically selective serotonin reuptake inhibitors (SSRIs) or serotonin and noradrenaline reuptake inhibitors (SNRIs). However, these medications have side effects, including dizziness, insomnia, headaches, dry mouth, and for SSRIs, erectile dysfunction. In more severe cases of anxiety, benzodiazepines can be prescribed. Unfortunately, benzodiazepines come with some significant downsides. They often cause drowsiness and make it dangerous to consume alcohol. Benzodiazepines are also addictive and become less effective over time, so they are only suitable for short-term use.

In order to improve the treatment of anxiety disorders, it is vital that more effective medications with fewer side effects are developed for long-term use and treatment. Luckily, new research has suggested that a chemical called dihydromyricetin could be up to the task.


Dihydromyricetin, or DHM, is a bioflavonoid. Flavonoids are chemicals produced by the metabolism of plants, with a vast variety of functions. These functions include protecting plants from stress, as well as contributing to the smell and colour of fruit and flowers. As a natural flavonoid, DHM is produced in unique plant species, including the Japanese raisin tree (Hovenia dulcis) and Ampelopsis grossedentata. Both plants are used in East Asian traditional herbal teas and remedies, with many reported health benefits. Teas made from Ampelopsis grossedentata, known as vine tea or moyeam, are popular in China. It is said to help with hyperglycemia, hyperlipidemia, sore throats, and colds. In China, Japan, and Korea, the Japanese raisin tree is often used in traditional herbal medicine. It has been historically used as a laxative and treatment for parasitic infection. A more recent application for the use of DHM is counteracting the harmful effects of alcohol abuse, in which DHM is supplemented as a hangover cure with the ability to protect against liver diseases.


DHM treatment was shown to be anxiolytic, meaning that it reduced anxiety.

What research has revealed about DHM
Prof Jing Liang and her team at the USC School of Pharmacy conduct research on DHM, with results suggesting that it could have many useful applications in medicine. One paper published by the team showed that DHM counteracts the effects of alcohol. Within these investigations, it was identified that treating rats with DHM reduced alcohol consumption and intoxication, as well as withdrawal symptoms such as anxiety and seizure risk. Another study showed that DHM treatment could be an effective medication for Alzheimer’s disease. Mice with the disease treated with DHM were shown to have reduced memory loss, anxiety, seizure risk, and levels of peptides associated with Alzheimer’s. In both of these studies, DHM treatment was shown to be anxiolytic, meaning that it effectively reduced anxiety. 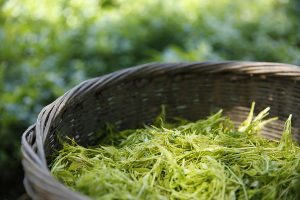 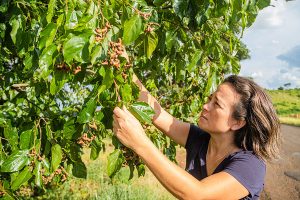 Dihydromyricetin is produced in unique plant species, including Ampelopsis grossedentata (top row) and the Japanese raisin tree (Hovenia dulcis, bottom row). Its functions include protecting these plants from stress, as well as contributing to the smell and colour of fruit and flowers.

In their most recent study, the researchers focused on this effect and set out to test how effective DHM treatment was at reducing anxiety caused by the chronic stress of social isolation. The effectiveness of DHM was also compared to diazepam, a commonly prescribed benzodiazepine. This was done by housing mice in social isolation for 2 or 4 weeks, followed by 2 weeks of treatment with DHM, diazepam, or placebo. The behaviour and brains of these mice were compared against each other, and a control group of mice that were housed in a group setting.

Mice housed in isolation with no treatment spent a lot less time in the open arms than their group-housed counterparts, indicating higher levels of anxiety. However, isolated mice administered DHM for 2 weeks showed significant improvements, with the 2-week isolated mice showing results similar to the group-housed mice. DHM had a little less effect on mice isolated for 4 weeks, perhaps due to the extended isolation inducing more severe anxiety. However, this was still more significant than the effect of diazepam treatment. These findings indicate that DHM helps to reduce anxious behaviour, more so than benzodiazepines.

Anxious behaviour was also assessed via an open field test. This assessment also tests for anxious aversion to open spaces, physical strength levels, as well as exploratory behaviour. Distances travelled by the mice were measured, with mice housed in isolation found to travel significantly less than their group-housed counterparts. Isolated mice treated with DHM travelled much more than mice with no treatment.

This finding indicates that DHM treatment restores the exploratory and motor activity that is otherwise reduced with high anxiety behaviour. Diazepam treatment actually lowered the distance travelled by the isolated mice. In the open field test, when mice spend more time in corners and are frozen in place, along with a lifted tail, these observations indicate higher anxiety levels in these animal models. These anxiety-like behaviours all increased in untreated isolated mice compared to the group-housed mice. Importantly, the isolated group treated with DHM showed a reduction in these behaviours. To further add to this evidence, it was also observed that isolation-induced anxiety also caused a reduction in the time mice spent rearing other mice and time spent in the center of the open field. Treatment with DHM was found to reverse this behavior, as isolated mice fed DHM showed an increase in these behaviours compared to untreated mice. In all of these tests, treatment with diazepam did not appear to help the measured anxious behaviours.

The effect of DHM treatment on signalling in the brain
The researchers tested the effect of DHM treatment on GABAergic neurotransmission. This is a type of signalling in the brain that involves the neurotransmitter GABA, which reduces neuronal excitability. Prior studies by Prof Liang’s team have indicated that DHM modulates GABA receptor function. GABA receptor-mediated currents in hippocampus cells were measured using picrotoxin, a central nervous system stimulant that interacts with GABA receptors. Compared to group-housed mice, 2-week isolated mice had much weaker currents. However, in the isolated mice treated with DHM, the currents were comparable to group-housed mice. This indicates that DHM treatment helps to increase the effect of GABA receptors, reducing the impairment of GABAergic transmission from social isolation.

DHM treatment helps to increase the effect of GABA receptors, reducing the impairment of GABAergic transmission from social isolation.

ATP levels in the hippocampus were also measured to assess whether they were affected by isolation-induced anxiety. ATP is the fuel source of the cell, and previous studies have shown that anxious rats have lower ATP levels in the brain. Isolated mice with no treatment had around a third less ATP in their hippocampus cells than group-housed mice. Treatment with DHM resulted in an increased level of ATP in the brains of isolated mice, whereas diazepam treatment had no effect.

The amount of gephyrin in the mouse brains was also tested. Gephyrin is a protein that helps with the programming and organisation (arrangement) of GABA receptors. The amount of gephyrin was observed to be 40% lower in mice that had been housed in isolation rather than in a group. However, isolated mice treated with DHM had normal levels of gephyrin. Treatment with diazepam did not have this effect. Results from other studies by Prof Liang’s team also support the conclusion that DHM treatment restores gephyrin levels in genetic Alzheimer’s mice.

What do these results mean?
This study shows that social isolation contributes to anxious behaviour and results in changes in GABAergic signalling in the brains of mice. The results show that treatment with DHM can help alleviate these changes caused by social isolation, more so than benzodiazepine treatment. The researchers also claim that the effect of DHM on GABAergic signalling could lead to long-term changes in the brain circuits associated with anxiety, as well as the demonstrated short-term alleviation of anxious behaviour. As a whole, this study highlights DHM as having potential to become an effective new treatment for anxiety disorders.

Based on these results, what future direction of research would best help us understand the anxiolytic properties of DHM?

<>Anxiety can be independent or contribute to developing other disorders, such as Alzheimer’s disease (AD). We started this study because more than 70% of AD patients have anxiety, and this is often the initial manifestation in early AD. If we can treat anxiety in the early stages of AD, we can potentially reduce the occurrence and development of AD. Based on the current results, DHM has the potential to be an effective new treatment for anxiety and even early AD. The next step is to now determine whether DHM has neuroprotective effects and how it is contributing to these benefits. 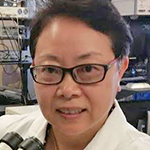 Dr Jing Liang, a professor at the USC School of Pharmacy, focuses her research on dihydromyricetin, a flavonoid with multiple pharmacological benefits, as a treatment for Alzheimer’s disease (AD). The theory established by Dr Liang is that impaired gephyrin-GABA pathway is an underlying mechanism and link between anxiety and AD.

Prof Liang and her team investigate the utility of dihydromyricetin (DHM) as a pharmacotherapy for anxiety disorders.

The researchers would like to acknowledge the USC School of Pharmacy and Carefree Biotechnology Foundation for their support. They would also like to give a special thanks to Dr Richard W. Olsen, a distinguished professor at the UCLA Department of Molecular and Medical Pharmacology, for his continued guidance and mentorship.