Physical Sciences
Materials used for aerospace applications have to be incredibly robust. For commercial airlines, the materials used to build the aircraft need to be capable of withstanding temperatures from -45 to 45 °C and windspeeds of over 400 kilometres per hour. All materials must undergo stringent testing, designed to replicate the real dynamic conditions encountered during use. Dr Meysam Rahmat, in his research at the Aerospace Research Centre of the National Research Council Canada, works on designing new tests to more accurately measure and test the types of dynamic forces such materials experience during use to better understand their behaviour and properties.

Aerospace materials are some of the most stringently tested materials on earth. They have to be capable of withstanding a wide range of environmental conditions, such as temperature and pressure, while retaining their desired properties. While durability of such materials is mandatory, it is even more important that failures of the material are easily, and sufficiently early, identified. The ultimate objective is to prevent accidents such as the China Airlines Flight 611 crash, where metal fatigue led to the deaths of 225 people.

Being able to detect impending failure of materials requires a comprehensive knowledge of the material’s behaviour. To do so, these materials are studied using a variety of lab-based testing techniques, alongside numerical simulations, in an effort to predict how the material behaves close to the failure point.

For such testing and modelling to be useful for aerospace materials, they must effectively mimic the types of forces the material would experience when in use. For example, the metals used for aeroplane wings are tested in the lab once they are made into wings by bending them and applying stress and strain to the materials on a variety of testing rigs. Through repeated testing and modelling, a comprehensive understanding of the metal behaviour can be achieved to identify what early warning signs can be used for in-situ testing once the aeroplane is in use.

Exclusively using static tests cannot provide a good model for many of the rapidly changing forces that aeroplanes experience while in use.

Many of the existing tests look at applying static forces to the material. This is where the load applied to the material is essentially constant over a given time and would be a good way of modelling, for example, the constant force that the weight of the seats has on the plane’s structure. However, static stress tests cannot provide a good model for many of the rapidly changing forces that aeroplanes experience while in use.

To investigate how a material reacts when a force is suddenly applied, dynamic testing is used instead. Dr Meysam Rahmat at the Aerospace Research Centre of the National Research Council Canada has been pioneering new testing methods that focus on the effects of dynamical stress on aerospace materials, which has revealed very different results to static, or quasi-static (where the force is applied over a longer period of time than it would be for a dynamic test), with important implications for aircraft safety.

Stressful measurements
To perform the dynamic strain tests, Dr Rahmat uses a servo-hydraulic load frame. Such frames can be customised for different types and magnitudes of load. For Dr Rahmat’s dynamic tests, he uses a load frame specifically designed to achieve high speeds. The frame can reach speeds of up to eight metres per second as it suddenly applies load to the stationary sample, resulting in the sudden transfer of force. A series of sensors measure local deformation in different locations on the sample to obtain ‘stress’ (a measure of force acting on the sample that can lead to deformation) and ‘strain’ (a measure of deformation in the material due to the force that can lead to cracking).

One common issue with these types of dynamic stress measurements is that the values measured by the load cell oscillate during the measurement, making it difficult to extract the true stress-strain values experienced by the sample. Some preventive actions, such as using lightweight clamps and optimising the mounting position of the gauges, can be carried out to minimise these oscillations. Part of Dr Rahmat’s work has been to carefully investigate how changing testing parameters such as sample geometry affects the final values obtained for the material properties to ensure their accuracy and whether these corrections to minimise the oscillations are applicable to different materials.

The information obtained from such tests is highly valuable not just for understanding material behaviour but also from a design perspective.

Stress fractures
One of the first materials Dr Rahmat has investigated using his approach is an aluminium dogbone structure, named for its resemblance to the shape of a dog bone. This is a typical shape for a tensile test sample as the narrow section in the middle is subject to the majority of the deformation. This is important for ease of testing: if the stresses were concentrated near the sides of the sample, where it is clamped to the testing machine, this would lead to artificial readings as the clamping of the sample would interfere with the measurement. This is also beneficial for measuring elongation, as it means the measured change in length of the material comes exclusively from the material, not also from changes in the clamps.

During these dynamic measurements, what Dr Rahmat found was that for this well-studied aluminium sample, there was a large deviation for the ultimate strength and the elongation at failure between the values measured dynamically versus quasi-static measurement. This is important for not just making sure the testing of materials is realistic for what it will ultimately experience in the field, but also refining the modelling of the responses of such materials to the anticipated stress and strain.

Optical microscope images of the tested material also showed differences in the type of fractures the material experienced, depending on whether it had received the force very suddenly or gradually over a longer period. While small changes in the surface structure of the metal that can only be observed by a microscope might seem trivial, this indicates differences in the amount of energy absorption by the aluminium depending on the speed of the force, showing the material would have different resistances to different types of loading conditions.

Metals to nanocomposites
All of this testing and model refinement has ultimately enhanced our understanding of very well-studied materials, but Dr Rahmat has been expanding this to nanocomposites as well. Nanocomposites are novel and complex materials composed of different nanoscale materials and have not been well-studied using dynamic strain methods. By testing a nanocomposite formed of a common epoxy, with and without boron nitride nanotubes, Dr Rahmat and his team were able to see how the inclusion of the nanotubes added greater elasticity and tensile strength to the sample but had little influence on the shear properties of the epoxy.

The information obtained from such tests is highly valuable not just for understanding material behaviour but also from a design perspective, as it becomes possible to determine which mixtures have the most desirable properties. The methods Dr Rahmat has been developing are also very generalisable to a wide range of substances, which he will continue to explore in his future work.

What types of material do you want to explore next with this testing method?

What is the most satisfying aspect of your work in this field? 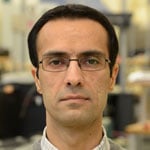