Health & Medicine
Opioids are currently the mainstay treatment for the 25 million people suffering from daily pain in the United States. Prescription opioids have led to lethal overdoses and contributed in part to the five-fold increase in opioid-related deaths from 1999 to 2016. Investigators at Syntrix Pharmaceuticals (Auburn, Washington State) have developed desmetramadol, a new and improved low-lethality opioid to help tackle the opioid crisis.

In the United States 25 million people suffer from daily pain. Currently, opioids are the mainstay treatment for these patients. But opioids are highly addictive, and can lead to misuse and lethal overdose. There are an estimated 20,500 deaths involving prescription opioids per year due to overdose in the United States. If illicit opioids are included, like heroin and fentanyl, deaths due to any opioid rise to about 40,000 per year in the United States. The American situation has reached a crisis point with the cost and scale of the crisis growing across the country. With their new low lethality pain drug, Syntrix Pharmaceuticals hopes to provide one needed component in a broad effort to tackle the opioid crisis.
<> 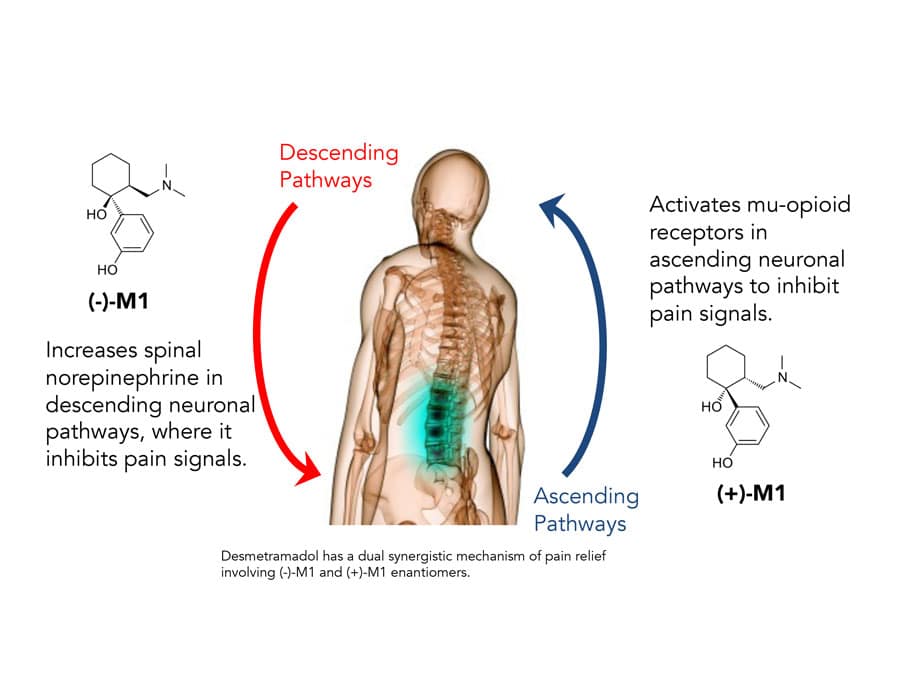 Crisis point
The number of opioid-related overdoses continues to rise with deaths doubling in the past ten years and quadrupling over the past sixteen years, the Centers for Disease Control and Prevention (CDC) found in a recent report. In 2016, the economic cost of the opioid epidemic in Washington State was calculated at over $9.19 billion, with three-quarters of the cost, or $7.18 billion attributed to fatalities. The economic and social impacts of the crisis demand immediate action. Replacing the supply of available prescription opioids with a low-lethality alternative would be predicted to have a significant impact on fatalities, which is the major economic and social impact driver of the crisis.

The problem with opioids
Opioids are a group of drugs used to treat pain. Some are derived from molecules obtained from the poppy plant, and others like fentanyl are obtained purely by chemical synthesis. They bind to receptors in the body called opioid receptors. These are found in the brain and spinal cord, and when bound by opioids help to suppress pain. When used for pain relief, many people will develop a tolerance to opioids: they gradually need to take more in order to achieve the same pain-relieving effect. The problem with opioids is that the same receptor that controls pain transmission also controls the drive to breathe. In an overdose, the opioid drug binds to a specific type of opioid receptor (the mu-opioid receptor) in the medulla of the brain that causes slow and ineffective breathing or ‘respiratory depression’. Untreated respiratory depression can in turn lead to death. 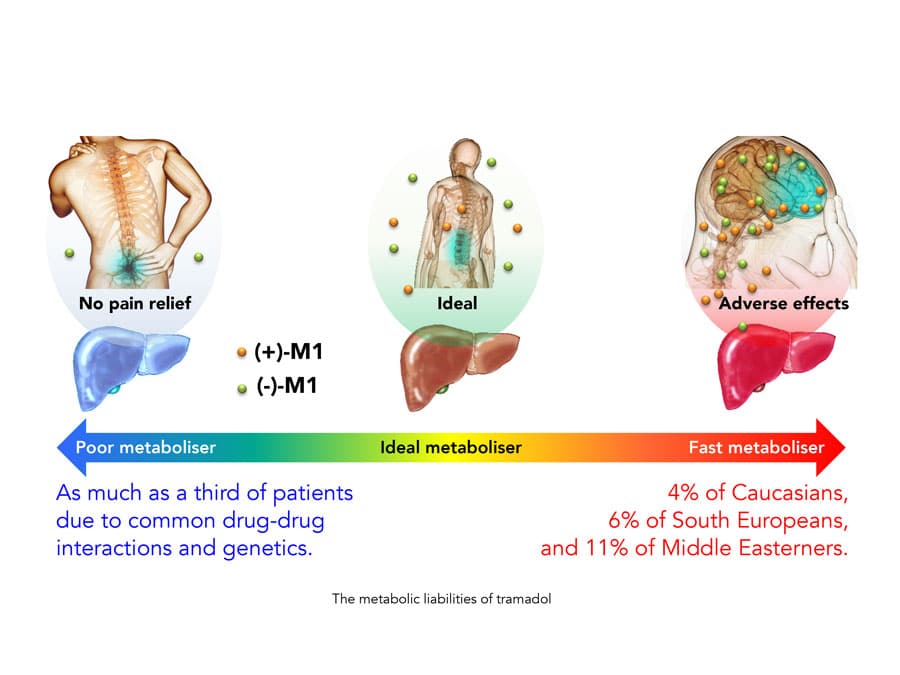 Opioids are so potentially dangerous that the United States lists certain of them under the Controlled Substances Act. There are five categories, schedule I – V, schedule I having the most severe potential for abuse, through to schedule V with the lowest. Schedule I drugs are further distinguished from schedule II to V drugs as having no currently accepted medical use (e.g., heroin, LSD). There are currently 170 million prescriptions for schedule II opioids per year in the United States. Each of these prescriptions has a high potential to be abused, and it is believed millions of people are at risk of or already suffering from opioid addiction and abuse.

There are an estimated 20,500 prescription opioid deaths per year due to overdose in the United States.

The US government desperately wants to reduce the costs associated with opioid-related fatalities. This year the United States Congress identified research and development as an integral part of the response to this crisis. They recognised that the complexity of this evolving situation requires new discoveries and improvements to existing approaches, from the biology of addiction to overdose prevention and on a bipartisan basis quickly passed the Substance Use-Disorder Prevention that Promotes Opioid Recovery and Treatment, or SUPPORT Act. The SUPPORT Act was signed into law by President Trump on October 24, 2018.

The CDC has recommended reducing the dose of schedule II opioids in patients to reduce opioid-related overdosing and fatalities – but patients still require effective pain relief. Other than the dangerous schedule II opioids, there are very few safer and less abuse-prone options for doctors to prescribe. Syntrix Pharmaceuticals has been working on a solution. They have a strategy to reduce fatalities associated with prescription opioids whilst providing effective pain relief for patients. The inspiration for their new drug came from tramadol.

Tramadol: The pros and cons of a popular pain drug
Tramadol is an opioid approved in the United States for the treatment of moderate to moderately severe pain. It is classified as a schedule IV drug, so it is less prone to abuse than schedule II opioids and is safer. It is also more difficult to overdose on tramadol than schedule II opioids. A lethal overdose of tramadol is in excess of 5 grams, or 100 tablets of tramadol in its typical 50 mg tablet strength. Compare this to fentanyl, a schedule II opioid, for which a lethal dose is 0.002 grams, an amount so small it appears no bigger than half a sesame seed. In other words, the lethal dose of fentanyl is 2,500 times less that of tramadol. Overdoses on tramadol alone are a rarity and therefore it has become popular with physicians as a safer pain medication. In the United States, it is the second most commonly prescribed pain relief with 41 million prescriptions dispensed in 2017. Tramadol sounds like a superhero amid the opioid crisis, but like any superhero it has its shortcomings.

Tramadol is a complex drug. It must be broken down in the body into a metabolite called M1 and it is this metabolite that provides pain relief for the patient. Tramadol is broken down into M1 by an enzyme in the body called CYP2D6. The amount of this enzyme activity can vary from patient to patient, ranging from too much to too little. And here lies the problem. If a patient has lots of the enzyme CYP2D6 they are known as an ultra-metaboliser: they make lots of M1, potentially reaching dangerous levels in the body.

It seems like tramadol isn’t a perfect low-lethality opioid solution to the opioid crisis, but it has provided an excellent starting point for Syntrix Pharmaceuticals. Learning lessons from tramadol, Syntrix has developed a new medication to tackle the opioid crisis, desmetramadol, that is predicted to have the safety features of tramadol without its metabolic liabilities.

Move over tramadol: Syntrix develops desmetramadol
With generous grant support from the National Institute on Drug Abuse, Syntrix developed desmetramadol. Desmetramadol delivers tramadol’s active metabolite M1, but unlike tramadol, it doesn’t have to be broken down in the body. Syntrix hopes that desmetramadol will be the first opioid with the low-lethality safety profile of tramadol but without its metabolic liabilities. Stuart Kahn, MD, Syntrix Medical Director, stated, “Due to the metabolic limitations of tramadol, large numbers of pain patients have not been receiving adequate relief on tramadol. Often, they find relief only from dangerous schedule II opiates. The side effects and risks those patients face include dependency and death. Desmetramadol has the potential to provide effective pain relief to these patients with greater safety.”

In a recently completed clinical trial, Syntrix hopes to show that desmetramadol provides the safety and pain relief of tramadol without its metabolic issues. Sixty participants were recruited for the study and they were all administered a CYP2D6 inhibitor. Subjects were then randomly allocated to receive desmetramadol, tramadol and placebo, with each treatment separated by two weeks. The researchers hypothesise that tramadol will lose its pain relief and act like a placebo, whereas desmetramadol will provide pain relief superior to tramadol. The outcome cannot be predicted in advance since the behaviour of tramadol in the human body is complex. If successful, Syntrix believes that desmetramadol could generally replace tramadol globally, and that many of the 170 million schedule II prescriptions in the United States that contribute to the opioid crisis could be replaced by desmetramadol.

John Zebala, MD, PhD, President and CEO said, “With desmetramadol broadly increasing the utility of tramadol and enhancing its safety, we expect to further accelerate the shift away from schedule II opioids.” The final stage of clinical trials is planned for desmetramadol in 2019 to 2020, and it is hoped that Food and Drug Administration approval will be obtained in 2020 to 2021.

Do you think pain relief without opioids will ever be possible?
<>I certainly hope so. The most ideal pain medicine would presumably be one that was safe and free of any abuse potential. However, large pharmaceutical companies have been looking for non-opioid pain medicines for the last half-century with many failures. They have yet to find anything more effective for pain than the opioids. Opioids have a well-established mechanistic role in pain and so developing a low-lethality variant made sense to us as a strategy to address the opioid crisis with a safer medicine that would have a high likelihood of being highly effective in treating pain.

What first inspired you to work in this area?
<>When I was a young MD-PhD student in New York in the early 1990s, I had just started a clinical rotation at the Memorial Sloan-Kettering Cancer Center and was taking care of a patient with terminal breast cancer. She was in severe pain due to metastases to her bones. Her opioid prescription was so large it would have instantly killed a normal person. The pharmacy at Sloan-Kettering was the only pharmacy in the city that could fill it. It was at that time that I decided I was going to pursue a career developing new therapeutics to broadly help many patients, rather than become a practising physician seeing one patient at a time. It probably also explains why Syntrix’s current drug pipeline is focused on drugs that treat pain and cancer. Pain is still the #1 reason people see a doctor. Finding better ways to treat it is critical.

Executive Office of the President of the United States. Heath Research and Development to Stem the Opioid Crisis: A Federal Roadmap. A report by the Fast-Track Action Committee (FTAC) on Health Science and Technology Response to the Opioid Crisis convened under the National Science & Technology Council of the Committee on Science. October 2018. SBIR Phase 2b Research Proposal – Syntrix research proposal to National Institute on Drug Abuse grant DA027304. 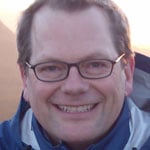 Dr Zebala is the Syntrix President and CEO. During his 10+ year tenure with the company, Dr Zebala established company direction and brought company drug assets from discovery through Phase 1 and Phase 2 clinical trials. Dr Zebala is the Principal Investigator on over $20 million in NIH grants to the company. He is an inventor on over 20 issued US patents, and author to more than 25 peer-reviewed scientific articles. Dr Zebala received his MD and PhD from Cornell Medical School. Dr Zebala has served as an invited reviewer on NIH study sections and review groups concerning drug development and therapeutics.