Physical Sciences
Neutrinos are elusive, strange particles that are produced in the nuclear reactions that power stars. As such, the study of neutrinos from the Sun gives us a window directly into the Sun’s core, as well as telling us more about these fundamental particles. However, neutrinos are notoriously hard to detect, so detectors like the Super-Kamiokande and Homestake solar neutrino experiments give vital data for scientists in this area. Professor Hans J Haubold, of the UN Office for Outer Space Affairs, and his colleagues, are drawing on and developing multiple fields, from quantum mechanics through to astrophysics and mathematics, to help us better understand solar neutrinos.

Physics is a subject that spans the very largest and smallest scales, and the study of solar neutrinos is one aspect of physics which aids our understanding of nature ranging from tiny particles to gargantuan stars. Neutrinos are a fundamental particle, being one of 15 such particles that form the Standard Model of particle physics. Vast quantities of neutrinos are produced in nuclear reactions in the core of our Sun, and stream out from the Sun as light does from its surface. As such, by studying solar neutrinos, we are able to learn more about these tiny particles, and about the fusion processes that power stars and shape the cosmos.

Neutrinos interact very weakly with other matter, so neutrinos produced in the core of the Sun can easily pass straight through its outer layers, giving us a window directly into the core. On the other hand, when we study the Sun by looking at the light from its surface, we cannot directly see beyond its opaque outer layer. Indeed, the analysis of neutrinos from the Sun has helped scientists to identify which fusion reactions are dominant in the core. 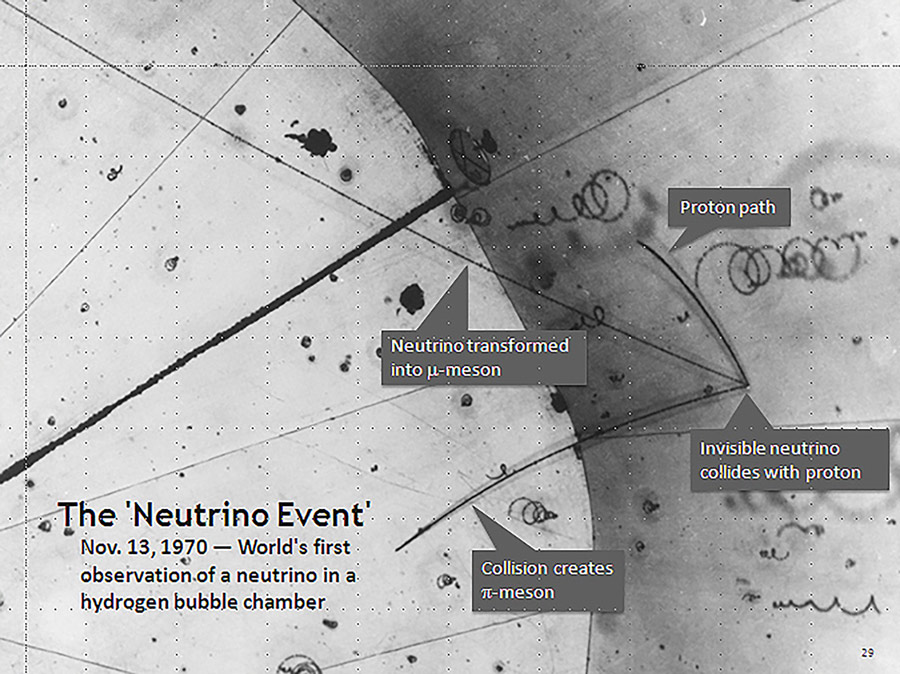 However, the weak interaction of neutrinos also means that most of the neutrinos that reach the Earth will pass straight through completely unaffected; indeed, we all have billions of solar neutrinos passing through us each second with no discernible effect. This is unfortunately also the case for any neutrino detectors that we build, so it is exceedingly difficult to measure and study neutrinos.

One prominent neutrino detector is the Super-Kamiokande experiment, which is situated deep underneath a mountain in Japan and uses a large tank holding around 50,000 tonnes of water to catch neutrinos. A rare interaction between a neutrino and a water molecule can produce a flash of Cherenkov light (a by-product of the neutrino’s interaction decelerating through the water and shedding energy as light) which can be picked up by detectors that line the inside walls of the water tank. This flash can reveal some information about the neutrino, such as its energy and the direction it came from.

Neutrinos may be a quantum superposition of all three types of themselves, and when one reacts, only one of these possibilities is expressed.

Hans J Haubold, at the UN Office for Outer Space Affairs, and colleagues, have worked on analysing data from such detectors to relate the data to theories about neutrinos and about nuclear fusion. The study of solar neutrinos is relatively new in physics, and there are multiple active fields of development. For example, some analysis indicates that the number of neutrinos produced by the Sun may vary periodically with time, while other analysis finds no evidence for these patterns. Resolving this mystery remains an open question. Haubold and colleagues are looking to further our understanding of the Sun and of neutrinos, utilising diverse ideas from across different fields, such as entanglement from quantum physics, entropy from thermodynamics, and fractional calculus from pure mathematics.

Entanglement
One of the earliest developments and major discoveries in the study of solar neutrinos was the solving of the so-called Solar Neutrino Problem, arising from measurements from the 1960s ‘Homestake’ experiment run by Davis and Bahcall. This experiment only detected around a third of the number of neutrinos from the Sun than was expected by the contemporary understanding of particle physics and of fusion in the Sun’s core, implying that either the experimental results or the theories under investigation were wrong.

Decades later it was discovered that, in fact, neutrinos can exist in three types (corresponding to the electron, muon and tau particles – three other particles that form part of the Standard Model), and the experiment was only able to detect one type of these three. A strange characteristic of neutrinos was also discovered – a neutrino is able to mutate between these three types, and some neutrinos were doing so while in transit between the Sun and the detector.

Although to a large extent these revelations about neutrinos solved the Solar Neutrino Problem, the way that neutrinos mutate between states is not fully understood and observations do not fully match up with theory.

A possible explanation for this behaviour is that a neutrino exists as a quantum superposition of all three possible types of itself, and when it interacts with another particle only one of these three possibilities will be expressed. That is, the three possible states of a neutrino may be entangled, entanglement being a phenomenon seen in quantum mechanics where multiple different particles are seen to exert a strong effect on one another. This self-interference between a neutrino’s possible states may help to match observations of neutrinos with our theories.

Entropy
Entropy is a physical concept that has its origins in a time when physicists became interested in understanding the bulk behaviour of particles in a gas (for example, the temperature or pressure of the gas). Entropy can be thought of as a measure of how well-dispersed the energy of a system is, or how many different ways you could rearrange the system with it still retaining the same overall properties on a macro-scale (eg, the fibres in a ball of cotton can be rearranged in a multitude of ways without the cotton ball changing its overall properties, so it has high entropy, while the strands in a spider web must be arranged in a precise way for the web to hold its shape and serve its purpose, so it has low entropy).The idea that total entropy always increases in a physical process is fundamental in physics, and a decrease in total entropy has never been observed experimentally or in nature.

The concept of entropy is being applied to solar neutrinos in two ways. There is entanglement entropy, which describes how entangled particles behave. There is also diffusion entropy analysis, which has been applied by Arak M Mathai, informed by statistics developed by Constantino Tsallis, to process data from Super Kamiokande. Including entropy is an important source of progress in this field, and allows the researchers to move their models incrementally closer to matching what is seen in real-world observations.

Fractional calculus
It is common for developments in physics to spur on parallel progress in mathematics. Newton’s research on mechanics and gravity necessitated the development of calculus, while the emergence of quantum mechanics saw the well-developed mathematical ideas of linear algebra applied to physical systems. In the case of solar neutrinos, Haubold, Mathai and colleagues’ analysis of data from Super Kamiokande using diffusion entropy analysis has led to developments in an area of maths known as fractional calculus.

This combination of quantum mechanics, classical thermodynamics and modern astro- and particle physics has led to multiple fruitful avenues of research.

In simple terms, calculus is the mathematical study of how certain variables change with respect to each other (for example, one can use calculus to relate an object’s speed and acceleration to each other). Fractional calculus is a physically unintuitive extension of this form of maths, that, if applied to something like speed and acceleration, would give you functions for physically non-existent properties between speed and acceleration. As such, fractional calculus has not been commonly used in physics, but in recent years more and more applications are being found. This has been used to explore the statistics of particles in the neutrino-producing cores of the stars.

The cores of stars are hellish places, with particles whizzing around at mind-bending speeds, constantly slamming into each other and exchanging energy and momentum. However, even in these conditions, the majority of collisions are not energetic enough to lead to a fusion reaction between nuclei. When these particles are considered in bulk, the distribution of speeds at which the particles are moving can be described mathematically by a probability density function (PDF). The PDF for particles in the core of the sun is believed to be close to a Maxwell-Boltzmann distribution, where the bulk of the particles occupy the lower end of the scale with a narrow ‘tail’ representing those particles at higher speeds. This tail-end of the distribution is responsible for the very high-energy collisions that lead to fusion and produce neutrinos. However, the tail is highly sensitive to changes in the maths of the model, so subtle changes in a model have a strong impact on what we would expect to see from neutrino detectors.

The study of solar neutrinos is relatively young in physics, and has to grapple with the difficulties of detecting these elusive particles, the strange nature of them, as well as the complexity of the processes in which they are produced. This combination of quantum mechanics, classical thermodynamics and modern astro- and particle physics has led to multiple fruitful avenues of research helping our understanding, opening a window into the core of our local star and sharpening the mathematical tools used in physics.

Neutrinos have been suggested as potential candidates to make up some of the dark matter present in the universe. Do you believe that this is a realistic possibility?

Years of conflicting neutrino measurements have led astronomers, physicists, and mathematicians/statisticians to propose a ‘dark sector’ of invisible particles, one that could simultaneously explain dark matter, the expansion of the universe, and other mysteries. This dark sector of invisible particles would have complicated interrelationships resembling those of electrons, quarks, and other particles of the Standard Model. The first step to explore the dark sector would be the explanation of the puzzling small masses of the three known neutrinos in terms of physics and mathematics. 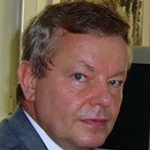 Hans J Haubold is pursuing research on neutrino astrophysics and special functions of mathematical physics in cooperation with AM Mathai.

In cooperation with his NASA colleagues BJ Thompson, N Gopalswamy, and JM Davila, Haubold organised the International Heliophysical Year (IHY) 2007. The United Nations Report for the IHY 2007 was published by Springer, Vienna and New York 2009.

Professor Hans J Haubold and his research team draw on diverse fields including quantum mechanics and mathematics in order to research solar neutrinos.