Engineering & Technology
With millions of people in the world still having no access to electricity, it is easy to predict that the world’s already challenging energy demands will only increase. Solar power has long presented itself as a promising renewable energy source, but the solar cells used in photovoltaics still suffer from relatively low efficiency, even when novel materials such as perovskites are employed. Dr Akrajas Ali Umar, of the Universiti Kebangsaan Malaysia, and Professor Yiqiang Zhan of Fudan University, China, have reported on an atoms-thick material that can complement common interface issues in the electron transport material of perovskites solar cells, leading to a photoelectrical dynamic uplift that improves their performance and stability.

Electricity is a basic requirement for lighting our homes and to power heating, water extraction systems, and the many other small appliances that are essential to raise people above the poverty line. Yet the United Nations (UN) estimates that there are still 789 million people around the world with no access to electricity. While it is crucial to make electricity available and accessible to everyone, the energy sector is the largest contributor to the greenhouse gas emissions responsible for climate change. From the carbon dioxide resulting from burning fossil fuels to the methane released by extracting and burning natural gas, our need for energy is at the heart of a warming planet. It is critical, therefore, that our efforts towards zero energy poverty are driven by sustainable and environmentally friendly technologies, a statement that forms the basis of goal number 7 of the UN’s 17 sustainable development goals.

Solar power is a promising option in our quest to find more sustainable sources of energy. Every second, the Sun provides enough power to fuel two hours of the Earth’s energy demands at current usage levels. In addition, 20% of the global population live in 70 countries that have high potential for harnessing solar power, and some of them could do so without experiencing any seasonal drops in output. It has been estimated that, with proper investment in the necessary technology, solar power could generate 30–50% of the world’s total electricity needs.

The solar challenge
Historically, the problem with harvesting the immense power of the Sun for generating electricity has been the cost and relative inefficiency of solar power technology. Even though the amount of power collected globally from solar energy increased more than 300-fold between 2000 to 2019, the efficiency of photovoltaics – how much sunlight can effectively be turned into electricity – remains a challenge for the continued growth of solar power.

Traditionally, the solar cells needed to convert sunlight into electricity were made of crystalline structures of silicon, achieving efficiencies between 20 and 25%. When silicon is combined with other semiconductor materials, creating what is called a multi-junction solar cell, this efficiency can be increased to approximately 30%. But this is still relatively low, and achieving the enormous potential of solar power will require new efforts towards improving the performance of solar cells. As such, further advances in solar power technology will necessarily include finding new materials that can be used in high efficiency solar cells.

It has been estimated that, with proper investment, solar power could generate 30-50% of the total electricity required globally.

Perovskite growth and promise
In the search for new solar cell materials, perovskites have had significant research attention since their first successful incorporation into a solar cell in 2009. Specifically, a perovskite is a calcium titanium oxide mineral, but other materials with similar structures are also referred to as perovskites. The perovskite materials most commonly employed in solar cells are hybrid lead or tin halide-based materials which tend to be both cheap to produce and simple to manufacture. Having started with an efficiency of less than 4% when they were first invented, perovskite solar cells can now achieve efficiencies of 25% on their own or 30% when combined with silicon in multi-junction solar cells. In addition, the photoelectrical properties of perovskites are easily adjustable by carefully selecting the metals that compose their crystalline structures. 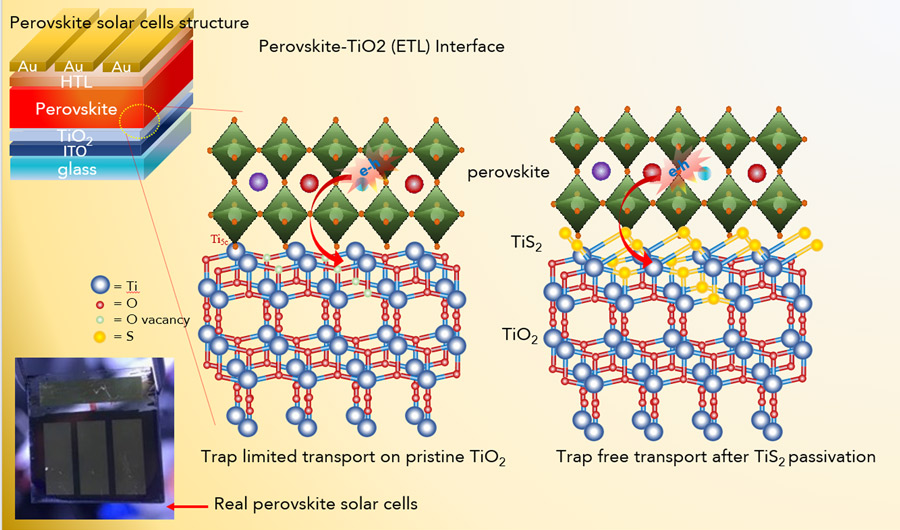 Fix the interface, enhance performance
Dr Akrajas Ali Umar of the Universiti Kebangsaan Malaysia, and Professor Yiqiang Zhan of Fudan University in China, have recently reported on the enhancement of the photoelectrical dynamic of perovskite solar cells by passivation of their titanium dioxide (TiO2) electron transport layer. The researchers used an atomically thin two-dimensional (2D) layer of titanium sulphide (TiS2) as a passivation material, and found that the sulphur (S) atoms appropriately filled the oxygen (O) vacancies in the electron transport layer, therefore leading to efficient passivation. In addition, the conduction band of TiS2 is similar in energy to that of TiO2, which leads to a better coupling between the two materials. These ideal photoelectrical properties of TiS2 were found to enable effortless photogenerated electron transfer at the interface between the perovskite and the electron transport layer, improving the open-circuit voltage and ultimately leading to more efficient perovskite solar cells.

Uplift in photoelectrical dynamics
Notably, the researchers discovered that the 2D TiS2 passivation layer increased the charge extracted from the perovskite to the electron transport layer, and charge transportation from perovskite to the cathode, by ten times. It also boosted the carrier mobility in the solar cell by a factor of 1000, as well as increasing the cell’s stability. Devices containing solar cells with this new material were also found to retain 97.4% performance during long periods of continuous operation under solar irradiation.

The researchers believe that this technique – applying only an atoms-thick layer of a passivation material carefully selected to match core perovskite energy levels – could lead to a significant improvement in the efficiency of solar cells. Further optimisation of the passivation material, in particular with respect to the composition and structure of its crystal matrix, could further improve the efficiencies seen in this study. This is the focus of the research team’s current work and they expect to report on further improvements in later publications.

How do you hope your work will contribute to the availability of electricity worldwide?

<>
Our finding is expected to solve the deficiency in the photocarrier dynamic at the interface between electron transport layer and perovskite because of defects. Defects passivation will generate facile carrier dynamic at the interface, improving the performance and the stability of the perovskite solar cells. This is expected to accelerate the real application of the perovskite solar cells to contribute to the availability of electricity worldwide. 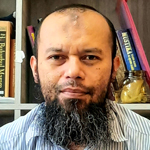 Dr Akrajas Ali Umar gained his PhD in Physics from Universiti Kebangsaan Malaysia in 2004. He is currently Associate Professor in the Institute of Microengineering and Nanoelectronics (IMEN), Universiti Kebangsaan Malaysia since 2011. His research interests are the physics and chemistry of nanomaterials with the emphasis on energy conversion application 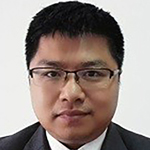 Professor Dr Yiqiang Zhan obtained his PhD in Condensed Matter Physics in 2005 from Fudan University, Shanghai, P.R. China, where is currently based. His research focuses on the realisation of high-performance and high stability perovskite solar cells by interface and structural effect control of the photoactive component in solar cells.

The physics and chemistry of nanomaterials and their applications for energy conversion.