Education & Training
Anna Sfard is a Professor Emerita at the University of Haifa, Israel. In her role as a learning scientist, she investigates relations between thinking and communication. Linking learning with the notion of identity, her work has already provided several innovative acumens including understanding how identities encompass culture in learning processes; the identification of emotions as a principal factor responsible for the success, or failure, of a learning process; and identifying how learning influences identities and is shaped by them in return. Professor Sfard’s insights point towards new concepts in teaching and learning, some of which are incongruous with current intuitional practices.

Human learning is influenced by many factors, but what part does the individual learner’s identity play? Anna Sfard, Professor Emerita at the University of Haifa, Israel, believes that the answer to this question could revolutionise what we know about how people learn.

Research into learning has traditionally focused on aspects of cognition and emotion. Social factors have also been receiving recognition of late. Each of these foci has prompted the emergence of an individual field of study, each producing its autonomous account, or story, of human learning. Thus far researchers have not been able to combine these accounts and explain how they interact within the process of learning. Professor Sfard’s investigation into the relationship between thinking and communication has revealed that this failure is probably due to each story being told in a different ‘language’. Sfard, together with her colleagues and students, divulges that this is where the notion of identity enters learning sciences in order to fuse these different accounts into one complete story.

Identity
Professor Sfard defines identity as a set of stories about a person that are reifying (saying what a person is and has rather than what he/she does), significant (believed to be the person’s defining features) and endorsable by the author (a good reflection of how things “really are,” and thus a reliable guide to the person’s future actions). Our identity is underpinned by our inclusion in various communities and exclusion from others, together with how we perform within those communities that we are associated with.

Storytelling
It has been recognised that storytelling is one of our foremost ways of giving meaning to our experiences. In other words, stories are our sense-making devices. When phenomena are narrated, it’s the story that makes them understandable. (In this research, story and narrative are tantamount). The story means we don’t have to memorise everything as recalling one element of the narrative will prompt recollections of others.

Professor Sfard views school-type learning and identity-building as interwoven instances of storytelling. Where the learning of science or history involves developing the ability to tell stories about specific components of reality, identity refers to particular kinds of stories about people.

Identity and learning mathematics
Learning mathematics involves more than developing the ability to tell stories about mathematical objects. How a student copes or struggles with the task of learning mathematics at least partly depends on factors outside of their individual characteristics. Yet, until recently, researchers either pursued the cognitive aspect or the emotional option, but not both. Likewise, learning evidently occurs among people, but research has reported learners assuming almost exclusive responsibility for their success or failure. Those researchers interested in cognition and those involved with emotion practised separate specialised discourses, as did those concerned with either the individual or collective participation.

Research carried out by Professor Sfard, her students, Dr Anna Prusak and Dr Heyd-Metzuyanim, and their colleagues at the Discourse Group of the University of Haifa demonstrates how identity challenges this compartmentalisation, drawing together these parts and uniting them into a single story. The stories that constitute identity are told in a discourse that makes it possible to encompass the social, individual, cognitive and emotional facets of learning.

Empirical study
Observing a group of 7th graders dealing with a new mathematical problem involving fractions supported the researchers’ assumptions that learning mathematics is an interaction of mathematizing (talking about the mathematical objects) and identifying (talking about the participants of the discourse). Lessons were observed once a week for a period of five months. The lessons were recorded on video that captured all participants’ faces, and the recordings transcribed.

Observations
Analysing these data, the researchers examined the interpersonal and emotional relationships within the group in order to gain an understanding of the learning mechanisms being employed. This particular case revealed that in addition to a student’s mathematical confidence and level of mathematical activity within the lesson, the way in which the student chose to participate in the mathematical discourse was also affected by whether the actions performed by her and others in the group were in keeping with her self-told identity, the identities she assigned to others, and the identities that others assigned to her.

Discourse of identity allows investigating the interplay of the social, individual, cognitive and emotional facets of learning.

This study also shed light on why students would often choose to learn from their less able peers rather than from a more competent classmate. In this study, the identity of discourse leader was not given to one of the students who could solve the problem. In fact, this group of students put more energy into identity struggles than in mathematizing, and the issue of leadership was debatable.

Furthermore, the researchers found that teacher’s actions, while well intended, can damage the learning process by prompting non-productive identifying interactions. These may account for students’ failing to learn and fuel some learners’ belief that they are either mathematically or socially ‘incapable’. Moreover, this particular study revealed that the emotionally charged act of identifying can get in the way of a student benefitting from what appears to be an auspicious learning opportunity.

Identity work and learning
Identity depends on how an individual categorises or judges themselves and how others judge them. These judgements are volatile as they are generated and regenerated in relationships between people. Professor Sfard observes that identity work and learning can be considered different parts of one process. It follows that building our mathematical identity means developing our individual way of participating in the discourse of mathematics. Likewise, for educators, becoming a good teacher is synonymous with learning how to engage in particular kinds of professional practices. Sfard postulates that the stories we tell about ourselves, together with those that others tell about us, influence our learning and in return our learning influences stories about us. Thus, our learning of, say, mathematics, and our identity building shape each other.

Commognition
Exploring the relationship between thinking and communication has led Professor Sfard to develop the theory of commognition. This blend of communication and cognition defines a theory that regards thinking as a form of internal communication. This communication is multimodal, almost never in words only. Sometimes, it is entirely non-verbal. Sfard developed the notion of commognition within the context of mathematics education as a response to weaknesses she observed in the traditional views of human development. One particular weakness of the ‘acquisitionist’ interpretation of learning as a process of acquiring concepts and knowledge was that it focused solely on the individual. In result, acquisitionist researchers failed to account for historical changes in human ways of acting. The acquisitionist viewpoint was later opposed by the ‘participationist’ view that in the learning processes that are unique to humans, the learner becomes an increasingly skilful participant in well-defined forms of historically established activity. This perspective took a further step when different domains of human knowing, including mathematics, were recognised as discursive activities. This latter notion underpins the commognitive vision of learning. Mathematics is a historically established discourse, so learning mathematics entails getting an access to this particular form of communication. The basic assumption that deems thinking to be a form of communicating has multiple implications that merge into this comprehensive nondualist theory of learning – commognition.

Discussion
Professor Sfard’s perspective opens new directions for research into teaching and learning. Linking learning and identity, together with commognition, have relevance and impact which could stretch well beyond the practice of learning and teaching mathematics. Her work has already provided several innovative acumens including understanding how identities encompass culture in learning processes; the identification of emotions as a principal factor responsible for the success, or failure, of a learning process; and identifying how learning influences identities and is shaped by them in return. Professor Sfard’s insights point towards new concepts in teaching and learning, some of which are incongruous with current intuitional practices.

What initially prompted your research into the relationship between thinking and communication?

<>Ever since my PhD, perhaps even earlier, I have been pondering about the exact meaning of the focal notions of my research: mathematics, learning, thinking. The incessant attempt at defining, resulting in a long chain of proposals and their subsequent revisions, has been propelled by my awareness of the pervasive ambiguity surrounding these keywords. In a situation like this, researchers’ stories can be easily misinterpreted and thus cannot be trusted. The idea that thinking may be usefully operationalised as self-communication has been inspired by the work of the Russian psychologist Lev S. Vygotsky and the Austrian-English philosopher Ludwig Wittgenstein.

<>Recently, the focus of my research moved to routines and especially, to rituals, which constitute a subtype of routine. Since learning may be described as a successive routinisation of our actions, research on discursive routines and on how they develop from initial rituals may be expected to bring about a better grasp of the mechanisms of learning. I also intend to examine the hypothesis that these are discourses and our discursive learning that underlie the uniquely human phenomenon of an incessant historical change in ways of living and acting. I wish to engage with the claim that discourses constitute repositories of the constantly growing complexity of our actions.

Human learning: A story of identity and communication was last modified: November 7th, 2019 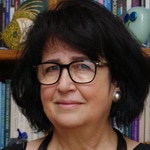 Anna Sfard is a Professor Emerita at the University of Haifa, Israel. As a learning scientist, she investigates relations between thinking and communication. She is the recipient of 2007 Freudenthal Award, the Fellow of American Educational Research Association (AERA) and the member of the American National Academy of Education (NAEd).

Professor Sfard’s research explores the domain of learning sciences, with a special focus on the relation between thinking and communication. Her aim is to improve our understanding of human development, particularly the growth of mathematical thinking.