Many dogs with behavioral problems are surrendered to shelters each year and are at risk of euthanasia. The Center for Canine Behavior Studies (CCBS) works with dog owners and canine professionals to gain a better understanding of canine behavior issues and the techniques that work best for treating these issues. This information is used to educate dog owners, veterinarians, and other professionals, with the aim of facilitating a harmonious relationship between dogs and their owners.

In the USA, more than three million dogs end up in shelters each year. Of these, one in five will be euthanised. Behavioral problems are the most common reason for owners surrendering their dogs to shelters. However, a better understanding of the genetic and environmental factors that can contribute to the development of these behavioral issues could help to solve this issue.

The Center for Canine Behavior Studies (CCBS) is a non-profit organization dedicated to canine behavior research. The center helps to educate owners to better understand their dogs, providing information about what is – and what is not – normal behavior, as well as the most effective ways of addressing common issues, such as aggression or separation anxiety. Nicholas Dodman, Co-Founder, CEO and President of CCBS explains, ‘CCBS strives to be the premier resource for dog owners when their dog misbehaves. We pride ourselves on educating owners to better understand and interact with man’s best friend’.

CCBS conducts its research through carefully crafted electronically distributed surveys to its ‘citizen scientists,’ dog owners and professionals. The study findings are put into practice; they are used to help owners, trainers, and veterinarians improve their understanding of canine behavior, as well as identify the strategies that best provide long-term solutions for behavioral issues. Ultimately, CCBS aims to help dog owners have a more harmonious relationship with their dogs, offering all dogs the best chance of a forever home.

When owners become frustrated with unwanted behaviors in their dogs, they are more likely to surrender the animal, and, currently, a high number of dogs with behavioral issues are euthanised. Moreover, behavioral problems are a source of poor welfare in companion dogs, impacting not only the dog and owner, but also the professionals who work with dogs.

This is why, through its studies, CCBS is dedicated to finding solutions for canine behavior problems. Such solutions will reduce surrender, allowing dogs to remain in their owners’ homes as valued members of the family. The findings from CCBS surveys have established the importance of guiding the decision-making of new owners after acquiring a dog, allowing them to plan better and manage the expectations they have for their new companion. This will prevent the development of unwanted behaviors and improve the bond between human and dog.

In surveys investigating owner personality traits and training methods in relation to canine behavior problems, the CCBS researchers found that the tendency of dogs to display behavioral problems was associated with their owners’ use of aversive or confrontational training methods; the prevalence and severity of canine behavior problems increased with these methods. Such methods were associated with aggression, anxiety, reduced ability to learn, and reduced willingness to interact with strangers. 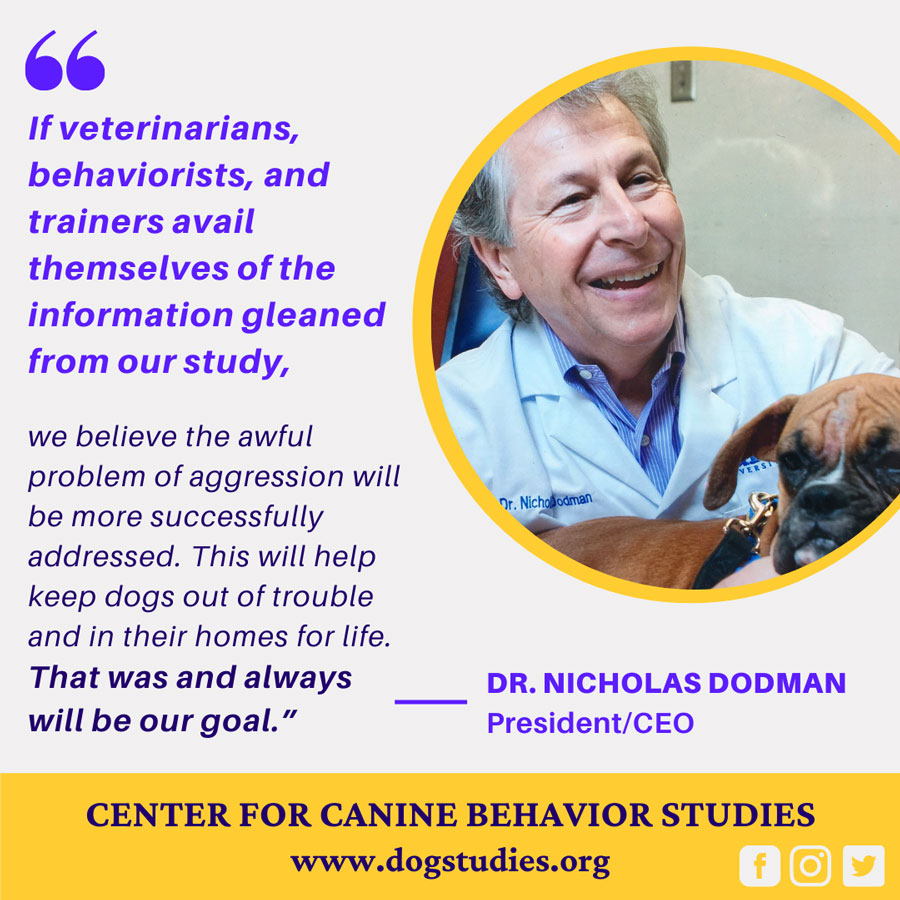 An owner’s personality traits often influence how they interact with their dogs. Moreover, interaction style has a direct influence on a dog’s ability to learn and their likelihood of displaying undesirable behaviors. As a result, the researchers were able to confirm that the relationship between owner personality and companion dog behavior is driven by the style of the owners’ interactions with their dog.

Fear- and anxiety-based behavior problems are the most prevalent among companion dogs, followed by aggression-based problems. In a CCBS survey investigating the effectiveness of various professionals and behavior modification programs, the majority of owners found professional advice useful in treating their dog’s aggression. Moreover, seeking advice from a trainer, behavior consultant, or veterinarian was associated with an increased probability of improving behavioral issues.

In just over one fifth of cases (22%), dogs were brought to a veterinarian in relation to their behavior issue. Of these, 15% were found to have a relevant underlying medical issue, the most common being pain, seizure, thyroid problems, or cognitive dysfunction. This finding indicates that all dogs with behavioral problems should have their medical needs assessed before proceeding with retraining techniques, as these could prove to be a contributing factor.

In another study, CCBS found that several behavior modification techniques are beneficial for treating fear and aggression. These include improved communication between dog and owner, habituation, frequent short training sessions, and participation in dog sports. Positive reinforcement was associated with a reduced likelihood of aggressive behavior and owners who employed best training practices for managing behavior were able to establish more positive relationships with their dog. In contrast, using punishment in response to undesirable behaviors, while sometimes ceasing the behavior in that moment, is not an effective long-term solution and can actually worsen fear and aggression. It is important to note that an estimated 51 percent of all dog bites resulting from canine aggressiveness are to children who are often at face level with the dog. This potentially preventable situation can be life-altering for the child and the dog, making proper management and control of dogs and children equally important.

Puppy training and socialization is effective in reducing behavioral problems later in life. It also provides early exposure to environmental stimuli and various cues, making it less likely that the puppy will develop a fear of these stimuli, thus improving future learning and behavioral outcomes. In a study investigating the impact of preadolescent training, the CCBS researchers found that employing puppy training in the first six months is associated with a lower likelihood of dogs displaying aggression, compulsive behavior, excessive barking, or destructive behavior as adults. Moreover, puppy training classes with a qualified professional identify problematic behaviors while the dog is still young, allowing early intervention.

Based on owners’ survey responses, the older a dog was, the less likely they were to have previously attended puppy training sessions. This indicates a growing awareness regarding the benefits of puppy training and an increasing availability of classes.

CCBS: Improving the lives of dogs and those who love them

It is helpful to know the overall prevalence of behavior problems. The data from CCBS surveys can guide canine professionals and direct their attention to the magnitude of the problems that dog owners face. With this information, trainers and veterinarians can incorporate appropriate behavior problem management into their work, which would support the dog–owner partnership and, in time, reduce the number of dogs surrendered to shelters and euthanized each year.

Improving the welfare of dogs through behavior management likewise improves the health and wellbeing of their owners. The results of CCBS’ studies will facilitate the development of future treatments for canine aggression and canine anxiety by providing trainers and behavior consultants with the necessary guidance, ensuring better welfare for companion dogs.

How can owners and canine professionals get involved with CCBS’ research?

Go to the website dogstudies.org. There you will find CCBS’ home page. Scroll down that page and there is a heading ‘Join the CCBS Community.’ Click on the button that says, ‘Become a Friend’. There you will find a sign-up box that says ‘Join our Research Community’ asking for your name and email. Membership is free. That’s all it takes. We promise not to overload you with emails, but will from time to time ask you to volunteer to answer some questions via online study questionnaires. We will also end you a quarterly newsletter to inform you about our current activities, and more. You can unsubscribe at any time. 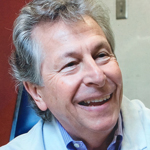 The Center for Canine Behavior Science (CCBS) is a research organization that has been in operation for seven years. Its mission is to ensure a harmonious relationship between dogs and their owners. Taking a citizen science approach, CCBS conducts research through questionnaires sent to their dog-owning membership.

The Center for Canine Behavior Studies (CCBS) is a not-for-profit 501c3 company that undertakes canine behavior research to benefit both owners and their dogs. 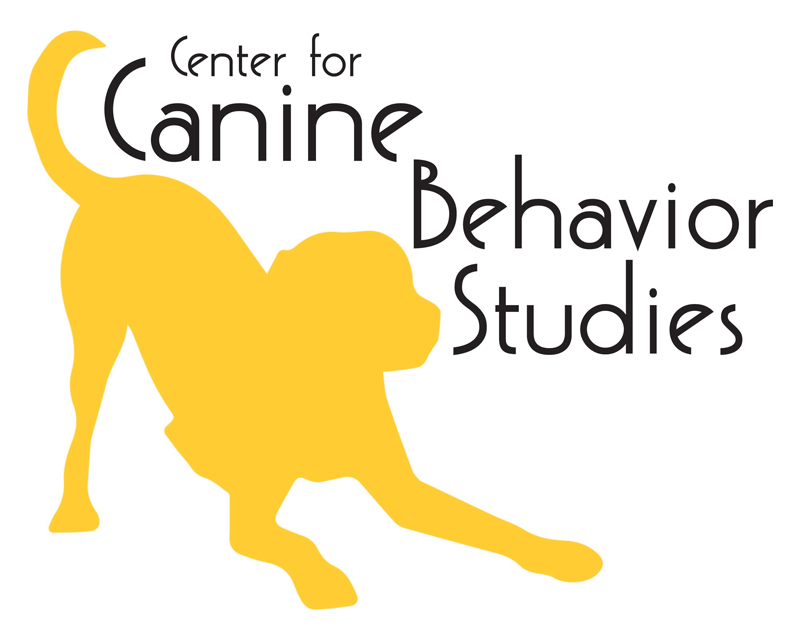