Arts & Humanities
Suzanne Anker is an artist and theorist from New York City, chair of the School of Visual Arts’ Fine Arts Department. She is also founder and director of the School’s Bio Art Laboratory, a state-of-the-art facility which gives artists a place to bring together scientific and artistic methods to create a dialogue concerning the current state of nature and science. In this article we delve into the world of Bio Art, find out what it is, what it means and how it might contribute to solving some of biological science’s 21st-century challenges.

What do you get if you combine art with the biological sciences? What happens if you let loose an artist in a scientific laboratory? The answer to these questions could be ‘Bio Art’. Bio artists use artistic methods to describe, explore or critique science and scientific practices in addition to using living materials as their media. Bio Art itself is a hybrid practice that generates knowledge through the artist’s experimental procedures.

Bio Art is not media-specific, and broadly speaking encompasses three genres. Some bio artists embrace the iconography of 20th- and 21st-century sciences, using traditional media (painting, sculpture, printmaking, drawing, performance art) to communicate novel ideas; others use computer software, systems theory and simulations to explore science through digital media, film and video; and others use biological materials and wetware practices as their medium, including tissue engineering, plant breeding, transgenics and ecological reclamation.

Suzanne Anker, chair of the School of Visual Arts (SVA) Fine Arts Department in New York, is a visual artist and theorist who works at this intersection of art and biological science. She uses botanical specimens, medical museum artifacts, laboratory apparatus, microscopic images and geological specimens to investigate the way nature is being changed in the 21st century.

Bio Art is inspired and informed by the cultural, ethical and philosophical implications of biological science
and research.

Art and science meet
Bio Art is inspired and informed by the cultural, ethical and philosophical implications of the biological sciences and its attendant research. As the role of science has increased in significance for people around the world over the last two centuries, so has interest in art that explores and expands on its discoveries for the general population. Science and scientific findings are usually expressed in a numerical format, accessible only to the educated few in that specific field, or at best condensed into pithy but sensational newspaper stories. Bio Art provides a window into the secret – and perhaps equally revered and feared – laboratory.

In 2021, news headlines around the world have been dominated more than ever before by matters of biological disaster – the COVID-19 pandemic, the climate crisis and species extinction to name a few. Could Bio Art help the public to understand and engage with these issues in a more transparent way? Might it act as a force for healing, bringing to our attention the century’s positive scientific achievements? Could Bio Art’s ‘citizen science’ projects provide new opportunities for community education outside institutional frameworks? Might such hybrid practices lead to the development of scientific ideas and innovation itself? Anker believes it can be all these things.

Epistemic things
Anker’s recent theoretical work has explored how art and science are inherently and inseparably related. She notes that innovation in both fields is often necessarily accompanied by an awareness that factors can and do arise by accident or randomly: and in both fields, tools are invented to facilitate unique working methods. Anker is interested in these tools or ‘epistemic things’ as objects of investigation which generate knowledge in experimental systems. She cites as examples electrophoresis and polymerase chain reaction – techniques that have revolutionised genetic research and become the gold standard for DNA replication. Scientific discovery relies on the development of such tools that go on to generate innovation. This in turn becomes part of the Bio Art trajectory; the tools are part of the data, creating new organisms, models and information, and they consequently converge with Bio Art practices.

Anker also points out the significant role images play in biology, as well as their ability to capture the collective imagination. They are part of the epistemic process that leads to scientific discovery: a good example is Rosalind Franklin’s famous ‘Photo 51’, the key image of DNA’s double helix which led to an accurate understanding of its molecular structure. Anker also cites the example of crystallographer Dr Helen Megaw’s work to acknowledge the cultural manifestation of novel scientific methodologies. Megaw was a central figure in a group made up of textile manufacturers and crystallographers who created prints revealing the properties of insulin, haemoglobin and china clay.

The Bio Art Lab
Anker is founder and director of the SVA’s Bio Art Laboratory; a facility where ‘scientific tools and techniques become tools and techniques in art practice’. The lab gives students access to equipment such as a bioprinter, microscopes, incubators, vortex mixers and more, as well as housing skeletons, a specimen and slide collection, a herbarium, aquarium and library.

Some particularly culturally significant examples of Bio Art that have come out of Anker’s Laboratory include Astroculture, a sculptural installation akin to an indoor garden or terrarium, in which vegetables and herbs grow in metal cubes complete with individual LED panels. Anker herself notes how the artwork demonstrates optimal environmental conditions for the plants and opens up a discussion about NASA’s research into agriculture in anti-gravity conditions and the immense pressure on plant life here on Earth as a result of climate change and the death of pollinators. Could this installation contribute to the invention of the new and robust growing techniques that are now needed to ensure a stable supply of plants for both food and medicine?

Myotomato (2016) was a project consisting of wet lab practices, constructed models, video, photography and recipes, and derived from the concept of a variety of tomato named ‘beefsteak’ (known for their large size and good taste). The Bio Art venture engaged in genetic engineering of the tomato’s genome with myoglobin, with the intention of increasing the quantity of protein in the fruit. The myoglobin was found to be present in the newly grown plants, though without further botanical expertise it was not possible to determine which parts of the plant carried the protein. Despite its limitations, however, Myotomato clearly feeds into the critical discussion on how low-carbon, protein-rich foods could enable us to reduce the meat production that contributes so much to many countries’ carbon footprints. Could such a technique be used to cultivate seeds for plants that could solve malnutrition in poverty-stricken or climate-change affected parts of the world?

The artwork opens up a discussion about NASA’s research into agriculture in anti- gravity conditions.

Anker herself has recently re-released her photographic series Vanitas (in a Petri dish) as household objects. Presented as coasters, these colourful and vivid expressions of life and death show flowers, insects and fruit vanishing over time – a simple warning of the delicacy of life and the way the elements of the Earth transform. They encourage us to take a moment to contemplate our own mortality as did the Dutch still life painters of the 18th century, whose work this series updates for the 21st century. 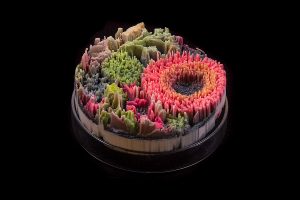 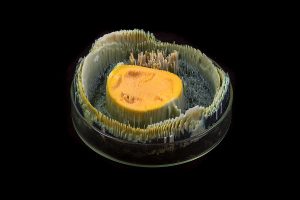 Altering nature
Our societies and culture are already undergoing seismic shifts as a result of the industrial and technological revolutions, scientific and medical advancements, and collapsing ecosystems. Bio Art is increasingly relevant as a way of enabling and encouraging discussion of how nature is being changed in the Anthropocene – an informal name given to the most recent geological period in which humans have begun to make significant changes to Earth’s climate and environment.

Projects from the Bio Art Lab, as well as Anker’s own work, demonstrate that such art not only starts conversations, brings better understanding of science to the public and captures the cultural imagination, but also actively contributes to research and research methods in the biological sciences. Art and science have a special relationship: their union can produce questions, answers and innovations that can change the future.

What ideas and processes are behind Vanitas (in a Petri dish)?

<>
My Vanitas (in a Petri dish) series speak to the flux of life and the regenerative powers of nature in a precarious time. In transforming my art into a utilitarian object, my goal is to share this work with a wider audience, by bringing attention to the urgent ecological dilemmas of our time. 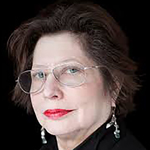 Suzanne Anker is a visual artist and theorist working at the intersection of art and the biological sciences. Concerned with genetics, climate change, species extinction and toxic degradation, she calls attention to the beauty of life and the ‘necessity for enlightened thinking about nature’s “tangled bank”’.

Suzanne uses visual art to investigate the ways in which nature is being altered in the 21st century.