Physical Sciences
For nearly a century, physicists have struggled to understand why the universe contains so much more matter than antimatter. In a new experiment, Dr Marco Giammarchi and colleagues at the QUPLAS collaboration have demonstrated a technique which could help in their search for an answer. For the first time, the team have demonstrated interferometry with a single antiparticle – an effect which could soon enable physicists to probe the properties of antimatter in far greater detail than ever before.

In 1928, British physicist Paul Dirac made a strange discovery. As he aimed to derive an equation which could unify the laws of quantum mechanics and special relativity, his calculations revealed the need for an entirely new family of particles. For the laws of physics to hold up in many quantum-scale interactions, the properties of each particle in this family must exactly mirror those of their already known counterparts: for example, the counterpart of electron must have exactly the same mass, but an exactly opposite positive charge. Moreover, if one of these particles ever meets its counterpart, the pair must annihilate each other immediately.

Named ‘antimatter’, these particles were soon discovered through observations of real effects, including high-energy streams of charged particles named cosmic rays. Today, antiparticles can be found in situations ranging from medical equipment to the products of energetic collisions in particle accelerators. However, the nature of antimatter also presents physicists with a problem: according to Dirac’s equations, particles and antiparticles should have been generated at equal quantities during the Big Bang. Strangely, this certainly doesn’t seem to be the case.

“In our current understanding of the universe, matter vastly predominates over its counterpart: antimatter”, explains Dr Giammarchi, who works at Italy’s National Institute for Nuclear Physics (INFN) in Milan. “According to our most advanced fundamental theories, matter and antimatter are linked by fundamental symmetries. The asymmetry between matter and antimatter in our universe is one of the major unexplained mysteries of physics.”

The scarcity of antimatter is a major barrier in resolving this mystery. So far, physicists have only managed to confine minuscule numbers of antiparticles in the lab, making the substance incredibly difficult to study. In their research, Dr Giammarchi and his team aimed to provide new ways to resolve this long-standing mystery, by exploiting another strange effect in quantum mechanics.

According to Dirac’s equations, particles and antiparticles should have been generated at equal quantities during the Big Bang. Strangely, this doesn’t seem to be the case.

Wave-particle duality
The physical properties of waves can be easily observed on macroscopic scales, whether they are ocean waves entering a harbour or points of varying loudness at a concert. For example, wave fronts will diffract when passing through a narrow gap, and spread outwards from their point of emergence. In addition, waves will interfere with each other when they meet: either constructively if their points of highest and lowest amplitude align with each other; or destructively if they are misaligned.

Five years before Dirac, French physicist Louis de Broglie hypothesised that the same could remarkably be true of particles. In contrast to Newton’s centuries-old classical descriptions, he theorised that through the laws of quantum mechanics, particles could diffract and interfere just like waves: an effect which was experimentally demonstrated just a few years later. Named ‘wave-particle duality’, the effect has now been experimentally observed in a wide variety of particles: from neutrons and electrons, to large, complex molecules.

“According to this principle, quantum particles made of matter show diffraction, interference and other properties that are typical of waves,” describes Dr Giammarchi. “In addition, these wavelike properties of particles manifest themselves even when a single particle is propagating. In his Lectures, Richard Feynman considered this fact to be the ‘earth of the quantum mystery.’”

Within the wider scope of these studies, one specific experiment has observed a particularly strange effect: under the right conditions, waves of matter can essentially interfere with themselves. To capture the process, researchers can apply a widely used piece of apparatus named an ‘interferometer’. Often used to study waves in classical scenarios, these instruments have more recently been adapted to study interference in matter waves.

Self-interfering particles
The first key element of the type of interferometer used to capture this effect is a periodic arrangement of closely spaced narrow gaps, named a diffraction grating. When waves from a single source pass through these gaps, multiple diffracted waves will emerge, and interfere with each other in characteristic ways. If a screen is positioned at some distance from the grating, the patterns generated by this interference can be observed directly – appearing as periodic patterns of high and low intensity, named ‘fringes’. Moreover, the spacings between fringes show a direct relationship with the wavelengths of the diffracted waves.

For particles, interference patterns are generated in a somewhat different way. Instead of intensity, the amplitudes of particle waves relate to the probability that a particle will be found in a certain place when measured by an observer. This means that when observed on a screen, individual particles will only appear as single points at first, conveying very little information. However, if the experiment is repeated many times, interference patterns will begin to build up; with higher observation frequencies bearing analogy to higher wave intensities in conventional interference patterns. Within these patterns, fringes appear as periodic arrangements of higher and lower observation frequencies, whose spacings are related to the wavelength of the particles.

Currently, the best electron sources available can produce beams at rates of roughly one quadrillion electrons per second, enabling researchers to build up interference patterns extremely quickly. In contrast, however, even the most advanced sources of positrons – the antimatter counterparts to electrons – can only generate around 10,000 of the antiparticles per second, making their beams some 11 orders of magnitude less intense. So far, this scarcity has meant that interferometry has never been achieved with antiparticles. If this challenge were addressed, reliable positron interference patterns would be a crucial tool for researchers trying to understand the ever-elusive nature of antimatter.

Antiparticle interference
In their research, Dr Giammarchi and his colleagues at the QUPLAS collaboration aimed to generate interference patterns from low-energy beams of positrons. Their experiment was carried out in 2018 at the L-NESS Laboratory, part of the Polytechnic University of Milan. Using specialised apparatus named a Talbot-Lau interferometer, they first passed positrons produced by a radioactive sodium isotope through a series of collimators, at a rate of 5,000 particles per second. This ensured each particle travelled along exactly the same path, and at the same speed.

Afterwards, the particle waves passed through two successive diffraction gratings, before annihilation within a photographic observation plate. These reactions each generated tiny amounts of damage, which allowed the researchers to pinpoint exactly where on the plate they took place. By ensuring all components of their interferometer were made of suitable materials, and placed in just the right arrangement, Dr Giammarchi’s team produced the very interference patterns they hoped to find.

“This work is the first demonstration of quantum Interferometry for the antiparticle,” says Dr Giammarchi. “It was made by studying the propagation of ‘an-antiparticle-at a-time’ in an interferometric apparatus. It therefore constitutes the first demonstration of interferometric properties of antiparticles and the first observation of the ‘single-antiparticle quantum mechanical mystery’ at work.” The achievement was a significant breakthrough, but for the QUPLAS collaboration, it was only the beginning of a potentially groundbreaking new line of research.

Understanding the universe’s asymmetry
Having demonstrated the clear possibility of single antiparticle interferometry, Dr Giammarchi hopes that the techniques his team have developed could be used to explore the elusive origins of the vast asymmetry between matter and antimatter. Several theories have been put forward so far. Among them is the charge, parity, and time reversal symmetry (CPT) theorem from particle physics, which suggests that antiparticles appear rare because they are actually travelling backwards in time.

Alternatively, some theories predict that the mystery could be solved through an adjustment to the weak equivalence principle (WEP) from general relativity. In its current form, the theorem suggests that matter and antimatter should experience exactly the same gravitational forces. However, any experimentally proven violation to the principle could reveal a crucial oversight in this idea; allowing theorists to build a more accurate picture.

Using the QUPLAS collaboration’s approach to antimatter interferometry, physicists could gain unprecedented opportunities to explore these ideas, and put their hypotheses to the test. Through the experimental discoveries they make, researchers could be a step closer to answering one of the most long-standing mysteries in physics.

How could researchers use your technique to study the CPT theorem and WEP violation?

<> This is a demonstration of antimatter quantum interferometry. Therefore, we have shown that interferometric techniques can be used both for particles and antiparticles, which paves the way to the use of interferometric-grade accuracy in the study of symmetries involving matter and antimatter. 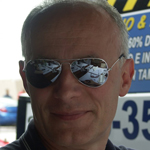 Marco Giammarchi is a Senior Researcher at INFN Milano, author of more than 200 papers in international journals. He got his PhD at Fermilab (USA) in high-energy physics and was one of the founders of the Borexino Solar Neutrino Experiment and of the QUPLAS collaboration for antimatter physics. He holds the Particle Physics course at the Università degli Studi di Milano.

Dr Giammarchi’s research constitutes the first demonstration of interferometric properties of antiparticles and the first observation of the “single-antiparticle quantum mechanical mystery” at work.