Earth & Environment
The recycled paper industry produces tons of waste with resulting disposal costs and environmental impacts. Francesca Bretzel from the Institute of Research on Terrestrial Ecosystems, National Research Council of Italy, and colleagues examined the suitability of de-inked paper sludge (DPS), in pellet form, as a sustainable component of growing media for plants. Their studies include its use in substrates for biodiverse green roofs and as a component of an alternative to peat-based media for urban trees. Linking production of substrates made of DPS with reduced cost of waste disposal could also contribute to a circular economy.

The de-inked paper sludge (DPS) produced worldwide mostly ends up in landfills. Not only does this have a negative effect on the environment by generating gas and leachate, it also means that potentially useful material is lost. DPS has been proposed for use in construction as well as energy and biogas generation. Now, research is demonstrating its value in growing media for green roofs and tree cultivation and in plant nursery substrates, where it can successfully replace peat-based ones.

Peat use is prohibited in many countries because of the threat to habitat and the release of carbon when used as a fuel. The high fibrous content of DPS makes it a promising alternative. DPS also enhances the porosity, water-storage capacity and aeration of growing media. It enables better gas and water exchanges compared with other peat substitutes, such as bark. In addition, the very low nitrogen content of DPS has advantages where low-fertility media (such as for green roofs) are needed. 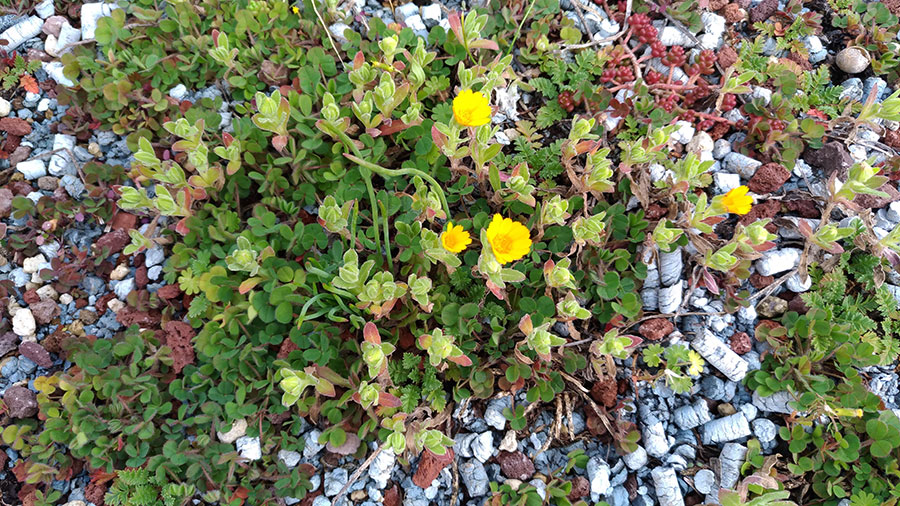 Forming DPS into pellets improves handling and provides low compaction and good stability. Francesca Bretzel and her team at the Institute of Research on Terrestrial Ecosystems, National Research Council in Pisa, use DPS produced near Lucca, Italy, close to a nursery district. This means the waste could be recycled with low transport-related carbon emission and environmental impact. In similar locations where waste from the paper industry can be accessed for nearby nurseries or for urban green infrastructure, this use will enable a circular, more sustainable, economy.

Growing substrates for urban settings
Since urban conditions often cause plant stress, better substrates could help sustain growth both in nurseries and after transplanting. Studies with DPS as a substrate amendment for tree cultivation have previously shown equal or better results when compared with non-sludge media. After promising experiments with DPS in green roof substrates, described later in this article, Bretzel and colleagues examined the potential of pelletised DPS as a component of an alternative to peat-based growing media for trees.

The DPS came from production of recycled tissue paper, generated by mechanical cleaning, without additives – an industrial process producing 48,000 tons of waste annually. In Italy, DPS can be used for environmental purposes, as long as it is within legislated threshold limits for pollutants. The experimental substrate had concentrations below those limits for potential contaminants, including heavy metals and chlorides. When tested using Lepidium sativum L. (Cress) germination, the substrate had no toxicity effects.

The saplings were planted in pots filled with either a commercial control (peat, pumice and zeolite) or the experimental substrate (mature compost from green municipal waste, DPS pellets, pumice and zeolite). After two years in the nursery, the trees were transplanted. The experimental substrate had higher organic carbon, total nitrogen and available water compared to the control. It successfully sustained the growth of trees in pots in the nursery, improved photosynthetic performance and supported their capacity to survive transplant stress.

The results showed that DPS worked well as an amendment in place of peat. The research team is now working on evaluating DPS in peat-free substrates such as coir (coconut fibre), for potted bedding plants, to obtain a commercial substrate.

Substrate for green roofs
Extensive green roofs provide ecological benefits to urban areas, enhancing the plant and animal diversity. Particularly, the use of nutrient-poor substrates limits the plant development and facilitates the coexistence of different plant species. Establishing vegetation on rooftops also has potential as an undisturbed habitat for pollinating insects. Bretzel’s team studied the effects of different growing substrates on Mediterranean vegetation used for green roofs. They included DPS pellets with a view to reducing substrate fertility in order to enable biodiverse plant community to thrive.

Thirty varied species of Mediterranean native herbaceous plants and various types of Sedum were transplanted onto all the substrates. The species chosen belonged to four functional groups (graminoids, forbs, crassulacean acid metabolism and legumes) and four life forms (hemicryptophytes, geophytes, therophytes and chamaephytes). They were able to show that substrate composition affected the plant community cover and variety. Including DPS pellets helped to promote species diversity and hardiness.

Recycled waste materials are often used as substrates for green roofs, where ideal characteristics are light weight, good drainage and stability. The substrates used in this study were a commercial control containing tephra (volcanic substrate) with compost, and two experimental substrates containing (1) tephra, DPS and compost and (2) tephra and DPS. The more DPS included in the substrate, the lower the total nitrogen content. The DPS pellets were found to be stable and consistent. Especially in the absence of compost, they kept their structural integrity over time, which is important for green roofs.

In the control substrate, the compost provided more available water and enabled the plants to grow luxuriantly in the spring. But when the summer heat arrived, many plants suffered on this substrate. The capacity of compost to hold water in rainy periods may cause a substrate to become too heavy for the load-bearing capacity of a roof. This problem can be reduced by including DPS, which will also aid root penetration and aeration.

The green roof substrate containing both DPS and compost proved best in terms of diversity, canopy cover and species composition.

The substrate containing both DPS and compost proved best in terms of diversity, canopy cover and species composition. Although the least fertile substrate (containing DPS and no compost) took longer to recover its vegetation after summer drought, legumes did succeed in colonising the surface. Where this happens, a substrate will probably gradually be modified through root exudates and nitrogen-fixation. Gaps in the vegetation on the least fertile substrate enabled annual seedlings to establish and persist; slow-growing stress tolerant plants were also able to find their place.

In the two experimental substrates where compost was reduced or absent, the availability of water decreased, which reduced development of the plants. However, the presence of different species and functional groups enabled the vegetation to recover after the summer drought. This suggests that plant survival under drought on extensive green roofs is a more a result of reduced biomass development than of leaf succulence.

Sedum species are popular in green infrastructures because of their succulence, crassulacean acid metabolism and propagation ability. However, they create uniform, thick vegetation, discouraging the establishment of any other herbaceous species. In this study, over time, the vegetation shifted towards a simplified plant community of annuals, geophytes and succulents. The absence of irrigation and fertilisation, together with low fertility, also discouraged colonisation by weeds.

The strategies of Mediterranean herbaceous flora that enable them to survive desiccating conditions greatly enhance green roof performance. These include succulence, annual cycle and underground storage organs. Forbs (perennials and annuals) die back in summer and both are effective in the regenerative phase of the vegetation, after stress or disturbance. Perennials spread through vegetative propagation while annuals spread via the persistence of the seed bank, making both successful on green roofs. 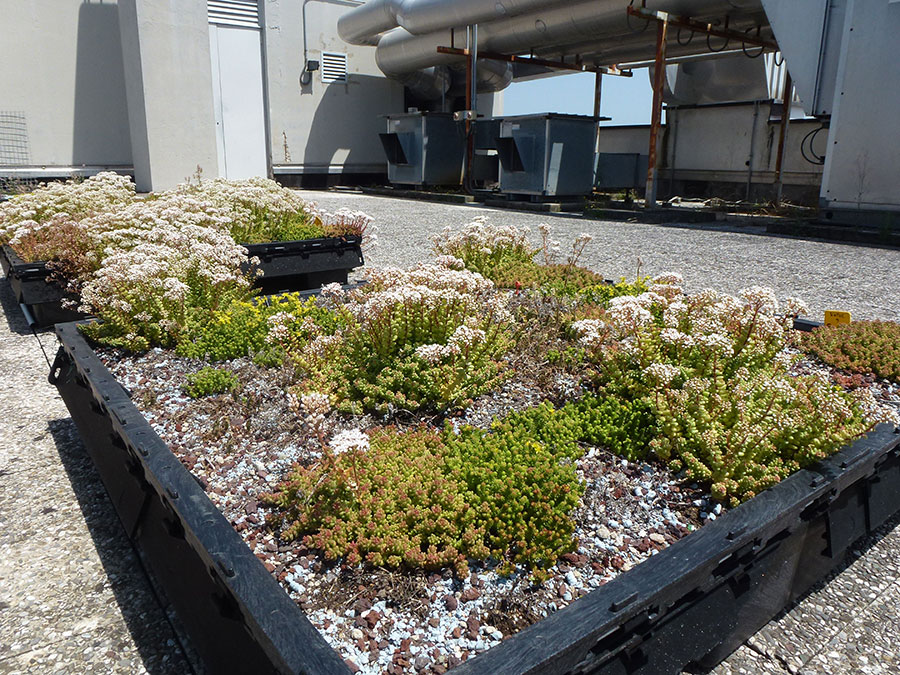 One approach in greening extensive roofs may be to find local ecological models such as the natural vegetation of dry and stressful habitats, and establish them on suitable substrates. The proposed species should always be tested in the harsh roof context to confirm ground-level findings. In a green roof mosaic habitat, all three substrates described here could be used to host different species and, therefore, would together contribute to plant diversity.

More research is needed on the different insect fauna encouraged by different substrates and on ways to extend the flowering season and the associated insects. Long-term monitoring would help to reveal any effects of nitrogen-increase (through atmospheric deposition, nitrogen-fixer plants, microbes, coexistence of plant species) on the least fertile substrate.

Have you been in contact with the recycled paper industry, green infrastructure developers or commercial nurseries?

Yes, the aim of the project was to find solutions for the business activities of the province of Lucca (Italy), where many paper industries are, while in the nearby province of Pistoia 5000 ha are covered by nurseries. The project partnership included a recycled paper factory, a commercial nursery, a pelletisation firm, a producer of tephra and volcanic materials for substrates.

Have they raised any issues that further research should address?

The paper industry has the need to find an inexpensive, if not free solution for the mass of sludge they produce; to find a use for it would mean to hopefully find a business. 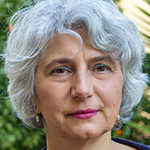 Francesca Bretzel was born in Milan and now lives in Pisa, where she degreed in Agricultural Sciences. She has achieved a MSc in Landscape and Historic Gardens at Versailles, France. Afterwards, Bretzel started her working career at the National Research Council in Pisa, Institute of Research on Terrestrial Ecosystems. Her research interest is related to the dynamics of the soil of urban, degraded and anthropised areas, to the spontaneous and planted vegetation of those areas.