Rodents and lagomorphs form Glires, a group of gnawing mammals with enlarged ever-growing incisors. In the beginning, Glires were neither ‘true’ rodents nor lagomorphs; we call them basal or stem taxa. Species from this incredibly successful group had different heel structures to suit different lifestyles. Fast running or jumping requires different heel shapes compared to slow clambering or climbing. Dr Łucja Fostowicz-Frelik at the Institute of Paleobiology, Polish Academy of Sciences in Warsaw studied fossils from two groups of early rodents collected from the Chinese Gobi Desert. The researcher compared the ankle bones that date from the Eocene to modern forms to assess how these early furry animals lived.

Glires is the general name given to a group of buck-toothed gnawers who appeared on Earth over 60 million years ago in the Paleocene. In the beginning, the group included species that could be assigned neither to rodents nor lagomorphs but shared the characteristics of both groups. Later, the first primitive rodents emerged (Ischyromyidae, a strictly fossil group, and then Ctenodactyloidea, who survived until today, e.g., gundis), followed by Lagomorpha (who would go on to become modern hares, rabbits, and pikas).

Rodents have now become one of the most diverse groups of mammals on the planet. There are over 2,500 species with varying lifestyles – from acrobatic flying squirrels to bumbling semi-aquatic beavers. Dr Łucja Fostowicz-Frelik and her colleagues specialise in comparing the shape of fossils of different species within the Glires clade to assess who is most related to who and what kind of life they have lived. This type of study is called comparative and functional morphology.

The first clues of diversification in Asia
The earliest Glires fossils ever were found in China. If you ask an expert of early Glires to tell you what a particular animal looked like, they will probably ask to see its teeth and fossilised heel bone. They will examine the leg bones, especially these forming the ankle joint where the tibia (and sometimes the fibula) meets the anklebones (the astragalus and in case of the fibula, the calcaneus), to determine if the foot appears to be free to go from side to side or if it is locked in place with extra nobbles of bone (well-developed calcaneofibular articulation on the crurotarsal joint). The joints that are locked in place are likely to be from the rabbity gang (lagomorphs). This shape allows them to put more force on the joint without risking the rabbit equivalent of a sprained ankle. The early protorodents (Ischyromyidae) as well as the earliest rodents of the Ctenodactyloidea lineage were initially more generalist with heels to match.

There are over 2,500 rodent species with varying lifestyles – from acrobatic flying squirrels to bumbling semi-aquatic beavers.

Since a strong, locked-in heel is useful if you want to be fast, individuals with this feature had a vital survival advantage in open habitats. Many unrelated groups, including some ungulates (hoofed mammals), evolved this trait independently (convergent evolution). This even happened in the same place at the same time in different groups (parallel evolution). It is fascinating to see the same solutions to life’s challenges popping up in unrelated groups but, of course, devilishly difficult to untangle for researchers studying evolutionary morphology. Species may resemble each other not because they are related but because they have evolved the same solution to their environment.

The Glires appear to have expanded their range into North America and then across a land bridge to Europe. Actually, the first true rodents appeared first in North America (latest Paleocene), which is a paradox since the earliest Glires (called the stem taxa) are in Asia. The Gobi Desert, an area spanning over 1,000 miles across China and Mongolia, has multiple famous study sites with a complex fossil assemblage of different mammal species. Dr Fostowicz-Frelik and her colleagues at the Institute of Paleobiology PAS have collaborated with Professors Qian Li and Xijun Ni of the Chinese Academy of Sciences in Beijing to study the mammals that lived here.

The Chinese terrestrial fauna of the Cenozoic era
The Erlian Basin has been studied since the early 1920s. It is situated in the Gobi Desert in Nei Mongol (Inner Mongolia), Northern China. The terrain is dry, with little vegetation, and looks very hostile at first glance. Nevertheless, it is a fascinating study site since it has exposed rocks from most of the Cenozoic era (the most recent geological era from 66 million years ago to the present day). Since the fossils are loose in the surface soils, finding whole skeletons is pretty much unheard of, but jawbones or feet bones are reasonably common. Luckily, both have features that can tell us much, and these fossils can be found by simply sifting through surface soil samples. This site has given us many mammal fossils, the earliest of which are from the latest Paleocene (over 56 million years ago).

Early Tamquammys in the Erlian Basin
One of the first groups of rodents to appear in the Erlian Basin were Ctenodactyloidea. Among them, rodents from the Tamquammys genus quickly became the most common small mammals in the area and dominated this small mammal community in number and range. Dr Fostowicz-Frelik and collaborators decided to study a couple of Tamquammys species that were alive at about the time when rodents started to diversify into modern lineages for the first time. The researchers wanted to find out if these species had already specialised or if they were still relative generalists sharing more features with primitive forms. What kind of life were they living?

The two species examined were Tamquammys wilsoni and the slightly larger Tamquammys robustus. Twenty-seven different linear measurements were taken from part of the heel (the astragalocalcaneal complex). Through principal component analysis, data from different specimens and/or species were plotted on the same graphs to determine any trends or clustering that might not be apparent from the first inspection. In this study, measurements from the two Tamquammys species were compared with other fossil forms from the area and living rodents like mice and marmots.

It was found that both Tamquammys species had relatively narrow bones and a fairly generalist heel structure. The smaller Tamquammys wilsoni showed some adaptations to climbing, and the researchers infer that it had a similarly agile habit to modern rats or dormice. The larger Tamquammys robustus seemed to be more suited to ground living similar to rock squirrels. In sum, the researchers determined that both species were still living a relatively generalist life in the Erlian Basin.

Ischyromyidae were highly diverse and numerous in North America at this time, with some specialised for climbing and others for digging.

Larger Ischyromyidae species from the Erlian Basin
Later on, in the early middle Eocene, there appears to have been a general diversification of many groups, including the Ctenodactyloidea. This diversification included a resurgence of another early rodent group (the Ischyromyidae) that were generally larger, with molars often longer than 4mm. Dr Fostowicz-Frelik and her collaborators decided to investigate the heel design of three species of Ischyromyidae.

Ischyromyidae were highly diverse and numerous in North America at this time, with some specialised for climbing and others for digging. In contrast to Tamquammys, Ischyromyidae did not populate Europe or Asia in huge numbers. The teeth of the three species studied were very similar, which indicated that this group may have been very homogenous.

However, the researchers found that the heel features from the study site in Inner Mongolia were markedly different from the forms (ecomorphotypes) in North America. Two of the three species studied had heels that were best designed for rather slow ambling or walking (imagine a porcupine or a coypu), while the third might have been quicker and more agile (similar to a ground squirrel).

A hop skip and a jump, or a slow amble?
It seems there is a trade-off between speed and manoeuvrability. This large and diverse group of Glires have travelled a long way in distance, shape, and lifestyle. There are now climbers, hoppers, runners, and those who mostly amble. Their story is long and complex, but if you want to track their movements, grab an electronic caliper and start measuring their heels!

Has the vegetation in the Erlian Basin changed much during the Cenozoic, or has it always been a desert?

The Paleogene vegetation was different from what it is now. In the late Cretaceous and Paleogene (the latter was the time when Tamquammys and Ischyromyidae lived), this area was covered by forests interspersed with more open landscapes. It was not a desert but was supplied by a relatively dense river network.

What is your next challenge?

I am studying the evolution of early Glires in a broad sense, thus every aspect of their biology that can be inferred from the fossil record interests me. The most immediate topic would be a closer look at the lagomorph foot structure and that of closely related taxa which exhibit similar adaptations (technically, the presence of the calcaneofibular facet) but are not included into lagomorph clade. We plan to employ more sophisticated analytical methods, such as 3D morphometrics and finite element method.

Look at those feet! Early evolution of rodents and lagomorphs was last modified: February 7th, 2022 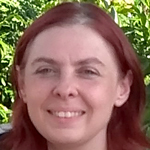 Łucja Fostowicz-Frelik is a vertebrate paleontologist and evolutionary biologist working on placental mammals, Glires (lagomorphs, rodents and their kin) in particular. She is an Institute Professor at the Institute of Paleobiology, Polish Academy of Sciences, Warsaw, Poland and head of the Evolutionary Morphology of Mammals Lab (EMoM).

Dr Fostowicz-Frelik investigated the locomotor adaptations in two different rodent lineages: the most primitive Ischyromyidae and Ctenodactyloidea, one of the earliest groups of modern rodents.