Health & Medicine
Dr Heiko Enderling from Moffitt Cancer Center, together with researchers from the Polish Academy of Sciences and the Helmholtz Centre for Infection Research, focus on Mathematical Oncology, and radiotherapy in particular, highlighted by the interconnectivity of metastatic disease through a patient’s immune system. Studies show that different radiation doses induce anti-tumour immunity at different strengths. This prompted the research team to develop a variety of mathematical models to calculate the best radiation protocols and optimum timing of treatment in their quest to maximally synergise radiation-induced cell death and the subsequent waves of immune responses.

More than half of cancer patients receive radiation treatment at some point during their care. Radiation therapy is prescribed more often than any other oncology treatment.

Current radiation protocols
Currently, radiation treatment involves delivering the maximum tolerable doses to patients. This protocol was established after many dose escalation trials in order to increase average survival rates. Unfortunately, patients’ side effects can include severe radiation toxicities. Radiation, however, is also thought to boost the immune system to help fight cancer. Research suggests that the success of radiotherapy treatment could well be a combination of killing tumour cells by direct cytotoxicity, and maybe even more importantly, its anti-tumour immunity effect. Current radiation protocols do not focus on enhancing these immune responses. Research studies have shown that various radiation doses stimulate anti-tumour immunity at different rates. This has led researchers to search for the best possible radiation dose and dose fractionation to optimise the amalgamation of cell death by direct radiation cytotoxicity and the ensuing anti-tumour immune responses.

Dr Heiko Enderling and Dr Rachel Howard from the Department of Integrated Mathematical Oncology at H. Lee Moffitt Cancer Center & Research Institute, Florida, together with Dr Jan Poleszczuk from the Polish Academy of Sciences, Poland and Dr Juan Carlos Lopez Alfonso from the Helmholtz Centre for Infection Research, Germany, are integrating mathematical, biological, and clinical sciences to model, simulate, and predict treatment response for individual patients. They have developed a variety of mathematical models to calculate the best radiation protocols and optimum timing of treatment. Their work is at the forefront of ‘virtual trials’ to personalise cancer treatment in order to provide optimal adaptive cancer therapy for each patient.

Metastatic cancer
The researchers have observed patients with metastatic cancer. This is where the cancer cells have spread from the place where they first formed to another part of the body. The cancer cells break away from the initial tumour and travel through the blood or lymph system, forming a new tumour in another location. This new, metastatic tumour is the same type of cancer as the original tumour although it is located in a different place. Dr Enderling and his team have studied the response of tumours outside of the radiation field, known as the Abscopal Effect. In patients with metastatic disease, the irradiation of a single tumour site causes regression of tumours elsewhere in the patient body as well. As Dr Enderling explains: “This highlights the interconnectivity of metastatic disease through the patient’s immune system, and local therapy such as radiotherapy, or even surgery, changes the number of immune cells within the treatment field. Some of the immune cells are killed while others are stimulated. These changes will manifest systemically as the immune system is body-wide.” These exciting observations have prompted the research team to depart from the concept of ‘local therapy’ in order to develop their understanding of radiation as a biological agent that acts on the entire body.

The researchers’ work shows that in metastatic disease, tumours in different parts of the body participate differently in immune surveillance. Most intriguingly, the interdependence of different cancers in a patient’s body through the immune system is challenging our current understanding of cancer metastases. The traditional belief that tumours metastasise when they are big may not always be accurate. Rather, some tumours may be big because they have metastasised. If tumours with a strong immune response shed metastases throughout the body, some cells of the immune system will be re-routed to the distant metastases. This divide-and-conquer strategy will allow for escape from immune-mediated tumour control. Dr Enderling and his team therefore need to identify the best radiation treatment target so as to induce systemic responses and kill the tumours that were not directly targeted by radiation.

Mathematical modelling approach
Radiation is often prescribed with other therapies such as surgery, chemotherapy, targeted agents and immunotherapy. The vast number of possible radiation doses together with the different combinations of various therapies, in various orders, at various times for patients with metastatic diseases render it impossible to experimentally and clinically test all the possible permutations. The researchers’ mathematical modelling approaches use the available preclinical data and outcomes from clinical studies to simulate all possible permutations of treatment protocols. Dr Enderling and his team are using machine learning and optimisation theory concepts to help identify those treatment approaches with the highest likelihood of success. These treatments can then be put forward for subsequent experimental and clinical validation.

More than half of cancer patients receive radiation treatment at some point during their care.

The research team have developed a mathematical model that simulates radiation response, radiation-induced immune activation, immune checkpoint blockade therapy and inter-exchange of activated T cells (a type of white blood cell that kills cancer cells) between tumour sites. This model differs from the theoretical constructs of predator-prey systems that have gone before.

The new model is first compared to experimental data. Based on the experimental setting, tumour sites are modelled at different spatially-separated locations and each one is characterised by a time-dependent volume. At each site, the researchers add data of four co-existing and interacting populations: (1) viable cancer cells, (2) cancer cells dying in a non-immunogenic manner, (3) cancer cells dying in an immunogenic manner and (4) activated tumour-specific cytotoxic T cells (effector cells). This data-fitting procedure allows the researchers to estimate the model parameters. These are then used to predict responses to those dosages that have not already been considered in the experimental setting.

Complex interactions occur between tumours and the patient’s immune system, the outcomes of which can range from tumour eradication to tumour-immune co-existence (or dormancy) and rapid outgrowth of the cancer cell population. This issue becomes more complex when we learn that cytotoxic T cells can move through the patient’s circulatory system. Dr Enderling and his team have coupled mathematical models of local tumour-immune dynamics and systemic T cell trafficking in order to simulate the evolution of tumour and immune cell populations following local radiation and model the immune interconnectivity. Their results suggest that the presence of a second tumour may either inhibit or promote the growth of the original tumour, depending on their capacity for immune recruitment and the resulting systemic redistribution of T cells. The researchers are able to model the effects of treatment such as surgical resection and radiotherapy to estimate both the decrease in the original tumour volume and the change in the overall tumour burden. The model provided qualitatively similar responses to those reported in the clinical setting. It would also suggest that if metastatic sites are interconnected through the patient’s immune system, truly local therapy does not exist.

Mathematical oncology
The numerous clinically feasible radiation doses and dose fractionations render an exhaustive pre-clinical evaluation impossible. Progress in integrated mathematical oncology, however, may make such analyses possible. Dr Enderling and his research team are introducing novel mathematical models which are calibrated with experimental data in order to make inroads into deciphering the complexity of radiation and immune system synergy. The model estimates the optimal number of radiation fractions and radiation dose per fraction to obtain the most beneficial systemic immune-mediated tumour responses for clinically relevant total and biologically effective radiation doses. This will enable a departure from the current protocol of giving patients the maximum tolerable doses, a one-size-fits-all approach, and instead provide patient-specific precision radiation therapy and move towards personalised medicine.

Their work is at the forefront of ‘virtual trials’ to personalise cancer treatment in order to provide optimal adaptive cancer therapy for each patient.

Discussion
The ground-breaking model simulations are trained on specific experimental datasets in order to highlight the treatment that will have the highest likelihood of success. Importantly, this may contribute to the eradication of the tumour targeted by the radiation, as well as those tumours and individual cancer cells outside the radiation field through activation of systemic immunity.

Dr Enderling’s team have found their model simulations making predictions suggesting that conventional radiation schemas may not be able to obtain strong immune-mediated tumour responses. It is plausible that systemic responses would be especially important for metastatic patients with lymph node involvement, circulating tumour cells or subclinical or undiagnosed metastatic deposits. This will add a further layer of complexity to the modelling so the researchers can balance the different biological consequences of radiation therapy in order to induce maximum cell killing, while sparing immune cells and maximising subsequent radiation-induced immunity.

The researchers are aware that their results to date may be biased by the experimental data that they have used for model calibration. To further develop the model, they will be examining more complex metastatic disease distributions, comprising combinations of tumours in different organs, using the proposed framework. Nevertheless, their work so far provides the quantitative foundations to evaluate radiation fractionation protocols in order to induce immune-mediated systemic anti-tumour responses. With the continuously increasing number of clinical trials combining radiation and various forms of immunotherapy, this model could become an invaluable tool for evaluating clinical responses. Excitingly, it could also be employed to help design subsequent clinical protocols and, eventually, support individual patient treatment planning, providing quantitative personalised oncology.

What is your next move towards providing optimal adaptive cancer therapy for individual patients?

<>Our mathematical models generate a number of very exciting hypotheses. The next step is to validate mathematical predictions experimentally and ultimately clinically. We have designed intriguing experiments together with our colleagues in cell biology, cancer immunology, radiation biology, and radiation oncology to fully decipher the complex, adaptive dynamics of cancers when confronted with an immune response before, during and after radiation therapy. We have begun to amend ongoing clinical trials to specifically collect biological specimens from biopsies, surgery and blood draws during the long treatment course. These samples will be analysed for the role of all participating players in the tumour-immune ecosystem, and how such roles and interactions might change over time. Then, we might be able to prescribe radiation not only to kill as many cancer cells as possible, but also with the intent to activate robust immune responses to help fight the tumour.

Towards a quantitative personalised oncology was last modified: May 29th, 2019 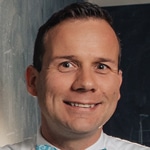 Dr Enderling received his PhD in Mathematical Biology from the University of Dundee before taking up position of Postdoctoral Researcher at Dundee and then Postdoctoral Fellow at Tufts University School of Medicine. He is currently an Associate Member of the Integrated Mathematical Oncology Department at Moffitt Cancer Center, where his research interests lie in developing patient-specific optimal cancer treatments.