Malaria, a life-threatening mosquito-borne disease, is a leading cause of death and infection in many developing countries. Using mathematical modelling, Professor Wandi Ding, Middle Tennessee State University, USA, and her colleagues investigate optimal control of malaria, using both the sterile insect technique and insecticide-treated nets. Their simulations show that a combination of both strategies results in a more rapid elimination of the wild mosquito population, offering a cost-effective way of suppressing malaria transmission.

Malaria, a serious mosquito-borne disease, is a primary cause of death and infection in many developing countries, particularly in the African region. Approximately 229 million cases occurred worldwide in 2019; of those 409,000 people died. Several approaches to controlling and preventing the transmission of infection have been investigated. Vector targeted intervention, including insecticide-treated bed nets and indoor residual sprays, have been employed with some success in many regions. Long-term spraying of chemically based insecticide, however, has resulted in the emergence of insecticide-resistant malaria parasites, reducing the effectiveness of these measures. The first malaria vaccine was introduced in Africa during 2019 but it only decreases malaria cases in young children and its effectiveness is limited.

Researchers are trialling biological methods to control the mosquito population. Techniques include genetic approaches, sterile-insect technique, and the use of Wolbachia. Wolbachia is an intracellular bacterium that infects arthropods including mosquitos, inhibits their development, and reduces their lifespan. It is introduced to mosquitos in the laboratory that are then released and infect others. Mathematical models are employed to measure the usefulness and effectiveness of these suppression techniques.

The simultaneous use of multiple methods appears promising, but there is still much work to be done. Questions remain around how to model malaria transmission linked to the release of sterile mosquitoes, and the effects of combining the sterile-insect technique with insecticide-treated bed nets. These knowledge gaps are currently being filled by Professor Wandi Ding at the Department of Mathematical Sciences at Middle Tennessee State University, and collaborators Liming Cai (Xinyang Normal University), Lanjing Bao (Georgia Gwinnett College), Logan Rose (Marshall University), and Jeffery Summers (Middle Tennessee State University). Their mathematical modelling of malaria includes an investigation into optimal control using the sterile-insect technique together with insecticide-treated nets.

Humans who have caught malaria and recovered possess some immunity to the disease.

Sterile-insect technique
An environmentally friendly approach to controlling mosquito populations, the sterile-insect technique involves the mass-rearing and sterilisation of male mosquitoes, using either radiological or chemical means, before releasing them into the environment to mate with wild mosquitoes. The females that mate with these sterile males will either not produce eggs, or their eggs will not hatch. Research demonstrates that releasing sterile mosquitos is effective in the suppression of wild mosquito populations. Mathematical modelling reveals the complex dynamics of interactive mosquito populations resulting from the use of a variety of sterile-mosquito release strategies.

The economic burden of malaria
Many of the at-risk populations living in the malaria regions are situated in remote areas and are exceptionally poor. It is unlikely that these destitute families living in rural areas will have access to the basic preventative measures that can control malaria. The disease brings with it a massive economic burden and cost African countries more than $12 billion each year. Furthermore, the sterile-insect technique depends on sterilising large numbers of male mosquitoes and the construction and operation of these radiation facilities are expensive. Modelling malaria control therefore must take limited resources into account.

A malaria transmission model with SEIR and SEI
Ding describes their malaria transmission model where the human population is divided into SEIR (susceptible/exposed/infected/recovered) classes. Only female mosquitos bite people and transmit malaria, so the total population of wild female mosquitoes is divided into SEI (susceptible/exposed/infected) classes. The infection period is normally longer than the mosquitos’ lifespan, so recovered mosquitoes are not included. An additional class is added to the model for the sterile mosquitoes being released into the environment.

Immunity is a significant interconnecting factor for the transmission of malaria, and a review of the literature showed that when immunity has been ignored in previous research the models produced unrealistic estimates. Humans who have caught malaria and recovered possess some immunity to the disease. They will still have the parasite in their bloodstream, albeit at a low level, meaning that they can pass malaria to mosquitoes. Ding’s model includes the probability of infection being transmitted from susceptible, infected, and recovered humans to mosquitoes.

To achieve the beneficial effect, the design of sterile-male release programmes must account for the ecology, behaviour, and life history of mosquitoes.

An optimal control problem
Ding and colleagues calculate the basic reproduction number for the baseline model, that is the number of cases they expect to be generated directly from a single case in the population. They then frame an optimal control problem grounded on their baseline malaria model, with the aim of minimising the number of infected humans together with the cost of implementing both strategies to reduce the malaria transmission: the release of sterile mosquitoes and the use of insecticide-treated nets. Optimal control theory is part of mathematical optimisation that focuses on finding a control policy for a dynamical system that will optimise the objective function, in this case minimising both the infected human population and the cost.

Reformulating the model with two control variables
Ding’s team add two control variables to the model: the insecticide-treated bed net coverage, and the release rate of sterile mosquitoes. While many mosquito species feed on blood at night, even 100% bed net coverage will not eradicate transmission of malaria, but the bed nets still have to be maintained or replaced over time. Reformulating the model with these two controls enables the researchers to establish optimal malaria-control strategies.

The researchers modelled several scenarios simulating human, wild, and sterile mosquito population dynamics using both controls and using each control separately. They quantified the effectiveness of the interventions to establish the optimal control strategies for each circumstance. Only releasing sterile mosquitos effectively reduces the wild mosquito population, but it is less efficient at decreasing the infected human population. On the other hand, only using bed nets can substantially reduce the infected human population, but there will be many more susceptible wild mosquitoes. The numerical simulations show that a combination of both strategies results in a more rapid elimination of the wild mosquito population, offering a cost-effective way of suppressing malaria transmission.

Ding notes that ‘to achieve the beneficial effect, the design of sterile-male release programmes must account for the ecology, behaviour, and life history of mosquitoes’. For instance, Release of Insects carrying a Dominant Lethal (RIDL) technology, which releases insects carrying a dominant lethal gene that kills the offspring before they mature. The RIDL system, like the sterile-insect technique, optimises all phases of the control programme to maximise public health benefits. The researchers also describe how the release strategy can significantly affect the control effort’s performance, and release strategies involving the release of only adult mosquitoes, only pupae, or a combination of both, can be effective tactics for achieving long-term suppression of a wild mosquito population in different circumstances. The research team plan to investigate these strategies in the future.

What has been the most rewarding outcome of this research so far?
It is very rewarding to see how mathematics, in particular dynamical system and optimal control, can help to model and design ‘optimal’ malaria control strategies. All the students on this project were undergraduates, their passion and curiosity are behind the discovery and the entire collaboration. Researchers across the US and China have worked together to generate this nice result, which has been a great learning experience for everyone with very diverse backgrounds. 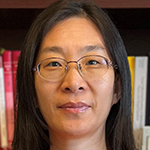 Dr Ding received her PhD in applied mathematics from the University of Tennessee, Knoxville. She is a professor in the Department of Mathematical Sciences at Middle Tennessee State University. She serves as faculty for the Interdisciplinary PhD in Computational and Data Sciences Program, as well as the Honors College.

Professor Ding’s research focuses on understanding the spatial and temporal patterns that arise in dynamic biological systems and, when possible, finding the best way to control the system.